‘Where billionaires go to get away from millionaires’: Inside Mandarin Oriental’s little-known £95m resort on the island where Prince Harry and Donald Trump have stayed

What do billionaires expect when they go on holiday?

Well, after spending four days at the five-star Mandarin Oriental hotel on the little-known Caribbean island of Canouan, I surmised that it must be peace and quiet, flawless service and no qualms over cocktails costing $24.

The £95 million ($120 million) resort is nestled on the 3.5-mile-long outcrop in St Vincent & the Grenadines, which is known as the place where ‘billionaires go to get away from the millionaires’. Past holidaymakers including Robert Downey Jr, Bill Gates, Prince Harry and Donald Trump. 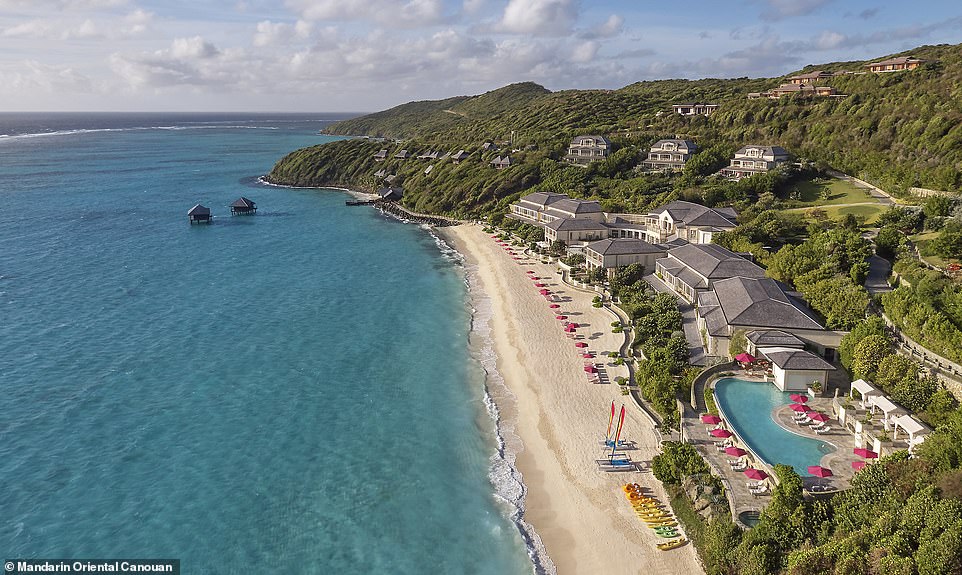 MailOnline Travel’s Sadie Whitelocks checked into the Mandarin Oriental Canouan in the Caribbean. In total, there are 26 private suites and 13 luxury villas at the hotel 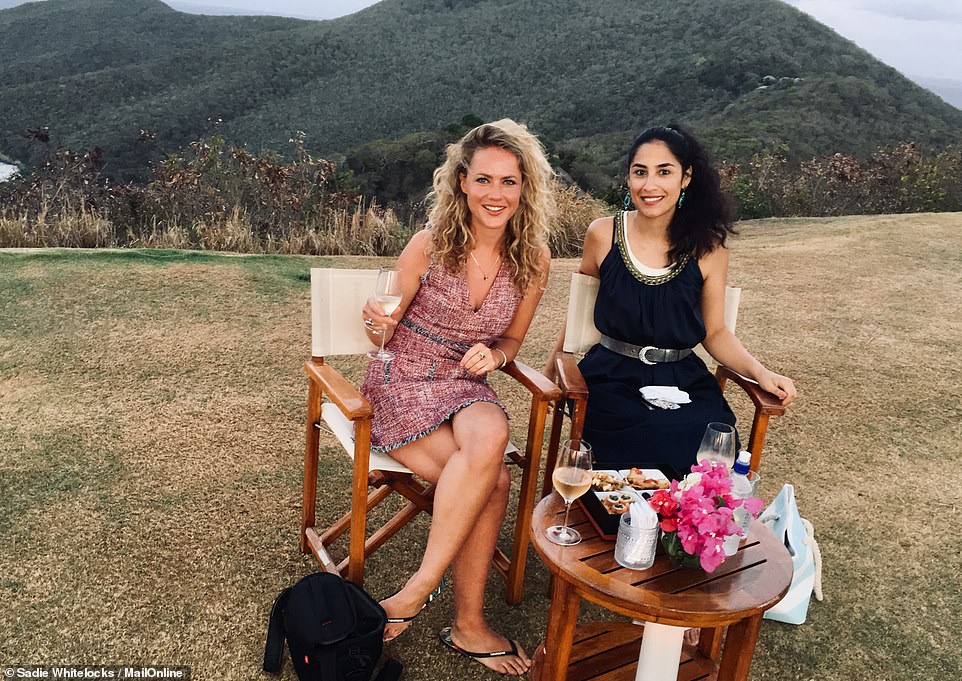 I was informed by the Mandarin Oriental Canouan’s general manager, Duarte Correia, that most guests who check in arrive in their own planes and at Christmas, there were 30 private jets parked on the runway.

In total, there are 26 private suites and 13 luxury villas at the hotel.

Alas, with no private jet of my own, I took a local charter flight from Barbados to Canouan, which took around an hour.

From landing at the dinky airport, my friend Aysha and I soon got a flavour for the luxury holiday we were about to experience with a driver waiting for us, unloading our luggage and inviting us into an air-conditioned vehicle. 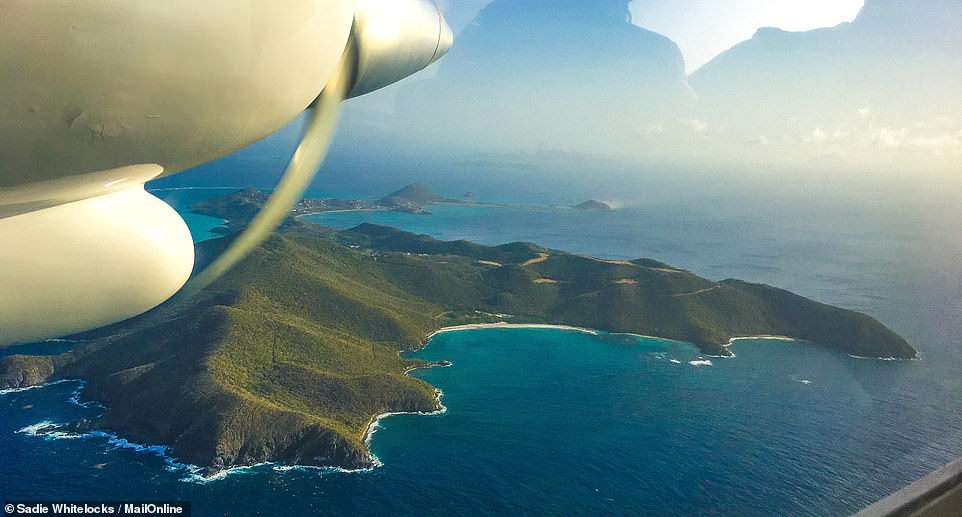 Sadie arrived at Canouan via a local charter flight from Barbados, which took around an hour. Sadie took this picture of Canouan as it came into land 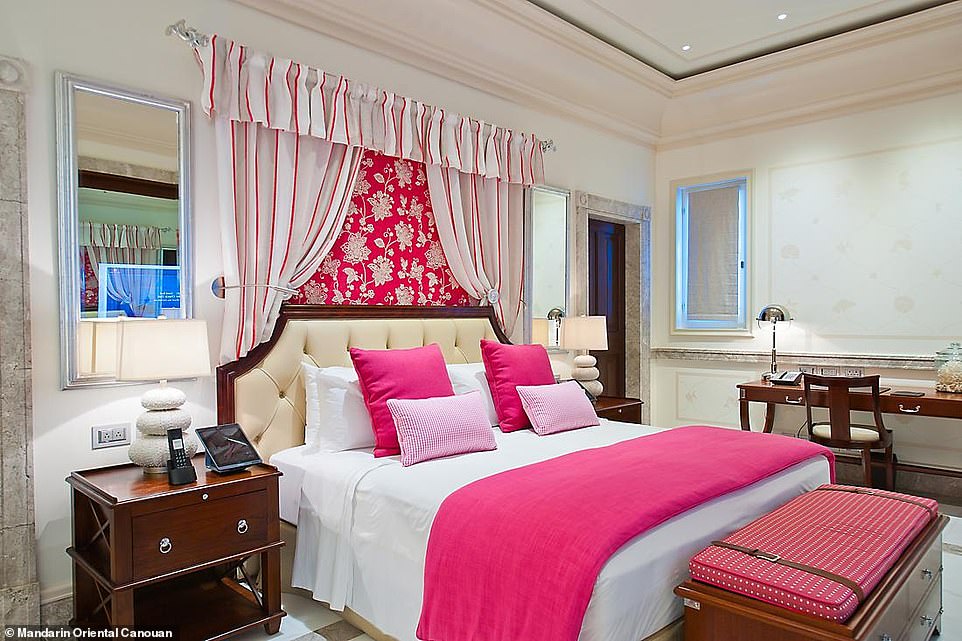 After arriving at the Mandarin Oriental Canouan, Sadie was directed to room 104, a one-bedroom beachfront suite in the ‘Utopia’ wing. Pictured is what the suite looks like with a double bed configuration. It was arranged with twin beds for Sadie and her friend 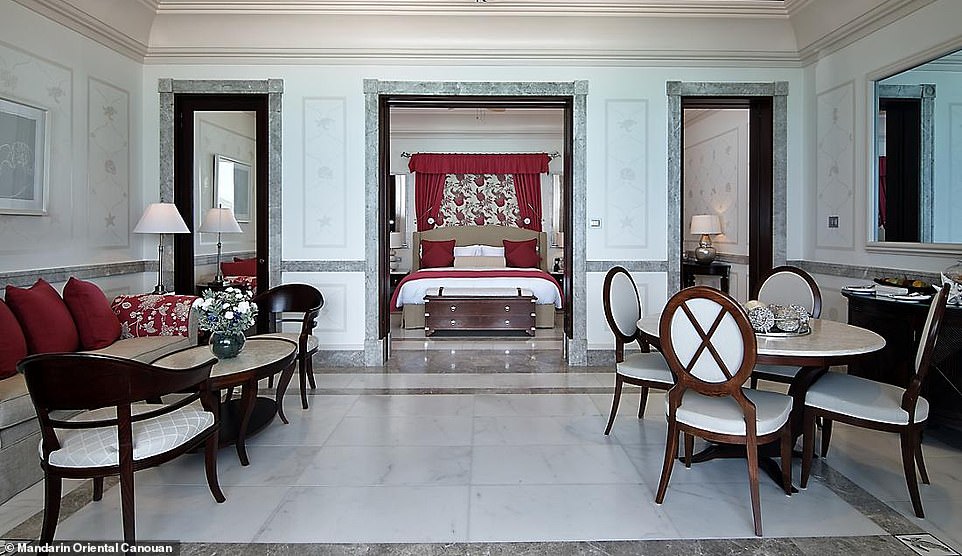 Handy: A sliding central door between the living room area and the bedroom can be pulled back to allow guests views of the sea from bed 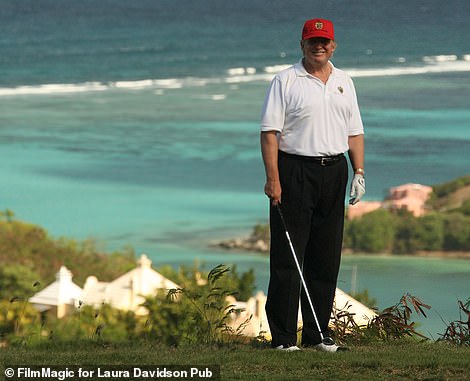 After winding through colourful villages peppering the island of Canouan, and weaving to avoid cows, goats and chirpy dogs as we went, we entered the gated Mandarin Oriental property.

It had a paradisaical feel, with manicured gardens in full bloom and fruit punch cocktails waiting to greet us on arrival.

After polishing off our fruit punch cocktails, we were directed to room 104, a one-bedroom beachfront suite in the ‘Utopia’ wing. 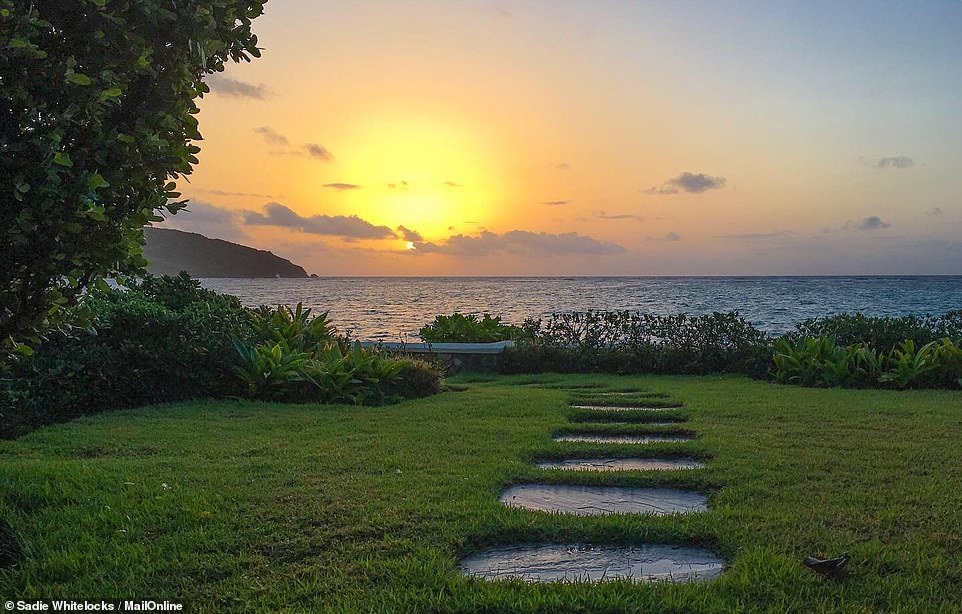 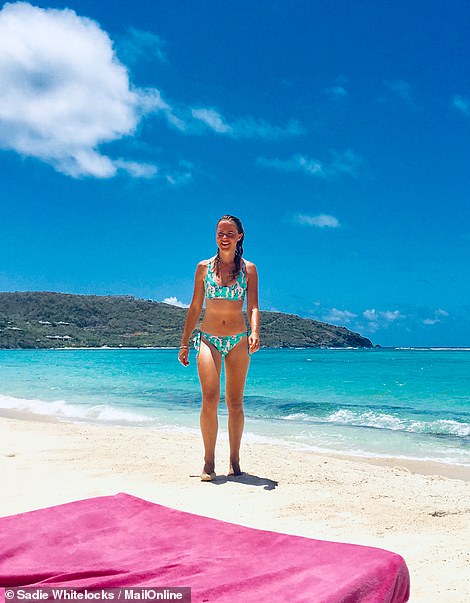 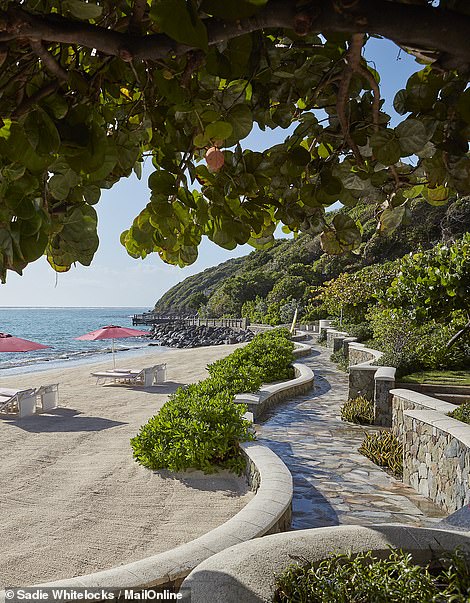 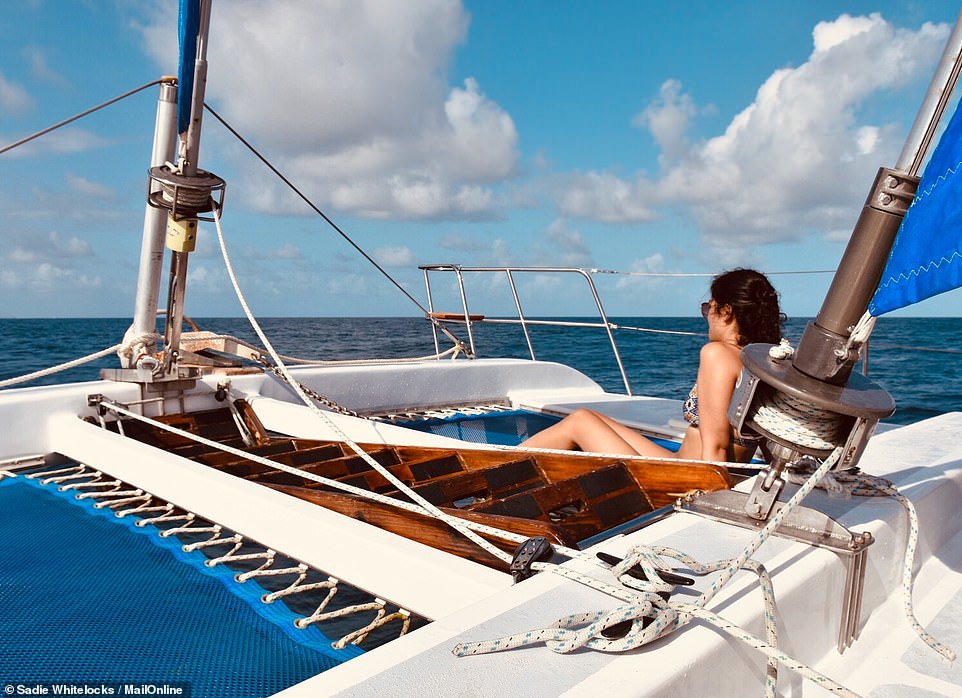 The hotel’s catamaran, which is on call at the resort to take guests to Tobago Cays to snorkel with green turtles

The suite was extremely spacious with a palatial living room, conservatory-style garden room, a large twin bedroom, mirrored dressing room and a marble-clad bathroom complete with a deep tub and shower.

There was also a fully-stocked pantry decked out with a hot drinks machine, complimentary snacks and soft drinks.

We went for a stroll – the sparkling property was eerily quiet.

The blindingly white beach was pretty much deserted, my footsteps echoed in the spotless corridors and I felt bad for Aysha, who had no option for company but me.

The general manager informed me that this is what his cash-rich clients love about the place.

He mused: ‘These people have such busy and hectic lives, they just want to come here, chill and relax.’ 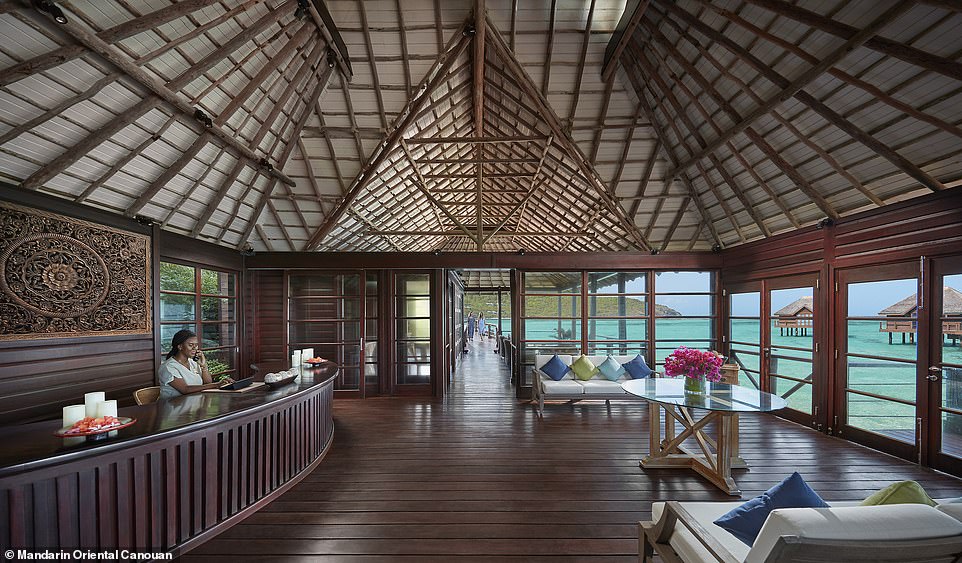 A view of the spa at the beach resort, where guests can have treatments while listening to the lapping of the sea 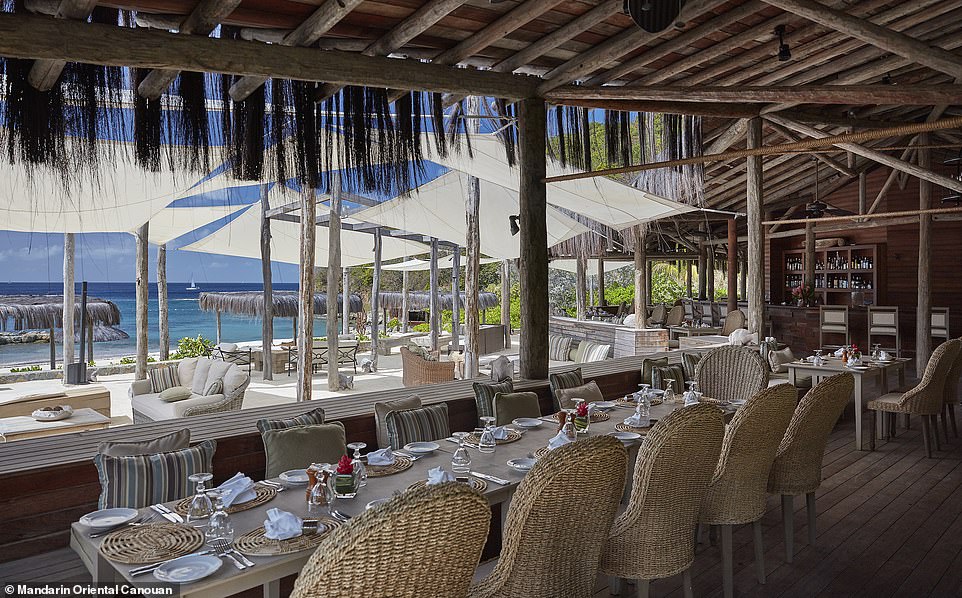 There are five restaurants at the Mandarin Oriental Canouan and four more dotted around the estate it sits on. Above, a view from the L’Ance Guyac Beach Club 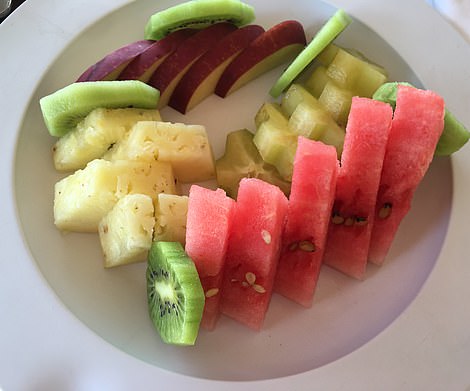 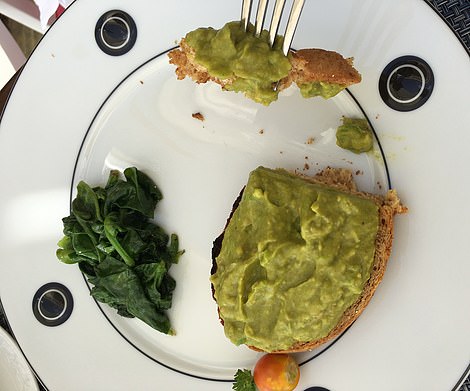 There is lots of deliciously-sweet fruit on offer at the Mandarin Oriental Canouan, left. For breakfast, there is a buffet or an a la carte offering. Sadie’s friend Aysha opted for avocado toast one morning, right 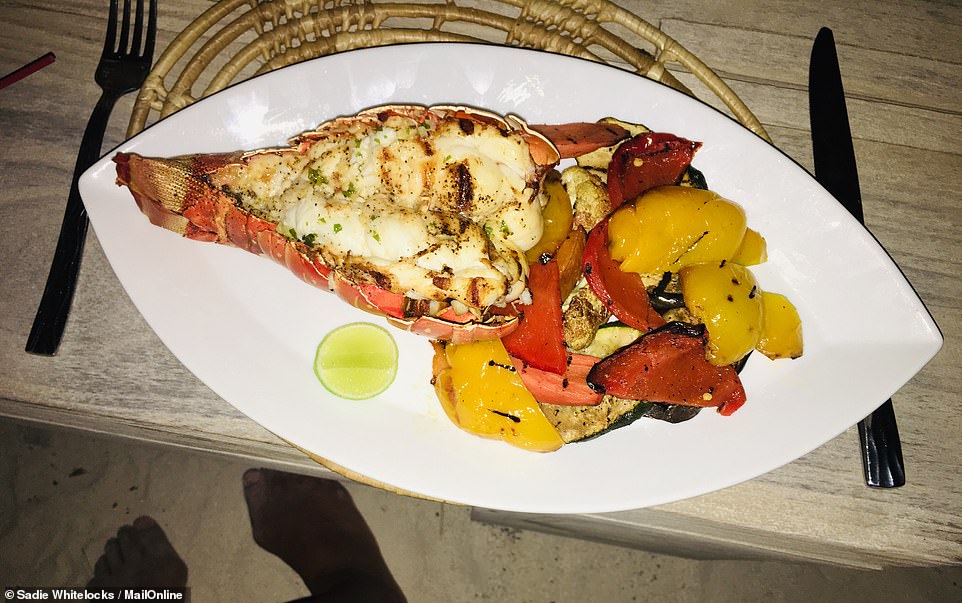 felt the menus catered to CEOs who like their power food. There was plenty of lobster (pictured) and steak on offer, but little in the way of salad (except for fruit)

On the food front, there are five restaurants at the Mandarin Oriental Canouan and four more dotted around the estate it sits on.

We were on a full board package with the eateries rotating daily.

I felt the menus catered to CEOs who like their power food. There was plenty of lobster and steak on offer, but little in the way of salad (except for fruit).

One night we resorted to ordering a smattering of side dishes, including carrots and broccoli, in a bid to boost our vitamin intake.

After four nights at the Mandarin Oriental Canouan I was feeling pretty splendid – despite a sunburned backside. 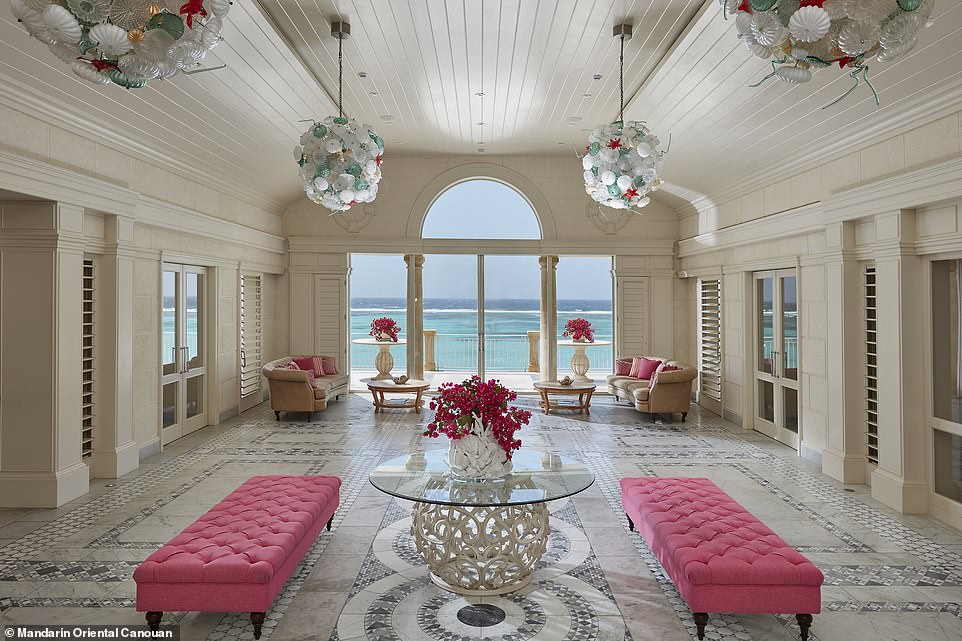 Sadie says the main hotel building, completed in 2016, exudes a classical Italian style. The interiors are decked out with grand pillars, polished floors, swathes of marble and there are mirrors in abundance. Above, the hotel lobby 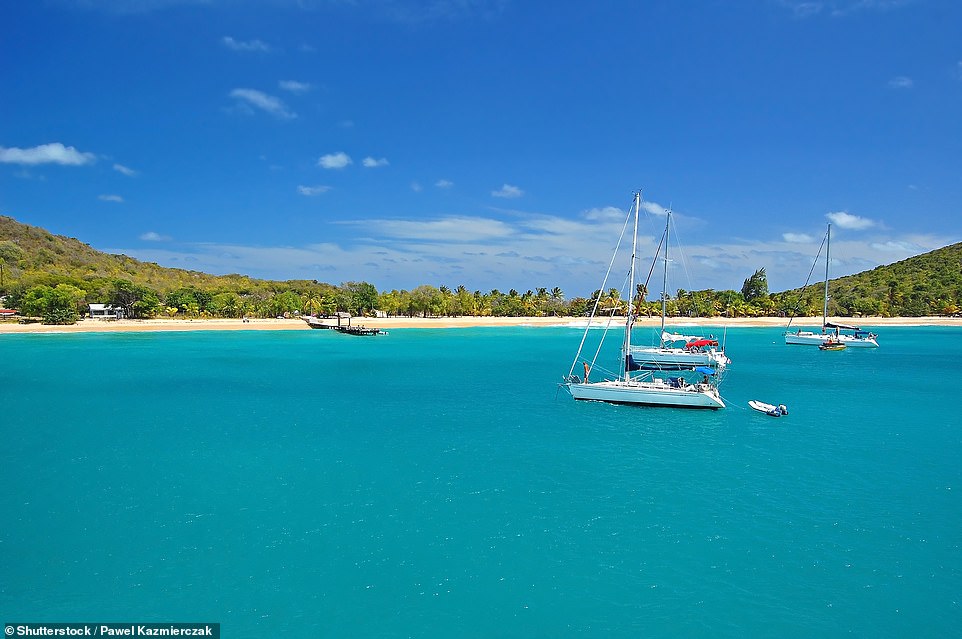 Canouan, which in Carib means ‘Island of Turtles’, has 52 miles of coastline and is generally acknowledged as a scuba’s diver’s dream

They say money doesn’t buy happiness but at the Mandarin Oriental Canouan it gets you one step closer. There’s an infectious sense of zen about the place.

Well, the salt and pepper grinders didn’t seem to grind and one evening I took them apart in a bid to get a snippet of seasoning.

There was also no sound system in the room (I guess to keep the peace!) and I resorted to using the solid marble toilet dustbin as an amplifier for my phone speaker.

Also, to my annoyance, there were three iPads in our suite to control the lighting and use as an interface to explore the hotel.

Give me old fashioned light switches and a compass any day…

Sadie was hosted by luxury travel company Elegant Resorts, which offers seven nights for the price of six at the Mandarin Oriental Canouan with prices starting from £4,775 per person – a saving of £2,950 per couple.

This offer with Elegant Resorts is valid until 18 December 2019 and based on a 5 October 2019 departure.

Justin Bieber Goes Shirtless & Flaunts His Tattoos at the Gym