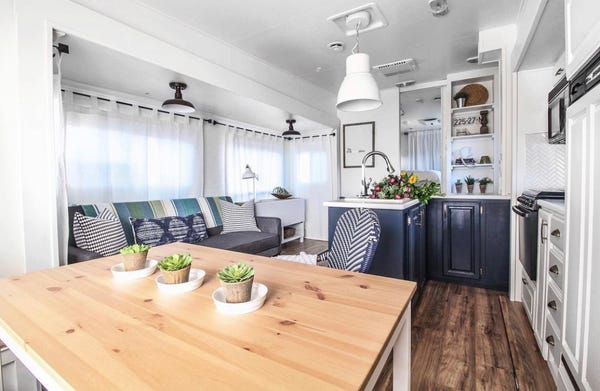 RVs are hotter than ever right now, with companies seeing huge spikes in sales and rentals.

While some of us are only just discovering the joys of traveling with our own bathroom and kitchen, Trina Sholin has been doing it for years.

Her only problem: RVs are ugly.

"The dark dated, drab interior — after many months, it was more than I could handle," she told Insider.

So the interior designer decided to make a few tweaks to her RV to make it homier and more aesthetically pleasing.

"I couldn't believe the difference it made and how much more it felt like a home after I completed the renovation," she says on the website for RV Fixer Upper, the company Trina runs with her husband Steve, who has a background in construction.

Trina, who has flipped around 15 houses alongside Steve, decided to do the same with houses on wheels, and started buying them, renovating them, and selling them for a profit.

While this was a side hustle for almost eight years, around a year ago, she and her husband turned their hobby into a full-time job by creating RV Fixer Upper.

Trina Sholin and her husband Steve are originally from Alaska, where he works in road construction and has always needed to be mobile. 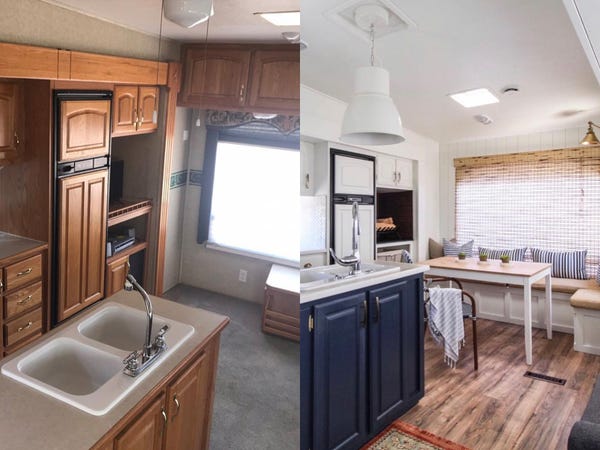 Because of the seasonal nature of Steve's work, the pair were spending a lot of time living in an RV, splitting their time between Alaska and Arizona.

Trina says that no matter the brand RVs seem to have "awful" design and decor. The interior designer saw that as a challenge.

Their first full renovation was on a Keystone Montana fifth-wheel trailer around eight years ago, which she said they completely gutted. 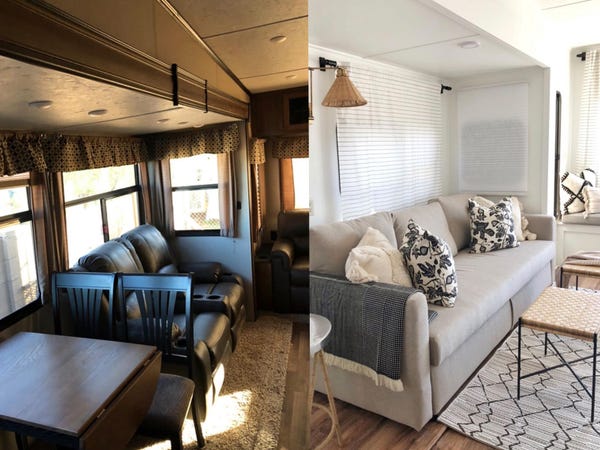 Back then, however, they didn't find much inspiration online.

"There still wasn't much online. Instagram had virtually nothing to look at or to follow," Trina said. "We just kind of figured it out along the way and had tons of people telling us that you can't do this and you can't do that — you can't put a chandelier in an RV, you can't put in tile."

However, when she did put in a chandelier and used tile, her renovation went viral after posting it on Pinterest. Trina said that she still gets inquiries about that first renovation, though she and Steve sold the RV years ago.

Although they started out renovating RVs for themselves, Trina said it soon became a side hobby, and then a business in 2019. 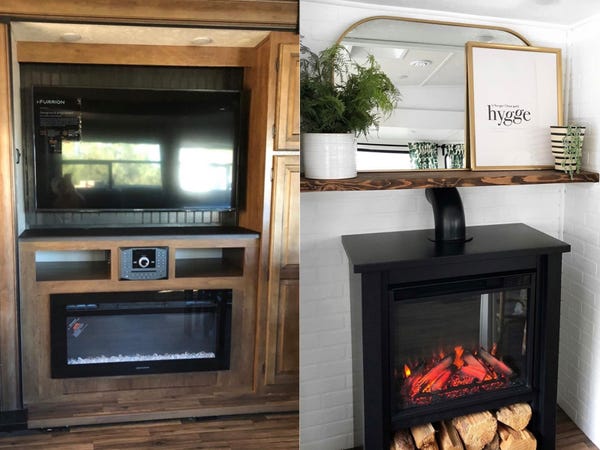 In terms of starting an RV renovation business, the Sholins are a dream team.

Not only have the two been living in an RV for over a decade; they also have complementary skill sets: Trina is a self-taught interior designer and Steve has a background in construction.

Together, they've renovated and flipped around 15 homes over the years.

To date, Trina estimates that she and Steve have renovated and sold 20 RVs. 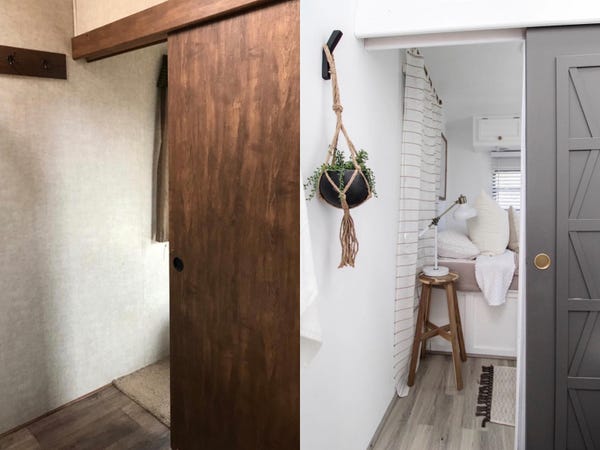 While Trina offers consulting services, she does not usually work with clients. She buys used RVs, renovates them as she sees fit, and then sells them. In fact, she refuses to even have a waiting list, preferring to give all clients an equal chance in purchasing a finished vehicle.

On average, the Sholins spend about six weeks on each renovation. 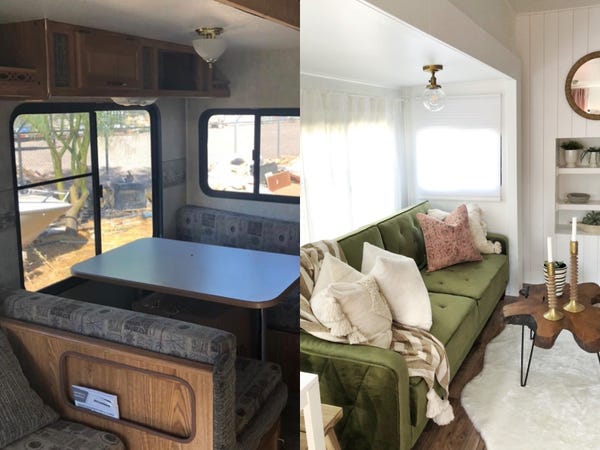 Once they've bought an RV — Keystone Montanas are still their favorite — they see what they want to tear out, as well as what they can't tear out or change because of pipes and plumbing.

Trina then comes up with a design plan, and the two get to work.

Trina says they prefer older RVs, because, in her experience, they're built better. 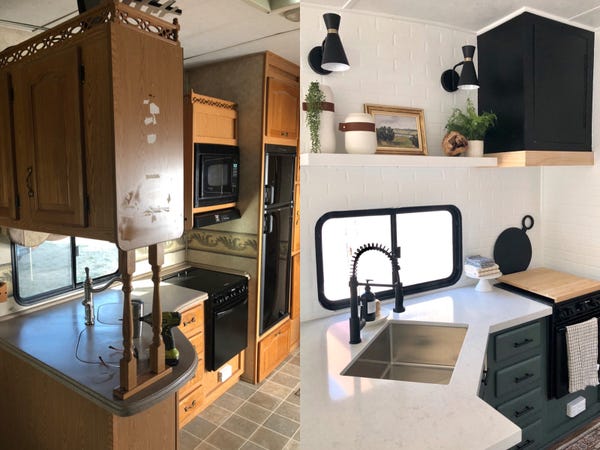 "We like the older ones more than the newer ones, just because they were made much more solid back then," she said. "We renovated a brand-new one a few months ago and it was nice, but the difference in the quality is pretty huge."

While she likes the "bells and whistles" the new ones have, such as backup cameras, older motor homes still have the edge.

She says that costs vary quite a bit, as they depend on the RV, its year, and mileage. 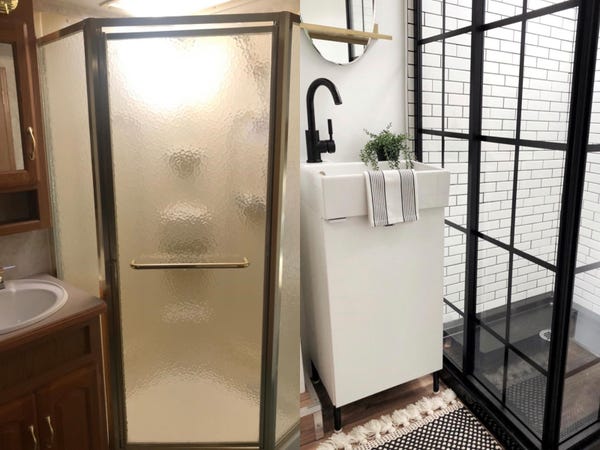 One of her favorite — and more expensive — things to put in her RVs are full, tiled showers. 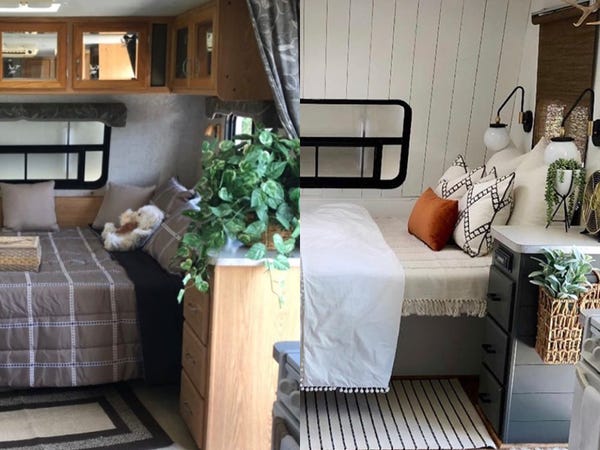 Trina said Ikea furniture "is so perfect for RVs, because it's all scaled for your small European home."

Trina's top tip when it comes to renovating RVs is to use vertical space. 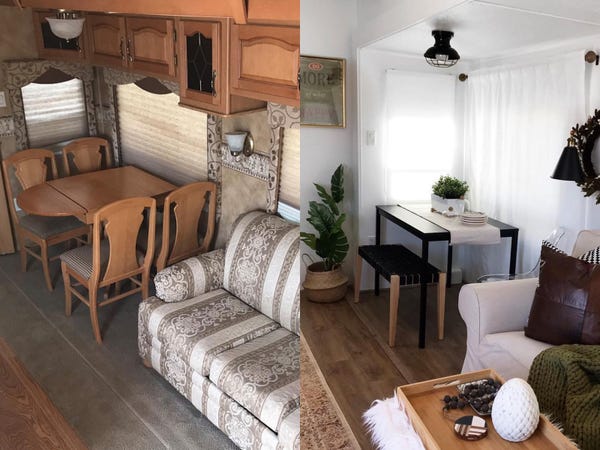 "People always forget about that. And in an RV, your vertical space is your saving grace," she said.

She likes to add shelves, closet organizers, and hooks since she says that RVs typically only come with closet rods and barely anywhere to hang a towel.

Trina, who has flipped over a dozen homes, says renovating an RV is similar to fixing up an old house. Fun, but filled with challenges. 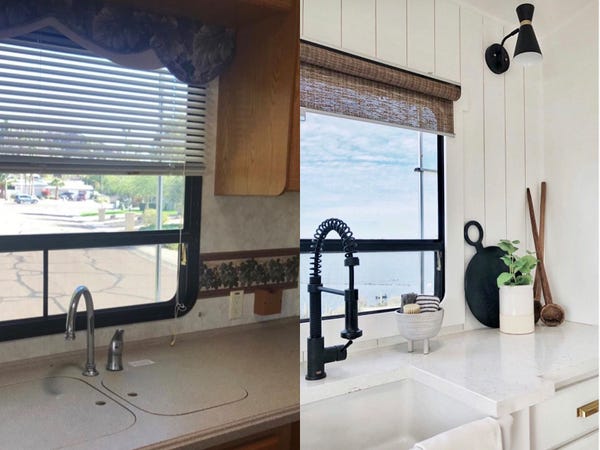 "I've bought and renovated around 15 houses, but the challenges of designing an RV are the most gratifying," Trina said.

She loves proving people wrong about what can and cannot be used to decorate an RV, or coming up with nifty ways to add residential touches that are maybe not made for transit, such as chandeliers, which she outfits with a discreet eyelet and parachute cord to secure while driving.

She says the coronavirus pandemic has changed the game a little recently — for good and bad. 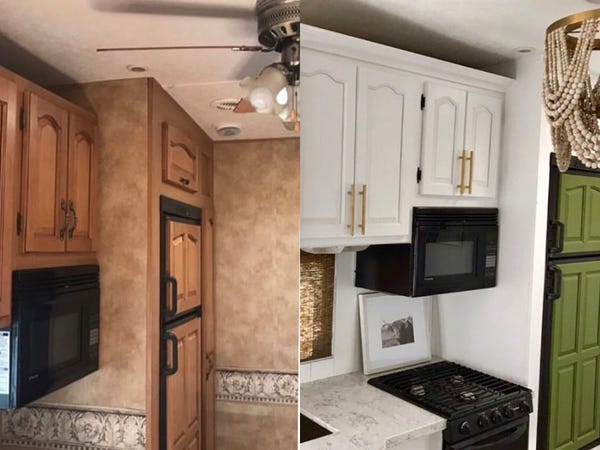 While there's been an increase in interest in RVs as people discover it as a safe and convenient way to travel during the pandemic, according to Trina, it's also made finding used RVs more difficult, and has driven prices up.

While she says that Phoenix, Arizona, where she lives, is usually one of the best spots to find used RVs on Craigslist since it's a place where people can camp year-round, she recently had to make a long drive to Texas to pick one up.

"COVID has changed everything because RV life has exploded even more than it already was exploding," she said. "RVs gave families a sense of control, a sense of 'we can still get out and explore, we can still vacation as a family, we're just going to do it differently than we maybe initially thought.'"

However, even pre-pandemic, Trina said she had seen interest in the RV lifestyle growing. 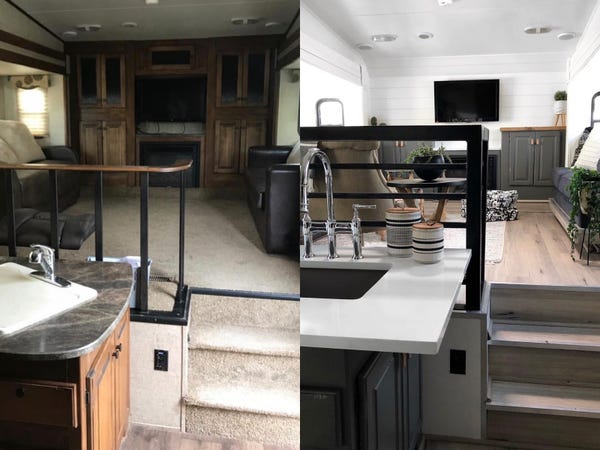 "I would say probably the last two years, has really, really exploded and taken off," she said of RV life. "Tons of people are renovating and tons of people are looking at RVs differently than they ever did."

According to Trina, the average RV's design has been a turnoff for many in the past, but knowing they can be turned into stylish vehicles has changed everything. 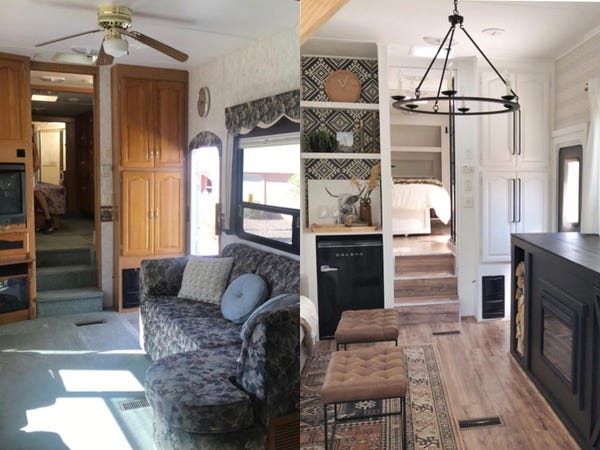 "I think that women especially were not open to [RV life] at all," she said. "And then once people started seeing what I was doing, what so many people on Instagram are doing, it made them realize: 'Maybe I do want to go camping, or maybe we do want to live in an RV for a while, while we build our house, or maybe we do want to take a year off and travel with our kids.'"

You can find out more about Trina and Steve's work on RV Fixer Upper.