My fantasy island really does exist! Falling for the Antiguan resort that boasts the perfect mix of champagne, celebrities and sunshine

A holiday in the Caribbean should be like something out of a fantasy: nothing but blue skies, hammocks slung between shady palms on golden sands and a cast of larger-than-life characters.

So our stay at Antigua’s Curtain Bluff resort could not have got off to a better start with some extremely strong rum punch served by a mate of the Rolling Stones’ Keith Richards, and an invitation to a cocktail party up at the big house that night.

The impromptu bartender and friend to the stars turned out to be the resort’s charismatic managing director, Rob Sherman. 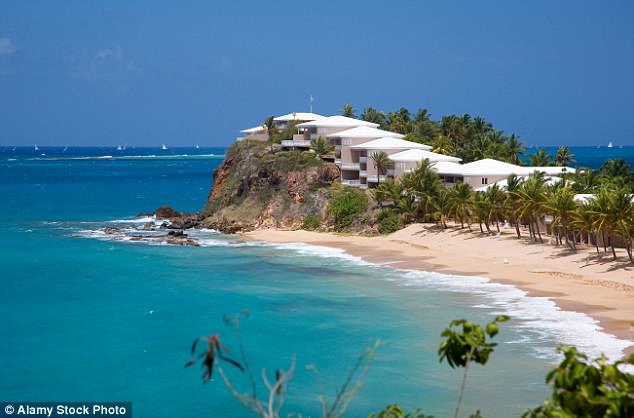 And the big house was Bluff House, home of Chelle Hulford who, along with pilot husband Sir Howard Hulford, built the all-inclusive, 72-suite Curtain Bluff in 1962, which has just reopened after a £10million refurbishment.

The cocktail party is a glitzy but friendly weekly social that Chelle (Sir Howard died in 2009) throws for guests, and we arrive ready for champagne and mingling.

I was surprised to discover that many guests have been coming to Curtain Bluff for decades. In fact, American doctors Terri and Rick Stodden were celebrating their 30th visit to the resort.

‘We’ve made so many good friends here over the years – guests and staff – we arrive knowing we’re going to have a good time. And it’s just so beautiful,’ Rick said. 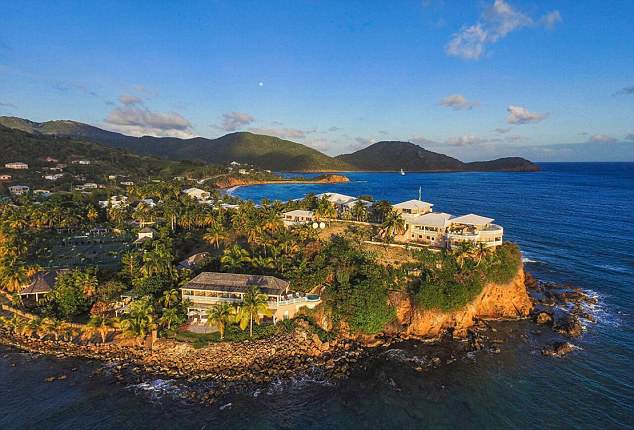 Paradise: Curtain Bluff sits on a quiet rocky outcrop that is flanked on either side by two glorious beaches: one on the calm Caribbean Sea, the other the Atlantic

Waking the next morning to sun sparkling on crystal-clear waters, we could see the regular guests had a point. Set in 20 acres of tropical, beachfront gardens, Curtain Bluff sits on a quiet rocky outcrop that is flanked on either side by two glorious beaches: one on the calm Caribbean Sea, the other the Atlantic.

The setting is extraordinary, with stunning views of Guadeloupe and the volcanic island of Montserrat in the distance.

Antigua – which was virtually untouched by last year’s hurricanes – is a lush and lovely island, its rolling mango and banana tree-clad interior fringed by 365 beaches (one for every day of the year, should you be so lucky).

Rob takes us on a tour of the island. Antigua is tiny, just 110 square miles, but dotted with historic landmarks from its past as a wealthy port trading slave-laboured sugar.

We drive up to Shirley Heights Lookout, an 18th Century military station (don’t miss the exuberant Sunday night barbecue there) with stunning views down on to picturesque English Harbour – all part of the recently Unesco-listed Nelson’s Dockyard National Park. 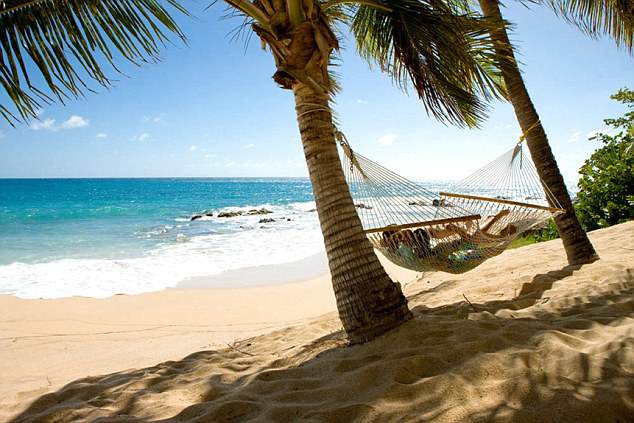 Designer Giorgio Armani and former James Bond actor Timothy Dalton are among the celebrities with houses on the island, and we lap up Rob’s stories about hanging out with his mates Eric Clapton, Elton John and the Rolling Stones.

That’s very much the vibe of Curtain Bluff: unstuffy luxury and a place where stars such as Harry Potter’s Daniel Radcliffe can relax (mostly) unnoticed.

With a huge number of sports included in the price, we throw ourselves into tennis lessons (there are four courts) sunrise Pilates on the beach, sailing, snorkelling and stand-up paddleboarding.

I even tried waterskiing. Although dreading an embarrassing You’ve Been Framed-style wipeout, patient instructor James managed to get me skimming (briefly) across the azure waves. It was fantastic – and exhausting – and we flopped into palm-slung hammocks with a couple of strong rum punches. A perfect Caribbean fantasy come true.

Other tour operators to Antigua include Sandals (sandals.com/destinations/antigua).