It was filmed by Virgin Atlantic, which decided to conduct a social experiment at London Heathrow to see what being bumped from economy to business class means to people.

It produced a slow motion video showing the moment it dawned on fliers that their journey is going to be considerably more luxurious than they previously anticipated. 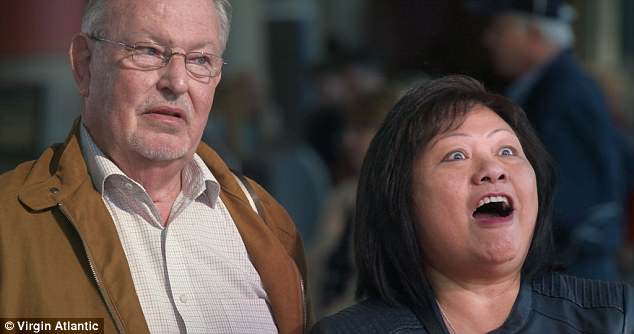 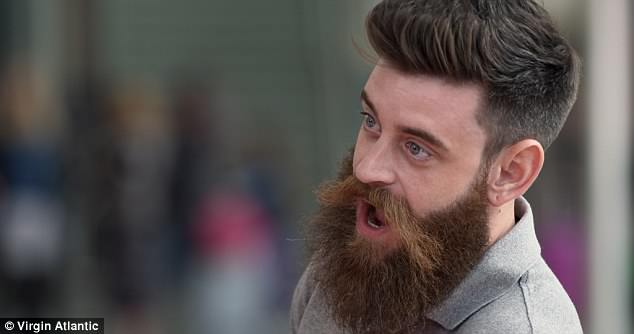 Virgin Atlantic decided to conduct a social experiment at London Heathrow, to see what being bumped from economy to business class means to people 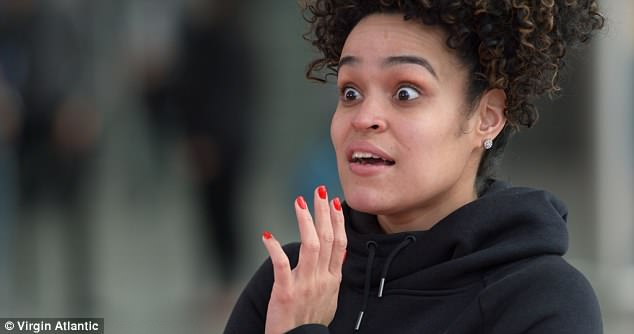 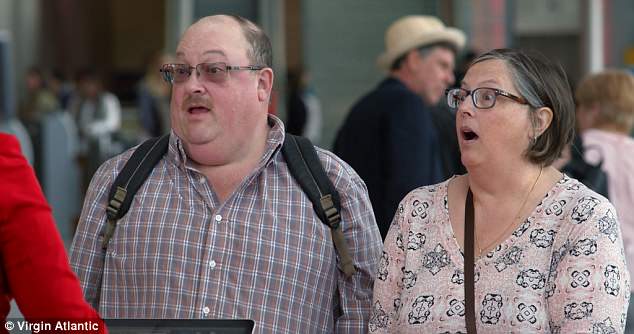 The clip shows one woman putting her head in her hands in disbelief, while one couple have a big hug in celebration.

Another man starts pumping his arms in the air while waving his passport around and one woman starts tearing up as she’s given the news.

He added: ‘By using hyper slow-motion cameras, we were able to secretly record the precise moment passengers realise they’ve been upgraded. We call it “Upgrade Face”.’

In conjunction with the social experiment, Virgin Atlantic investigated what the most popular methods for trying to blag an upgrade are.

Research revealed top tricks include dressing smartly (38 per cent), arriving extra early at the airport (36 per cent) and flirting with check-in staff (35 per cent).

But many more are willing to go the extra mile, with one in five pretending to have just got married, one in 20 claiming to be a journalist and a minority even attempting to bribe check-in attendants.

Julie Challenger, who has worked for Virgin Atlantic at London Heathrow for 15 years, said she’s seen lots of antics used by passengers in a bid to get a better seat. 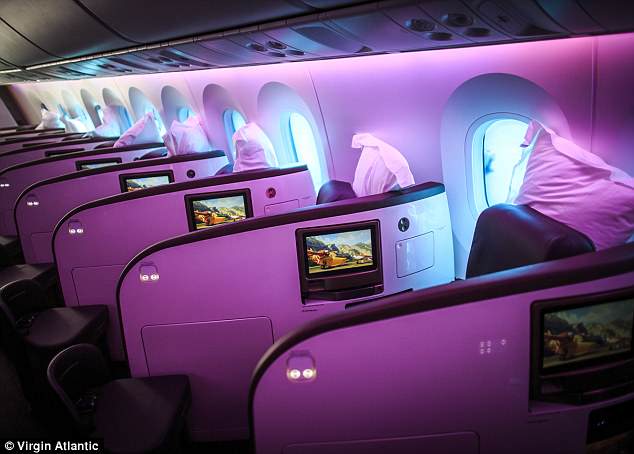 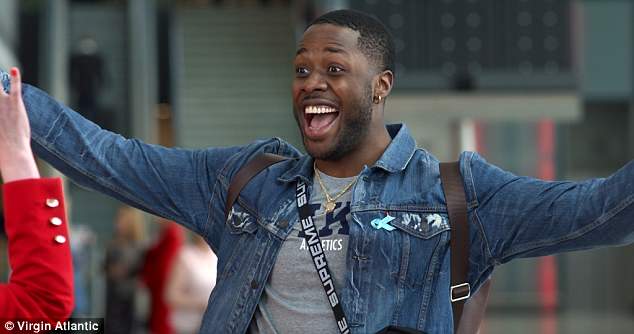 This man made his feelings very clear, throwing his arms in the air and cracking a big smile 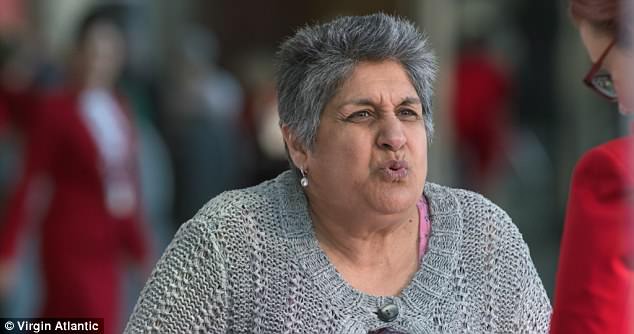 Virgin Atlantic conducted the social experiment to celebrate the launch of its new Reward Credit Card. This is passenger Nasrin Hassam reacting to the fact that she’ll be in the lap of luxury for her journey

Julie Challenger, who has worked for Virgin Atlantic at London Heathrow for 15 years, recounts some of more unusual tales passengers have told ground staff to secure an upgrade:

She said one man requested an upgrade so he wouldn’t have to sit next to his wife after they got into an argument.

While a ‘very famous magician’ offered to perform magic tricks for the crew in return for an upgrade.

Challenger said another young man hoped an upgrade would mend his broken heart after being dumped on his birthday.

Virgin Atlantic conducted the social experiment to celebrate the launch of its new Reward Credit Card, which allows customers to upgrade their seats using miles earned.

As the plane drops violently in the turbulence I grab the side of my pod and my heart leaps.

I’m flying ‘upper class’ with Virgin Atlantic from Johannesburg to London on a Dreamliner. But turning left doesn’t mean that turbulence is turned off. It just means the quality of the drinks being spilled is much higher.

The jolt is so severe that the captain is motivated to apologise to those on board shortly afterwards. ‘Sorry about that ladies and gentlemen,’ he says smoothly. ‘We just caught the edge of a storm back there. I do apologise.’ 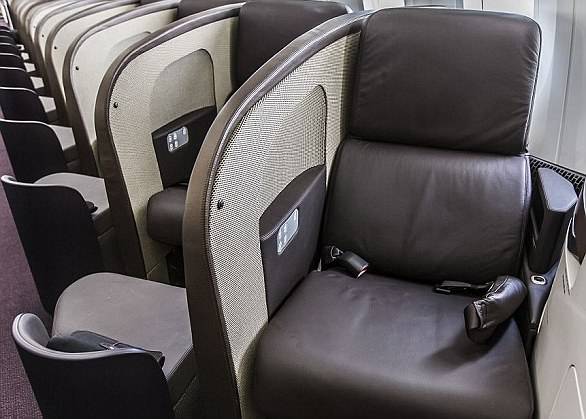 There are 31 ‘espresso leather’ seats in the Virgin Atlantic upper class cabin, arranged in a 1-1-1 formation

My ‘espresso leather’ seat is one of 31 arranged in a 1-1-1 formation and is supremely comfortably with lots of support. Plus, it has a little footrest that doubles as a seat for a friend, which even has its own seatbelt.

I feel nicely cocooned with leather-trimmed arched dividers on either side preventing those next to me from spying which guilty-pleasure movie I’m watching (OK, fine, it’s Transformers!).

The screen is 11 inches across, which isn’t industry leading, but a definite step-up from an economy screen. It’s manoeuvrable, too – it can be tilted up and down and pushed back and forth with ease.

The seat is highly manoeuvrable as well, with buttons to my right that alter the recline angle.

Back I go while I lap up the Virgin Atlantic service.

The airline has a good reputation in this area and the crew on the trip out to Johannesburg and on this return leg don’t disappoint – they’re friendly, chatty, upbeat and efficient (it takes a matter of seconds to be offered champagne upon boarding).

And the fodder and food they bring to my seat is pretty gourmet.

On the way out I tuck into a tender fillet steak in a caramelised garlic sauce with dauphinoise potatoes with a refreshing tomato and mozzarella carpaccio for starters. Tonight I opt for a mushroom risotto and a panna cotta for dessert.

Notable nod-of-approval touches include two very cool salt and pepper pots shaped like little propeller planes with the message ‘pinched from Virgin Atlantic’ on the bottom and a proper linen table cloth.

Dinner over, it’s time for a drink at the bar, surely the piece de resistance of the cabin.

It’s while having a chinwag around this with my travelling companions and a few cheeky snifters that the upper class experience really takes off.

But it isn’t perfection.

I like the feeling of being cocooned in Virgin’s pods – but I’ve experienced business class seats with more storage space – on Finnair’s A330, for instance. 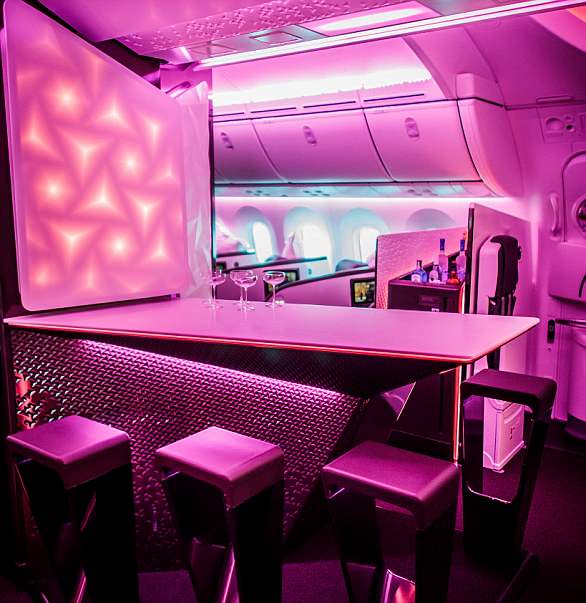 And while the seat folds down at the touch of a button into a very comfy flatbed, it has to be done in two stages. To go from reclining club-style seat to bed you need to stand up, fold the seat over, then hold down a button to flatten it.

A seat that flattens in one movement would be ideal.

And peculiarly, on the return journey, my duvet emerges from its bag feeling cold and damp. Clean, but wet.

A stewardess informs me that one other person has flagged a similar issue.

My guess is that it hasn’t been dried properly by the laundry team.

It doesn’t put too much of a dampener on things, though. I’ve got a (dry) pillow and mattress and once the Virgin Atlantic pyjamas are on (yes, they hand them out mid-flight) I get a solid four or five hours sleep under some blankets fetched by the stewardess.

And I wake up to a tasty full English with a croissant and coffee.

The upper class experience isn’t over yet though.

I head to the stylish ‘revivals lounge’ at Heathrow for a pick-me-up coffee and a banana.

The lounge offers a lot more though – showers, full breakfasts and even a shirt pressing service, so that anyone going straight to work can arrive looking pin sharp.

It’s impressive, but not as impressive as the Virgin Clubhouse we hang out in before our outward flight from Heathrow. This is so good it poses a threat to boarding the aircraft on time.

It boasts a 14-metre cocktail bar, power showers and a spa that offers everything from haircuts to manicures.

No wonder it’s a legend among lounges.

And I arrive there having been chauffeured in a flash Merc to a private check-in area by Virgin’s limo service. There I’m in a queue of zero and a member of staff even takes my bag from the boot of the car to the luggage conveyor belt for me, before I negotiate the private security area.

Here one other solitary traveller has the effrontery to delay me by a handful of seconds.