Home » Travel » Disneyland as a Vaccination Site? Airports as Test Centers? The Travel Industry Pitches In 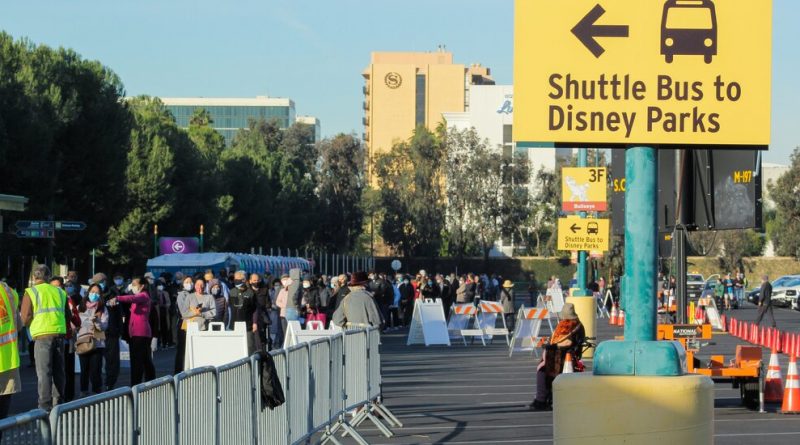 Five months ago, San Francisco International Airport opened the first airport rapid coronavirus testing site in the United States. Nine months ago, some of the world’s most luxurious hotels, including Claridges in London and the Four Seasons in New York, began housing frontline doctors and nurses. And now another entity in the travel world is performing its own pandemic shift: Disneyland. This week the Anaheim, Calif., theme park began serving as a vaccination super site.

The coronavirus, which has killed more than 384,000 Americans and infected millions more, has brought the travel industry to its knees. The U.S. Travel Association, a trade group that promotes travel to and within the country, estimates that nearly 40 percent of all travel jobs have been eliminated since the virus took hold in March. But with hotels at record-low occupancy, some airports running on skeleton crews and fairgrounds emptied of guests, many domestic travel companies and operators have begun donating their resources and newly vacant spaces to help get the pandemic under control.

Disneyland has been shuttered since mid-March, but on Wednesday, a section of its Toy Story parking lot was full. Emergency medical workers and local residents over the age of 75 queued for the first of five Orange County, Calif., “Super POD” (Point Of Dispensing) sites, and Andrew Do, chairman of Orange County’s board of supervisors, says they will soon be able to inoculate 7,000 people a day there.

“There’s no better place to have our first Super POD than right here at Disneyland, a travel destination for people around the world,” Mr. Do said at a news conference.

The site, which is currently only accepting residents in phase “1a” — which includes frontline health care workers, paramedics and pharmacists — is being run by the county, but in addition to providing space, Walt Disney Co. is providing some staffing assistance. (There have been lines, and officials at the site warned of future shortages, however; California this week loosened some restrictions on vaccine eligibility in a bid to speed up the state’s sluggish vaccine rollout.)

“Disneyland Resort is proud to help support Orange County and the City of Anaheim with the use of our parking lot,” said Dr. Pamela Hymel, Disney Parks’ chief medical officer. “After a year in which so many in our community have faced unprecedented hardship and uncertainty, there is now reason for optimism.”

Unlike its sister resort in California, Florida’s Disney World reopened to guests in July. And they, too, are considering opening an on-site vaccine distribution center in the near future, according to a report in the Orlando Sentinel. 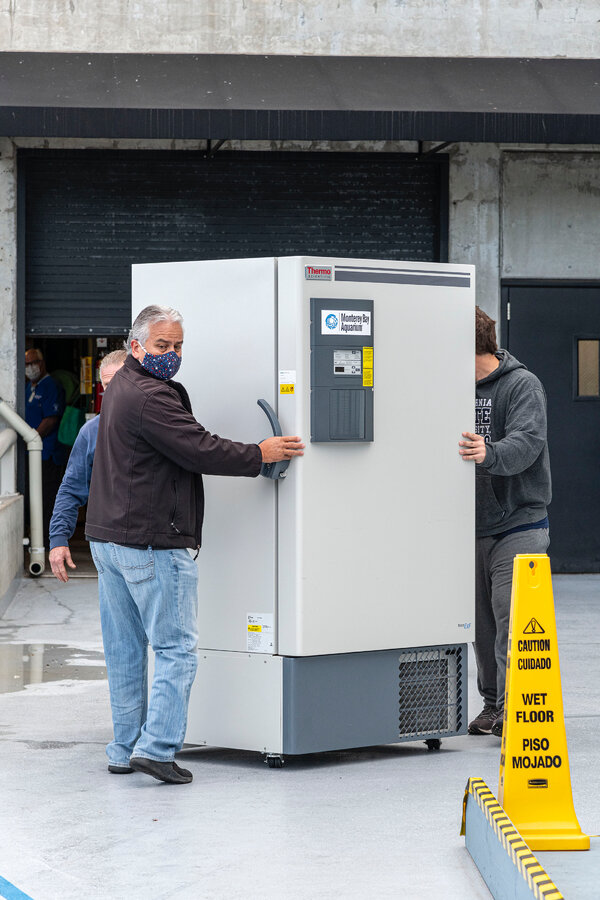 Other parts of the travel industry are helping, too

Many corners of the travel industry are looking for a way to pitch in to help end the pandemic.

Answers to Your Vaccine Questions

While the exact order of vaccine recipients may vary by state, most will likely put medical workers and residents of long-term care facilities first. If you want to understand how this decision is getting made, this article will help.

Life will return to normal only when society as a whole gains enough protection against the coronavirus. Once countries authorize a vaccine, they’ll only be able to vaccinate a few percent of their citizens at most in the first couple months. The unvaccinated majority will still remain vulnerable to getting infected. A growing number of coronavirus vaccines are showing robust protection against becoming sick. But it’s also possible for people to spread the virus without even knowing they’re infected because they experience only mild symptoms or none at all. Scientists don’t yet know if the vaccines also block the transmission of the coronavirus. So for the time being, even vaccinated people will need to wear masks, avoid indoor crowds, and so on. Once enough people get vaccinated, it will become very difficult for the coronavirus to find vulnerable people to infect. Depending on how quickly we as a society achieve that goal, life might start approaching something like normal by the fall 2021.

Yes, but not forever. The two vaccines that will potentially get authorized this month clearly protect people from getting sick with Covid-19. But the clinical trials that delivered these results were not designed to determine whether vaccinated people could still spread the coronavirus without developing symptoms. That remains a possibility. We know that people who are naturally infected by the coronavirus can spread it while they’re not experiencing any cough or other symptoms. Researchers will be intensely studying this question as the vaccines roll out. In the meantime, even vaccinated people will need to think of themselves as possible spreaders.

The Pfizer and BioNTech vaccine is delivered as a shot in the arm, like other typical vaccines. The injection won’t be any different from ones you’ve gotten before. Tens of thousands of people have already received the vaccines, and none of them have reported any serious health problems. But some of them have felt short-lived discomfort, including aches and flu-like symptoms that typically last a day. It’s possible that people may need to plan to take a day off work or school after the second shot. While these experiences aren’t pleasant, they are a good sign: they are the result of your own immune system encountering the vaccine and mounting a potent response that will provide long-lasting immunity.

No. The vaccines from Moderna and Pfizer use a genetic molecule to prime the immune system. That molecule, known as mRNA, is eventually destroyed by the body. The mRNA is packaged in an oily bubble that can fuse to a cell, allowing the molecule to slip in. The cell uses the mRNA to make proteins from the coronavirus, which can stimulate the immune system. At any moment, each of our cells may contain hundreds of thousands of mRNA molecules, which they produce in order to make proteins of their own. Once those proteins are made, our cells then shred the mRNA with special enzymes. The mRNA molecules our cells make can only survive a matter of minutes. The mRNA in vaccines is engineered to withstand the cell’s enzymes a bit longer, so that the cells can make extra virus proteins and prompt a stronger immune response. But the mRNA can only last for a few days at most before they are destroyed.

Monterey Bay Aquarium in Monterey, Calif., has been closed to guests since March; in December, they lent one of their ultracold freezers to a hospital in nearby Salinas; the special freezer can maintain temperatures of minus 94 degrees Fahrenheit, which are required to safely store some coronavirus vaccines.

In the early weeks of the pandemic, the State Fair of West Virginia signed an agreement with the Greenbrier County Health Department, pledging the use of their facilities for testing, vaccination and even a surge hospital, if needed. Closed in 2020, their grounds have since been the site for three free drive-through testing clinics, and are now currently operating as a vaccination center for local residents.

Many of the Orange County residents who get their vaccine jabs at Disneyland will have gone for coronavirus testing at the Anaheim Convention Center, which, like convention centers across the country, saw traffic screech to a halt in March. Jay Burress, president and chief executive of Visit Anaheim, estimates the freeze cost the city $1.9 billion in lost revenue. He responded by donating unused supplies to local nonprofits. In July, the convention center parking lot was converted into a mass testing site.

“How do we reopen safely? That’s been our goal all along,” said Mr. Burress. “To market our destination, either as a leisure destination or a convention destination when hotels aren’t even open for leisure travel, is spinning your wheels.”

Sharon Decker is president of North Carolina’s Tryon Resort, which includes 250 rooms and an equestrian center, as well as a 300,000-square-foot indoor arena, on 1,600 acres in the foothills of the Blue Ridge Mountains. She wasn’t surprised in October when Polk County, N.C., officials reached out to see if she would be willing to donate that arena as a vaccination site, although she knew it would present logistical challenges. The site opened in mid-December.

“We forged a real partnership with public health officials,” she said. “It had to be true public-private partnership to pull this off. But when you have shared goals, for a healthy economy and healthy businesses, you can figure it out.”

‘The business sector needs to have a seat at the table’

Those public-private partnerships will be key to getting the United States out of the pandemic, said Steven Pedigo, a professor at the University of Texas at Austin and an expert in urban economic development.

“There are only a few entities that understand mass logistics. One is the military and the other is the private sector,” he said. “The business sector needs to have a seat at the table to talk about how we respond comprehensively, to ensure we are building a strategy around the pandemic that isn’t just prioritizing public health, but is also keeping the economy up and running.”

Mr. Pedigo said that when it comes to a large-scale mobilization effort like nationwide vaccination, the travel industry is well qualified.

“This is what they do — they move people, and they move large amounts of goods and services,” he said. “They’re in the business of crowd control. So it makes sense to do this at a Disney World or an Alamodome. They have the expertise for it.”