Home » Travel » Don’t make the same mistake I did by visiting Disney World during the pandemic. It’s just not worth it. 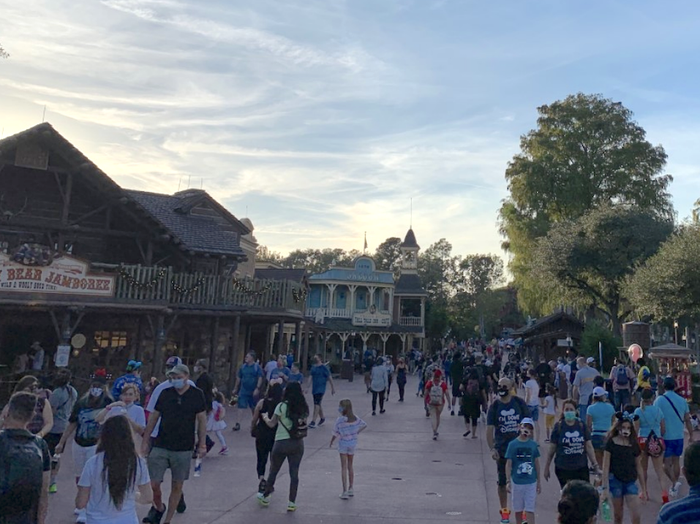 In recent weeks, there has been a dramatic rise in new COVID-19 cases nationwide, and Florida is among the worst-affected states in the country. And yet, it seems many people aren't afraid to visit Disney World for the holidays.

In a press conference during the week of Thanksgiving, Florida's Orange County Mayor Jerry Demings said Orlando International Airport was among the busiest airports in the country. At the same event, Orlando Mayor Buddy Dyer acknowledged that many people flying in around the holiday were going to Disney World.

I was one of them, making the decision to take my family to Disney World the week after Thanksgiving, assuaged by articles calling the Magic Kingdom crowd-free and "desolate," along with the Walt Disney Company's thorough health and safety commitment.

My family and I took precautions to travel from Utah to Florida, but once we got to Disney World it didn't feel so safe

To mitigate safety risks on our travels, we drove ourselves to Salt Lake City's international airport and booked seats in the back of the plane as we learned that a number of airlines — including Delta, the airline we flew with — were loading from back to front to decrease contact between passengers and we didn't want to pass others as we boarded or be surrounded by people in the rows behind us as well. (Thankfully, our young children — even our 2-year-old — are so accustomed to wearing face masks that we didn't have any issues complying with Delta's face-mask policies once onboard.)

We also called ahead to make sure our transportation from the airport to our Disney hotel had safety measures in place. We confirmed that Disney's bus would go directly to the resort without making additional stops and had masks requirements in place, as well as empty rows or plexiglass dividers to keep parties distanced.

Despite all of the precautions we took to travel safely, I was stunned by what we experienced at the "happiest place on earth."

My wife and I frequently saw throngs of massive crowds — sometimes shoulder-to-shoulder — as they gathered in front of Cinderella's castle or made their way through the Magic Kingdom's meandering pathways connecting each "land" to another. I experienced a crowd of people so thick at one point in Adventureland, that a woman near me shrieked out to the people in her party: "Get me out of here! This is crazier than a frat party!"

Although a representative for Disney World told Insider the company does not publicly share attendance numbers, Disney CEO Bob Chapek confirmed in a November 12 earnings call with investors that the park increased capacity from 25% to 35% — which represents up to a 40% increase in the number of guests — in October.

Chapek also told investors that holiday reservations were 77% booked two weeks before Thanksgiving, and that the week of Thanksgiving was, at that time, "booked close to capacity." I don't know what attendance was like the week after Thanksgiving when my family arrived, but it seemed very crowded to me. And many of the Disney World annual passholders and cast members (Disney employees) I spoke with during my visit said they thought the parks were much busier than they were a few months ago.

"When we first opened in July," one cast member said, "we were a ghost town."

One local annual passholder told me the park was "unrecognizable" today compared to how it appeared to her a few months ago.

And there's no reason to believe the number of Disney-bound travelers won't continue to rise now that the Food and Drug Administration has granted emergency use authorizations to two coronavirus vaccines, with data from Skyscanner showing a spike in flight-booking searches on November 9, the day news of Pfizer's vaccine broke — suggesting that more people are starting to plan trips again.

In the meantime, Disney has continued offering steep discounts to incentivize cost-conscious families like my own to travel to the area during the pandemic — a move that's paying off for the company. The uptick in visitors has improved Disney's revenue in the last few months, with the company's fiscal earnings reports from last quarter to the previous quarter showing that Disney World's profits have increased dramatically.

While more visitors has helped Disney's business, the health risks of visiting the park during the pandemic remain high.

The Centers for Disease Control and Prevention (CDC) warns that "large in-person gatherings where it is difficult for individuals to remain spaced at least 6 feet apart and attendees travel from outside the local area," are among the "highest risk" level of activity that a person can engage in during the pandemic, and there are many health risks to consider about a trip to Walt Disney World.

In fact, before allowing guests to secure a park pass reservation, the company requires guests to acknowledge its COVID-19 warning that says "an inherent risk of exposure to COVID-19 exists in any public place where people are present," and says they "voluntarily assume all risks related to exposure to COVID-19" by visiting Disney World. It also reminds guests "COVID-19 is an extremely contagious disease that can lead to severe illness and death," and says that by entering the park visitors confirm that they aren't experiencing any of the COVID-19 symptoms outlined by the CDC.

The former magic of Disney World was missing

Though Disney World has made several operational adjustments since it reopened (click here for the most up-to-date park information), at the time of our visit we found many of our favorite park staples were understandably lacking or absent altogether in the interest of safety.

Character interactions have been suspended, and lavish parades have been replaced with impromptu drive-bys of a vehicle or two and a handful of spaced-apart characters waving. Many of the rides now have plexiglass dividers between rows that make it difficult to see the attraction, and you can't capture the smiles on your children's faces when they're behind a mask. Many of the park's most popular restaurants are closed, too.

And long lines are inevitable with empty rows left on attractions to keep riders apart, and Disney's FastPass system now suspended. A cast member told me the FastPass line was closed to the general public with some exceptions for those with disabilities, rider-switch parties (Disney's service that lets ride-goers hold their place in line as they wait with non-riders, often children, while others in their party enjoy the attraction), and Club 33 members who pay steep membership fees for perks (Club 33 membership is said to cost $12,000 annually on top of a one-time $25,000 entrance fee).

As such, we spent the majority of our vacation waiting in line and we weren't able to experience nearly as many attractions as we have in previous visits. In the past, at least in my experience, the posted wait-time estimates at Disney theme parks were much longer than the actual wait time, but now actual wait times often exceed posted wait times.

Our visit to Walt Disney World wasn't all bad, however

My family's stay at Disney's Art of Animation Resort was splendid. We experienced the same hospitality and friendly service throughout the days we were there and the crowds seemed significantly smaller around our hotel, where we could escape the packed theme parks. Twice, we even had the hotel pool almost to ourselves. Though I never saw a line form at the pool while we were there, a lifeguard told me the resort does limit the number of people in the area, and masks are required when walking or lounging around the pool — though not while swimming.

When we booked the room, we were told that "enhanced cleaning" was used to "thoroughly sanitize" our room, and the resort gave us the option to opt out of housekeeping altogether during our stay or have a "light cleaning" every other day. We were also told our hotel room would not be adjacent to other occupied hotel rooms and we appreciated that all of the purchases we made at the resort were contactless through the My Disney Experience app.

What's more, Disney's bus and Skyliner transportation systems ran like clockwork throughout our stay. Though one Disney driver told me they are only allowed to load buses to half-capacity during the pandemic, Disney World has increased the number of buses running — so much so that my family never waited longer than five minutes for a bus to take us anywhere. Each party boarding the bus is assigned a numbered seating section, and large dividers and empty seats are placed between them to ensure distance between travelers once onboard. And Disney transportation systems are sanitized frequently, according to the company's commitment to health and safety measures.

I was also relieved to be in a place that enforced mask-wearing more strictly than my home state of Utah, where a surprising number of anti-maskers have driven up the number of new COVID-19 cases. Loudspeaker announcements frequently reminded park-goers to properly wear a face covering, signs were posted everywhere warning that "guests not properly wearing an approved mask will be asked to leave," and cast members immediately asked guests to adjust their face mask if it ever fell below their nostrils. And while I never saw any measures in place to limit massive crowds of people from forming around the throughways of the parks, I rarely saw a ride queue where people weren't appropriately spaced at least six feet apart by adhering to markings on the ground.

One other upside we experienced was that quick-service restaurants throughout the parks and at our resort now require mobile ordering. As a result, there weren't any physical lines at food-pickup windows because everyone was entered into a virtual queue instead.

Ultimately, though, none of these upsides began to make visiting Walt Disney World during the pandemic worth the money and effort. Though we tried to make the most of an unexpected situation, I wish my family would have saved the small fortune we spent in going there when we did to instead visit the magical world of Disney at a time when it would have been both safer and more enjoyable.

A representative for Disney World declined Insider's request for comment on this article.