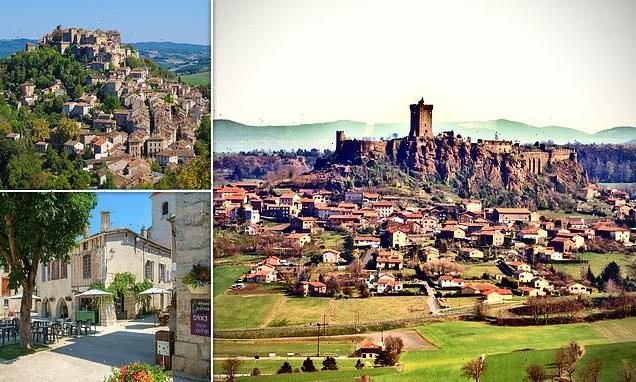 Pictured: The enchanting villages in France added to the official list of the country’s most picturesque hamlets

Postcard-perfect hamlets with cobbled streets, ancient fortresses and jolly fetes: it’s what every visitor to France hopes to stumble upon.

Thankfully, there’s no need to rely on a chance encounter, as The Most Beautiful Villages of France book pinpoints the very best of them. It’s compiled by an association dedicated to preserving rural towns called Les Plus Beaux Villages de France, and it contains directions, maps and architectural highlights to over 160 quaint settlements. 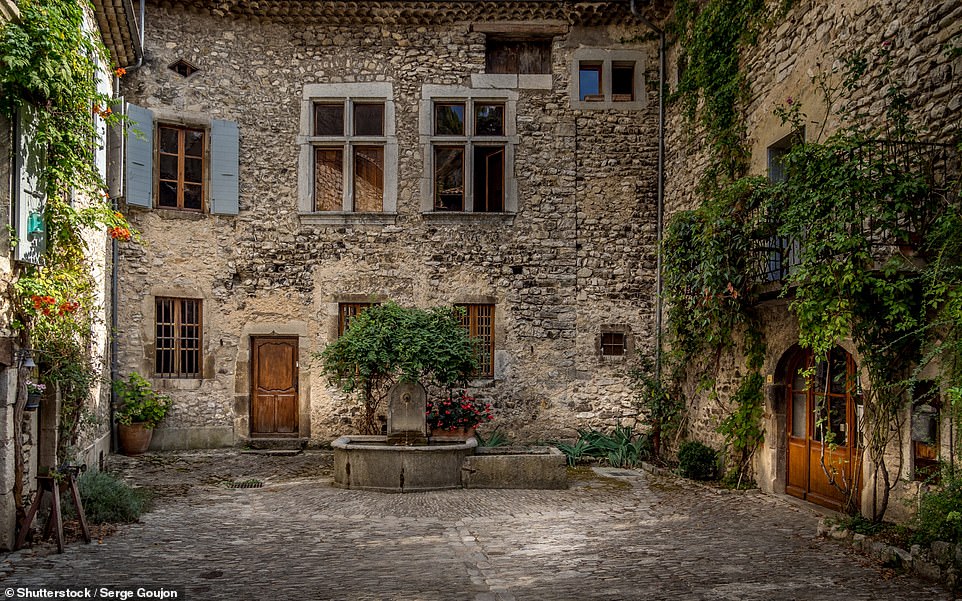 The definitive list of the most beautiful villages was compiled with a view to preserving precious rural towns in France. Pictured is Place de la Concorde, found in one of the book’s new additions, Chatillon-en-Diois

Les Plus Beaux Villages de France (‘most beautiful villages’) association was formed in 1982 and has since listed almost 160 villages, chosen for their heritage, architecture and general quaintness. And size matters – a ‘Plus Beaux Village’ cannot have a population larger than 2,000.

Centuries ago on the site of this ‘peaceful, quiet village’, which is nestled at the foot of the Glandasse mountain in southeastern France, stood a simple feudal castle built on a rock, the book explains, but ‘little now remains’.

‘Over the centuries,’ the tome continues, ‘a village gradually coalesced around its first landmark, the Eglise Saint-Nicolas, built around 1200 from local Breche marble and Glandasse limestone.’

Today, Chatillon-en-Diois is surrounded by one of the highest vineyards in France and, ‘benefitting from abundant sunshine is well suited to the cultivation of vines’.

The book adds: ‘The Pays Diois is renowned for its wines. In particular, the famous Clairette de Die, an AOC sparkling wine.

‘With more than 150 plant species spread throughout the village, Chatillon-en-Diois also appeals to plant lovers.’

Highlights in the village include the heritage tour, which starts at the Champ de Foire; the village fete, which takes place the second weekend of July; and the local art and wine festival, Festival Arts et de la Vigne, in August.

Accommodation options include two hotels and three guest houses, with five restaurants available for the elimination of hunger pangs. 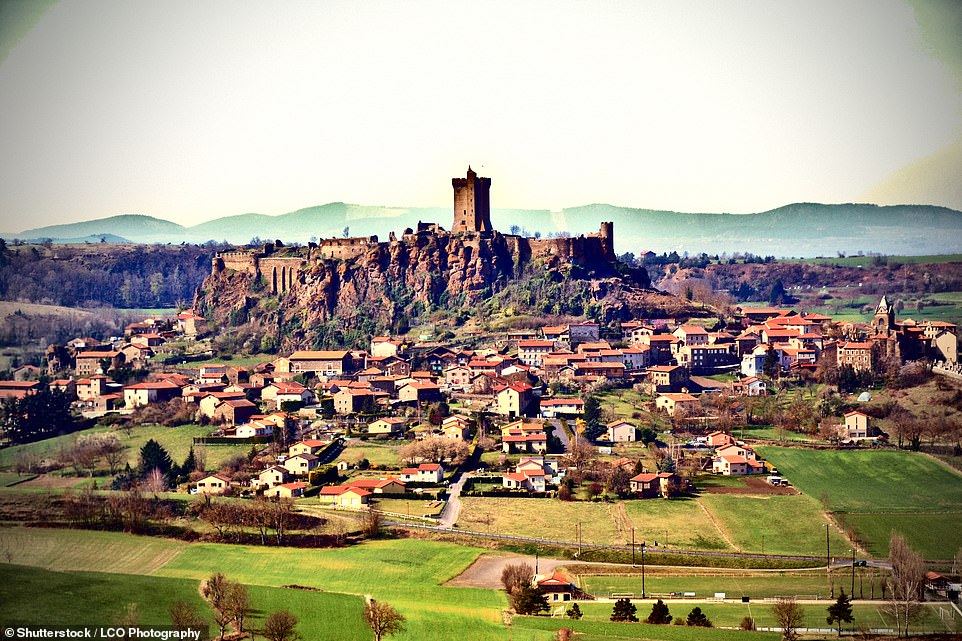 Polignac, in south-central France, is referred to as ‘fortress of the mountain kings’ and has a fascinating history, as well as great views.

The book explains: ‘Perched on a basalt outcrop near Puy-en-Velay, the powerful fortress of the lords of Polignac and the village below enjoy panoramic views over the Meygal and Mezenc mountains.

‘According to legend, this volcanic hill was home to a temple to Apollo during Gallo-Roman times, making it famous even then. Texts dating back to 934 make mention of a public fortress that served to defend the town of Puy-en-Velay. But it was thanks to the Polignac family that the village developed in the 11th century.

‘In order to establish their power in the region, the family created an imposing defensive system, building a keep and ramparts with arrow-slits and six fortified gates to reach the hilltop. The village was built at the foot of this fortress.’

According to the book’s authors, Polignac ‘attracts those interested in heritage and history as well as amateur geologists and nature lovers’.

The fortress offers guided tours and a treasure-hunt guidebook for five to 12-year-olds. 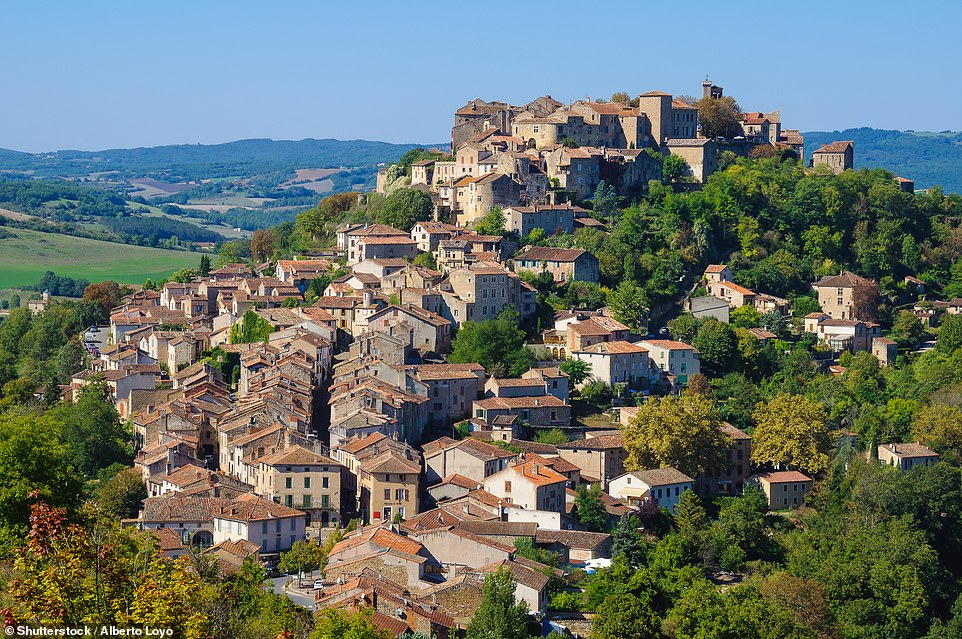 The book loves medieval Cordes-sur-Ciel, pictured, for its ‘cobblestone streets, its fortified gates and its panoramic view’

Perched on high and overlooking the Cerou river in southern France, the book summarises Cordes-sur-Ciel as a ‘charming medieval village’.

Created and officially inaugurated in 1222, by Raymond VII, count of Toulouse, the book notes that it was ‘initially made up of local limestone walls, and partially built by its inhabitants’.

It adds: ‘Today, its heritage, its narrow, cobblestone streets, its fortified gates, and its panoramic view over the Cerou valley provide the village’s many artists and craftspeople with a source of inspiration that runs as deep as the water in the market’s well.’

The book picks out the local market, which boasts a 16th-century cast-iron cross listed as a historical monument, as one of the highlights. 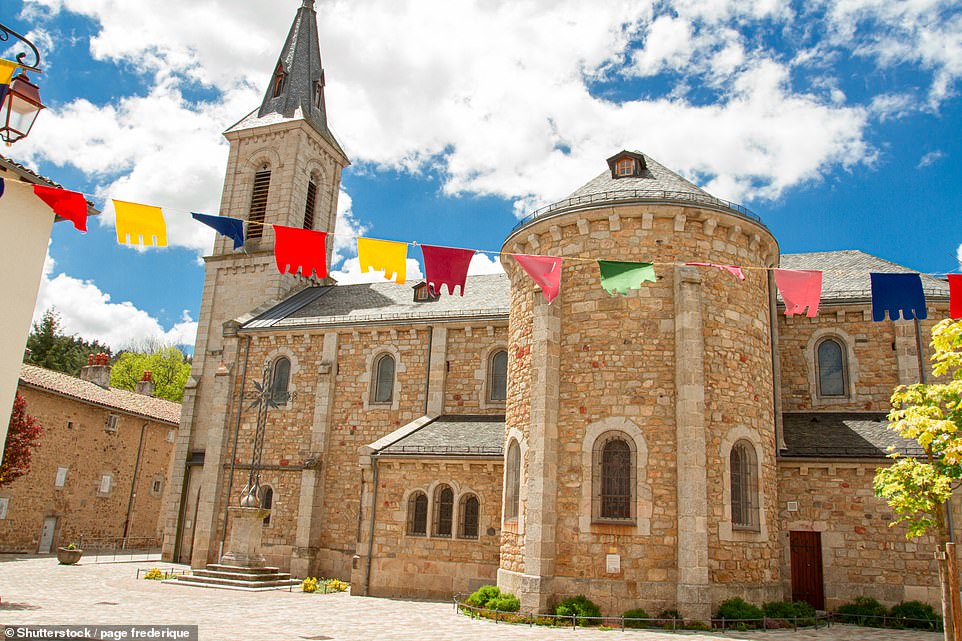 Found in the historical province of Gevaudan, Le Malzieu-Ville draws visitors with its historical relics, such as the 13th Century clock tower, Tour de l’Horloge, which was used as a feudal dungeon. Pictured here is the medieval church

Known as the ‘Pearl of the Valley’, Le Malzieu-Ville is a medieval town in the historical province of Gevaudan in southern France.

‘Le Malzieu-Ville built up its fortifications – ramparts, defensive towers, keeps, and monumental gates – to protect it during the Hundred Years’ War and project an impression of power,’ the book notes of the town’s rich history.

‘But a few centuries later the village faced the tumults of the Wars of Religion. The Huguenot captain Mathieu Merle seized the town in 1573; massacres, imprisonments, executions, and destruction followed.’

The book adds: ‘Today, Le Malzieu-Ville offers visitors all the charms of a lively historic village at the heart of a magical landscape.’

The 13th century clock tower, Tour de l’Horloge, is a highlight that the book notes was used as a feudal dungeon then a prison. It’s a must-see for its ‘panoramic view of the town and the surrounding area’. 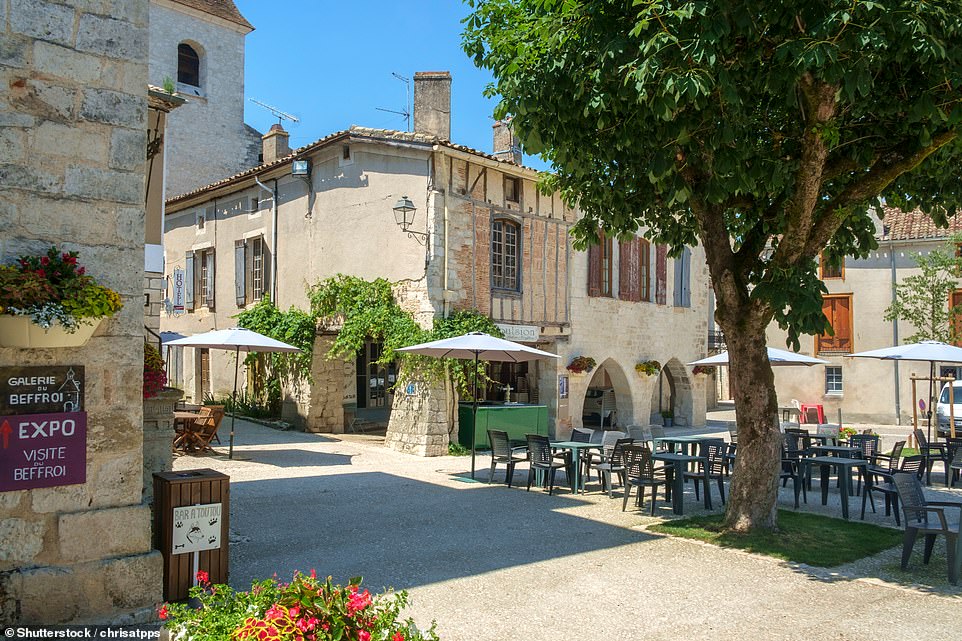 The quaint settlement of Tournon-d’Agenais (town square pictured) has an impressive calendar of events, including the May 1st flower festival and the Foire de Tourtieere, which celebrates a delicious dessert that the villagers have made for decades 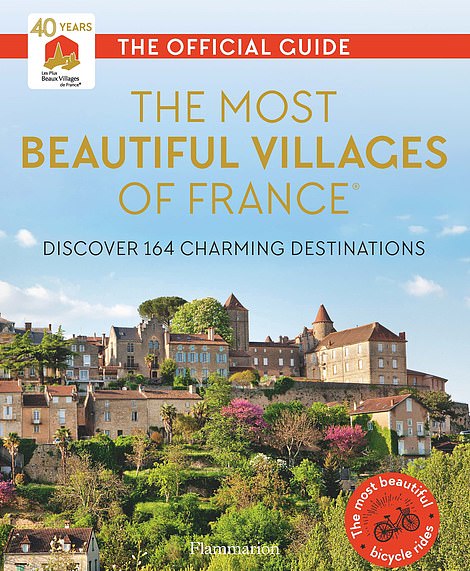 Originally a Celtic fortified town and later a royal bastide, the book says that Tournon-d’Agenais, in Lot-et-Garonne in southwest France, has ‘cultivated the good life’.

‘Built on a spur overlooking two valleys between the Lot and the Garonne, the village’s ramparts, tall, pale houses, and well-ordered streets are typical of the “new towns” that were built in the 12th century,’ the book notes.

It goes on to admire the Maison de l’Abescat, the residence of the bishop of Aven, which became a church in the 17th century and was recently converted into a concert venue.

The book concludes by saying: ‘Tournon d’Agenais continues to write its own history while perpetuating local traditions.’

Must-visit events include the May 1st flower festival and the Foire de Tourtière, ‘which celebrates a delicious dessert that the villagers have made for decades’.