Mauritius is famous for its exclusive beach resorts, but follow in the footsteps of Charles Darwin and head into the jungle and mountains and you’ll find the very height of luxury 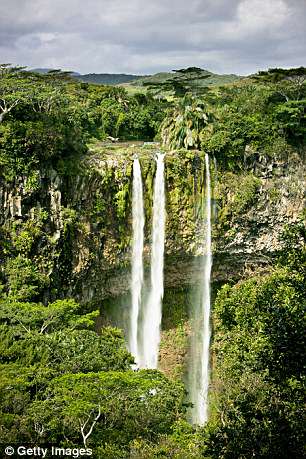 Sheer delights: The 272ft Chamarel Falls in Mauritius away from the busy beach resorts

The path wound through thick, damp rainforest. Monkeys howled among brightly coloured plants and unfamiliar exotic birds screeched from the treetops. I stumbled over tangles of tree roots while trying not to step on thousands of tiny black frogs, scurrying around in the undergrowth.

My brilliant hike through the wilderness of Mauritius seemed a million miles from the pristine comfort and stylish restaurants of the five-star resort where I was staying.

This tropical holiday island is famous for luxury beach hotels lining its coastline of white sand, coral reefs and turquoise lagoons. Along with the year-round warmth they have helped make Mauritius a favourite of honeymooning couples and once-in-a-lifetime holidaymakers.

I was lucky to be staying at Le Touessrok – a fabulous resort on the east coast – but was determined not to spend my stay slumped on a sunlounger. I’d travelled 6,000 miles to get there and wanted to find out more about this island in the Indian Ocean, 700 miles east of Madagascar.

I soon discovered that Mauritius is about the size of West Yorkshire and five times bigger than the Isle of Wight. It’s an independent country with a culture that’s a mix of Asian, African and Western.

Its claim to fame is that it was once the home of the dodo, a bird that was so easy to catch and delicious to eat that it became extinct in 1662.

A few days of torrential rain made it easier to abandon the beaches of Le Touessrok. With a borrowed umbrella I visited the island’s biggest market at the nearby town of Flacq.

It was fun browsing a vast array of colourful stalls selling chillies, plantains and tea. The atmosphere was boisterous but friendly.

Away from the resorts, visitors find Mauritius is safe and easy to explore. The locals are welcoming and even in the densest jungles, there aren’t any deadly spiders, snakes or mammals. 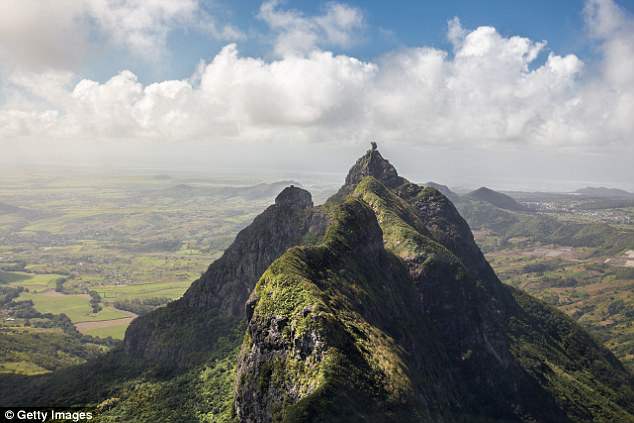 Le Pouce, a jaw-dropping column of rock on the island of Mauritius. Le Pouce means ‘The Thumb’ in French

I visited popular inland sights, such as the Chamarel Waterfalls, where the St Denis River plunges 272ft from a cliff into the rainforest below. Because of the heavy rain the falls were more spectacular than usual, filling the forest with misty spray. Black fruit bats, with their 3ft wing span, swooped ominously across the treetops.

The wild, jagged landscape is a reminder that Mauritius is a volcanic island that erupted out of the sea millions of years ago. I visited Seven Coloured Earth Park, a strange barren area of multicoloured rock in the middle of thick jungle, a relic of original lava formations. Today all Mauritius’s volcanoes are inactive.

As the rain continued, I felt sorry for those who had opted to stay at the beach. The monsoon drumming on the wooden roof of La Varangue sur Morne restaurant added to the adventurous atmosphere. The restaurant terrace hangs above a spectacular view and I felt like an intrepid explorer looking out through the tropical downpour.

That dramatic view inspired me to try some serious hiking. I heard there was a network of good paths leading to the vertical pinnacles of volcanic rock rising from the rainforest. 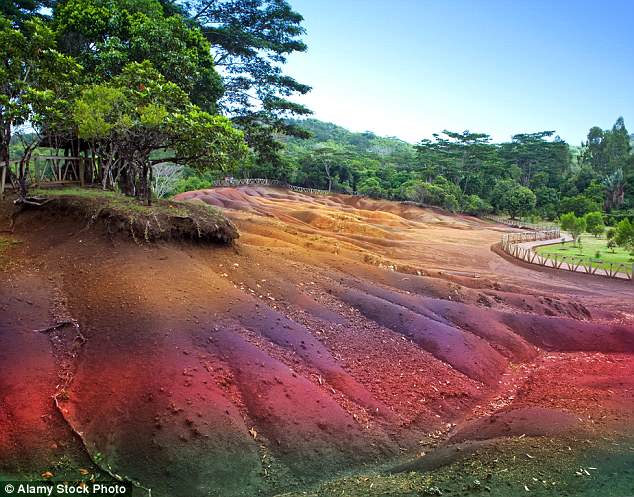 Mauritius is a volcanic island that erupted out of the sea millions of years ago. Pictured is some of the multi-coloured volcanic rock

The rain stopped and in temperatures of around 30C I soon dried off. I arranged a local guide to help me tackle a couple of the best mountains. How hard could they be? After all, even the tallest is 500ft shorter than England’s highest, Scafell Pike.

I should’ve realised that it wasn’t going to be quite that easy when my guide turned up. He was a 6ft 6in muscleman seconded from an army special unit for the day. I was instructed to call him by his nickname: ‘Zinc’.

He led me on a nine-mile trek to reach a sudden cliff. This was Piton de la Petite Riviere Noire, the island’s highest peak. We scrambled to the summit using ropes. Amazingly, at the top I found a painted park bench looking out over the wooded gorges below. Zinc explained this is a popular day trip for locals who have picnics up here as if they were having a stroll in the park.

If that wasn’t impressive enough, Zinc then took me up Le Pouce, another vertical column of rock, slightly shorter than Le Piton. Le Pouce means ‘The Thumb’ in French, which gives you an idea of the shape of this mountain. 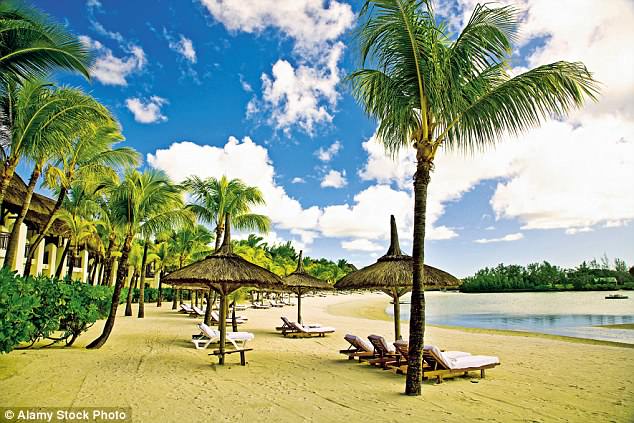 Zinc explained it is one of the most popular hikes on the island. The first man to climb Le Pouce was a young Charles Darwin in 1836.

It hasn’t got any easier in the intervening 182 years. I found it was another tricky scramble to get to the tiny summit. There was just enough room for a selfie of Zinc and me. But the views from the top were amazing.

I could also look down the coast lined by rows of expensive resorts. In my imagination I’m sure I could see people with itchy feet sitting on the beaches looking up at my mountain… and wishing they were up at the top, too.

This includes return flights with Turkish Airlines from Gatwick and B&B accommodation.