Home » Travel » From Bruges to Greenwich, here are ten beautiful destinations you can sail to for Big Ferry Fortnight – The Sun

ALL these amazing views . . . and they are just a sea ride away. As Big Ferry Fortnight kicks off this weekend, we show how easy it is to connect with incredible vistas across the country and Europe.

With a little help from Discover Ferries, here we list our top ten destinations. 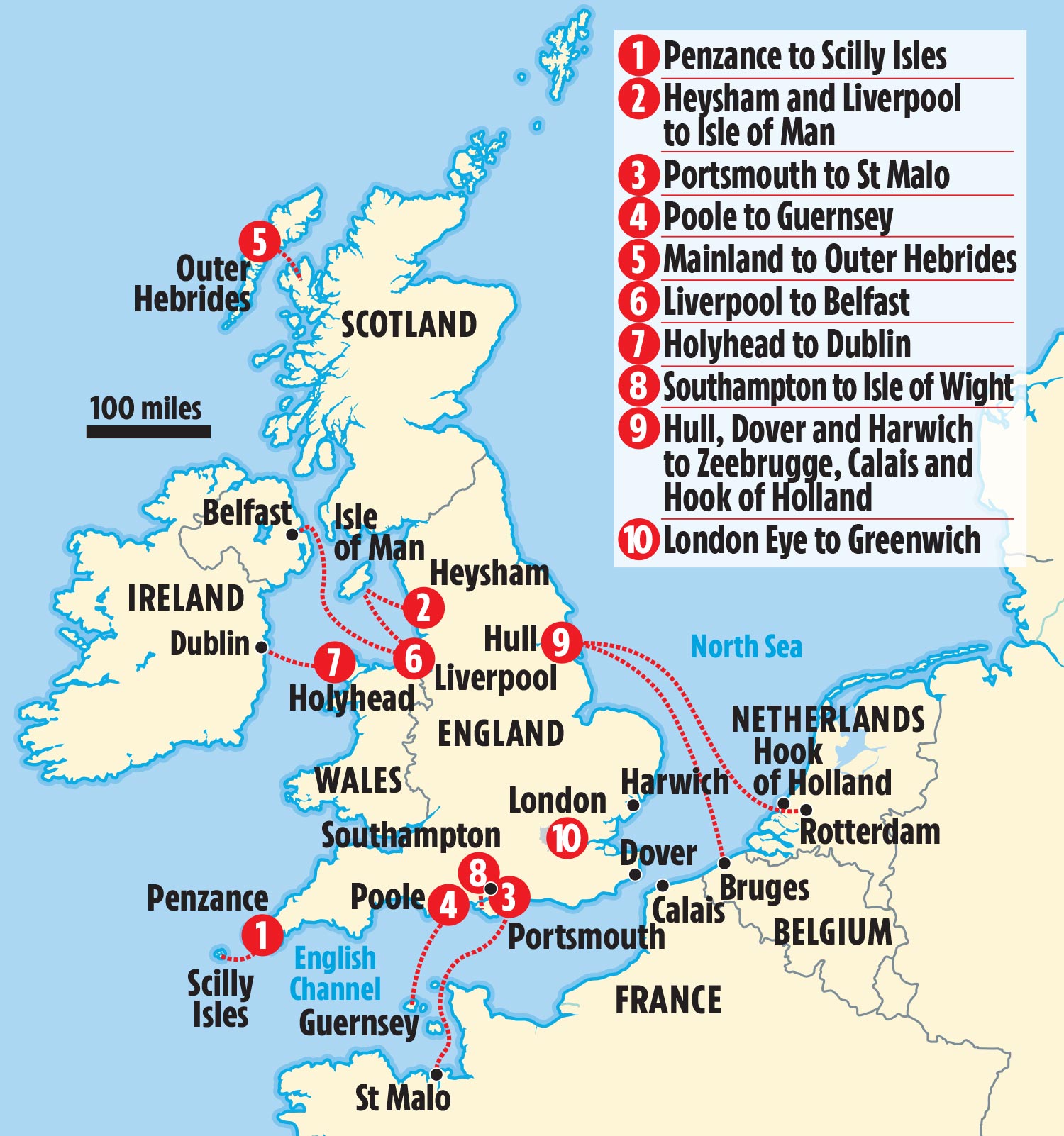 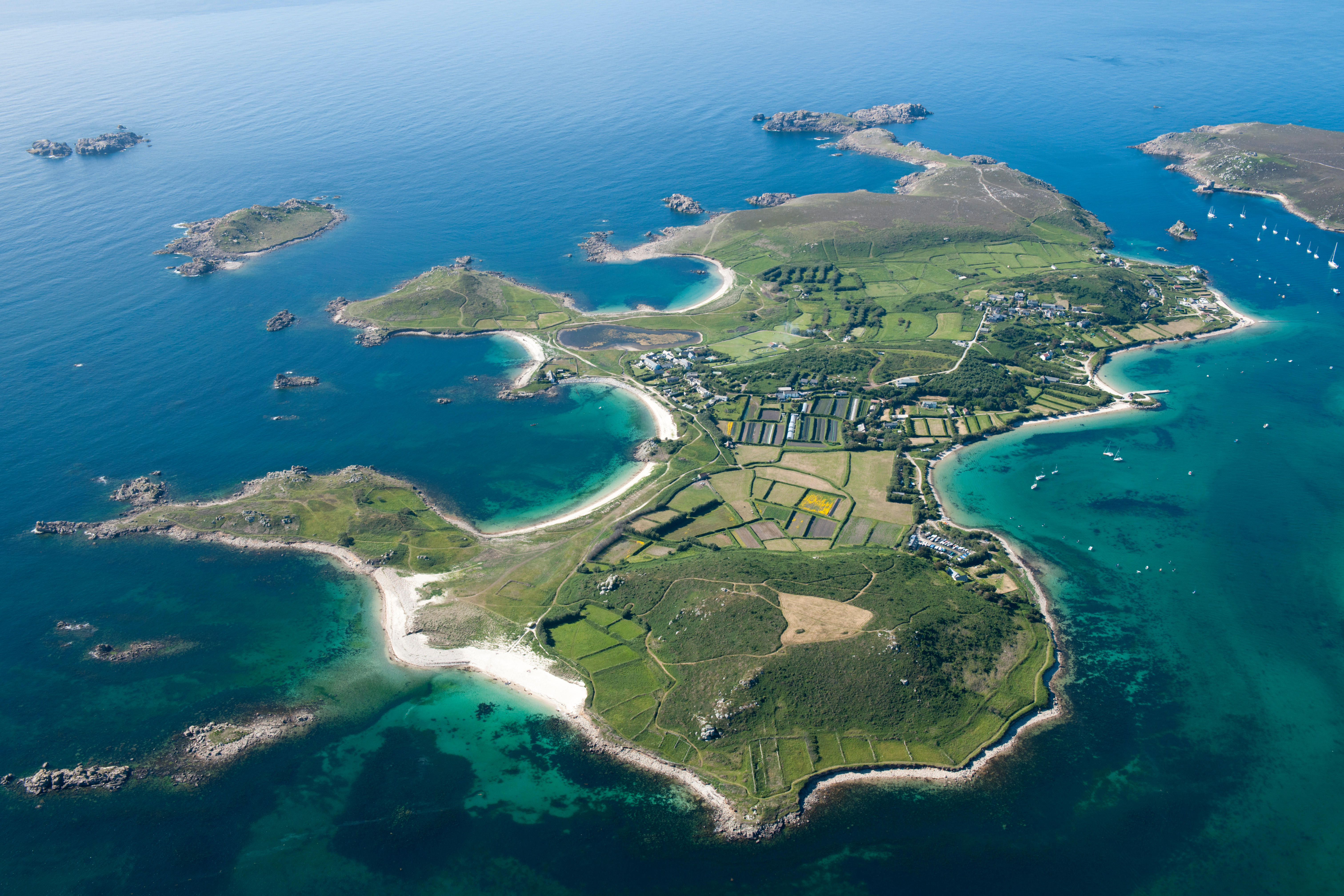 THE smallest of the inhabited islands in the Isles of Scilly, Bryher is just a mile and a half long and half a mile across. But it packs an incredible amount of variety into its gorgeous coastline.

With just one shop, cafe and bar, you will be able to escape and connect with the locals in stunning scenery. It takes two and a half hours to sail on Scillonian III from Penzance on the Cornish coast to St Mary’s on the main isle – before a short hop over to Bryher.

Find out more at islesofscilly-travel.co.uk. 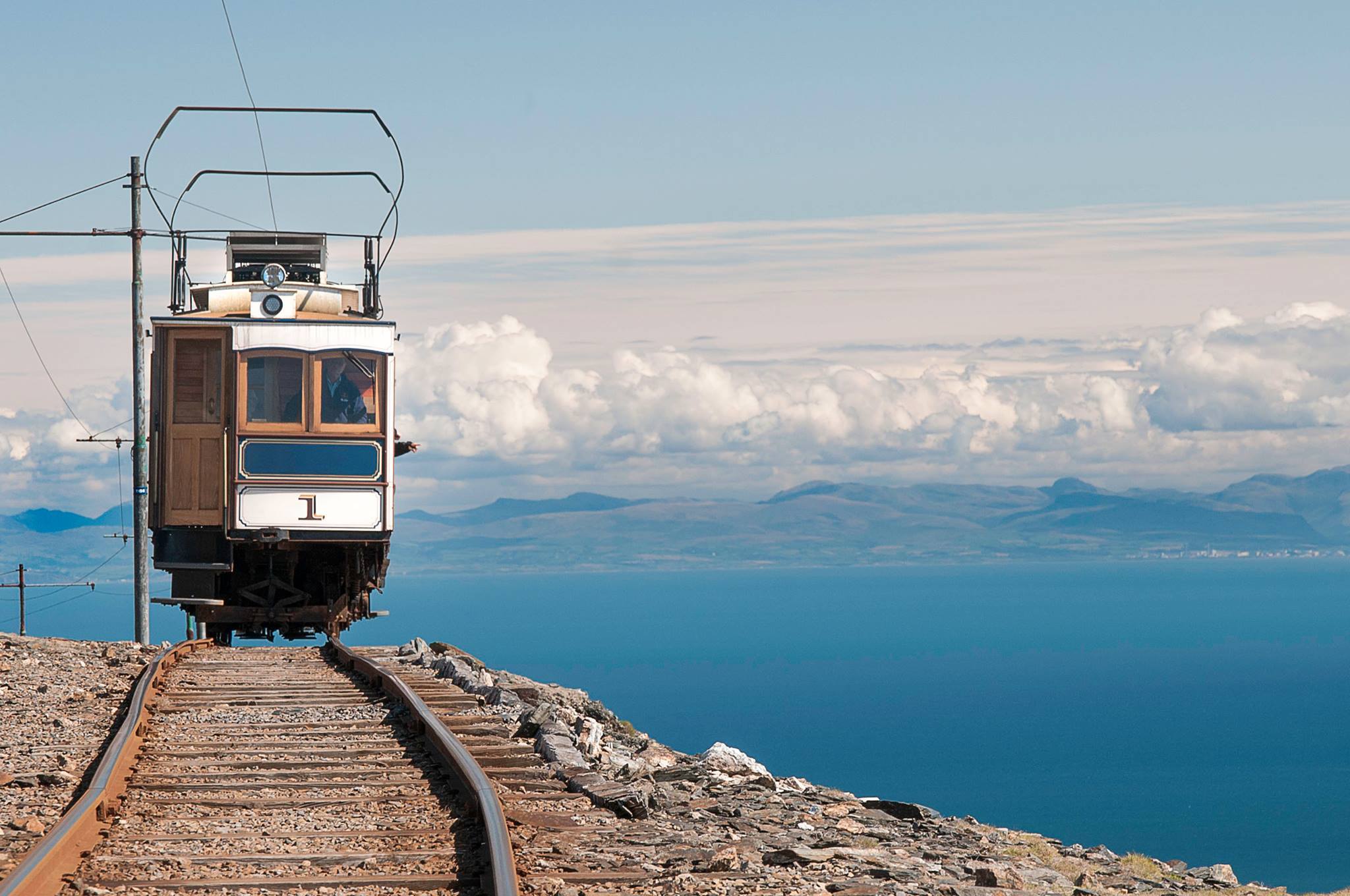 INHABITANTS of the Isle Of Man call them the Seven Kingdoms – England, Ireland, Wales, Scotland, Isle of Man, the heavens and the seas. And on a clear day you can see them all.

Getting there is an adventure in itself. You can travel five miles to the summit on the only electric mountain railway in the British Isles, which has been in operation since 1895.

Or climb aboard the Isle of Man Steam Packet Company from Liverpool or Heysham, Lancs. The journey takes around two hours, 45 minutes. 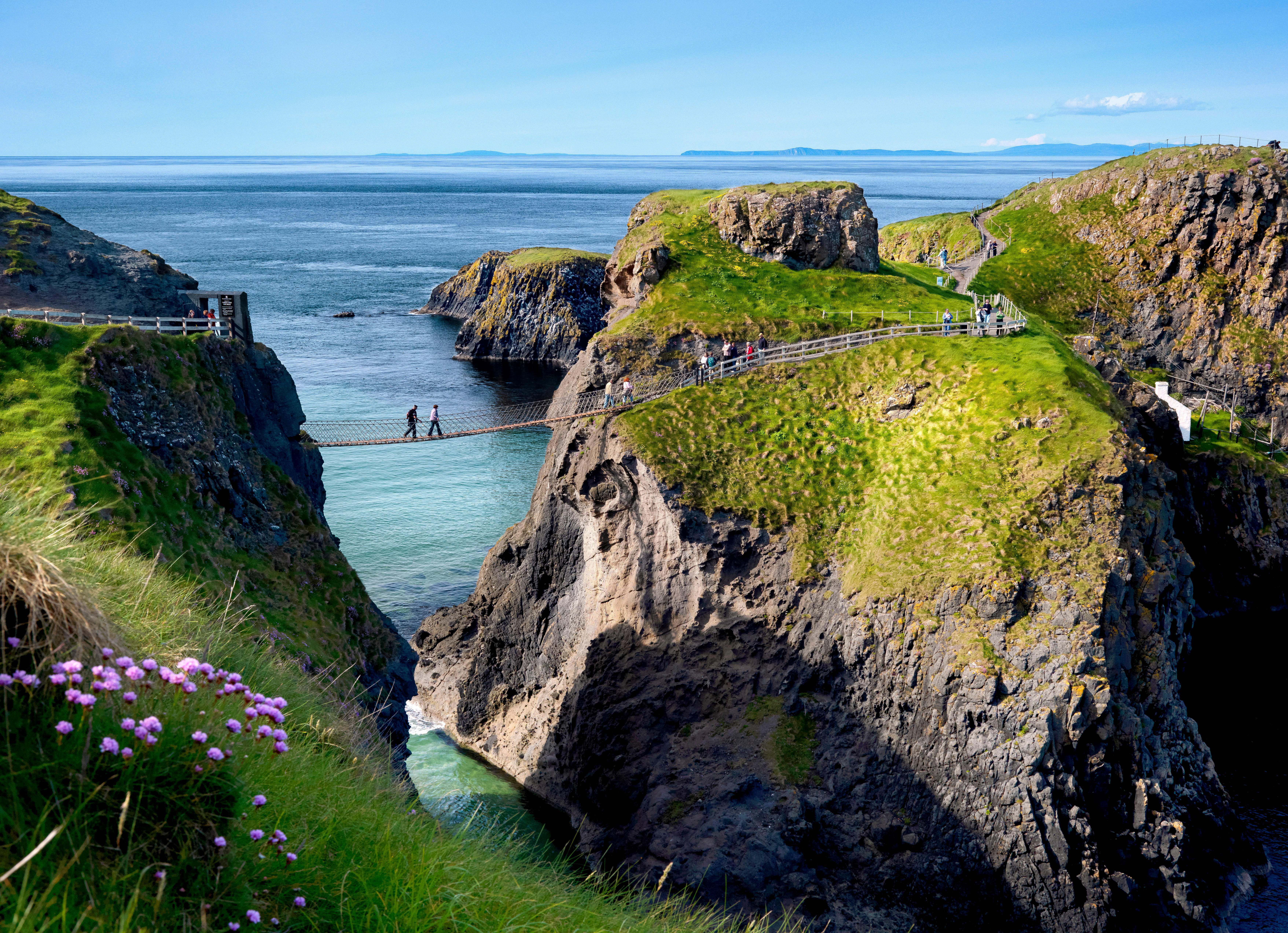 THE rope bridge to this tiny island on the Northern Irish coast in Co Antrim is an Instagram dream.

Now a National Trust property, the link to the island across the Atlantic Ocean was first erected by salmon fishermen in 1755.

Suspended almost 100ft above sea level, there are now timed tickets to cross to preserve this special place. But there are guided tours and walks for all-comers.

The location, just over an hour’s drive from the port of Belfast, is easily reached by P&O Ferries and Stena Line all year.

Discover Ferries’ Emma Batchelor says: “As an island nation, you are never too far from your nearest port.
“Ferry travel offers a great start to any holiday for those seeking freedom and adventure, whether that is catching a glimpse of marine wildlife from the deck or exploring the fantastic food outlets and entertainment available on board.” 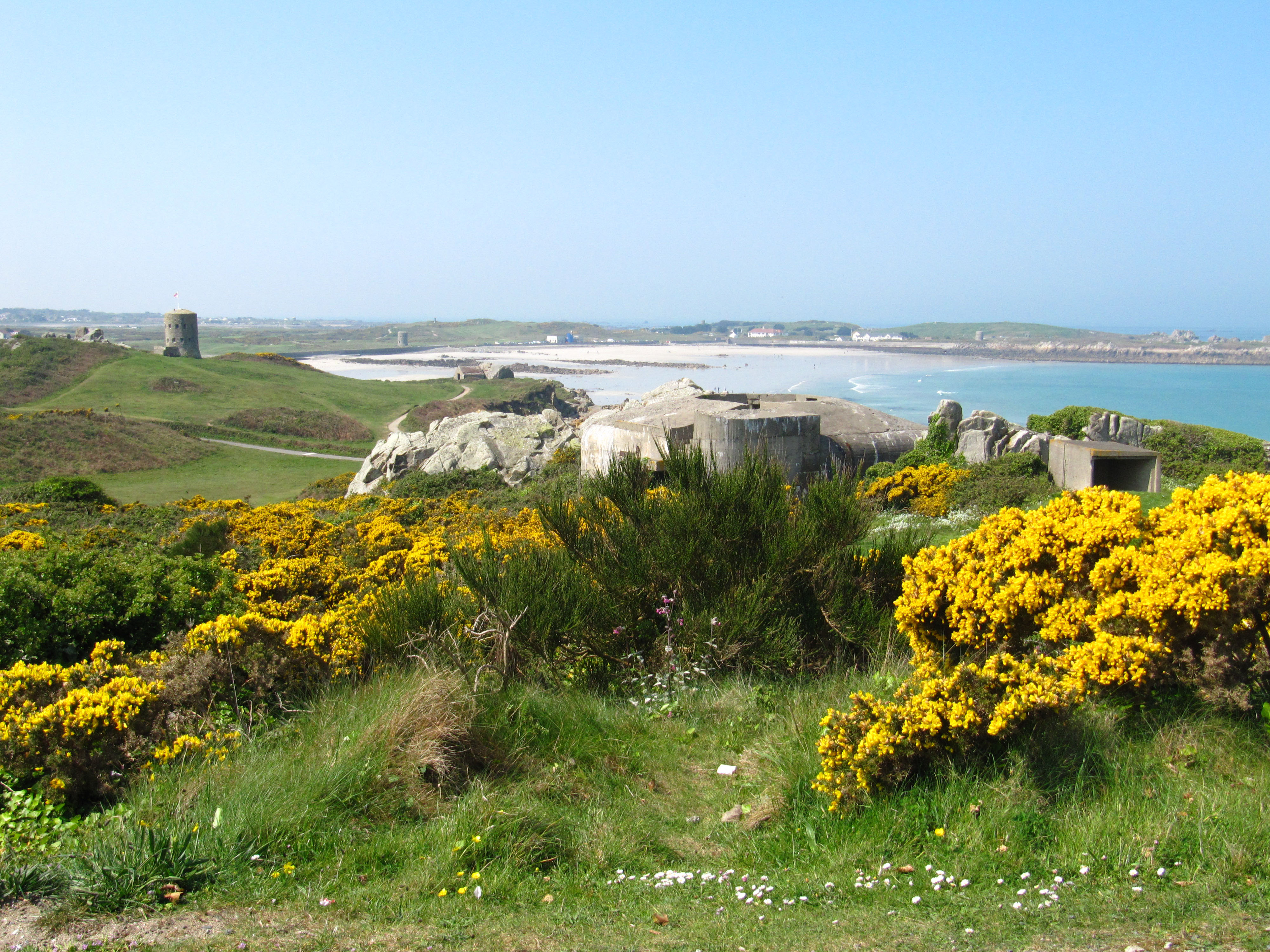 The oldest sites include La Varde Passage Grave, a large megalithic structure, and Le Dehus burial chamber. The Millennium Stone is worth a look too, although that is a real youngster, having been erected in 1999.

Go there with Condor Ferries, with sailings from Poole and Portsmouth to St Peter Port. The quickest takes just three hours. 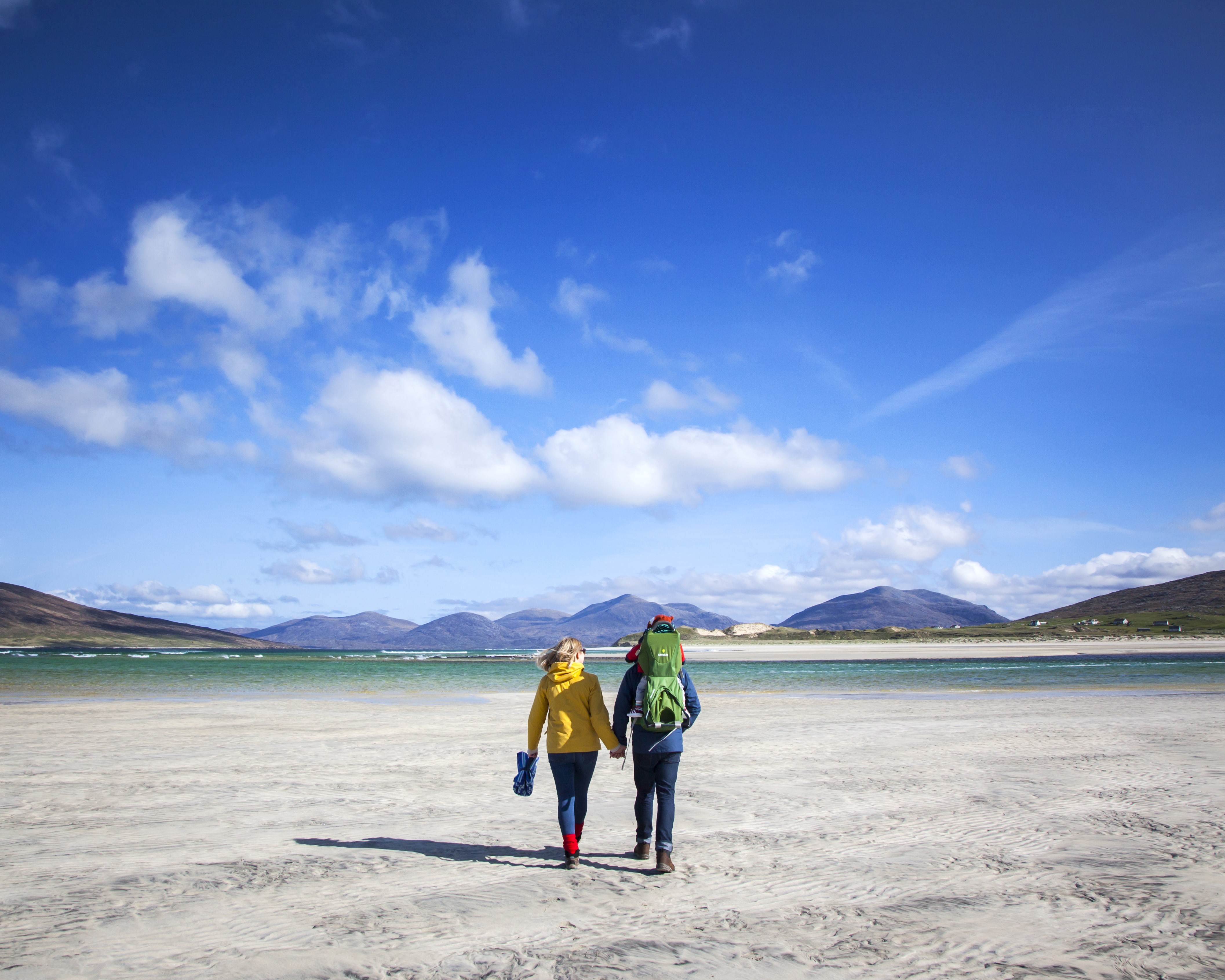 ON a sunny day, the beaches of the Outer Hebrides can put the Caribbean to shame. Aided by the Gulf Stream, there are creamy white sands aplenty on these remote, beautiful Scottish islands.

Must-sees include Vatersay Bay, with its sparkling, shallow waters and Luskentyre on the Isle of Harris. And Berneray’s West Beach lays a good claim to being the prettiest of them all, with a stunning stretch of shell sand.

The islands can be reached via a number of routes operated by Caledonian MacBrayne. 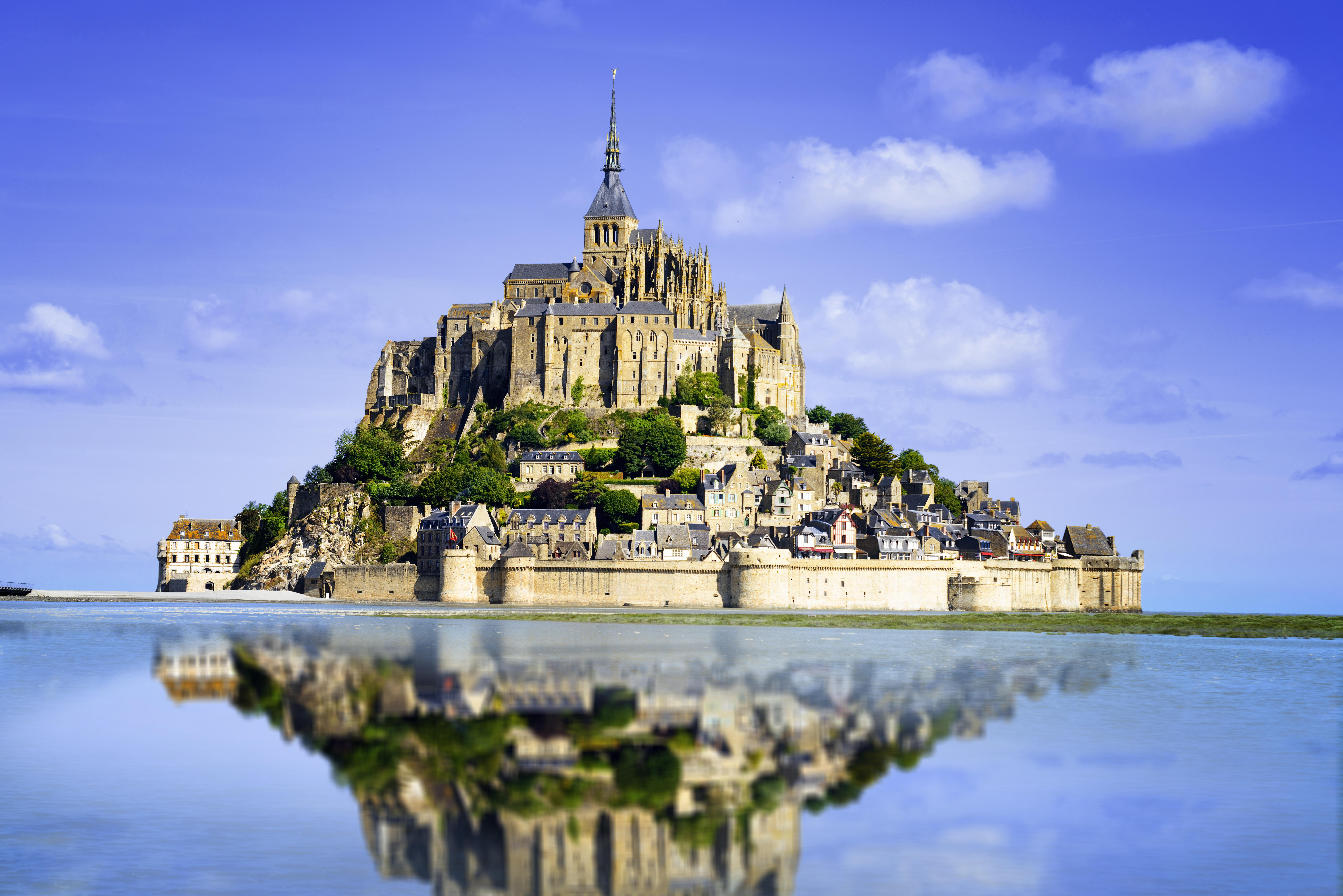 THIS magical island off Brittany is topped by a gravity-defying medieval monastery – one of France’s top sights. Set in a mesmerising bay where Normandy and Brittany merge, it has been a place of pilgrimage since the 8th Century.

Now tourists rather than pilgrims walk across to immerse themselves in the centuries of history. Getting to this gorgeous citadel could hardly be easier, with Brittany Ferries.

It takes just an hour from St Malo, where ferries arrive from Portsmouth. Or you can take a ferry from Plymouth to Roscoff.

Find out more at brittany-ferries.co.uk. 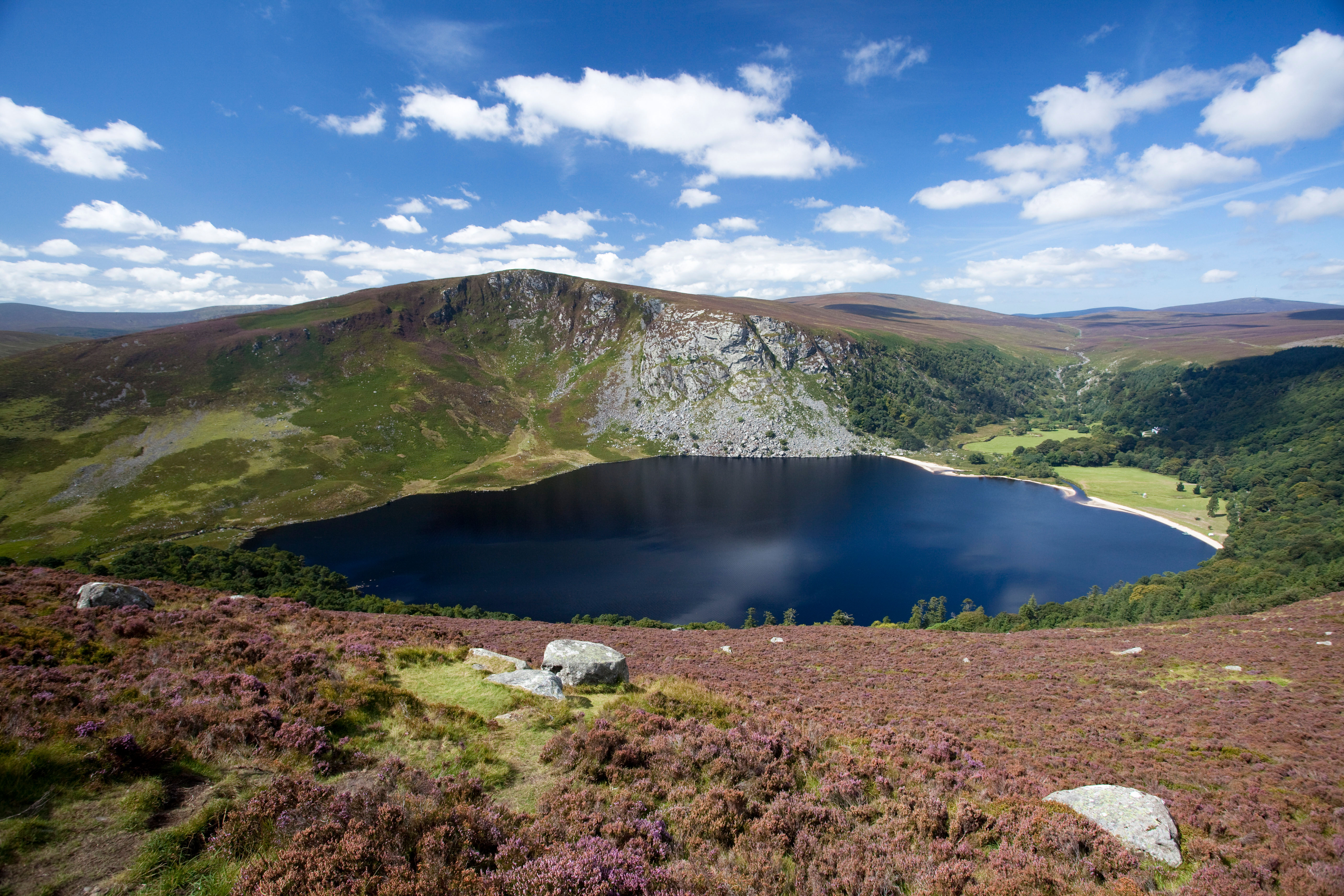 FONDLY known as the Guinness Lake, this spectacular body of water in the Wicklow Mountains National Park is fringed by a beach of pure white sand on its northern shore.

Its shape makes it look like a pint of the good stuff topped with a froth. Head for Military Road at the junction with Wicklow Way for the best place to drink in all its glory as the lake itself is on private property.

It is also less than an hour’s drive from Dublin port. Irish Ferries and Stena Line operate services from Holyhead year-round. 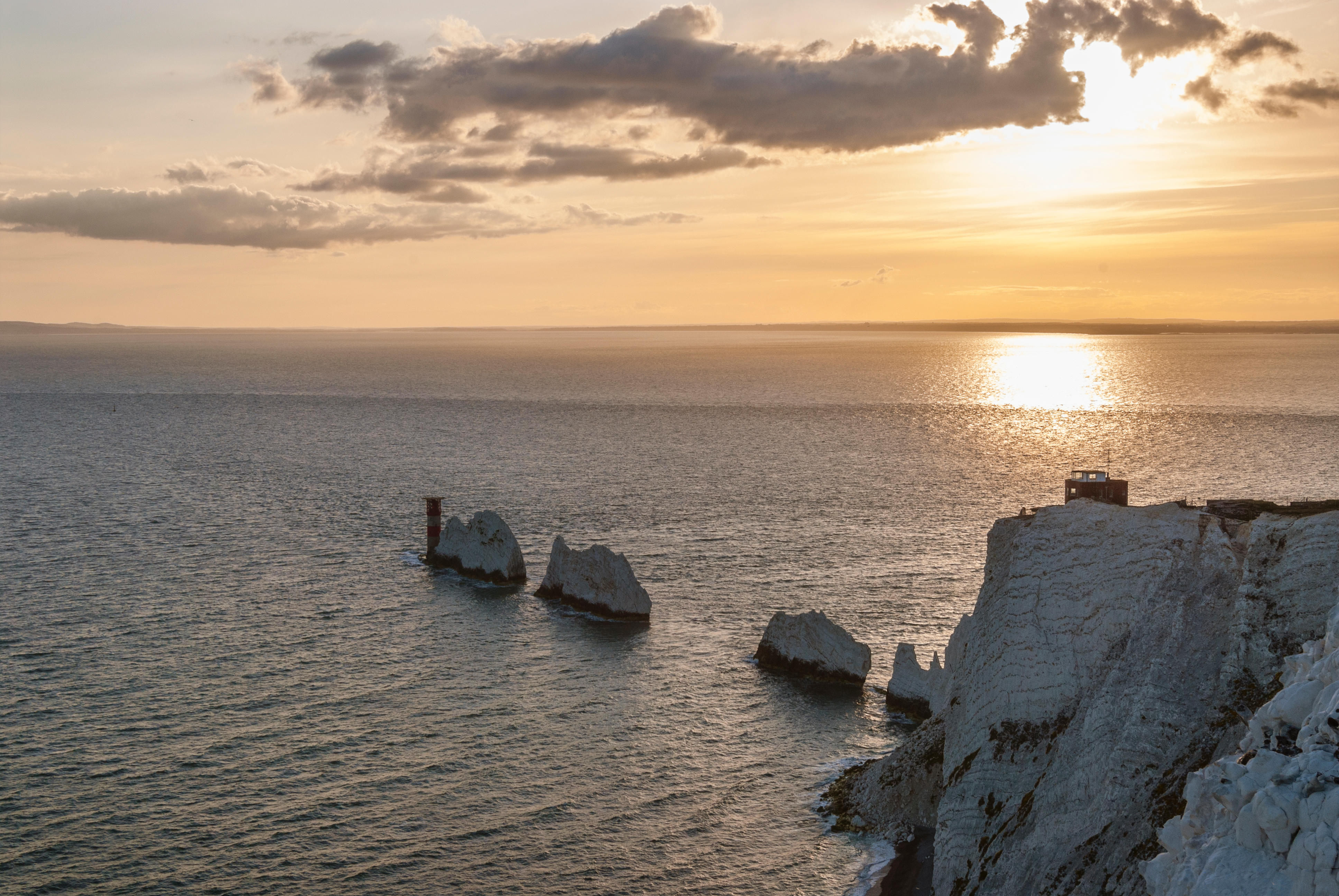 THIS favourite may be the natural wonder most associated with the Isle of Wight, but there is lots more to do here than simply admire the rocky coastline.

Take the chairlift ride to the beach and admire its full glory before recreating your own version with the coloured sands the island is known for. Then check out the 3D cinema and fairground rides.

You can also go on pleasure cruises around the rocks, the lighthouse and military forts that protected the shores.

Head across with Wightlink, Red Funnel and Hovertravel, which all offer fast and slow services. 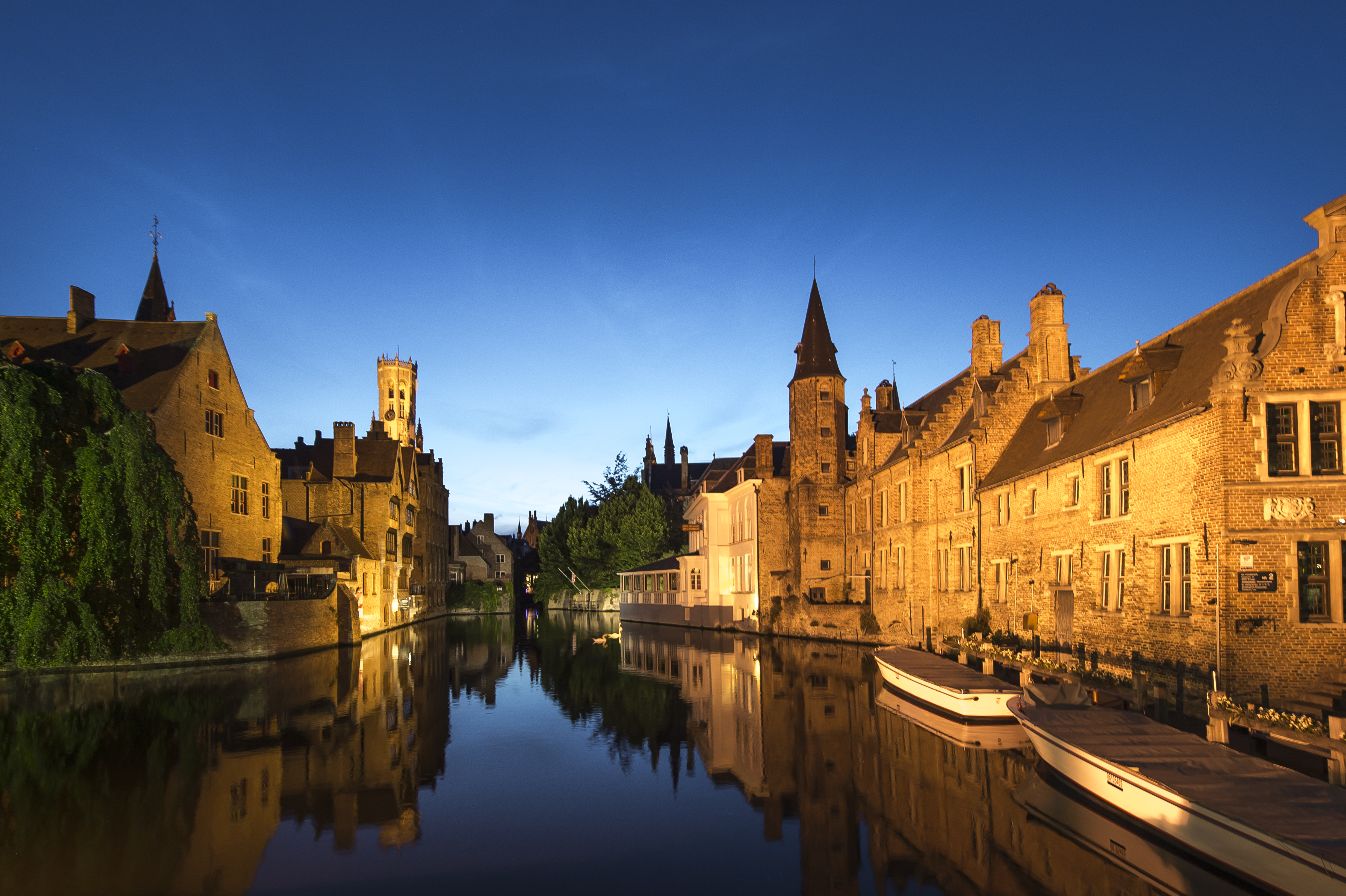 BEAUTIFUL Bruges in Belgium is an easy ferry ride from both the north and south of Britain. With its picturesque canals, cobbled streets and ancient squares, the medieval city is one of the best-preserved in Europe.

Spring is the ideal time to avoid the tourist crush. There are multiple ways to get there – P&O Ferries’ Hull to Zeebrugge – linked to Bruges by canal – and Dover to Calais routes; DFDS’ routes from Dover to Calais and Dunkirk plus Newcastle to Amsterdam, and Stena Line from Harwich to Hook of Holland. 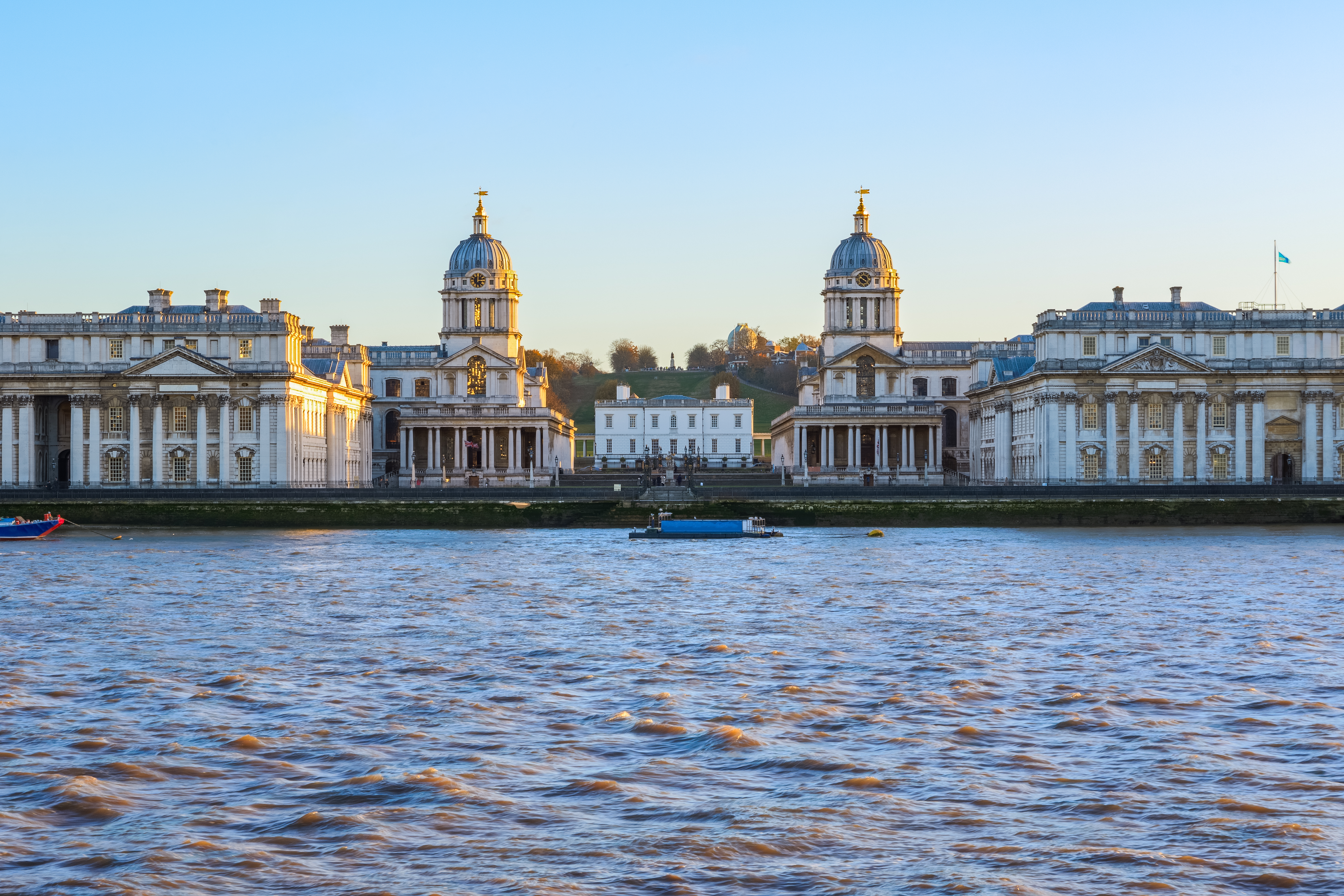 FERRIES do not just ply the waters of the Atlantic, North Sea and English Channel.

The mighty River Thames is also home to a host of ferries that connect the bright lights of London with historic maritime marvels along the river.

With Thames Clippers, it takes just 40 minutes to travel from the centre of London to the south of the capital to visit the Greenwich Royal Naval College and Royal Observatory, home of Greenwich Mean Time (GMT) and the prime meridian of the world.