Home » Travel » From UFO treehouses to ice hotels, Sweden's cool all year round!

From UFO treehouses to ice hotels – and bone chilling Arctic baths, Sweden’s cool all year round!

For a stunning break less than three hours from the UK, Sweden offers a wealth of experiences to enjoy at any time of the year, whether you want to explore on foot, drive through spectacular scenery or simply relax in a luxury spa.

Here are some of the best you can book this autumn.

SPOT THE NORTHERN LIGHTS FROM YOUR TREETOP BED 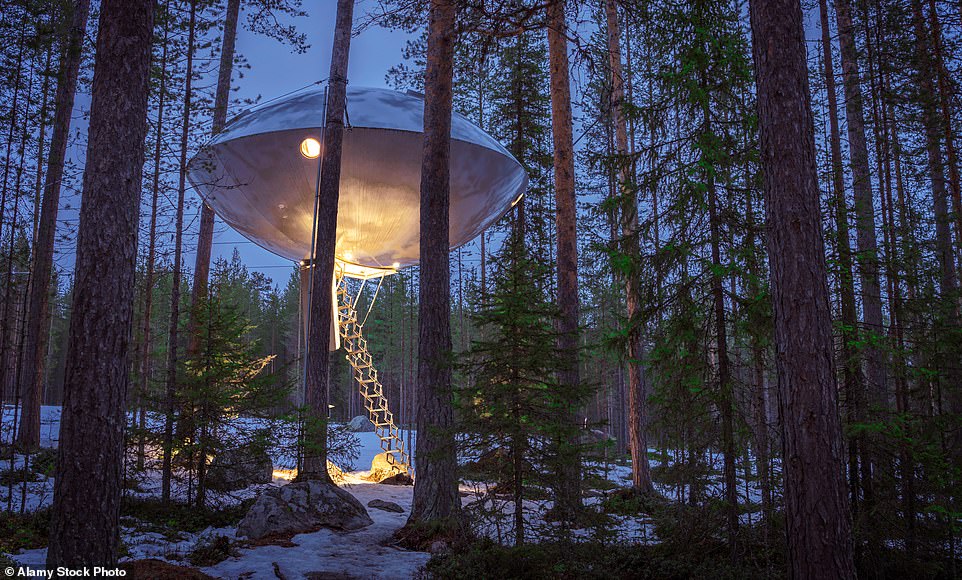 Treehotel, in Harads, has accommodation ranging from a mirrored cube to a ‘floating’ domed UFO (pictured)

There’s no need to wait for deepest winter to see the Northern Lights, as they are at their most active from around this time of year. Spot them on a Northern Lights walk during a three-night break in Swedish Lapland, staying in one of the modern log cabins at Brandon Lodge. A wilderness skills session is included, where you’ll learn survival techniques such as fire-making.

Afterwards, head inland for a night at the Treehotel in Harads, which has unique treehouses placed high in the pines. Accommodation ranges in style from a mirrored cube and a bird’s nest to a ‘floating’ domed UFO. All have minimalist Scandi-chic interiors.

Then go zip-wiring, take a forest hike or head off on a moose safari, before dining 30ft up in the trees and another chance to spot those elusive lights.

Book: Four nights’ half board, plus lunch at the Treehotel, costs from £1,710pp, with flights and transfers (bestservedscandinavia.co.uk).

SEE THE CAPITAL WITHOUT BREAKING THE BANK 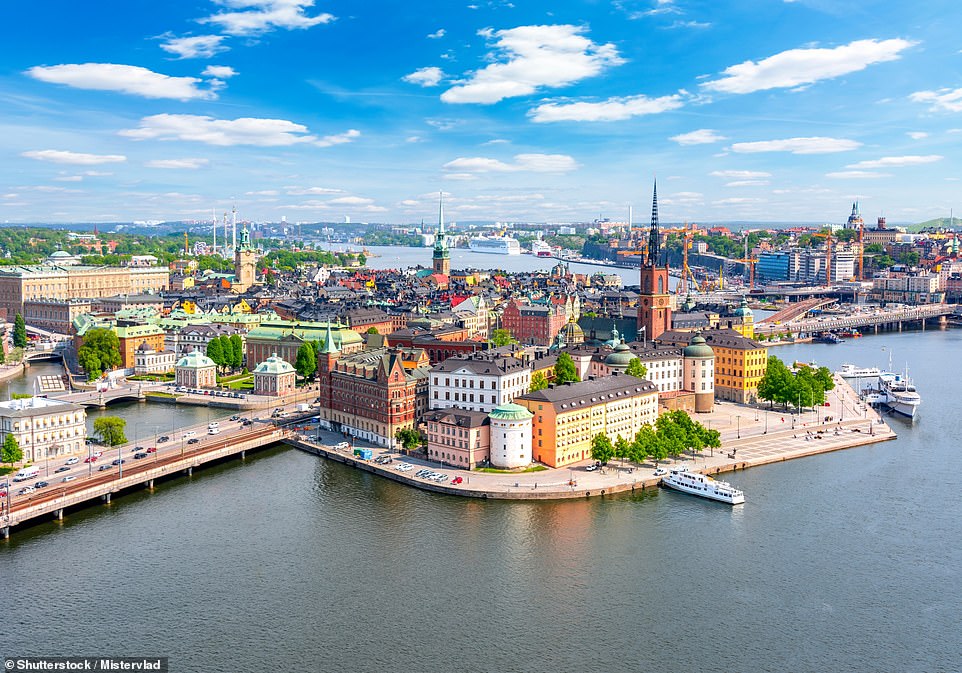 Charming: The words budget and Sweden don’t usually feature in the same sentence, but you can cut costs on a Stockholm city break 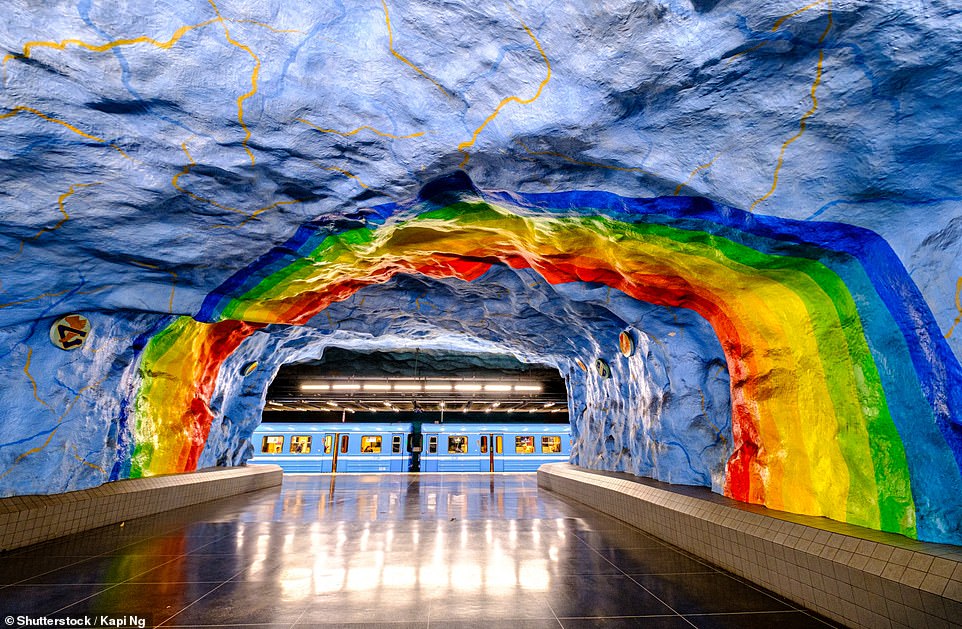 While it’s easy to see the city on foot, it’s worth buying a metro pass (£14 for 24 hours) which includes ferries around the archipelago. Pictured is Stadion metro station

The words budget and Sweden don’t usually feature in the same sentence, but you can cut costs on a Stockholm city break.

Stay in the revitalised Brunkebergstorg area, which is near the station for an easy airport transfer (£14). The public areas at Hobo boutique hotel are a riot of colour, but its bedrooms are more calming, with lots of pale wood, guidebooks pegged to the wall and a bit of an Ikea vibe.

While it’s easy to see the city on foot, it’s worth buying a metro pass (£14 for 24 hours) which includes ferries around the archipelago. Get a great view of the old town, Gamla Stan, and the Royal Palace from Skeppsholmen (note that the changing of the guards ceremony is currently suspended). And using a metro pass gives you access to the incredible art on display in the subway stations.

For food, eat well at midday – many restaurants offer a special lunch of the day (dagens ratt) at a reasonable price – and turn to cheap food trucks in the evening.

PACK YOUR BOOTS FOR 600 MILES OF WALKING 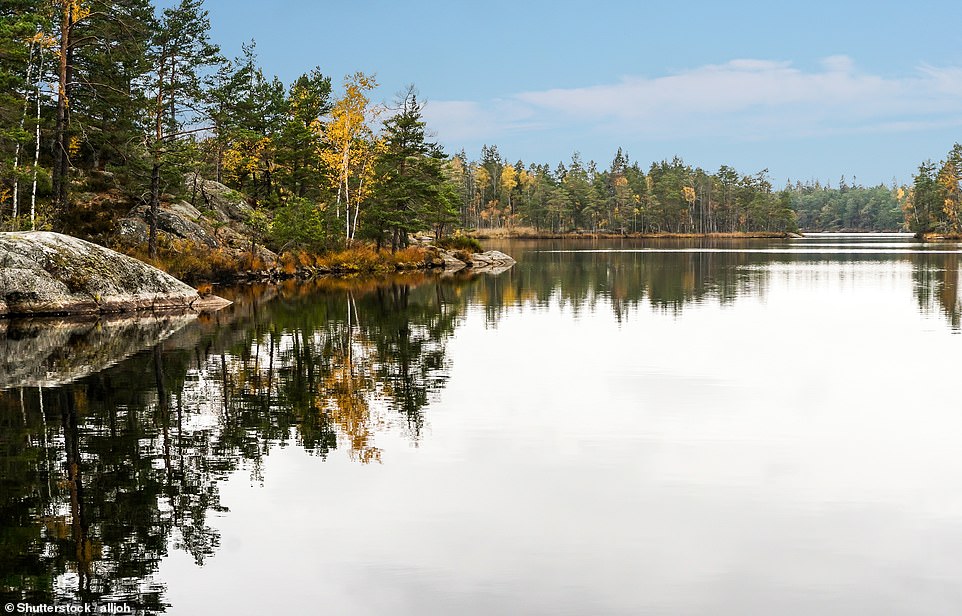 Running through the wilderness of Sormland, south of Stockholm, is a 600-mile walking trail that takes in coastline, dense forests and beautiful lakes. You can walk what is probably the best 60-mile section on a new trip from the Natural Adventure Company, starting in Nynashamn on the coast and ending in a suburb near the capital.

Hikes take in pine and deciduous forests, including the Tyresta National Park. There are Iron Age castles and Viking rune stones to see, and the option of taking a boat trip to Nattaro Island.

Luggage is transferred ahead for you, with nights spent in hotels and guesthouses. You can start the week-long trip any time in October.

Book: The six-night Sormland Way hike costs from £855pp; the seven-night Osterlen Way trip costs from £955pp. Both options are on a B&B basis but exclude flights (thenaturaladventure.com).

TRY A WIDESCREEN VIEW OF THE BEAUTY OF NATURE 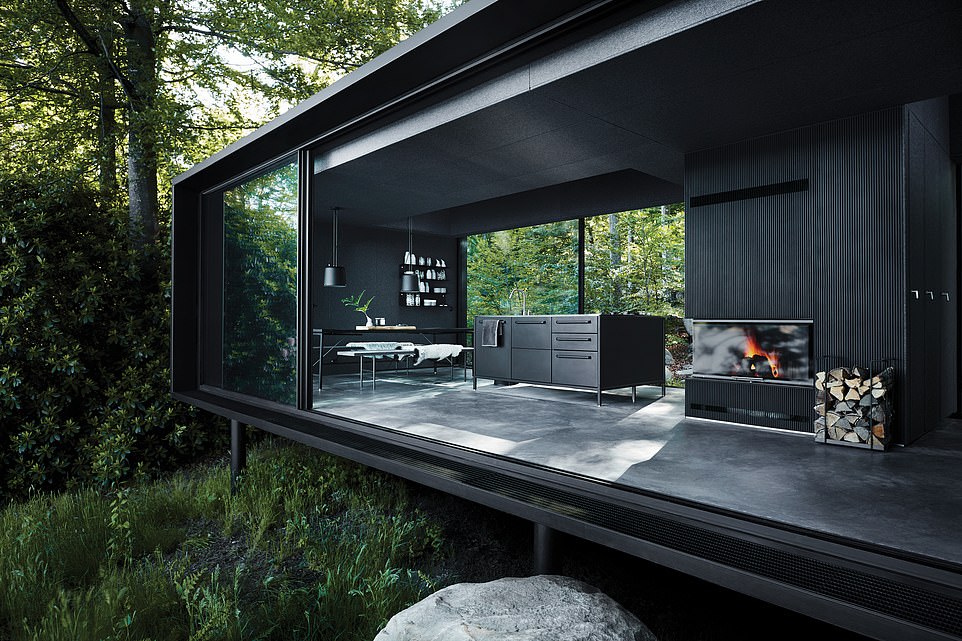 You don’t have to rough it to enjoy nature – the stylish lakeside Vipp Shelter is surrounded by woodland on the banks of Lake Immeln.

Designed by one of Scandinavia’s most famous architectural firms, Vipp Shelter has a state-of-the-art kitchen, wood-burning stove and underfloor heating. There isn’t a television, but floor-to-ceiling windows give you a widescreen to nature and the changing colours of the forest outside. Hike through the trees or take a boat out on to the lake from the private wooden pier, then return to curl up in the glass-ceiling loft bedroom.

GET YOUR CLAWS INTO A LOBSTER SAFARI 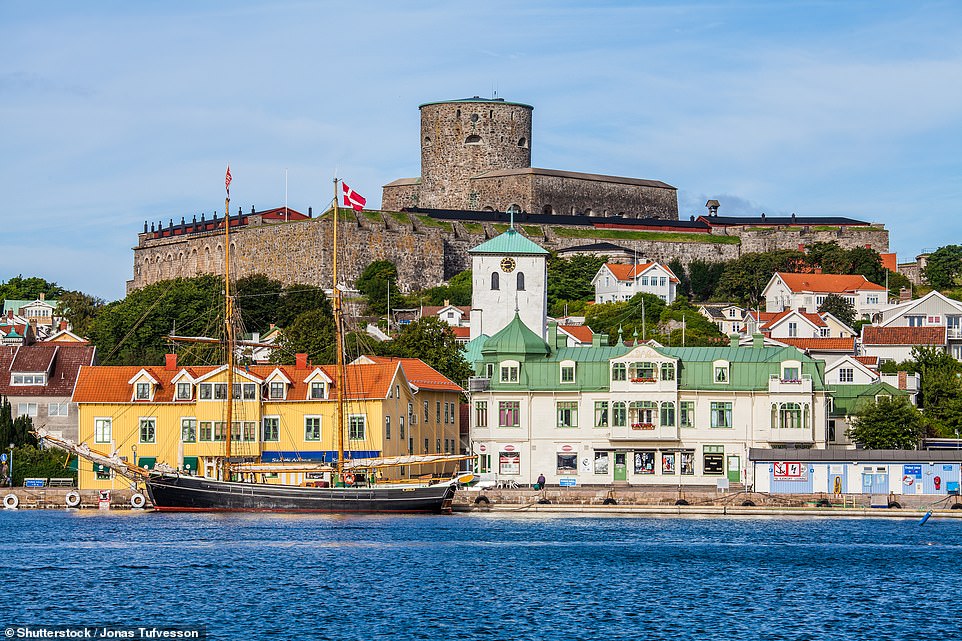 Slip into the slow lane and potter up the coastline from Gothenburg to Fjallbacka, taking in islands kissed with brightly painted houses and staying in pretty villages.

Seafood-lovers will be spoilt, with excellent restaurants in Gothenburg and a chance to go on a lobster safari from Fjallbacka, catching your own supper before returning to the hotel to cook it. You can also take a boat from Fjallbacka to the remote and rocky Weather Islands.

Other highlights include the 17th Century fort on Marstrand, Bronze Age rock carvings near Tanumshede and a visit to Nordens Ark wildlife park, which is home to many endangered animals. 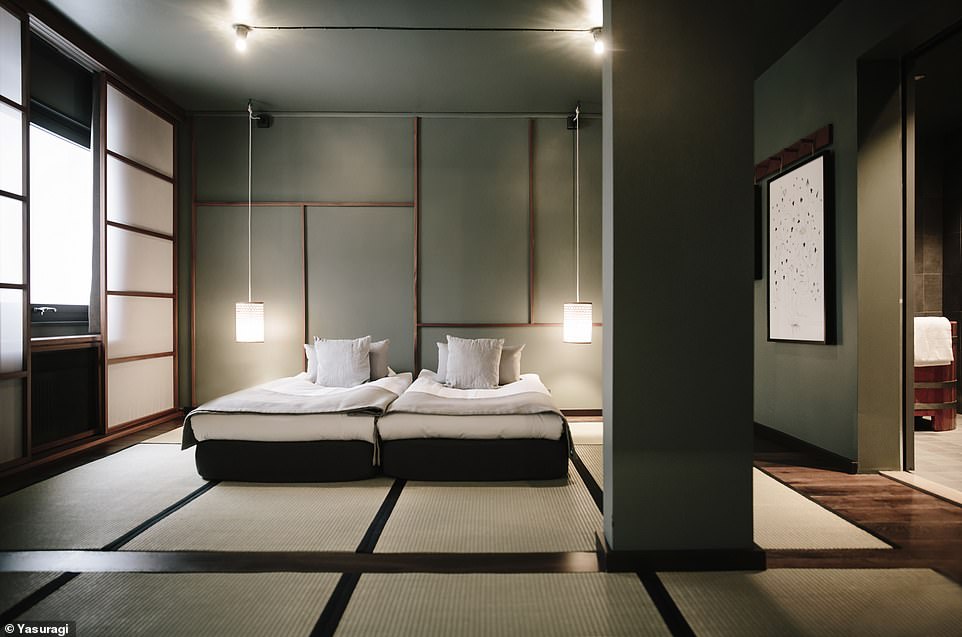 Japanese-style hotel Yasuragi is located 30 minutes from the centre of Stockholm. Pictured is one of the bedrooms 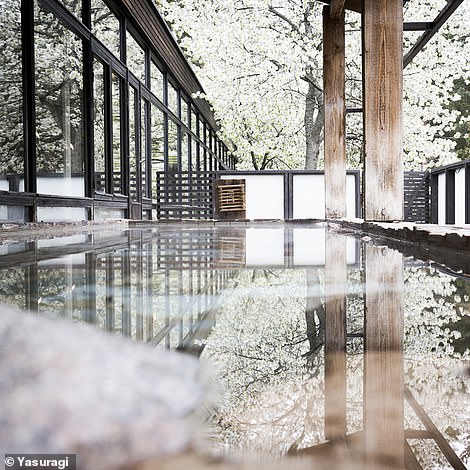 Head to the sauna, alpine tub and outside pools with sea views

Whether you’re into wine or wellness, you can indulge your passion in one of two hotels just outside Stockholm. There are no vineyards here, of course, but there is The Winery Hotel in the northern suburb of Solna, which produces 10,000 bottles a year using grapes from its own Tuscan estate.

The wine is made in the impressive high-ceilinged lobby, where you can enjoy a guided wine tasting, or use a pre-paid card for the wine dispensers. There’s good Italian food in the restaurant (with a bulging wine list), and a heated open-air pool on the top floor.

If onsen-style bathing is more your thing, check out the Japanese-style hotel Yasuragi, near Hasseludden, 30 minutes from the centre of Stockholm. Get changed into the supplied swimwear and head to the sauna, alpine tub and outside pools with sea views.

Sliding window screens in the pared-down rooms open on to sublime views of the Stockholm archipelago, while many rooms have futons and tatami mats, giving the feel of a traditional ryokan (inn).

Book: B&B at The Winery Hotel costs from £120 a night (thewineryhotel.se). Two nights’ half board for two at Yasuragi with one lunch costs £528 (yasuragi.se). 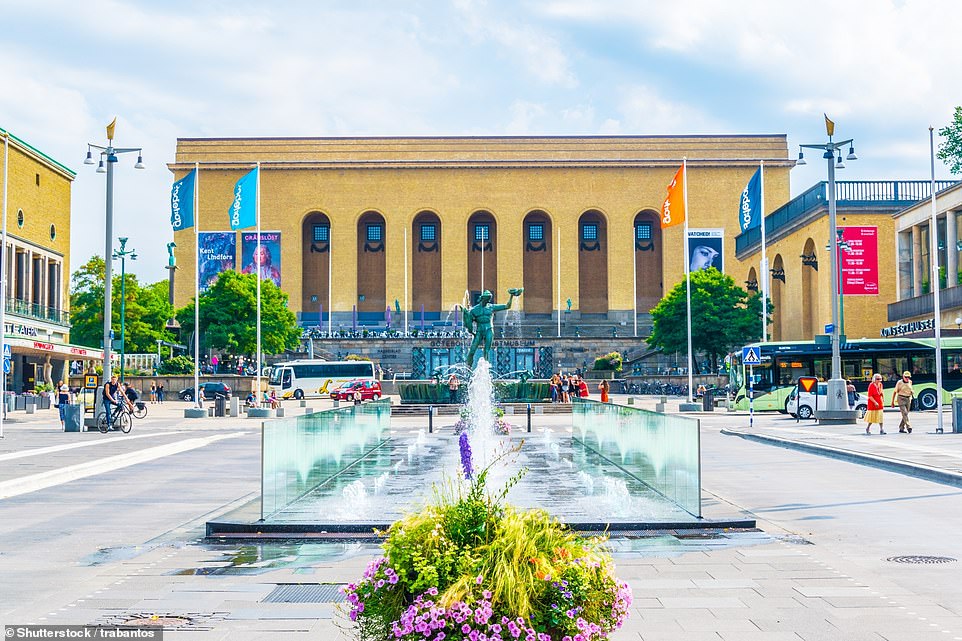 Visit the Gothenburg Museum of Art, above, with its collection of 20th Century Nordic paintings 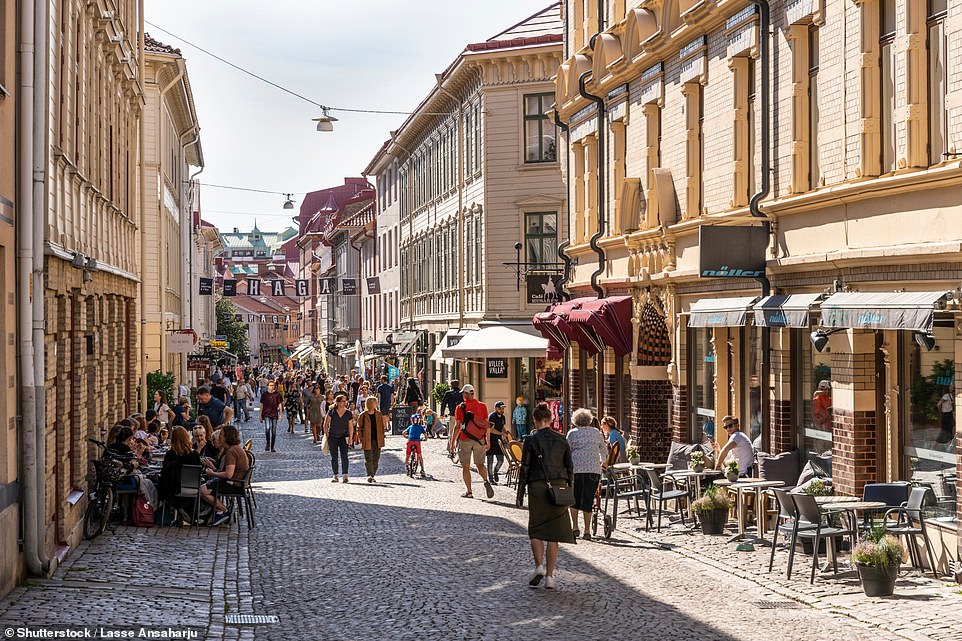 The city of Gothenburg is uber-cool, with plenty of cutting-edge fashion, art and creative cuisine.

Like Stockholm, it has an archipelago that can be reached by ferry. Water plays an important part in the laid-back port city, with its Dutch-designed 17th Century canals. Unsurprisingly, the seafood is superb.

Although the indoor fish market, Feskekorka, is closed for refurbishment at the moment, you can sample everything from oysters and cava at the bar to a full seafood dinner at Fiskbar in the Magasinsgatan neighbourhood. Here, too, you will find a branch of Da Matteo, the place to go for enormous sourdough cinnamon buns (there’s also a cardamom version), and the hip restaurants, bars and vegan cafes of Tredje Langgatan are nearby.

Visit the Gothenburg Museum of Art, with its collection of 20th Century Nordic paintings, the Liseberg Amusement Park or the vintage shops in the quaint Haga district.

One of the best places to stay in town is the centrally located Clarion Hotel Post, which mixes modern design with its history as an old post office, and comes with a rooftop pool offering great city views.

ARE YOU BRAVE ENOUGH FOR AN ARCTIC BATH? 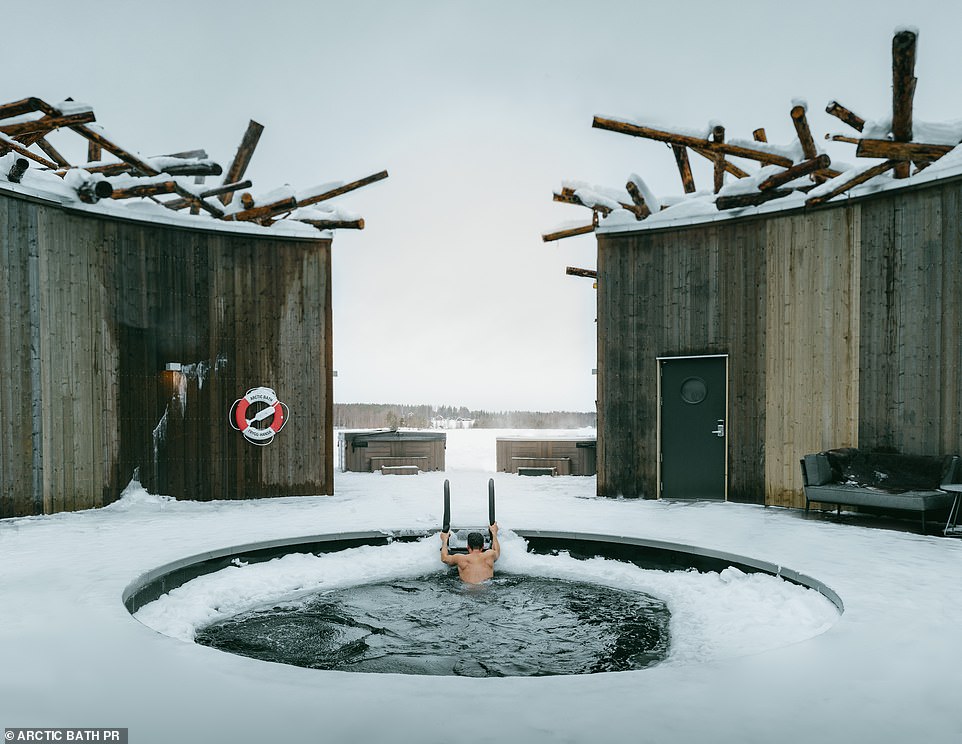 View to a chill: The circular central spa at Arctic Bath, which is filled with ice-cold river water, and two of its saunas

What looks like a bird’s nest or a jumble of logs floating on the Lule River forms the hub of the incredible Arctic Bath.

Here lies the circular central spa filled with ice-cold river water into which brave guests plunge before racing to warm up in the semi-circle of surrounding saunas.

Deep in the forest near Harads, the spa also offers traditional treatments plus a range of activities that include Northern Lights photography sessions, horse-riding and even a moose safari. Beware if you take the last: the restaurant’s five-course gourmet meal may feature a relative of the creatures you spot, as well as reindeer and fish.

Half of the 12 wood-and-stone cabins float on or are frozen into the river, while the others are on land nearby, with enormous windows looking out on to the river.

Book: Three nights’ half board in November costs from £1,710pp, with flights, transfers and spa entry. Arctic Bath opens on November 21 (sunvil.co.uk).

A WARM WELCOME AT THE HOTEL MADE FROM ICE 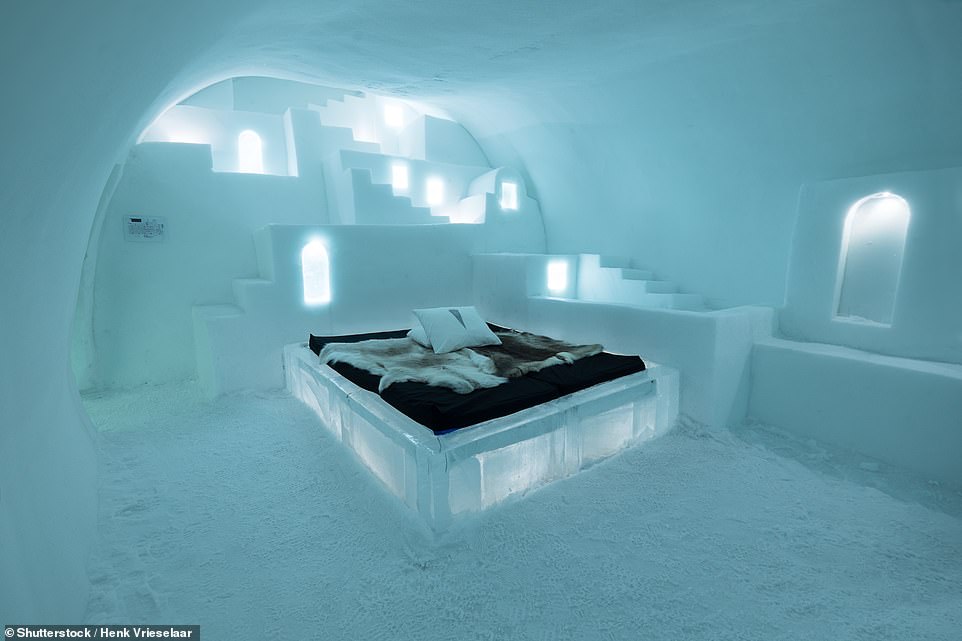 At Icehotel 365 temperatures don’t rise above minus 5C, though beds come with with reindeer skins and thermal sleeping bags

You don’t have to wait for winter to sleep in a room created from ice: the Icehotel 365 is, as its name suggests, open all year round.

Next to the site where a new ice hotel is created each year, it has nine suites inside a turfed-roof building cooled by renewable energy. Temperatures don’t rise above minus 5C, though beds do come with reindeer skins and thermal sleeping bags.

Before settling into your own mini Narnia, get some Dutch courage in the ice bar with a drink or two (on the rocks, of course) or champagne in hand-made glasses carved from ice.

A night at Icehotel 365 (which has much lower room rates outside the winter peak) features as part of a five-night break that includes a stay in the branches of the Treehotel at Harads followed by a four-hour train journey to Kiruna and Camp Ripan.

Both have plenty of activities, with a forest spa at the Treehotel and an Aurora Spa at Camp Ripan that is perfect for spotting the spectacular Northern Lights.

Book: Five nights’ B&B, with one night in Icehotel 365 and two nights each at the Treehotel and Camp Ripan, costs from £1,695pp, with flights (magneticnorthtravel.com).