A LUFTHANSA passenger was left fuming when he spotted his abandoned suitcase on the airport tarmac, despite being told it had been loaded.

Karn Rateria was travelling from Manchester to Munich when he saw his luggage out of the plane window. 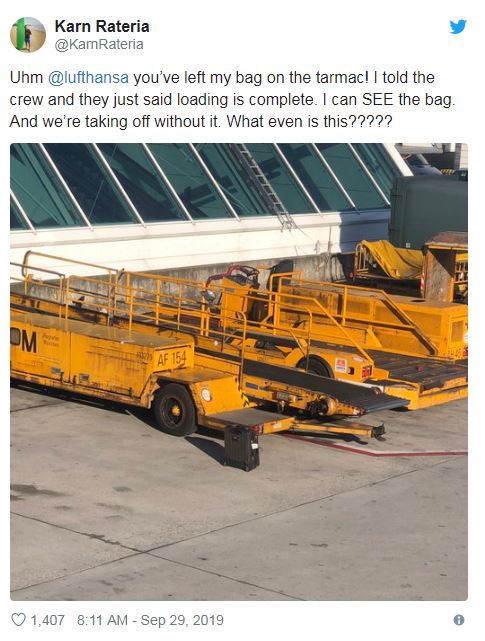 He tweeted the airline with a picture of his bag, asking: "Uhm @lufthansa you’ve left my bag on the tarmac!

"I told the crew and they just said loading is complete.

The tweet has had more than 1,000 likes since, with social media users feeling his pain.

Another added: "So close and so far at the same time."

Someone said that at least it saved him from having to "wait at the baggage belt and later find out" his bag was gone.

However, it was made even worse by the airline themselves.

Following his complaint, Lufthansa replied: "Very sorry for that. There was an outage of the baggage system at the airport in Frankfurt. My colleagues are doing their best to locate the bags and send them as quick as possible."

Karn was quick to jump in explaining that he wasn't at Frankfurt, and was at Munich instead.

Someone replied: "Lufthansa tweets about baggage outage in Frankfurt but you were flying Munich to Manchester….strange justification." 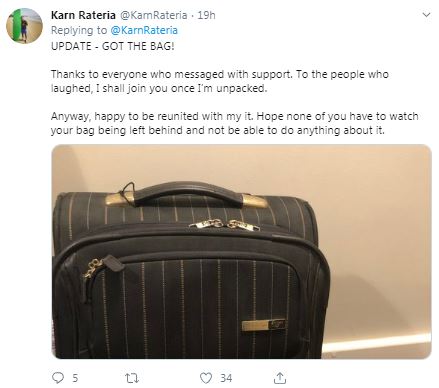 Thankfully the story had a happy ending – with the bag arriving afterwards.

He tweeted: "UPDATE – GOT THE BAG! Thanks to everyone who messaged with support.

"To the people who laughed, I shall join you once I’m unpacked. Anyway, happy to be reunited with my it."

He added: "Hope none of you have to watch your bag being left behind and not be able to do anything about it."

Last year, a flight attendant spotted a rogue suitcase escaping on the tarmac, rolling across the airport at speed.

A catering cart caused chaos at Chicago Airport earlier this week, after spinning out of control and narrowly avoiding a plane.