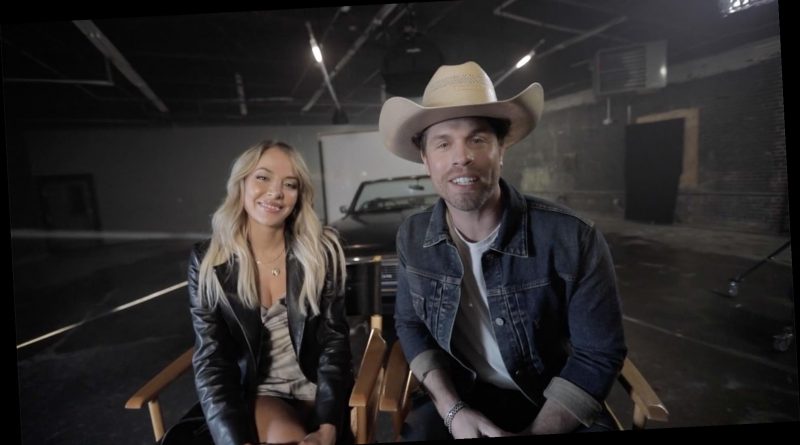 Dustin Lynch took a lesson from The Voice when it came to finding a new duet partner for his latest single, "Thinking 'Bout You."

After plans to record the song with former tour mate Lauren Alaina fell through due to scheduling conflicts, the country singer, 35, decided to hold a blind audition for female vocalists to submit themselves for the part.

"I wanted to stay in the clear of being persuaded by the name or if I knew who the artist was," Lynch tells PEOPLE. "So I asked my team to remove the names from the submissions of the auditions and number them. Then I would listen blindly and make my decision based on who delivered the song the best. I kept coming back to one version over and over again. We all kind of gravitated towards the same version." The voice behind the version Lynch and his team were drawn to? MacKenzie Porter's.

"When we realized who it was, I was like, 'Okay, well, who's MacKenzie Porter?' and I started digging in," Lynch says. "Luckily with social media, you can do that pretty well and see what she's been up to. That was a fun phone call telling her we were loving her version and asking her to be a part of this next chapter."

Says Porter: "I freaked out when I was told that Dustin picked me to feature. I'm a huge fan of him and also the song. When I submitted, I just knew that it was going to be huge and life-changing for whoever he chose."

It didn't take long before Lynch and Porter, a 31-year-old Canadian singer and actress who has appeared on the Netflix show Travelers, were in the recording studio together.

"We had a blast working together in the studio," Lynch says. "She has a voice that I don't think we've heard in country music yet, and that's nothing you can learn or teach yourself, it's just what you're born with. She has a tone that's really accessible and vulnerable, and it just fit."

He adds jokingly: "I realized very quickly that she makes me look bad." Lynch says that sentiment was especially true when they shot the song's new music video — which PEOPLE has an exclusive behind the scenes look at the making of — at a warehouse in Nashville.

"In front of the camera, MacKenzie is a pro," he says. "I was sitting there watching the monitor going, 'Oh man, I got my work cut out for me.' But we had a blast, and she's a great sport. I think my favorite part about that day was just getting to spend time with MacKenzie and watch her do her thing and shine."

The music video shoot was only the third time Lynch and Porter got to hang out in person, and while filming the car scene, they "finally got a chance to just chill and talk about dogs, traveling and songwriting," says Porter. "It was just so nice to get to know him on a human level," she adds.

From the start, Lynch knew that "Thinking 'Bout You," a track off of his latest album Tullahoma, was meant to be a duet.

"This song was born on the road, and I just started talking, like, 'Man, I would love to do a collaboration on this next album. Let's try to write a duet where I can find a female to sing it with me,'" he says. "We had the title, 'Thinking 'Bout You,' and then after we got the melody locked in, it was kind of a one-take by myself."

Though all of the songs on Tullahoma are very much personal to Lynch and his life, he says "Thinking 'Bout You" doesn't point to one person in particular.

"In an indirect way, it's about where people have kind of ended up [in my life], and how I've had some great memories along the way," he says. "So the lyrics came very easily. It's just one of those songs that when we wrote it, we felt it was special." Another special song off of Tullahoma is "Momma's House," which has been a massive hit on country radio.

"With this past year, having folks react to music is so special," Lynch says. "We don't have that every night gratification of playing shows so seeing people react to 'Momma's House' and 'Thinking 'Bout You' is foreshadowing what's to come later in 2021 for us, which is getting back to doing what we love and being on stage."

On June 3, Lynch is set to kick off his "Dustin Lynch Pool Situation," a three-day festival-type event in Las Vegas that will feature Lynch as a headlining act, a DJ set by Brandi Cyrus and special performances by artists Jordan Davis and HARDY.

"There could not be a better kick-off for us as a band," Lynch says. "Honestly, it's kind of bizarre that our last show in 2020 was in Las Vegas, and we get to kick off 2021 as a band together back in Las Vegas at the 'Pool Situation.'"

"I think all of us are wondering if we can still do it, but that's fun," he adds. "It's great to have those nerves again. It's kind of like I haven't had nerves in a decade because it's been constant touring for us. So it's fresh. These shows coming back in 2021 are going to be some of the most special we do because we miss it, and I think our fans miss it too. Everybody's just looking to celebrate and have a good time."

As the world continues to recover from the COVID-19 pandemic, Lynch says he's hoping to eventually bring his "Pool Situation" on tour. "I look forward to knocking out this first year in Vegas and seeing where the future takes us," he says.

Until then, though, Lynch has his hands full taking care of his farm outside of Nashville, which he purchased at the end of 2018.

"I'm a full-time farmer," Lynch says with a laugh. "I kid with my buddies that I farm for a living, but it's true. I love the process of going out and having a to-do list and checking those things off and watching the farm come to life. My farm, it's a growing operation and it's a learning experience for me because it's been a dream of mine to own land, have a farm and a tractor. I've got my John Deere."

"Having a place to go and do concrete work and accomplish something is important for me," he continues. "It feels like I have a purpose and a finish line whatever I'm out there working. There's no better reset button for me than being out there." In addition to farming, Lynch has been working on new music and plans to drop some more new songs this year.

"They're songs that this last year inspired — doing life with friends, getting to spend more time with family, enjoying the water, enjoying the great outdoors," he says. "So we've got a lot of new music coming this year, and if I keep my act together, possibly an album before the new year. I'm working hard at it and really excited for this next chapter of music that we have to follow Tullahoma."