White City House is the latest outpost of the Soho House, a series of members’ work spaces and social clubs founded in 1995, now with 23 locations around the world; many clubs also include a hotel component. This hotel has the particular distinction of being set inside Helios, the landmark midcentury BBC television headquarters. The doughnut-shaped building, constructed between 1948 and 1960, once hosted live broadcasts and productions of shows like “Dr. Who” and “Monty Python’s Flying Circus.” It was recently redeveloped to include the White City House and its 45 hotel rooms — available for booking by nonmembers of Soho House — as well as new apartments and a host of retail shops and restaurants. (Word has it that one former BBC producer bought a flat that was once his former office.) White City House occupies seven floors and commandeers a generous section of the building’s outside ring, with unusual views that lend its circular corridors a kind of neato science-fiction flair. Inside the period-savvy public spaces, you’ll find a very international crowd.

The hotel is in West London, convenient to both the White City and Wood Lane Tube stations, and less than an hour by Tube to Heathrow International Airport. The White City district includes the BBC headquarters — which still hosts several BBC studios and the offices for BBC Worldwide — a Westfield shopping center, new apartment buildings and a new campus for Imperial College London. Parking is a pain and there are construction cranes everywhere, but it’s an interesting view on a buzzy neighborhood undergoing change.

A decidedly “Mad Men”-esque vibe permeates the 45 rooms, which range in size from “tiny” (161 square feet) to “big” (377 square feet). Though we arrived at the hotel two hours before check-in time, our room was ready for us. We booked a nonrefundable “medium” room (tip: this knocks 20 percent off the going rate). The rooms are on the second and third floors, and the aerial, window-lined approach around the curving hallway to the hotel rooms is pleasing. The room itself was appointed with custom-made furniture, including a striking accordion-wood built-in closet. I spent time working at the vanity desk, the mirror lined with warm Edison-style bulbs, and it was the first time I’ve ever felt like a movie star while typing. Soundproofing, however, isn’t great — we could hear housekeepers vacuuming and doors slamming up and down the hall. 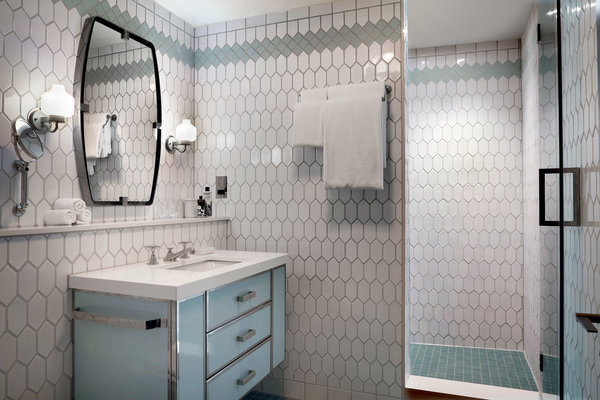 Done up in gorgeous honeycomb white tile, the spacious shower features a line of 10 different full-size Cowshed body washes and shampoos (“Grumpy Cow” shampoo, for instance, boasts soy protein and organic pomegranate to lift spirits along with hair volume). You can take any of them home for a fee. An array of sample-size bath products is free, as are toothbrushes, combs, ear plugs (you’ll want them; see above), and more.

Room service comes from the Allis, an all-day lounge and bar in the lobby that’s open to the public. I ordered an afternoon snack — charred broccoli, beet greens, harissa and hummus (£9), plus triple-cooked fries (£4) — that arrived in a brisk 15 minutes. The fries were hot and crisp, the vegetables fresh. Part of the pleasure was dialing reception from the mint-green 1960s-inspired room phone. The ninth-floor House Canteen, the club restaurant, is open to hotel guests and plus-ones, and on a space-available basis. The vibe on a Monday night at 5:30 p.m. was WeWork happy hour populated by an international cast of actors who are just a little too good-looking. (Remember that the Soho House’s founding ethos was as a members’ work space for creative and media types.) Before 6 p.m., everyone is staring into laptops and other personal devices. After 7 p.m., laptops are prohibited, so they order cocktails and stare at each other instead. The 10th-floor rooftop bar has a lovely pool outside.

Perhaps the hotel’s crowning perk is its 24,000-square-foot gym, in the basement of the Helios building. It has a juice bar and cafe, every exercise machine you could possibly desire, a 17-meter lap pool, and a cavernous hammam with a connected steam room and sauna. In-room, there is free Wi-Fi and free wash-and-fold laundry service (what a throwback!). Alas, the minibar is not free, but it does feature all manner of snacks and beverages and an impressive cocktail kit, including an old-fashioned vermouth bulb spritzer.

The hotel is all about the posh digs, the posh people to look at and the retro style that will appeal to midcentury design fans.