Home » Travel » I visited London's best bar, and even though I paid $25 for a drink, I'd go back in a heartbeat

What makes a good bar? Like, a really good bar?

If you asked me that question a couple of weeks ago, I would have said cheap drinks that don't taste like paint stripper and somewhere to sit. But at the best bar in London, I experienced the exact opposite — and I'm already thinking about when I can justify going back.

With cocktails hovering around the £20 ($25.91) mark per drink, the Connaught Bar is not a place the majority of us can frequent for Friday night bevvies. Prior to visiting, the types of people I expected to find propping up the Connaught's bar would have been stuffy old-money types braying about Brexit.

I'll admit, I went along with preconceptions already loaded and judged the place before trying it, but was happily proved completely wrong. Here's what it's like inside London's best bar.

I came straight from work on a Thursday night to one of the priciest pockets of London. 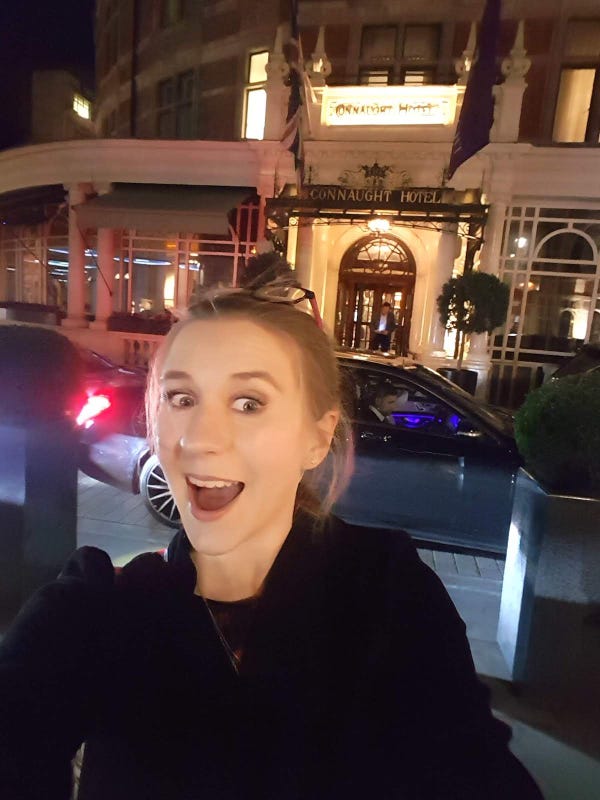 Scanning the drinks and food menus beforehand, I was immediately put off by how pretentious the whole set-up appeared to be. I'm an advocate for substance over style, and like most people I'm sick and tired of overpaying for something that's mediocre at best just because of hyped brand prestige. The fancier place does not always equate to the better experience in my book.

I took the tube to Bond Street and changed my scruffy flat shoes into heeled boots so I would feel like I fitted in a bit more. 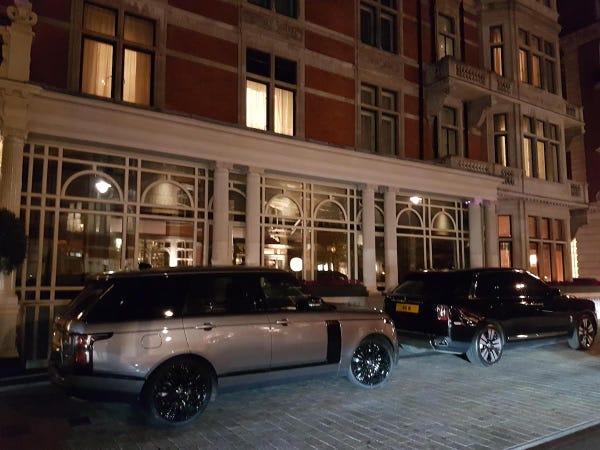 To gather up the courage to walk into the hotel on my own I did a lap of the block (Mount Street). Traipsing past Balenciaga and Christian Louboutin on one side of the payment and rows of expensive cars on the other did not calm my nerves about being immediately laughed out of the bar.

The entrance was classic and understated, in that quiet "old-money whispers" kind of way. 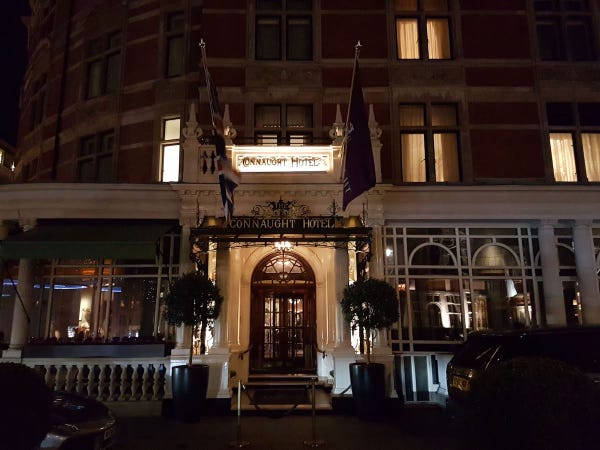 There were a couple of beige-uniformed doormen hailing cabs and the opening doors of spotless Range Rovers for guests.

Summoning my limited acting skills, I tried to give off an air of power and confidence walking past the doormen to the revolving entrance. 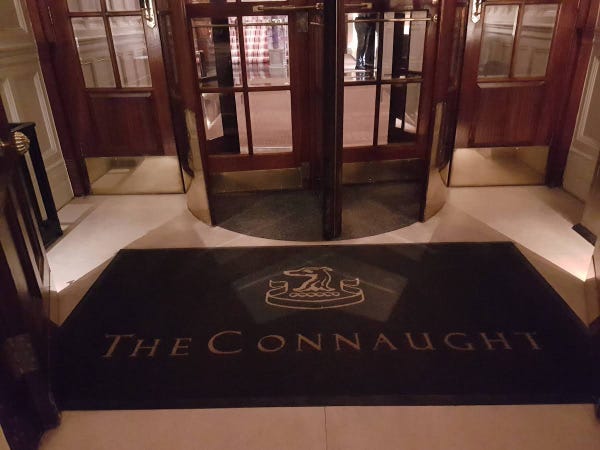 They completely ignored me while continuing to assist the small cluster of people maneuvering Louis Vuitton luggage.

In the foyer, my faux-confidence evaporated pretty quickly as I had no idea where in the hotel the bar was. A porter caught my rabbit-in-the-headlights expression and offered help — though I quickly found out there was more than one bar.

"We have the Coburg Bar, which is a relaxing spot for a quiet drink, or there's the Connaught Bar which is a cocktail and martini bar," he said. I thought it had to be the latter, so grateful for his help and cursing myself for not doing more research, I was directed behind a huge sweep of a staircase.

My next perceived challenge came in the form of an immaculate blonde hostess standing guard at the bar's wooden double doors. 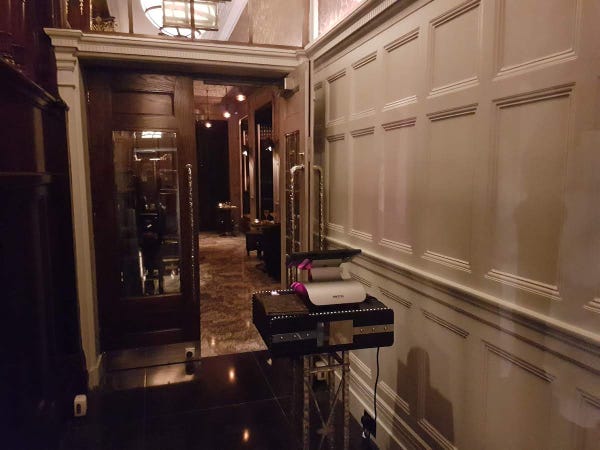 She beamed at me, and I tried to match her smile.

I was told there were no available seats, but that I could stand at the bar until one became free.

She escorted me through the dimly lit room to the glowing bar at the far end. 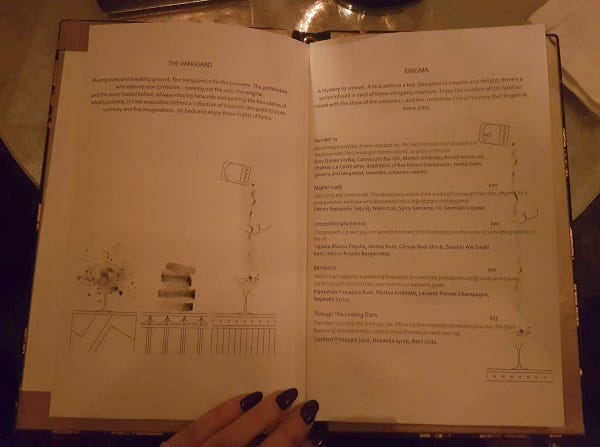 "May I take any belongings you don't need?" the hostess asked. She whisked away my coat and second bag and slipped a menu into my hands.

As soon as I started flicking through the pages, another neatly dressed hostess materialized next to me.

She placed down a tiny glass of amber liquid, plump green olives, a stack of salty crackers, and a folded linen serviette. "This is a little welcome drink," she said.

A suited bartender serving a couple of ladies next to me asked what I would like to drink while he strained something into two tumblers for them. 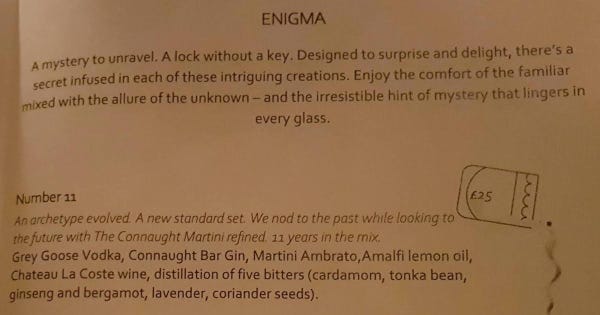 He then proceeded to question what I usually like to drink (anything dry) and how I was feeling that day (pretty good, thanks). "I recommend a Number 11 martini," he said.

My cynical mind figured he was offering the drink because it cost £25 ($32.40) a pop. However, I nodded and crossed my fingers that I'd actually like it.

The Number 11 martini is new since August last year, said Giorgio Bargiani, Head Mixologist at the Connaught Bar who turned out to be the one taking my order. 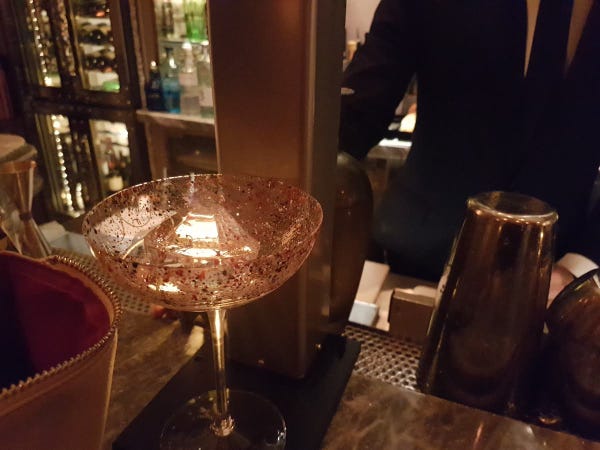 The drink itself was inspired by painter Jackson Pollock and his numbered pieces. Bargiani produced a color-splattered coupe glass and placed a huge chunk of ice chiseled into a diamond at the center of it.

I didn't see how the rest of the drink was made as the original hostess came over again and dropped off my cloakroom number. 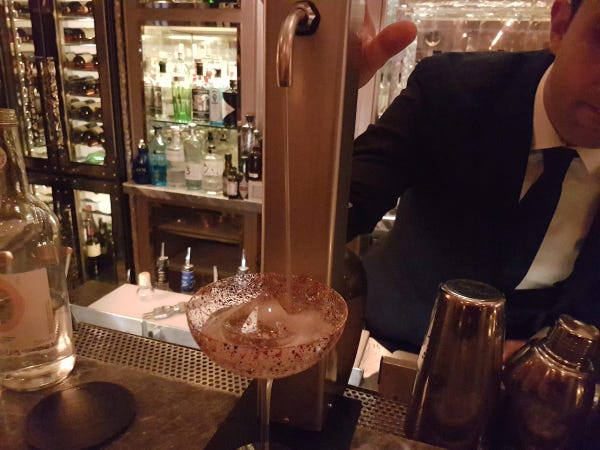 When I turned back around, Bargiani was pouring my drink into the glass via a portable tap stored underneath the bar.

The spectacle and pageantry of a simple drink was captivating, and definitely made me feel like I was somewhere special. 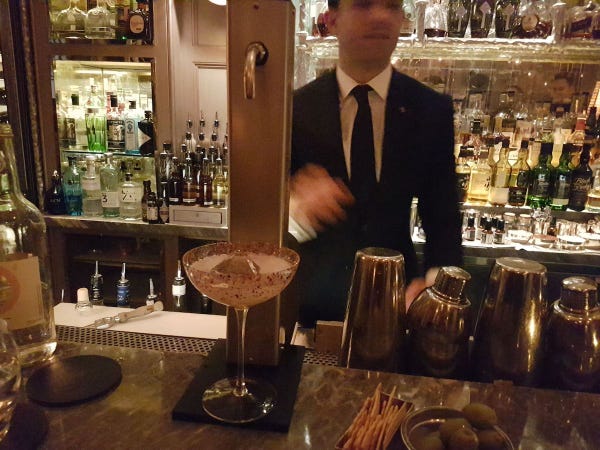 An American man joined the standing patrons at the bar, and once the hostess had taken away his outside clutter, Bargiani greeted him and took his martini order.

Back to my unbelievably extra drink with an ice diamond the size of a tennis ball, I silently toasted to tasting my first ever martini. I loved it, but started tucking into the free snacks in front of me to try and stem the potency on an empty stomach.

To sip on something that was basically the equivalent cost of two hours' work on minimum wage in London felt disgustingly decadent. 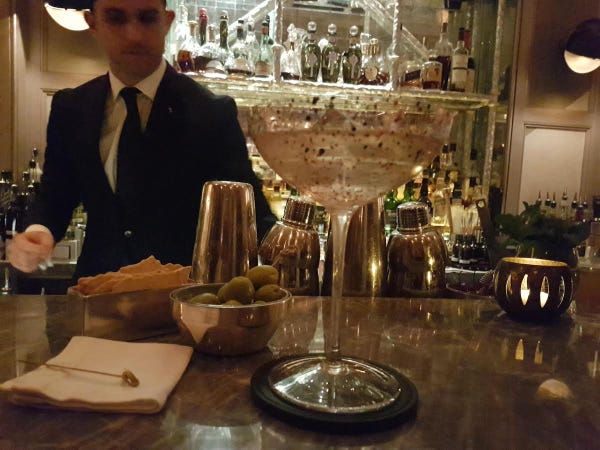 Bargiani finished performing what I can only describe as a martini ceremony from a dedicated trolley for his American customer and then chit-chatted to me.

The American on my right said he had been at New York's Dante, voted the best bar in the world, the previous week, and that it was packed, shoulder-to-shoulder.

"This is the best bar in the world," he decided. "I always come here when I'm in London."

As the American martini drinker raved about how amazing the Connaught Bar was, another hostess came over and informed me a table was ready. 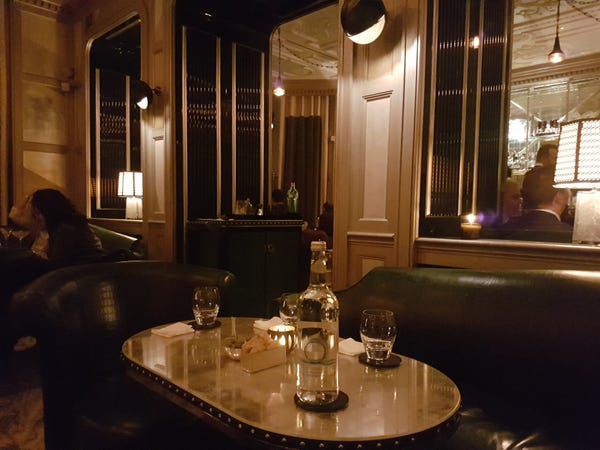 She told me to leave my drinks and snacks at the bar (an icy glass of cucumber water had been unexpectedly added to my little area) and led me over to the middle of the room. My stuff followed two seconds later and my nibbles were refreshed.

The lights had dimmed down even further to candlight level and the strong dark interiors added to the relaxed vibe of the evening. Mellow electronic beats and easy-listening jazz were piped out over the murmurs of conversation.

The bar isn't particularly big, but has high ceilings which create a sense of grand space. 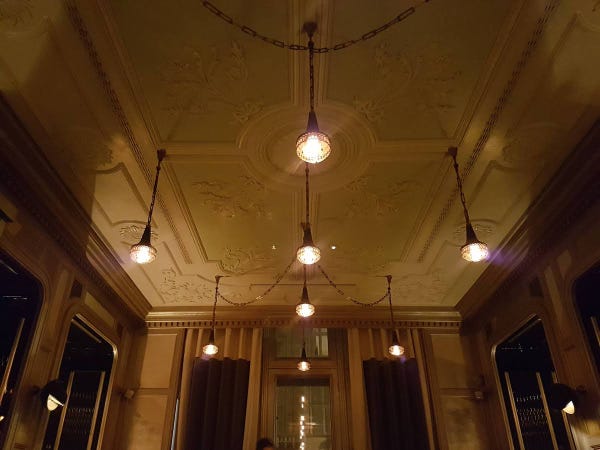 I couldn't pinpoint an overall design style. The decor felt fresh and modern but was giving heavy nods towards its history (the Connaught Hotel's first beginnings started in 1815).

From my middle seat I was able to get a better view of the Thursday night drinking crowd. 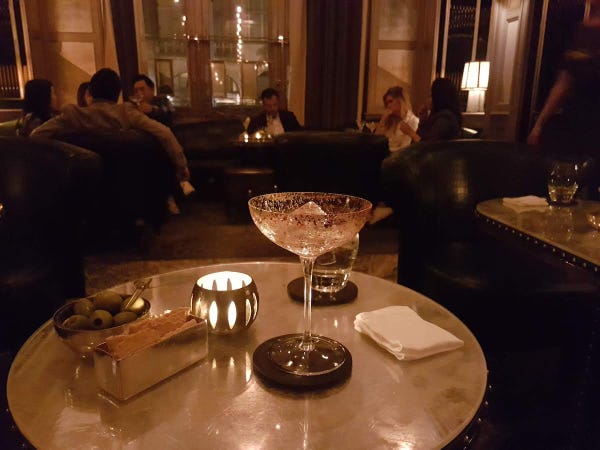 The clientele couldn't be further from the fusty tweed-clad Old Boys Club I was expecting. The Connaught Bar's patrons looked young and diverse. There were streams of conversations in French, Russian, German, and English. Nobody was particularly dressed up, either — one couple even shuffled in sporting hoodies and trainers (I noticed they were both wearing six-figure watches, though).

My biggest takeaway was how knowledgeable and sharp the staff were. 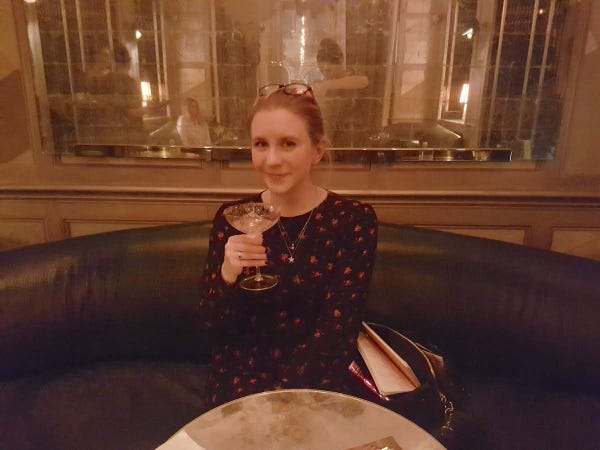 Nothing was too much trouble. When I was coming to the end of my first drink, a hostess came over with another menu for me to browse. I again for another drink recommendation as I was unsure what to pick following a martini, and I wanted to be able to walk home in a straight line that night.

The hostess also obliged my self-conscious request for a photo.

Going through the menu again, I chose a Gate No.1. 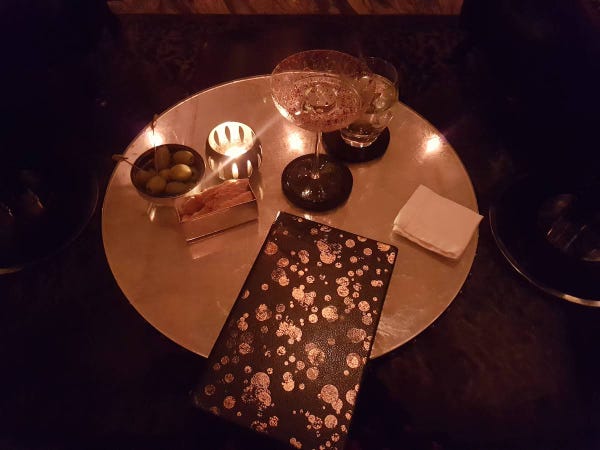 It is also garnished with a dark chocolate "gate." 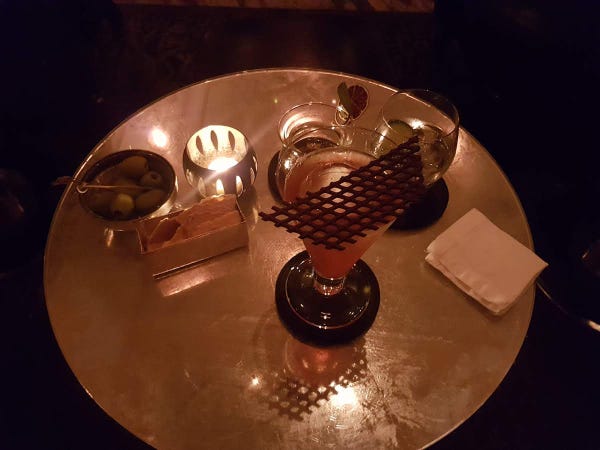 Bargiani said the busiest days at the Connaught Bar are Thursdays and Fridays. 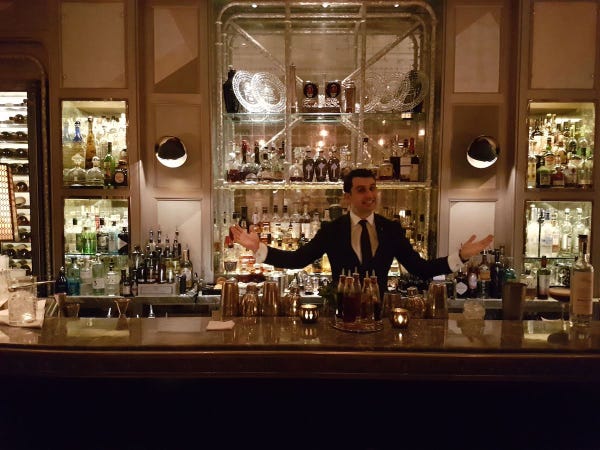 When I first arrived around 6.30 p.m., the bar was busy, with every table occupied and a small gaggle of us waiting to be seated.

By the time I was getting ready to go, just after 9 p.m., the numbers started to dwindle. 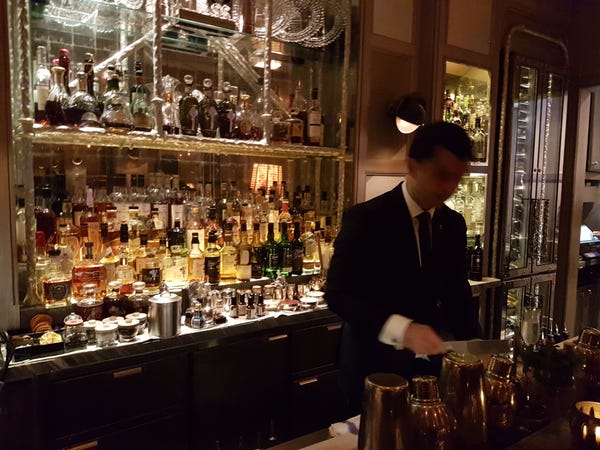 But this didn't impact the buzz within the bar and people were still filtering in for an after dinner tipple.

It's clear you're not just paying for ingredients and a "heritage name" at the Connaught Bar. 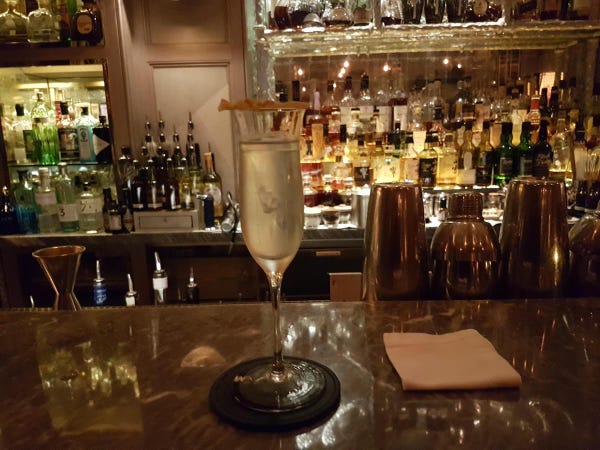 You're forking out for the "everybody is welcome" ambience, the flawless service, the genuine warmth from those who work there, the free pre-drink drink, bar snacks, and of course that W1 postcode.

However, I think it's safe to say my next visit will be reserved for a very special occasion.