Home » Travel » Is it possible to tell the difference between a cheap and pricey wine?

Is it possible to tell the difference between a cheap and expensive wine? MailOnline finds out in a BLIND TASTE TEST (and the results will surprise you)

The chance to try tasty local wines is one of the highlights of travelling to a thoroughbred wine-making country.

And the holiday spirit often makes tourists less prone to worrying about splashing out on a pricey bottle – but are they wasting their money if they do? Does paying a bit more really mean better-tasting wine?

MailOnline Travel decided to find out by conducting a Cheap vs Expensive blind tasting of wines from countries popular with tourist connoisseurs to see if it’s actually possible to tell the difference between budget and costly wines without the influence of the price tag.

The master of ceremonies – the wine buyer for Vagabond Wines in London, Colin Thorne. The venue – Vagabond’s Battersea bar. The panel – me, MailOnline’s Travel Editor and three other (very willing) helpers. Scroll down to discover the intriguing results. 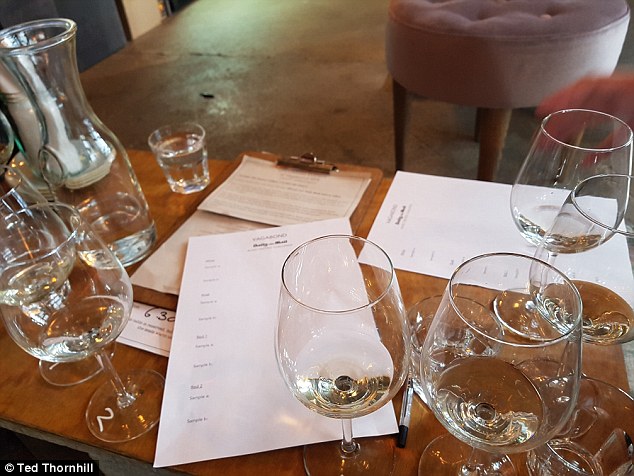 We tried four pairs of wine, all available at Vagabond – two red and one rose. But first up was a pair of whites.

We had a glass each – with no food – with each vessel simply labelled ‘No1’ and ‘No2’. Only Colin knew which was which.

Our mission was to determine which one was cheap and expensive and to indicate which one we preferred.

To make the test realistic, the cheap wines were anything up to £10 and the expensive between £20 and £30 for each round.

The white wine test resulted in a 50/50 split jury for preference.

In my notes I described glass number one as a ‘good party wine’, while tester Kelly Grindle, from the Virgin Atlantic press office, said ‘one sip down it feels I could neck a bottle’ and Anna Catchpole, also from the Virgin Atlantic press team and another volunteer for this challenge, said it was ‘clean and crisp’. Our fourth panellist, James Murphy, said it was a ‘stayed-out-too-late’ kind of wine.

Next – glass number two. I reckoned it was more refined, James ‘well behaved and subtler’, Kelly ‘easier to drink than the first’ and Anna ‘not as refreshing’.

Preference: Two of us preferred glass No1, two glass No2.

Cheap vs Expensive: Three of us thought glass No2 was the most expensive. Kelly was sure it was glass No1.

The answer: Glass No1 was in fact pricier so three out of four of us were wrong. It was a £22.95 Bodegas Biniagual Memories Blanco 2017 from Majorca. Glass No2 was actually an £8.95 Bayanegra Airen 2017 from La Roda, Spain. 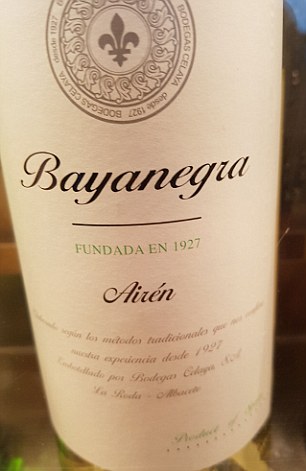 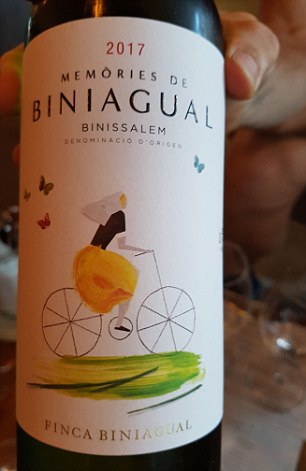 The Bayanegra (left) fooled most of the MailOnline panel into thinking that it was an expensive wine. The Majorcan wine on the right costs £22.95 – and 50 per cent of the panel preferred it 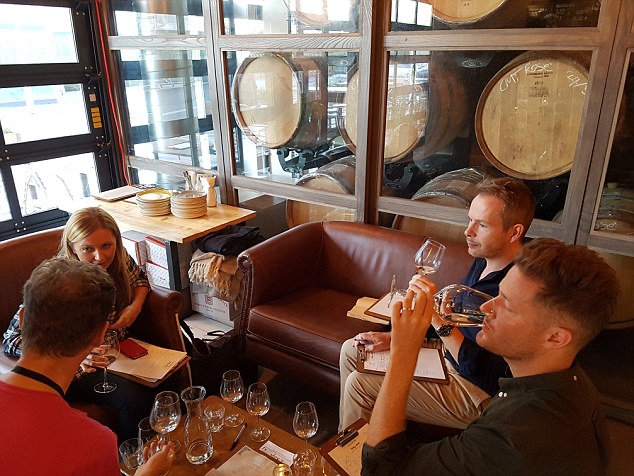 The MailOnline Travel panel – Anna Catchpole (left), James Murphy (second from right), Kelly Grindle (far right, mid-sip) and with his back to the camera, Vagabond wine expert Colin Thorne, who set up the test and guided us through the experience

Glass No1 deeply impressed Anna. She said it was ‘probably one of the nicest roses I’ve ever had – light and refreshing’. Kelly said it had ‘loads of flavour’, I said it had ‘a good structure’ and James said it was ‘pleasingly robust’.

Glass No2 was more intriguing.

I said that it smelt ordinary, but that it had hidden talents, because once you swirled it around in the mouth loveliness arose. Kelly said the taste was ‘delightful’, Anna said it ‘was not easy to drink, more complex’ and James said it was ‘spring when you smelt it, but autumn when you drunk it’.

Preference: All four of us preferred glass No1.

Cheap vs Expensive: However, three of us thought that actually glass No2 was more expensive. 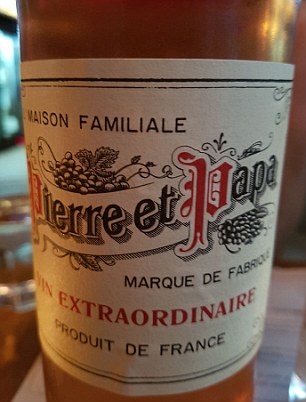 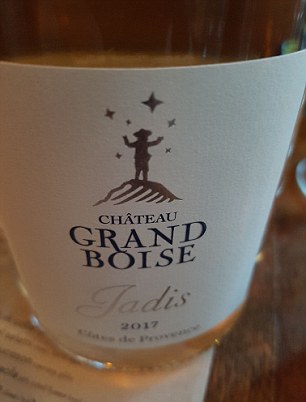 In terms of preference, the ‘cheap’ rose on the left was the all-out winner. The Chateau Grand Boise on the right, however, was correctly perceived to be expensive by three out of four of the panel

Anna declared that she’s not really a red wine drinker but said that she ‘quite liked’ glass No1. I said it had a ‘smooth finish’. Kelly said it ‘smelt like burnt berries and is an easy drinkable red’ and James said it was best drunk with ‘November bonfires’.

Glass No2 made a big impression on Kelly. He said: ‘This wine punched me in the mouth – pretty strong, heavy, flavourful.’ I said it was ‘rustic in a great way’, Anna said it was ‘heavy’ and that ‘one sip was enough’ and James said it was ‘a smidgen spirit-y, several shades from port’.

Cheap vs Expensive: But interestingly three said No2 was pricier. 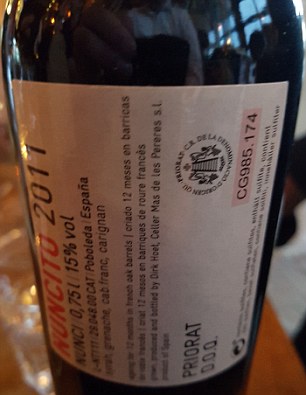 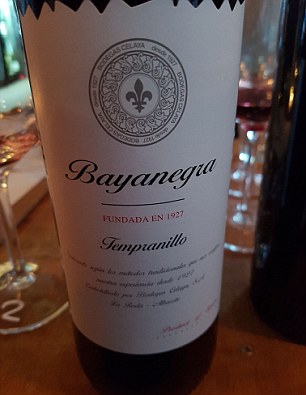 The bottle on the left is the ‘expensive’ red – a £24.95 Nuncito from Priorat, Spain. However, only one of the panel preferred it to the ‘cheap’ bottle, pictured right – an £8.95 Tempranillo from La Roda 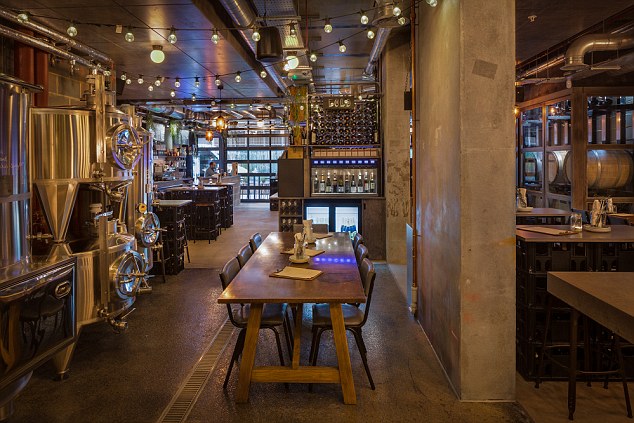 The venue was Vagabond Wines in Battersea, London. It makes its own wine and sells top produce by the glass and bottle

Glass No1 was universally declared to be heavy and oaky with a lot of flavour. ‘Blankets in December,’ said James, keeping his seasonal analogies going.

Cheap vs Expensive: And three said No1 was more expensive. 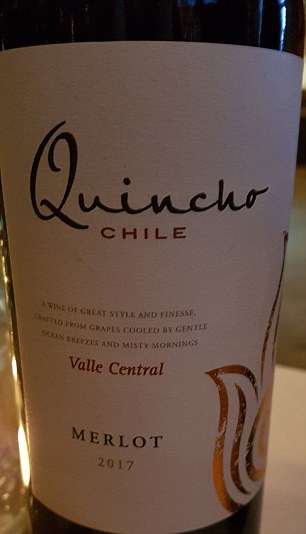 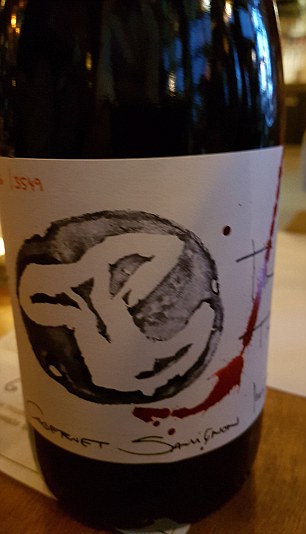 The £8.95 Quincho (left), lost out to the £22.95 Tinta Tinto (right). The expensive wine in this round was preferred by three out of four of the panel

White round. Confusion. Preference was split 50/50 and three out of four thought the cheap wine was actually the expensive one.

Rose. Three out of four correctly worked out which one was the expensive wine – but all four of us preferred the cheaper version.

Red wine round 1. Three of us preferred the cheaper red wine but three out of four correctly worked out which one was pricier.

Red wine round 2. A through and through winner for the expensive wine as three out of four preferred it and correctly declared it to be the pricier tipple.

The expert opinion on the results 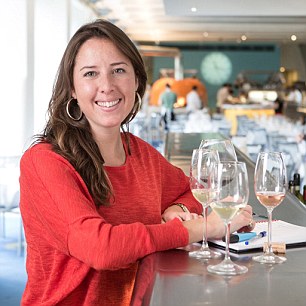 For some insight into the results, we turned to wine expert Emily O’Hare (pictured)

In conclusion it seems then that generally, it is possible for amateur wine enthusiasts to tell a cheap from an expensive wine.

But on the whole, we generally preferred the cheaper stuff.

So does that mean that makers of expensive wines are ripping us off?

For some insight into the results, we turned to wine expert Emily O’Hare, who contributes to Decanter magazine and used to be the sommelier at Michelin-starred restaurant The River Café, in London.

First of all, she mused, the fact that we didn’t eat with the wines would have had an influence on what we thought of them.

She said: ‘Some wines refuse to perform without a meal. I would imagine the Provencal rose [the expensive one] felt drier than the Pays d’Herault [the cheaper rose that won the round]? On its own it may have seemed rather ungenerous and tight-lipped, but given a mouthful of toast and tapenade – I would bet that wine would have turned it on, and revealed a side to you that was way more fruity.’

She said: ‘Even though a good wine is a good wine regardless of what it is compared next to, some older wines suffer if tasted next to a younger wine.

‘Sometimes they knock the younger wine out of the park immediately. But generally older wines, like people, mellow with age, and will not exert themselves to grab your attention the way a younger wine will, with its vibrant colour and powerful primary aromas and flavours.

‘Not all wines age well, (don’t go near those 1990 gran reserva Riojas under supermarket special offers for £8, they’ll be well over the hill), but the ones that can, what they are offering you is a different conversation, a bit quieter but usually more interesting.

‘A glass may be enough of the Tempranillo but the Priorat, in maybe a less challenging environment, that wine could be the one you would be glad to have a bottle of.’

Emily remarked that comparing the two Chilean Cabernet Sauvignons ‘must have been fun’, like walking into two chain stores but with one selling cheaper wares than the other.

‘You know the difference,’ she said. ‘Your senses tell you, the smell, the texture, the pleasure they are to walk in/drink.’

And finally, Emily was delighted with the white wine round result, where three out of four of us thought the £8.95 Airen Blanco from La Roda region was actually the expensive wine.

She said: ‘Airen is the most planted white wine grape variety in the world. The wine it produces is usually turned into brandy or sherry. So it is nice to see a producer trying to coax a bit more from this grape. And evidently I must admit to being very intrigued by glass No1 from Majorca, I would have loved to have tried it.’

WHEN AND WHEN NOT TO SPLASH: THREE GENERAL RULES

Here Emily offers sage advice on when to fork out for something and when it’s best to save the pennies.

DON’T SPLASH If you are in a large group. If you are with many people – don’t splurge… there is nothing worse than having a tiny sip of a great wine. A great bottle is no fun for just one. Or eight. SPLASH! For two/three it is perfect, for four is okay. I’d split a really good bottle between four maximum. You need a good glug of a wine to get to know it.

DON’T SPLASH If you are eating lots of different dishes with lots of different smells and flavours. It is hard to focus on all the different qualities of a great wine. If you are choosing a wine to match a complicated meal I would err on the side of simplicity, save on the wine front and ask for a recommendation for a wine on the reasonable side – or choose a wine at the cheaper end of the list. even the house wine. All good restaurants and bars work really hard to find a great house wine. A great house wine usually reflects a great wine list. SPLASH! However, if you are going for a simple meal, then you can really turn it into something super memorable by choosing a really smart wine.

DON’T SPLASH If you’ve noticed that the restaurant/bar is serving great wines in crappy glasses. Tumblers are good for knocking back wine, so if you are in the mood for sinking a bottle without thinking too much then they are perfect. But if you are spending up, you deserve a decent glass with which to appreciate a lovingly made wine. A glass with which you can appreciate a wine’s colour, smell and flavour. You wouldn’t want to eat an expensive meal off a paper plate.

And a not-so-secret secret…

If you want a bad wine to taste better chew a lemon, or have a lick of salt – prepare your tequila kit! Acidity and saltiness are friends to wine (bitterness and sweetness are enemies) so if you have ended up with a neutral, thin wine and you want it to feel bit fruitier and fuller-bodied, chew on a lemon before taking a sip. Or crunch a few granules of salt. Not great for the teeth enamel, and you’ll need to have plenty of water to rehydrate before bed… but both tricks work!