Home » Travel » Is Travel Next in the Fight Over Who Profits from Native American Culture? 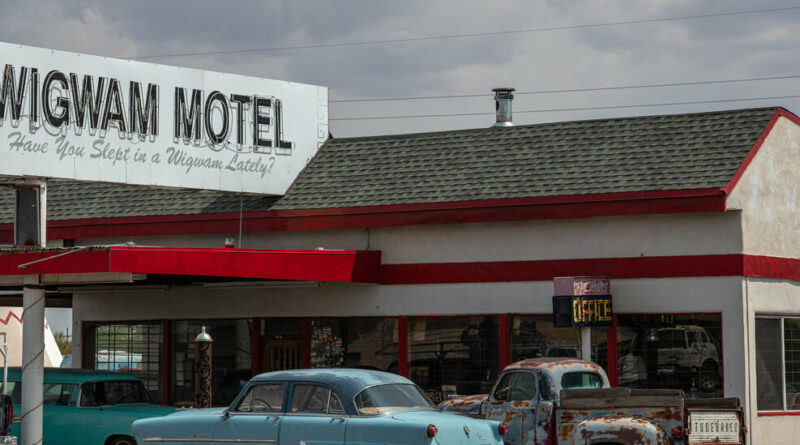 John Gunderman believed his vision for a campground with 70 tepees, 12 hogans and 43 Conestoga wagons in the Arizona desert off Route 66 would “invoke nostalgia that transcends to every generation.”

“We find the use of Indigenous/Native American culture for commercial profit to be extremely disturbing and dehumanizing toward us and our sovereign tribal relatives,” Sharon Doctor, the chairwoman of Coconino County’s Indigenous Peoples Advisory Council, wrote to the county board of supervisors about the proposed “Historic 2 Guns Luxury Glamping Resort.”

Mr. Gunderman was asking for a zoning change to develop about 250 acres outside Flagstaff, and for months refused to budge on the Native American themes used in his design. Just before the vote in May, he said that given the “cultural affront” they caused, he would remove “all elements that either celebrate or borrow from the cultures of Native America.”

About 40 percent of the land in the county is occupied by six tribal nations: Navajo, Hopi, Havasupai, Hualapai, Kaibab-Paiute and San Juan Southern Paiute.

That left the project with Conestoga wagons, yurts, tents, tree houses and cabins for glamping, plus R.V. sites, a hotel, water park, drive-in theater, miniature golf, laser shooting gallery, U.S. military museum and restaurants. Mr. Gunderman estimated the project would bring more than 175 jobs and $350 million in annual revenue to the county, which has a poverty rate of nearly 20 percent.

The opponents feared the development would cut off access to Indigenous medicinal plants and desecrate the grounds where some believe Apaches were murdered by Navajo in 1878. Additionally, “for many Native Americans there is nothing good or nostalgic about covered wagons,” Amy Cegielski, a county resident and member of the Navajo tribe, told the board of supervisors.

The board unanimously voted against the project, citing concerns about cultural sensitivities, as well as planning for fire, police and traffic.

Two Guns was far from the first development to try and wrap itself in American Indian trappings to give it a sense of authenticity. What remains to be seen is whether its failure, and a growing movement to change names of tourist destinations and landmarks that can be deemed offensive, herald an increasing movement toward Native American justice amid an ongoing national conversation about race.

While many discussions about Native American stereotypes have revolved around sports teams (including the former Cleveland Indians and the current Washington Football Team), the 2 Guns project focused on a vacation retreat that could have accommodated well over 1,000 guests, and it serves as a reminder that Indigenous people have been alternately esteemed, exploited and ignored by the recreation industry for more than a century.

A sense of authenticity

The Fred Harvey Co., which built restaurants and hotels along railroads in the West, had an Indian Department as far back as the early 20th Century. Its aim was to entice sightseers through the promotion of Native American groups, which it did in part by depicting images of Indians on brochures, postcards and even playing cards. Some of the company’s hotels, including the El Tovar Hotel at the Grand Canyon, showcased Native artists who would weave blankets or craft pottery and jewelry on site.

“There’s an authenticity dimension to it. You know you’re in the West, you know you’re somewhere else because you’re seeing Indians,” said Philip J. Deloria, a professor of history at Harvard University and author of the nonfiction book, “Playing Indian.”

“The moments when Americans start getting out on the road and start becoming travelers and tourists is completely wrapped up in this. It’s wrapped up in going into new places and pretending you are native to those places,” said Dr. Deloria, who is descended from the Yankton Sioux Tribe of South Dakota. Although tepees were the traditional dwelling of Plains tribes, they cropped up throughout the West because that’s how people from the East imagined Indians living, he said. Southwestern tribes lived in pueblos and hogans.

Indeed, some travel venues have gained a legendary place in American nostalgia, despite perpetuating incorrect stereotypes. There were seven Wigwam Village Motels built between 1933 and 1950, and all three that survive are on the National Register of Historic Places. The one in Arizona has twice received grants from the National Park Service Route 66 Corridor Preservation Program.

According to the National Park Service, the architect Frank Redford, who had patented his design for a tepee-shaped building, disliked that word so he called them wigwams instead. Wigwams are domed, cone-shaped or rectangular structures used by the Algonquian and some other Indigenous people in the eastern half of North America.

In 1938, Chester Lewis was so taken with a Wigwam village he saw in Kentucky, he purchased the plans and rights to use the name. One of the Wigwam motels remains in the Lewis family. That one, off Route 66 in Holbrook, Ariz., was the sixth village built, and periodically gets a nod in movies and television. The “village” features 15 28-foot-tall white concrete-and-steel, tepee-shaped units decorated with a red zigzag and arranged in a semicircle. Calls to a motel spokeswoman were not returned.

Samir Patel, whose family owns the final village built, in San Bernardino, Calif., said they haven’t received complaints about cultural misappropriation. “We just try to manage the place and preserve it as a piece of history,” he said. The third remaining Wigwam Motel is in Cave City, Ky., and was one of two in that state. (Others were built in Alabama, Florida and Louisiana.)

History alone isn’t enough to hold onto something when it’s hurtful, at least not at Squaw Valley, in California, home of the 1960 Winter Olympics, which announced last summer that it will have a new name this year.

“We have to accept that as much as we cherish the memories we associate with our resort name, that love does not justify continuing to use a term that is widely accepted to be a racist and sexist slur,” Ron Cohen, president and chief operating officer of Squaw Valley Alpine Meadows, said in a statement. A new name has not yet been announced. The ski resort near Lake Tahoe is on land that was once home to the Washoe Tribe.

Crystal Echo Hawk, the founder and executive director of IllumiNative, an advocacy group, said in an email that tribal members and their advocates have pushed for changes like this for decades. “Removing language that stereotypes and harms Native people have long been a focus for Native activists,” she wrote.

But change was often slow and seldom. The Wooden Indian Bar at the Americana Hotel in New York City closed in 1972 after a protest. In 1995, Minnesota passed a law eliminating the word squaw from 19 geographic names in the state. In 1998, the city of Davis, Calif., voted to rename a square named for Gen. John Sutter, who ushered in the Gold Rush and in 1841 built a European settlement in what would become Sacramento, partly by using enslaved Me-Wuk and Maidu Indians.

The pace of change picks up

In recent years, voices that were long dismissed are being heard and the pace of change seems to be accelerating.

In 2017, Airbnb apologized for an ad featuring a “true Sioux” experience in a tepee in Joshua Tree, Calif., which was never home to any Sioux tribes. The Pointe Hilton Squaw Peak Resort, which opened in 1977, last year changed its name to the Hilton Phoenix Resort at the Peak. The General Sutter Inn in Lititz, Penn., last year rebranded itself as the Lititz Springs Inn & Spa. Both Colorado and California last year announced efforts to review and change names that are offensive or honor controversial figures.

“These disparaging and dehumanizing names serve as a constant reminder that we were never intended to be part of the California dream,” Christina Snider, the tribal adviser to Gov. Gavin Newsom, said when a review of names in state parks and transportation systems was announced.

In Colorado, Gov. Jared Polis formed an advisory board that is considering asking the federal government for more than a dozen name changes. Among those under consideration are a mountain named for Kit Carson, who among other things led the forced 300-mile Long Walk of the Navajo in 1864 during which hundreds died, and another mountain honoring the territorial governor John Evans, who that same year authorized citizens “to go in pursuit of all hostile Indians on the plains.”

Evans was forced to resign after troops massacred about 230 peaceful Cheyenne and Arapaho people camping under an American flag and a white flag on a reservation in Sand Creek.

“There is a major shift in attitudes in the U.S. around racist names and figures,” Ms. Echo Hawk wrote. “Consumers want businesses to reflect their own personal values and abandon these harmful business names or images that dehumanize Native peoples.”

Still, tourists may not always see that they are participating in something that can be hurtful to some.

The JW Marriott Tucson Starr Pass Resort & Spa advertises a sunrise “Mitakuye Oyasin” ritual, which is “curated and conducted by a member of the Navajo Nation community,” according to Marriott spokeswoman Terri Worthington.

“The warming sunrise, the Native American Flute, burning your own sage prayer tie, and an eagle feather blessing will inspire you to see life from a different perspective,” the resort writes in the text accompanying a video of the ceremony.

“This respectful ceremony has been a cherished offering since the hotel opened in 2004,” Ms. Worthington said.

But Francis Whitebird, 78, a member of the Rosebud Sioux Tribe from South Dakota who learned Lakota as his first language, said in a telephone interview that the Lakota phrase “Mitakuye Oyasin” applies to an event or series of events that can sometimes last for months, and is not a single ceremony designed for those outside the tribe. The term itself, he said, can’t be explained to someone who doesn’t speak the Lakota language, which is “esoteric, conceptual and holophrastic,” meaning that a phrase or an entire sentence is expressed by a single word.

“It’s being applied to ceremony when it doesn’t have anything to do with ceremony,” he said, noting that a whole cottage industry exists around Lakota spirituality. Mr. Whitebird, who received a Purple Heart for his service as a platoon medic in the Vietnam War, and has a master’s degree from the Harvard Graduate School of Education, served as chairman of the National Advisory Council on Indian Education for President George H.W. Bush.

“You have to know what you’re taking about,” he said. “You can’t take one word and interpret it from a white point of view. It is desecration, it’s misuse, it’s misinterpreted.”

Searching for a new home

Mr. Gunderman is trying to find a new home for his 2 Guns resort. While he plans on keeping the Conestoga wagon motif, he won’t use tepees.

In a telephone interview, he said that he’d tried to solicit input from 10 tribes before taking his project to Coconino County, but only three responded. A resident of Indiana who moved to Arizona a few months before the vote, he said he “wanted to become a part of the community, become family.”

He said that he understood that Native Americans had been treated badly by the U.S. government, but that “they were pointing to my skin color and saying I was at fault. Well I had nothing to do with any of that,” he said.

“Never in my heart of hearts did I ever go out there with any intentions of being disrespectful,” he said.