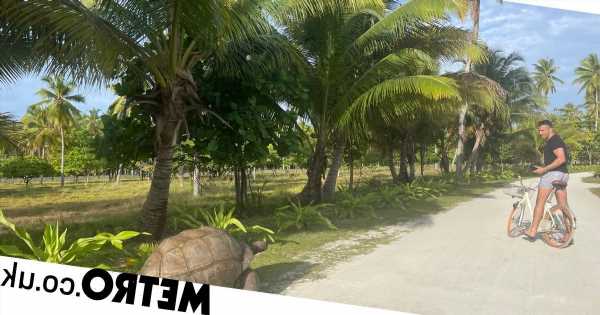 Cycling along a sandy road with signs warning me about coconuts falling from above, suddenly the wildest things stopped me in my tracks.

At first glance, I could hardly see the beast as it blended in with the foliage, but on closer inspection, I realised it was the largest tortoise I had ever set eyes on.

It looked almost dinosaur-like with its large reptilian limbs lumbering through the grass, and its body was almost the same size as my bike.

My partner and I stopped to survey this majestic creature, who we later learned was called George and aged somewhere in the region of 120. This was yet another discovery in the Seychelles that took me by surprise.

Before venturing to the remote archipelago in the west Indian Ocean I’d assumed it was mainly a honeymooner’s paradise, but there’s some real adventure to be had if you look beyond the pristine white beaches and heavenly accommodation options.

The island republic, comprising around 115 islands, offers a unique mix of varying terrain with the inner islands formed out of prehistoric-looking lumps of eroded granite rock, while the outer islands have more of a Robinson Crusoe feel, with sandy flats fashioned out of beds of crushed coral. 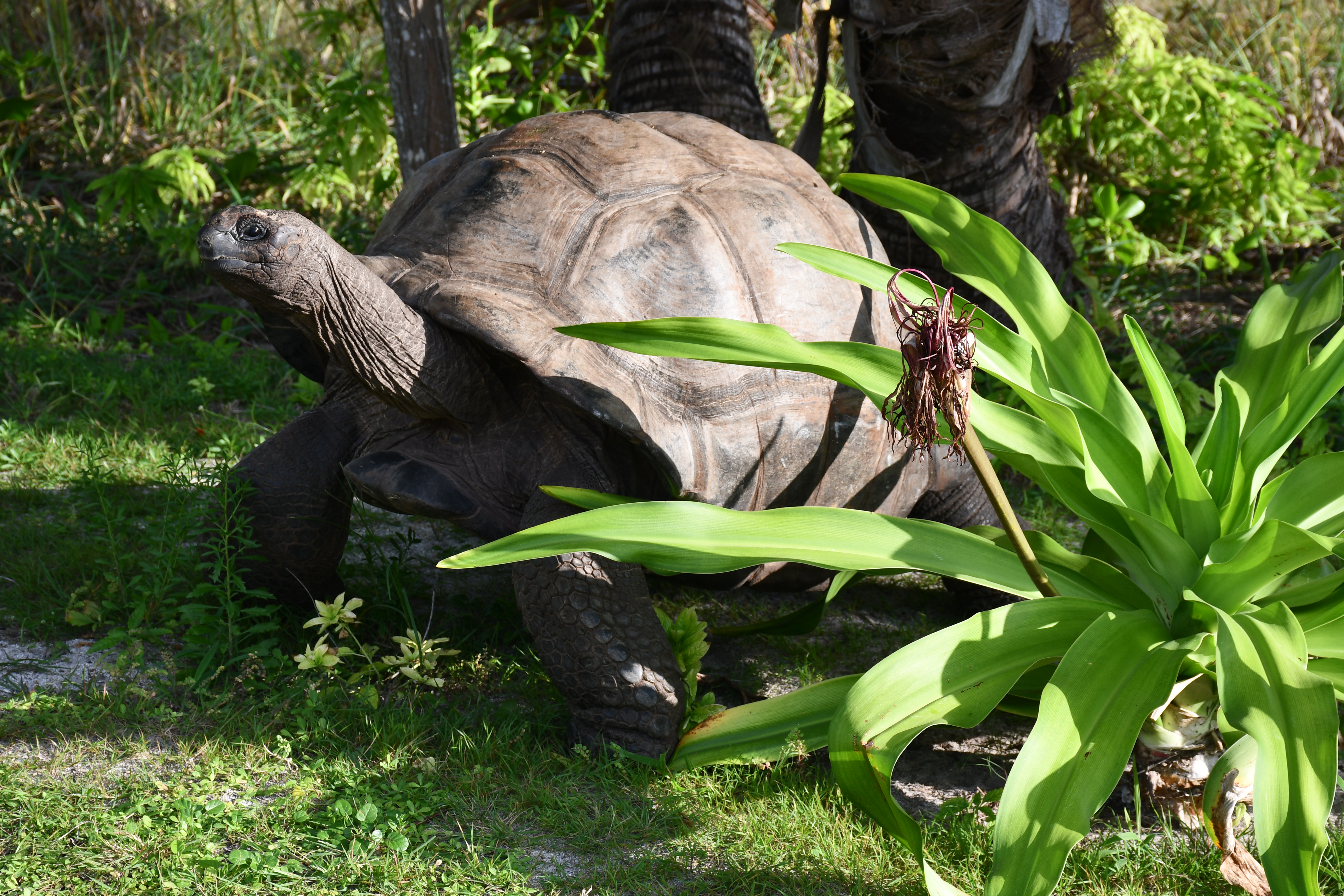 I kicked off my Seychelles adventure in style by venturing to Desroches Island, which is home to a super-luxe and eco-focused Four Seasons resort.

The 5km-long outcrop is accessible by a small 20-seater plane and it takes just under an hour from the main island of Mahe.

On landing on Desroches you’re quickly transported to an island paradise, with Instagrammable beachfront bungalows nestled amid lush jungle, more than 150 wild Aldabra tortoises meandering around and azure waters lapping the golden shores.

All of the guests get their own bicycles, which allow you to explore a clutch of beaches, a small Creole village and a nature sanctuary where you’ll find yet more tortoises ambling around.

On the beaches, you’ll find watersports equipment that you can use at your leisure, with kayaks, SUPs, and bodyboards among the picks.

Be sure to grab a snorkel from the watersports centre, as the shores around Desroches are fringed by healthy seagrass fields which harbour dozens of sea turtles. You’re pretty much guaranteed to spot one as you go.

Continuing on the wildlife theme, keen birders will be in paradise on the island with dozens of resident species flitting from palm to palm.

Highlights include the tropical shearwater, which digs big burrows the size of rabbit holes to nest in, and the super speedy red fody which you’ll spy all over the Seychelles.

After adventure-filled days, the Four Seasons at Desroches Island has more than four restaurants for you to refuel at, with everything from authentic creole to Indian food to beach BBQs on offer.

During the day, private picnics can also be arranged for a desert island experience minus the foraging.

One of the most unique dining venues is located within a lighthouse, which serves up stunning panoramic views of the surroundings and some mouthwatering steak if you’re hankering after something other than seafood and locally grown produce.

If you’re celebrating a special occasion, you can choose to dine right at the top of the tower.

After having our fill of island life, we hopped on the little plane back over to Mahe – the biggest island in the Seychelles – to visit the Four Seasons’ sister resort.

If you imagine a dreamy beach scene from a James Bond movie, then you have the Four Seasons on Mahe in one.

The 170-acre resort is set in a secluded bay, with slick dark wood villas peppering the surrounding jungle-strewn slopes.

As with the Four Seasons on Desroches Island, all of the 67 villas and 27 residences have private pools, sundecks and chic tropical-inspired furnishings that look like they’ve been plucked from an interior design magazine.

To really soak in all the Seychelles has to offer, I recommend exploring beyond the confines of the resort – as comfortable as it might be – to see some of the other sites.

We embarked on a bone-rattling 4×4 tour with the company’s founder Franky to some of Mahe’s hard to reach hilltop spots before he took us for an afternoon of kayaking at the island’s southernmost point.

This kayaking trip through the freshwater lagoon and to the white sand shores of Police Bay comes highly recommended.

It makes for an extremely peaceful paddle with nothing but birdsong, the sound of falling coconuts, and the waves crashing beyond to serenade you.

The following day, the hotel helped us to arrange a hiking trip to Morne Blanc, the third highest mountain in the Seychelles at 2,188ft (667m).

If you are a keen hiker then you will be in your element travelling around this string of islands as there are plenty of trails to pick from to suit all abilities.

The return trip up Morne Blanc took us around 90 minutes at a good pace and with stops along the way.

The trail is entertained with snake-like tree roots so be careful as you go but the views from the top are well worth the sweaty schlep.

At the top, there is a decked viewing platform so you can stop and take some photos and take your time soaking up the sun-drenched coastal panorama.

If you’re travelling with local tour guides make sure you pick their knowledge about the flora and fauna as they are like walking encyclopedias when it comes to nature.

Our trekking guides, Julianne and Roberto made numerous stops on our way to and from the mountain to point out tea plantations, pick guava and fill us in on the island’s fascinating history.

The Seychelles was first inhabited in the late 18th century after being claimed by French, but the British then seized control in 1811.

While the country seized independence in 1976 there are still lots of remnants of its European past, with French, English and French-based Creole being the national languages, UK-style dustbin bins dotted around, British street signs lining the roads and there’s even a ‘mini Big Ben’ taking pride of place in the characterful capital Victoria.

If you can, make time for an hour or two in the port-side city. Here you will find colourful street scenes, with the fruit and fish market being at the heart of affairs.

After 10 days in the Seychelles it was hard to part ways with this gem of a place.

It might have some of the world’s best beaches, but there’s lots more to this place than its picture-postcard shores.