Inside the restaurant that refuses to serve vegan food: From fried potato with caviar to duck-heart skewers, MailOnline tries the £120 tasting menu at two-Michelin-star Sat Bains (and stays the night)

To say Restaurant Sat Bains is in an incongruous location is an understatement.

This Nottingham eaterie with rooms, named after the charismatic chef/patron, has a dazzling list of accolades – two Michelin stars, five AA rosettes, rated No1 restaurant in Britain in 2018 by TripAdvisor and named fourth in the 2019 Harden’s Top 100 Best UK Restaurants.

Yet it sits next to a dual carriageway flyover down a frankly dodgy-looking lane (we have to swerve around broken glass when we arrive) and underneath an electricity pylon. 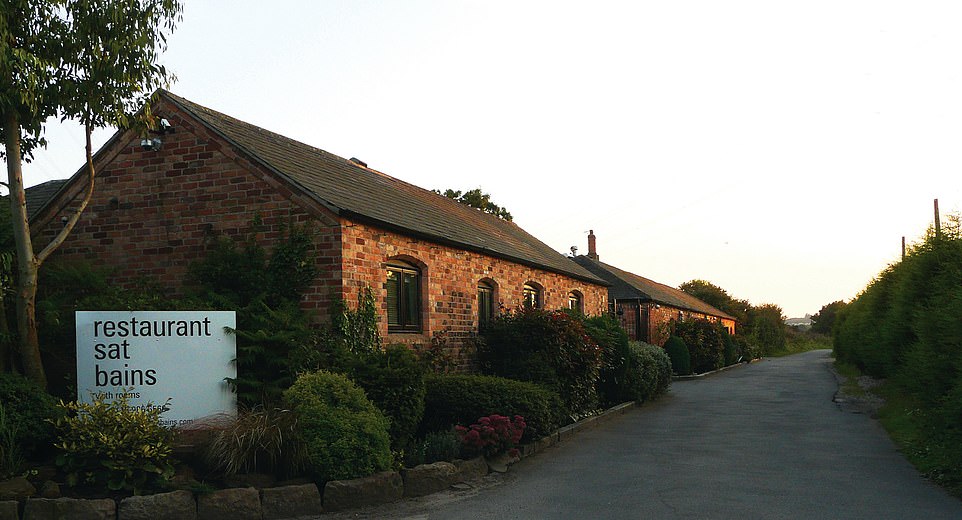 Restaurant Sat Bains has a dazzling list of accolades – two Michelin stars, five AA rosettes, rated No1 restaurant in Britain in 2018 by TripAdvisor. Yet its surroundings are a tad drab 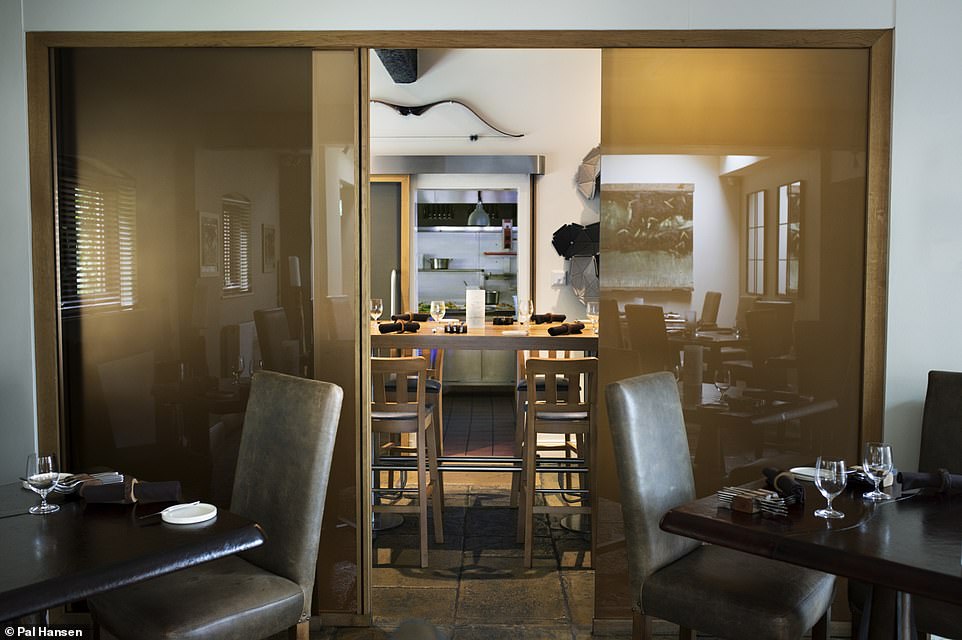 There are two main menu options available – a £105 seven course menu and a £120 10-course offering. Pictured is the main dining area with a section of the kitchen in the background

However, once you pull into the gravel courtyard, the drab surroundings melt away as if Harry Potter-style sorcery is at work and you become lost in a mini realm of breathtakingly fine dining and world-class hospitality in exquisitely furnished renovated Victorian farm buildings nestled next to an urban garden. With beehives.

So yes, spoiler alert – it lives up to the hype.

Though vegans note this caveat – Great British Menu winner Mr Bains won’t cater for you as his business model is based around seven (£105) and 10-course (£120) non-vegan tasting menus. And that’s not something he’ll ever change, partly because he believes that serving vegan food in his restaurant would be ‘a rip-off’, that the cost of the ingredients would not be the same and he feels that it would be wrong to charge a vegan guest £120 on that basis.

Anyway, we arrive at 3pm to check-in – we’re staying the night – and our table isn’t until 7.30. However, we don’t have to wait until then for a demonstration of the kitchen team’s prowess because the receptionist gives us two ‘welcome’ homemade chocolate brownies – and they are utterly heavenly.

‘That’s proper chocolate for sure,’ proclaims my foodie French other half. 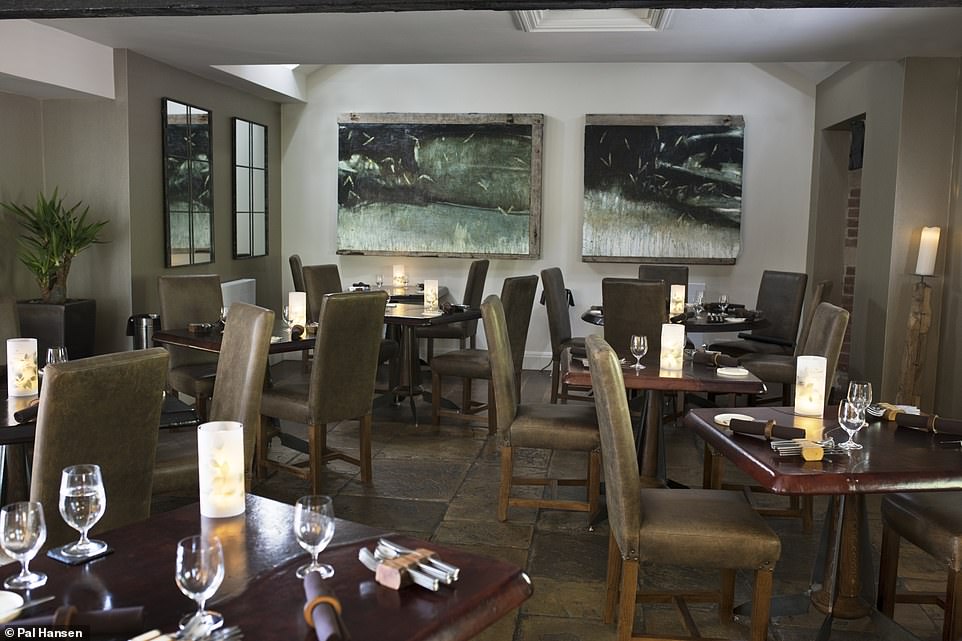 Ted enjoys a 10-course tasting menu that he describes as ‘a roller coaster of highly technical culinary delights’. Pictured is the main restaurant 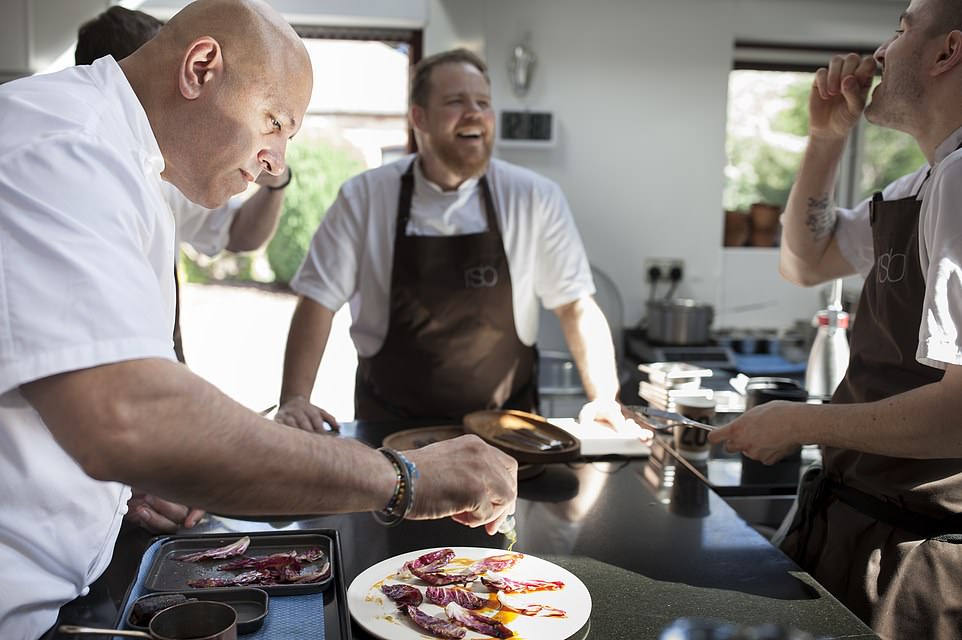 Chef/patron Sat is pictured here on the left with some of his team, including head chef John Freeman (centre)

There are seven recently refurbished individually styled double en-suite rooms in total. We’re in Room Three, in a separate building from the main block.

And it’s rather super – spacious, and an impressive and thoughtful blend of modern, glamorous and luxurious, boutique-y elements in greys and whites, with furniture whittled from rich dark woods. And it’s all so clean I half wonder if we’re the first-ever guests.

There is a clawfoot bath; Aesop toiletries; a super-sized wall clock, a comfy L-shaped sofa; a vast, beautifully thick blanket to snuggle under and a smart TV with Netflix and Apple TV that extends out so you can watch it from the plush bed. 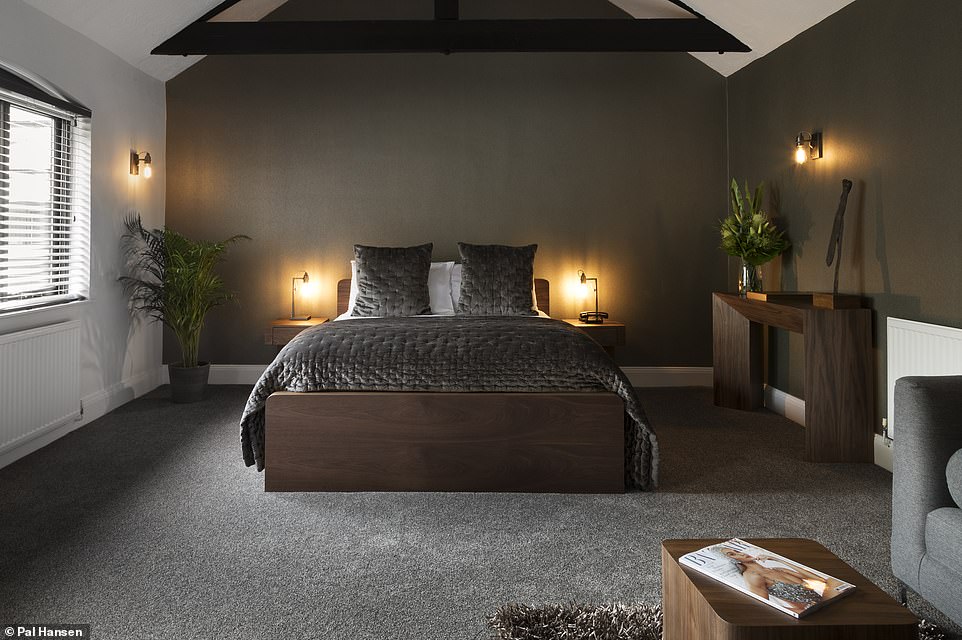 Ted stays in Room 3 at Sat Bains, pictured. It features a smart TV with Netflix and Apple TV that extends out so you can watch it from the plush bed. And it’s ‘an impressive and thoughtful blend of modern, glamorous and luxurious, boutique-y elements in greys and whites’ 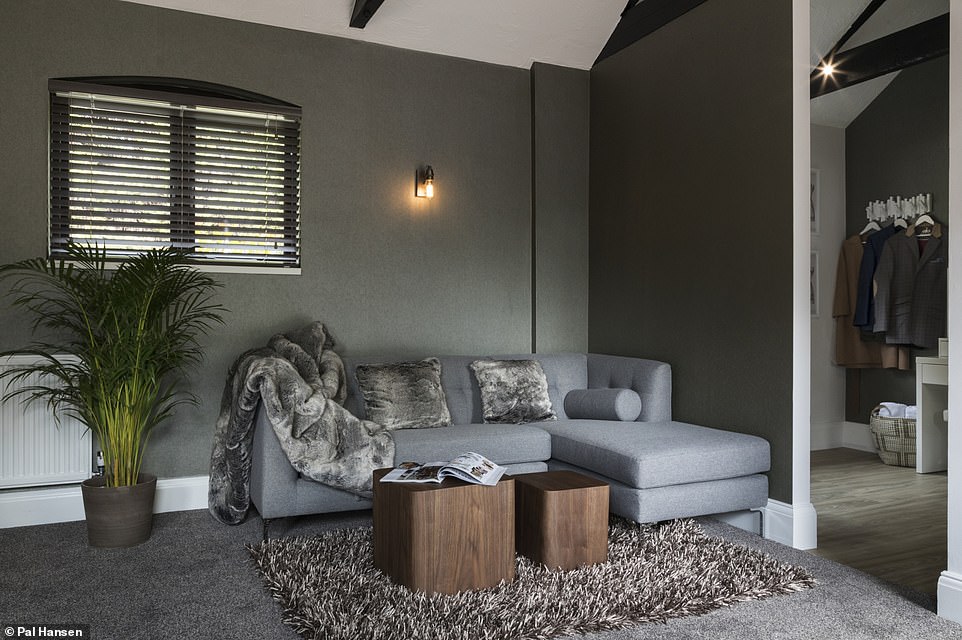 Pictured here is Room 3’s stylish L-shaped sofa, the ‘vast blanket’ and the dressing area to the right

I drove to Sat Bains from London in a mouthwatering new BMW 1 Series  – an F40 118i (below, outside my room) with all the sporty and tech-y trimmings. 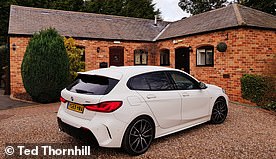 It proved more than a match for the potholes outside the eaterie. And looks saucy to boot. So perfect for a foodie road trip.

I also like the refreshments tray that contains jars of ground roasted coffee and a filter jug – Sat Bains is not an instant coffee kind of establishment – and the dimmable filament lights.

A gentle foray into the wines-by-the-glass list helps pass the time, with a prompt room service operation delivering a crisp Schloss Gobelsburg Gruner Veltliner, from the Kamptal region in Austria (£11); a Philippe Alliet’ Chinon Tradition’ Cabernet Franc, from France’s Loire Valley (£10); a Weingut Moric Blaufrankisch from Burgenland in Austria (£11) and a velvety Masseria Li Veli Susumaniello, made in Puglia, Italy (£12).

At 6.30 we put our room’s dressing area to use and don our dining attire, then head to the bar for an aperitif and the main event – a 10-course tasting menu and paired wines.

After a lovely glass of Le Chapitre Champagne – the table next to us opt for sake, which impresses the restaurant manager – we’re shown into the restaurant for an experience that’s as much an event as it is a meal. 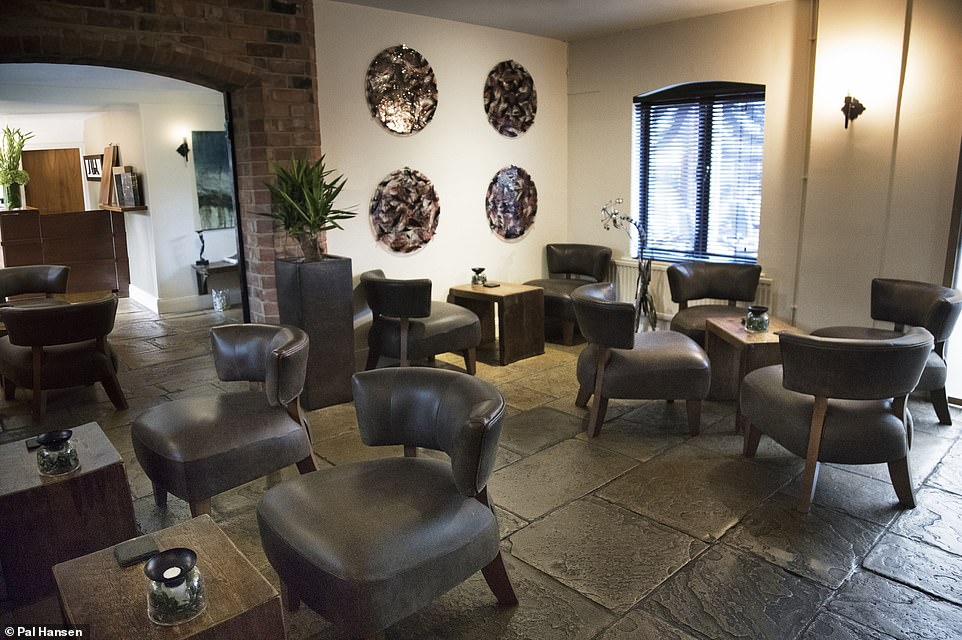 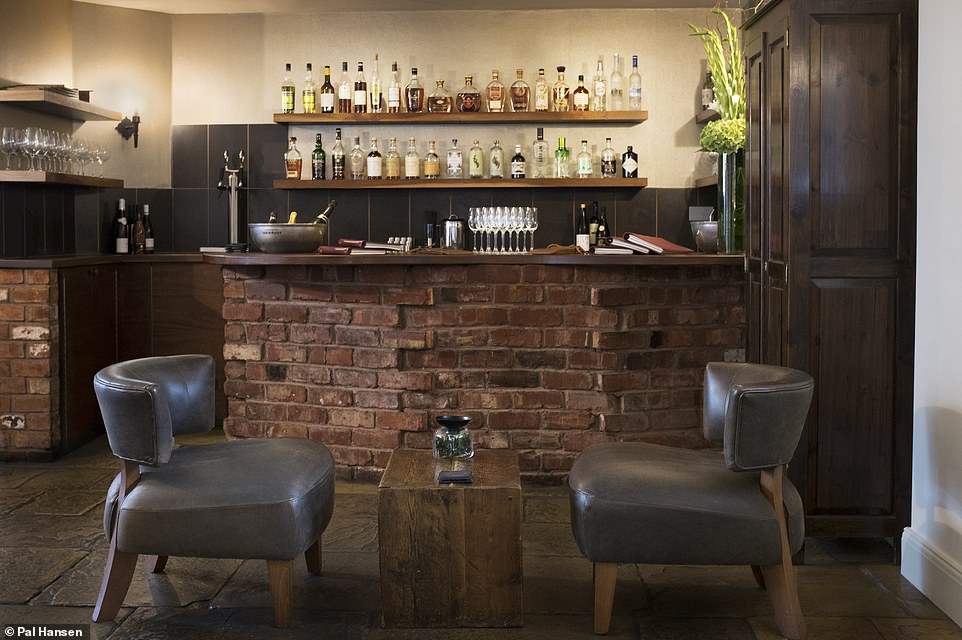 Ted has ‘a lovely glass of Le Chapitre Champagne’ in the bar, pictured, for his aperitif. But there are plenty of options – including sake

Mr Bains takes your taste buds on a journey that incorporates the five tastes – salt, sweet, sour, bitter and umami – and the menu has a key that denotes the flavours in each dish, many of which are made using ingredients from the onsite garden.

To highlight the differences and engage you with the concept the first course, simply called ‘Introduction’, comprises five exquisite savoury morsels that are pure examples of each taste – a samphire, bonito and seaweed fritter (salt); deep-fried onion textures in an onion consommé (sweet); balsamic ice cream on a sourdough cracker (sour); a tapioca cracker flavoured with seaweed, avocado and olive oil puree, green tea and seaweed salt (bitter), and a gougère with pumpkin puree, crunchy parmesan and a soya glaze (umami). 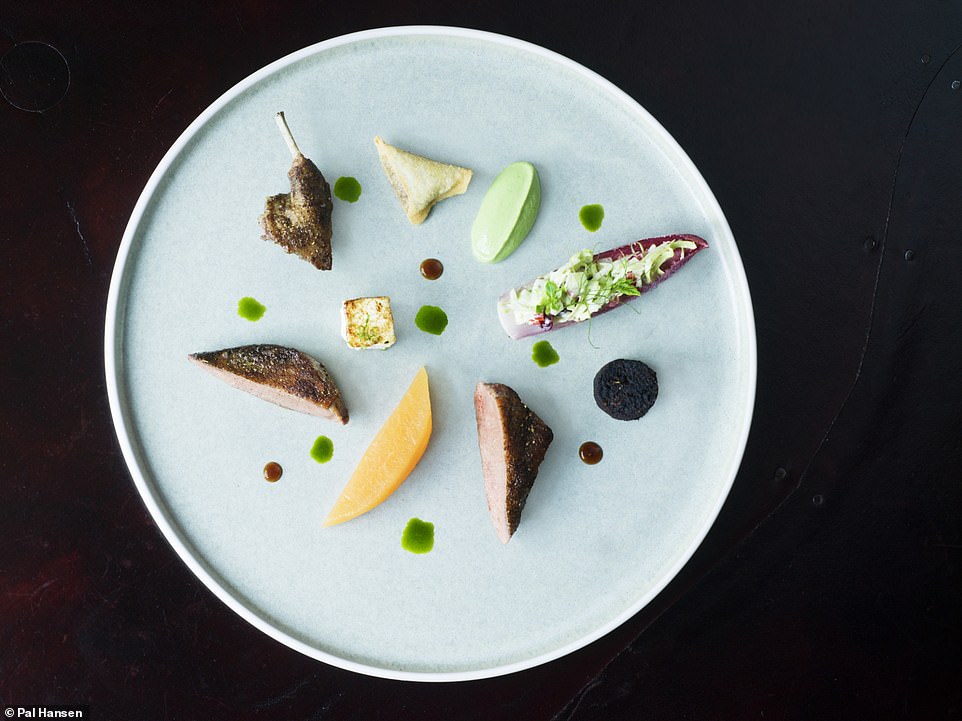 Pictured is an example of one of Sat’s stunning dishes – black pudding of pigeon with shawarma spices, samosa, melon, feta, mint, yoghurt and barbecue sauce 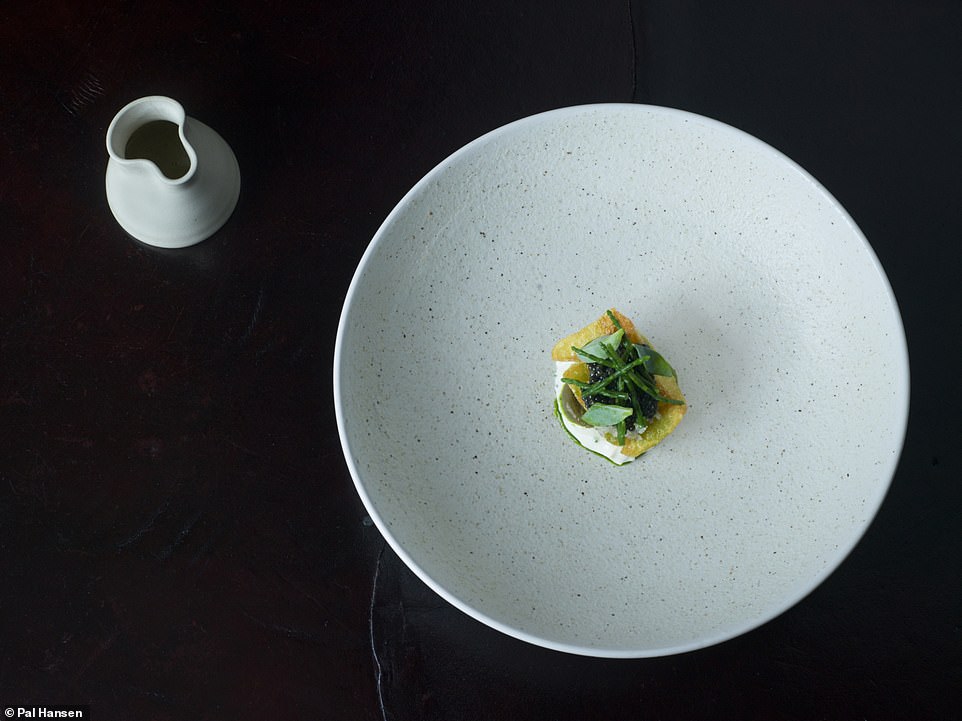 And at the end, for a dish called ‘Conclusion’, we’re given five dessert morsels that demonstrate the tastes once more, to book-end the experience – a salted caramel chocolate truffle (salt); a white chocolate and mandarin ice cream cone with pine gel and pine sugar (sweet); dehydrated pineapple with mint sherbet (sour); a ‘mushroom trifle’ made from mushroom and chocolate puree, candied mushrooms, mascarpone mousse, dried cep and cocoa powder (bitter) and miso-flavoured fudge with fresh lime zest (umami).

In between these is a roller coaster of other highly technical culinary delights.

Venison from deer culled at nearby Wollaton Hall with beets and truffle is a sensational flavour bomb; the partridge ragu comes with ‘tagliatelle of turnip’, a clever sleight of hand that sees the turnip cooked in such a way that you momentarily think it’s actually pasta and Goosnargh duck is presented as a ‘mixed grill’ – complete with a mini-kebab stick of meat. 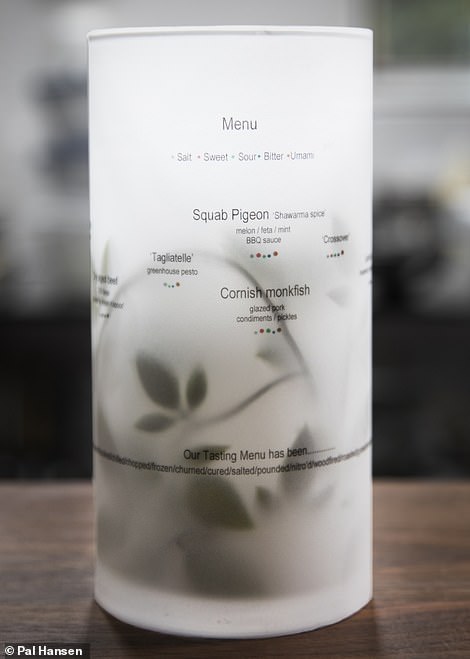 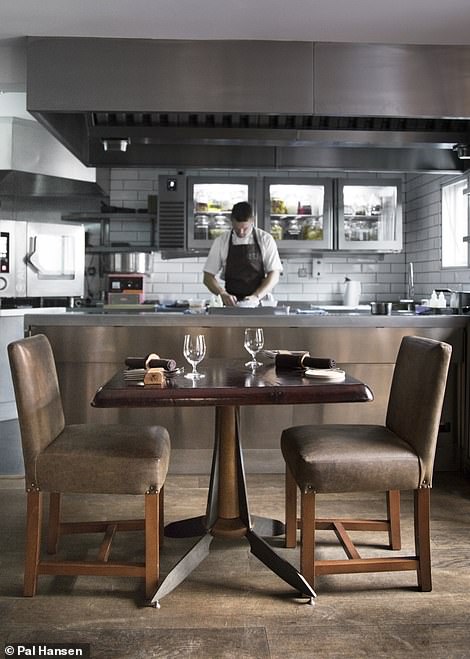 The menus appear on table lanterns so guests can follow their culinary adventure course by course, left. Pictured right is the Sat Bains ‘Nucleus’, where guests can ‘taste dishes being put through their paces before they make it to the main menu’

Sat feels that serving a vegan menu in his restaurant would be a rip-off to his guests, because he charges £120 per head for the tasting menu and his business model is based on that.

He says that the menu would, of course, ‘be produced with the same love, care and research’ that all his food is created with, but the cost of the ingredients would not be the same and he feels that ‘it would be wrong to charge a vegan guest £120 on that basis’.  He has ‘a carefully structured business employing 48 people that’s open four days a week for dinner only’. The pricing structure of his menus ‘are pitched at a certain level with those running business costs and responsibilities in mind’. Hence his decision not to offer a vegan menu for the past 20 years.

No part of the duck goes to waste, with the dish comprising wood-fired breast, sausage made from the minced neck, a rillette of the legs wrapped in potato and a brochette of the heart and liver served with a roasted mushroom and glazed in teriyaki. There’s also a black pudding made from the minced offal, plus mandarin segments, and dehydrated and roast tomato.

We also savour a mushroom quiche skillfully sliced and assembled to resemble a rose bud, a comforting steam-fried potato with Baeri prestige caviar, a scrumptious chocolate marquise, a delicate lattice of cinnamon-coated potato that resembles a waffle, with crème pâtissière, vanilla ice cream and blackcurrant jam – and pieces of bread that resemble muffins, accompanied by seriously delicious butter.

Every step of the way Sat uses temperature and flavour combinations and texture contrasts that wow and surprise.

The wines, meanwhile, are the perfect accompaniment – the standout bottles being a 2016 Chablis Grand Cru Vaudesir by Louis Michel & Fils from Burgundy; a 2017 Pictus VI by Painted Wolf Wines from South Africa and a 2014 Chryseia by Prats & Symington from the Douro region in Portugal.

Our sommelier describes them and explains how they complement the food with passionate expertise. 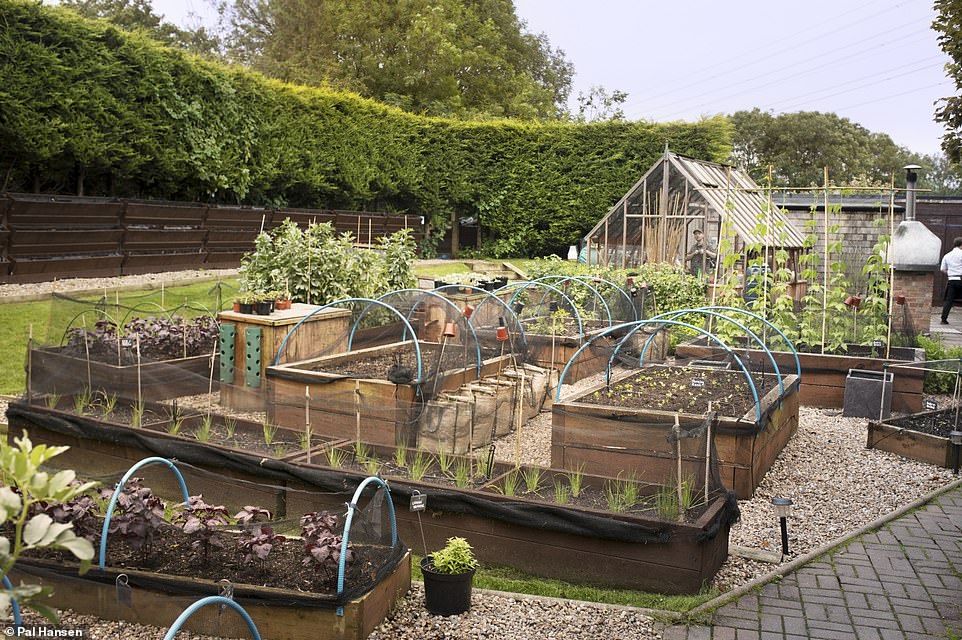 The Sat Bains urban garden, which produces around 40 per cent of the plants, salads and herbs used in the restaurant 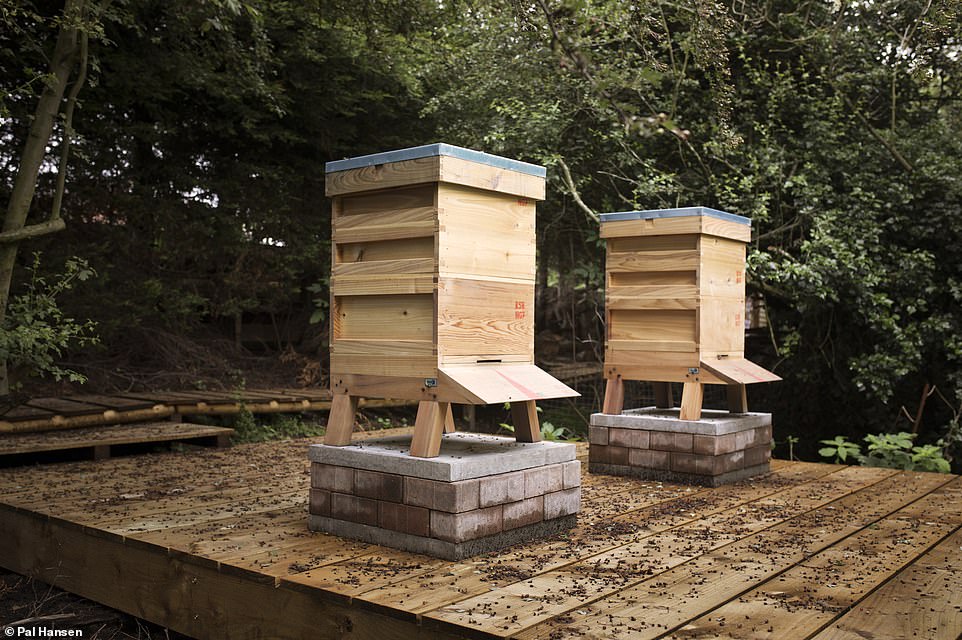 In April 2019 Sat Bains installed two beehives in the garden, pictured. The honey the bees produce is ‘quite citrus-y and light in colour’ 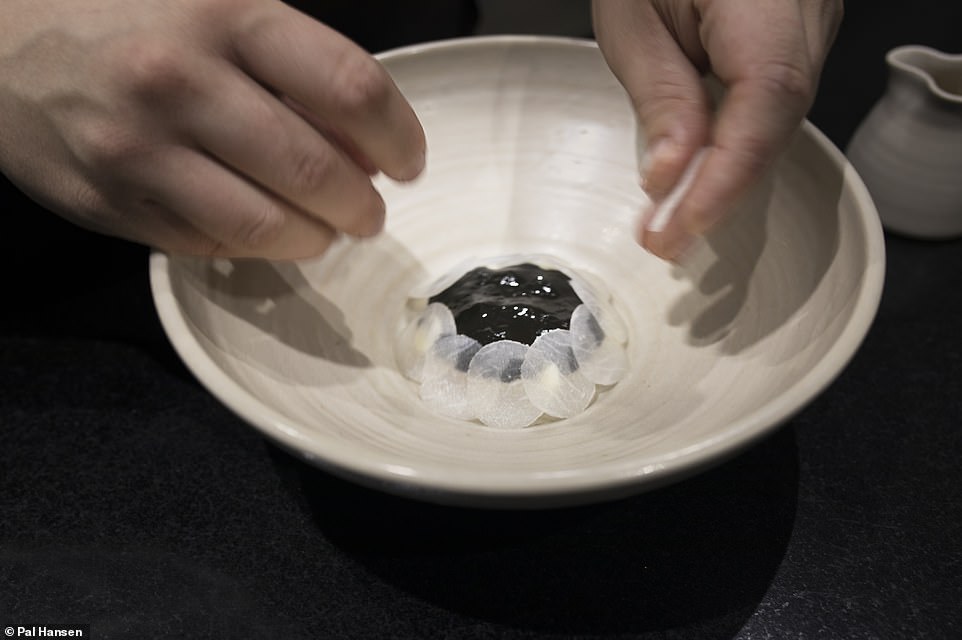 Ted concludes: ‘Add my breathless hyperbole to the reams of praise Sat has deservedly received’ 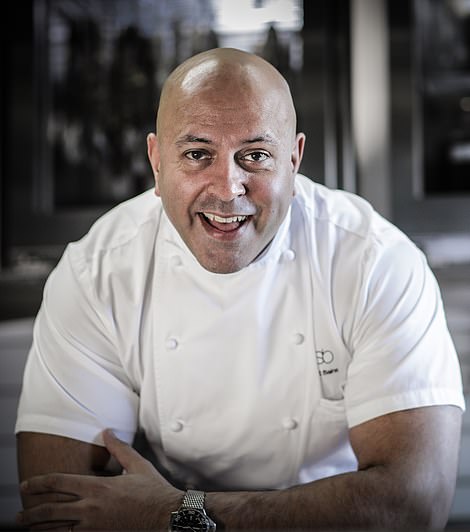 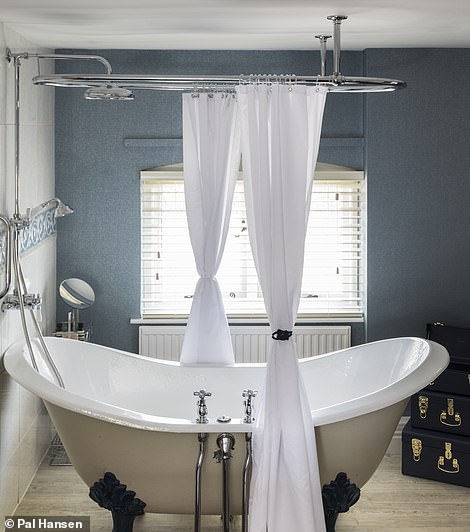 Sat Bains, left, is a past winner of the Great British Menu. Pictured right – one of the retro-chic bathrooms in the main building

We even get a brief geology lesson, learning how 200million years ago the Burgundy region was underwater, with the salt left behind helping to give wines grown there a delicious minerality.

The furnishings? Refined, generally incorporating dark wood, and bespoke. I particularly admire the beautifully upholstered lounge chairs and the tables, which are covered in Wollaton Hall deer skins.

I also love the lamps on the tables that display the menu so that you can track your odyssey course by course.

One bonus of staying the night is that you get to experience the Sat Bains breakfast, which is served in one of the main dining rooms and is sensational in its own right.

In the morning we’re thrilled to see that the delicious butter has returned, this time accompanied by wonderful homemade jam and honey from the RSB hives.

As I tuck into a beautifully presented fully flavoursome full English and pour coffee from an enormous Le Creuset coffee pot, I ponder the Sat Bains experience.

Mr Bains, and his wife, Amanda, who oversees the rooms, have most certainly created something special.

Our room comes close to full marks and represents exceedingly good value (see the Travel Facts box for the prices).

Still, there is room for a soupçon of improvement.

I’d replace the cheap plastic loo seat (that doesn’t stay up) with wooden ones to match the beautiful wooden furniture elsewhere, and the plastic rain shower head with a stylish metal attachment to blend in with the rest of the industrial-retro-chic plumbing. A shower hose would be good, too (other rooms have them).

And if Michelin stars are ever distributed for ironing boards, the wonky-legged number we were given is in the running for minus two…

As for the restaurant… well, add my breathless hyperbole to the reams of praise Sat has deservedly received for it.

Will you notice that it’s a step up from a Michelin-star restaurant? Yes you will. Is it Britain’s best restaurant? It surely must be a contender.

Compliments to the chefs!