What’s it REALLY like to fly one of the world’s most advanced airliners? MailOnline finds out by taking the first-officer’s seat in a multi-million-pound British Airways Dreamliner simulator

I’m inside one of the world’s most advanced video game arcades – British Airways’ Flight Training Centre at Heathrow.

This astonishing hub houses a row of 16 full-motion multi-million-pound state-of-the-art flight simulators that are so realistic experienced pilots can become qualified to fly an aircraft on them without taking to the skies for real.

The simulators cover every Airbus and Boeing aircraft type in the BA fleet, and BA is giving me the chance to get behind the controls of one of the most advanced – the 787 Dreamliner, which is equipped with fancy heads-up displays for the pilots. And what a remarkable experience it proves to be. Thrilling, nerve-wracking, and fascinating in equal measure. 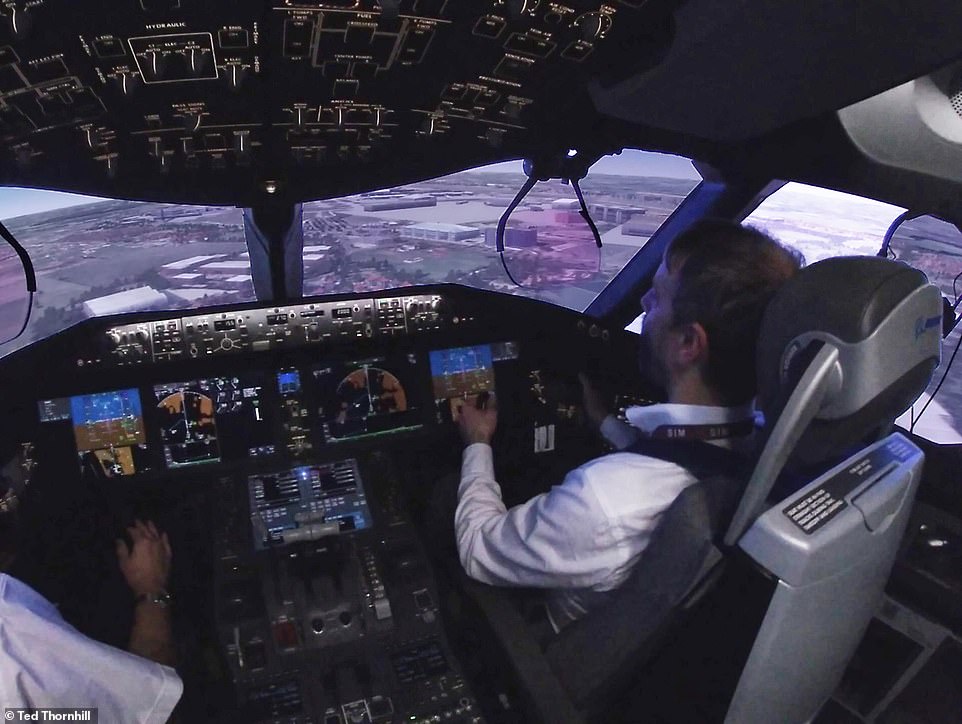 My trainer is one of the most senior pilots at BA, Captain Ian Pringle, the head of flight training, and he puts me through my paces early doors.

As I enter the flight deck, which is, mesmerisingly, more or less identical to the real thing, I’m told that the aircraft is positioned 4,500ft above the Seychelles – and that I’m going to be landing her.

With a bit of help.

The Dreamliner has sufficient tech to be able to land at the Seychelles automatically.

So I can see this in action the plane will fly itself to the runway approach, then I’ll take over.

After buckling in the simulator ‘unfreezes’ and we descend to paradise.

I wonder whether there’s time for a coffee.

Captain Pringle asks me to ‘configure the aircraft’ for the landing and asks for ‘flap 20’.

He points to the flaps lever on the central console to my left and indicates that I need to pull it up and move it to the ‘20’ marker. 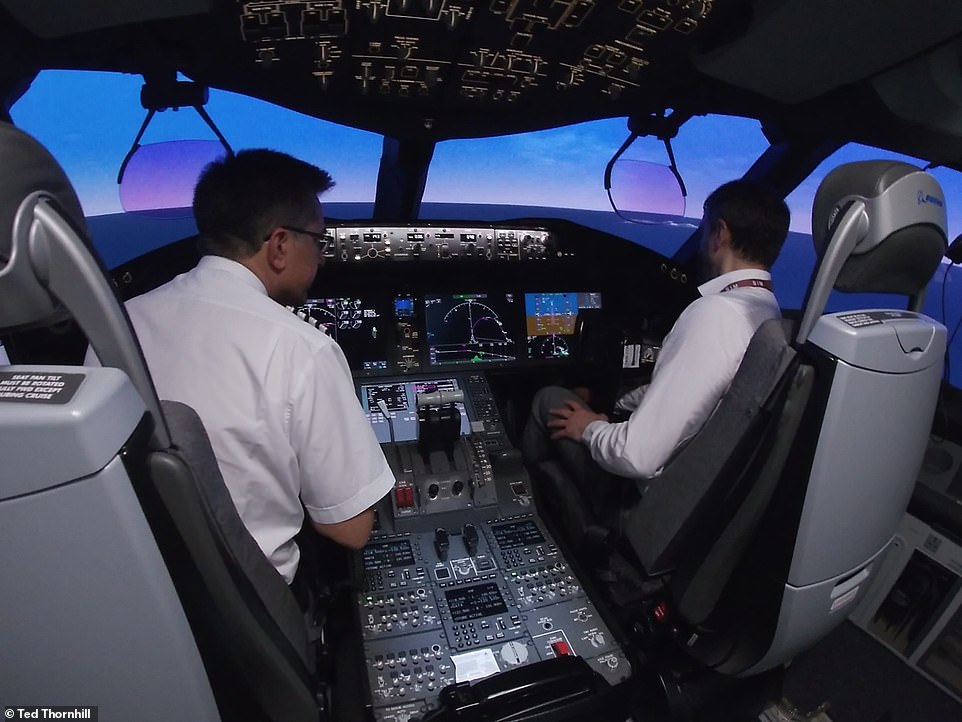 Captain Pringle gets Ted set up in the first-officer’s seat in the Boeing 787 Dreamliner. It takes a few minutes as there is a five-way seatbelt system to grapple with – and it’s crucial all the relevant information in the HUD can be seen without having to move up and down

I pull a lever in front of me that, cunningly, has a little wheel on the handle.

We bank round the north end of the island.

We’re really very close now so it’s time to stare through the really rather cool heads-up display – the HUD.

This Star Wars-esque piece of kit gives Dreamliner pilots crucial information about the aircraft’s orientation and speed, without them having to turn their heads.

Two of the most important symbols visible on the HUD are the steering indications in the middle. One is a big circle with two feet stemming from it – the flight path vector – that displays the flight path and drift angles during flight, and the other is a smaller circle known as the guidance cue, which indicates pitch and roll steering commands.

The guidance cue is preprogrammed and run by the onboard computer – essentially, it tells you where to point the aircraft. 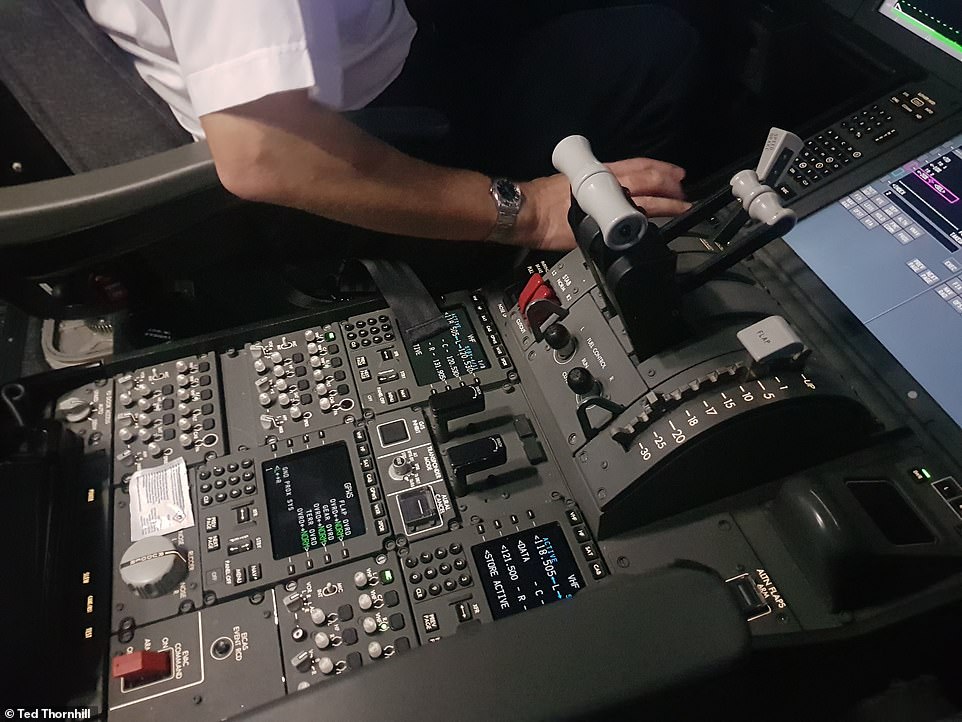 Ted’s first job was to give Captain Pringle ‘flap 20’, which he did by moving the lever pictured above

Move the control column around so that the big circle is over the smaller circle and all will be well, regardless of the weather and terrain.

For now, I don’t need to worry about putting the big circle over the little one because we’re using the ‘automatics’ until the runway is lined up and Captain Pringle will be steering us to the tarmac threshold.

But I’ll soon be having a stab at it – when we ‘return home’ to Heathrow.

Anyway, the Seychelles runway is lining up – showtime.

Captain Pringle explains that what he wants me to do when we’re 30ft above the runway is ‘squeeze back’ the control column. This will put the aircraft in a ‘flare’, a manoeuvre that raises the nose of the aircraft and slows the descent, and ensures the main landing gear (the back wheels) touches down first for a smoother landing.

He stresses that I just need to move the column ‘a couple of inches’ when he says ‘flare’ and that he wants me to ‘set that position’ as I look towards the end of the runway. 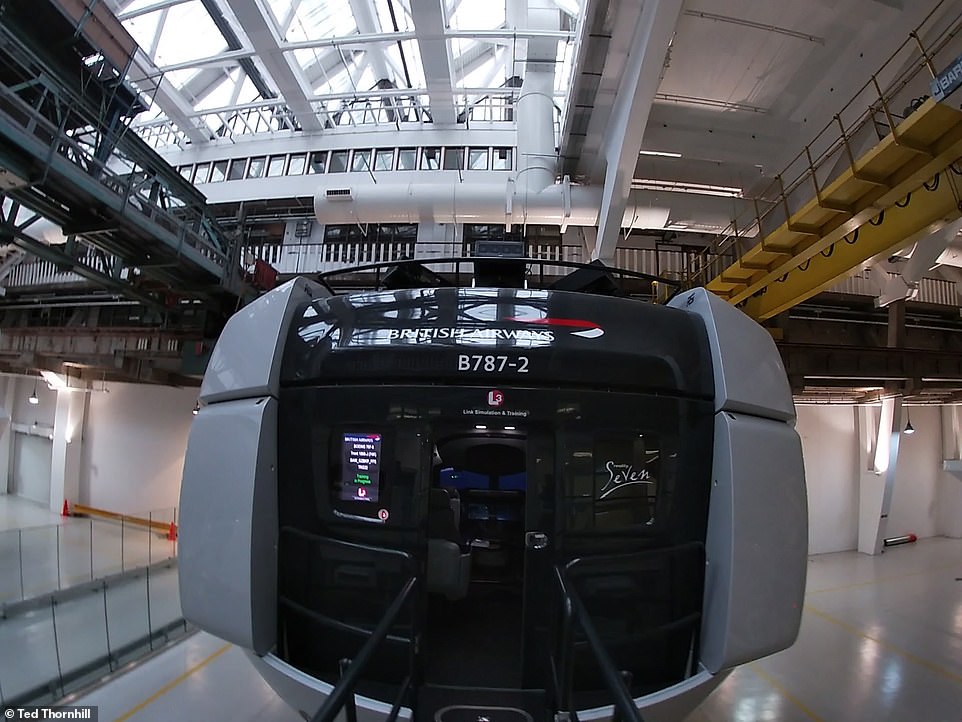 Hi-tech: The 787 simulator is housed in BA’s hugely impressive Flight Training Centre. The sims are in use 24 hours a day, 365 days a year

British Airways’ near 4,500 pilots, as well as flight crew from dozens of other UK and international airlines, are trained on the state-of-the-art simulators, which are in use 24 hours a day, 365 days a year.

Pilots can simulate different weather conditions, events and scenarios, which allow them to prepare for every conceivable situation. They can also programme different airports to practice taking off and landing at different locations around the globe.

British Airways’ pilots are put through their paces on the simulators every six months to test their flying skills to the limit. Maintenance for the simulators is provided round the clock by a dedicated and highly experienced engineering team.

The visual system on the simulators is controlled by three angled projectors, which create a computer-generated image spanning 180 degrees and has full depth perception.

The Flight Simulators are designed to feel just like the real thing. They are ‘Zero Flight Time’ approved, which means an experienced pilot can go straight from qualifying in a simulator to flying a real aircraft carrying customers.

As the plane aligns itself, I’m feeling nervous. It really does feel like I’m at the front end of a real 787.

The radio altimeter says ‘one thousand’, then ‘five hundred’, then ‘one hundred’.

I pull back as instructed. The nose goes up.

There’s a slight jolt and we’re down.

The auto-brakes engage, the engines are in reverse thrust and the aircraft slows down.

I keep the plane on the centre line using the two rudder pedals. Small corrections early is the name of the piloting game, I’m told.

‘You’ve landed a 787 on a relatively short runway and done very well – the flare point was good,’ says Captain Pringle.

My heart is beating fast as I bring the aircraft to a halt by pressing the top of the two rudder pedals.

While BA training standards captain Dave Willsher sets the simulator up I ask Captain Pringle if BA gives its pilots the equivalent of the Star Trek Kobayashi Maru test – a scenario that’s not survivable.

No, he says – but it does give them the know-how to deal with anything that’s thrown at them.

He says: ‘We train and develop pilot competencies. It would be impossible to train for every possible permutation of a non-normal event or emergency situation, but by training the competencies, then we can equip the pilot to deal with any conceivable event. So the equivalent test to the one you’re talking about would be cascading failures. So one thing happens, then another, then another complexity, then another complexity. And we train our pilots to deal with that.’

I won’t have to deal with any cascading complexities, thankfully, just pulling back the control column as we reach take-off speed, which Captain Pringle will indicate by telling me to ‘rotate’.

Before we begin hurtling, Captain Pringle gives me a recap.

He says: ‘I want you to squeeze the rudder pedal, left or right, small changes early to keep the aircraft on the centre line. And your gaze should be through the HUD towards the end of the runway. If you look to the end of the runway you’ll find that the changes you’re making are smaller and more accurate. If you end up looking very close in, you tend to over-compensate.

‘We will accelerate down the runway and I will ask you to rotate. You’ll just squeeze back on the control column just a couple of inches. There’s not a lot of force required.

‘And once we’ve done that, what I’m going to ask you to do, looking through the HUD, you see the horizontal bar with the V in the middle, that will rise, and I want you to position that on the dotted line which will be appearing above it. So manoeuvre the aircraft symbol onto the dotted line.

On goes the thrust and we’re off.

Through clever vibrations and feedback through the control column you get a very real sense of acceleration. I’m almost completely fooled. 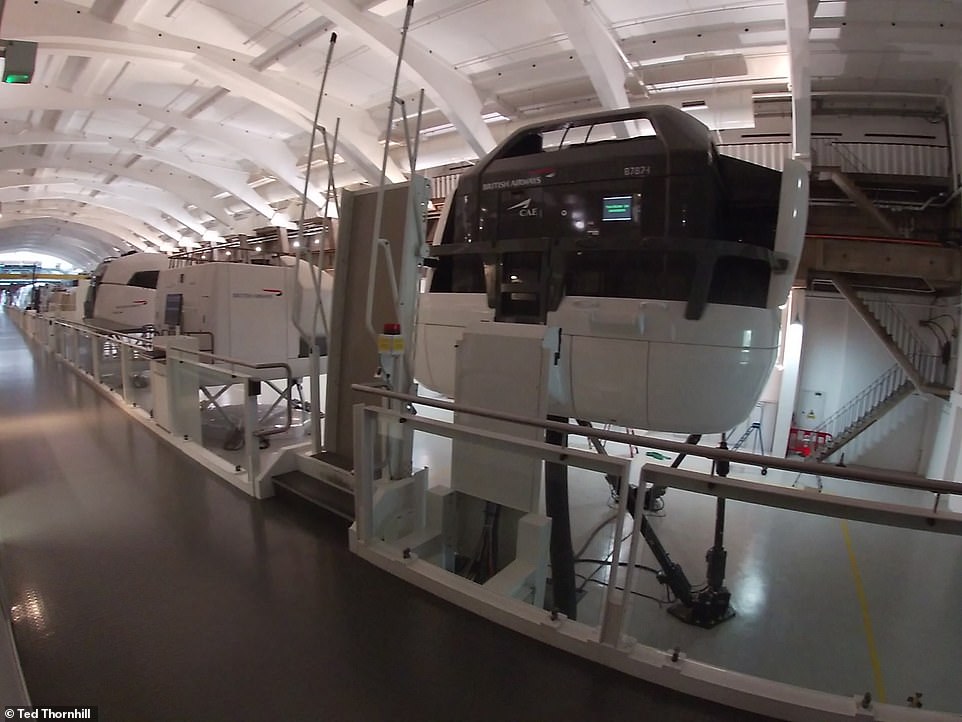 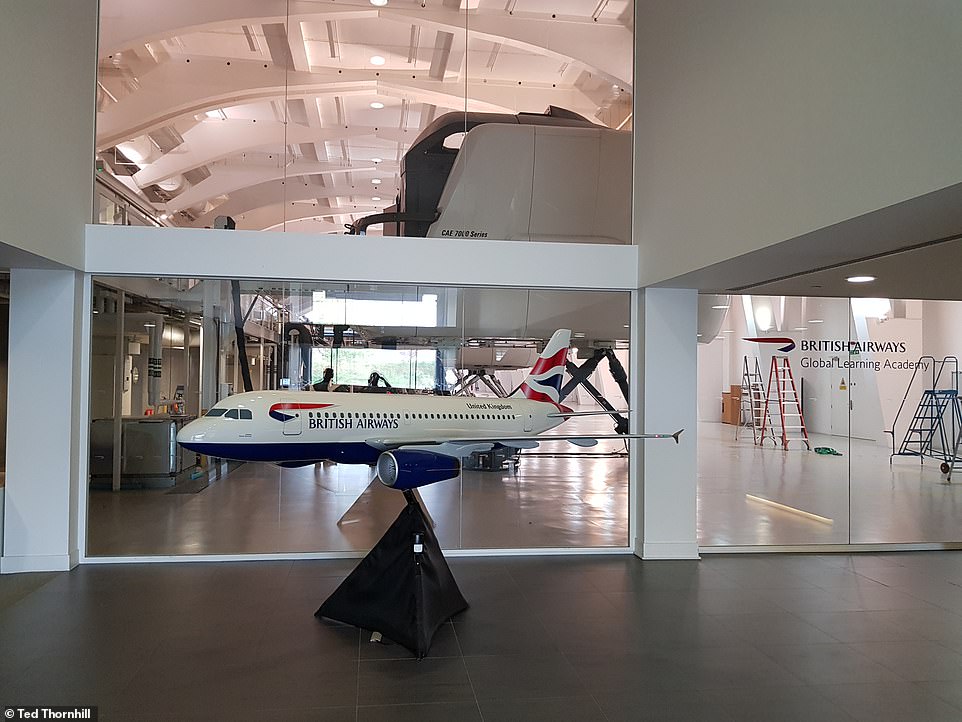 In the simulators pilots can simulate different weather conditions, events and scenarios, which allow them to prepare for every conceivable situation. Pictured is the entrance to the Global Learning Academy 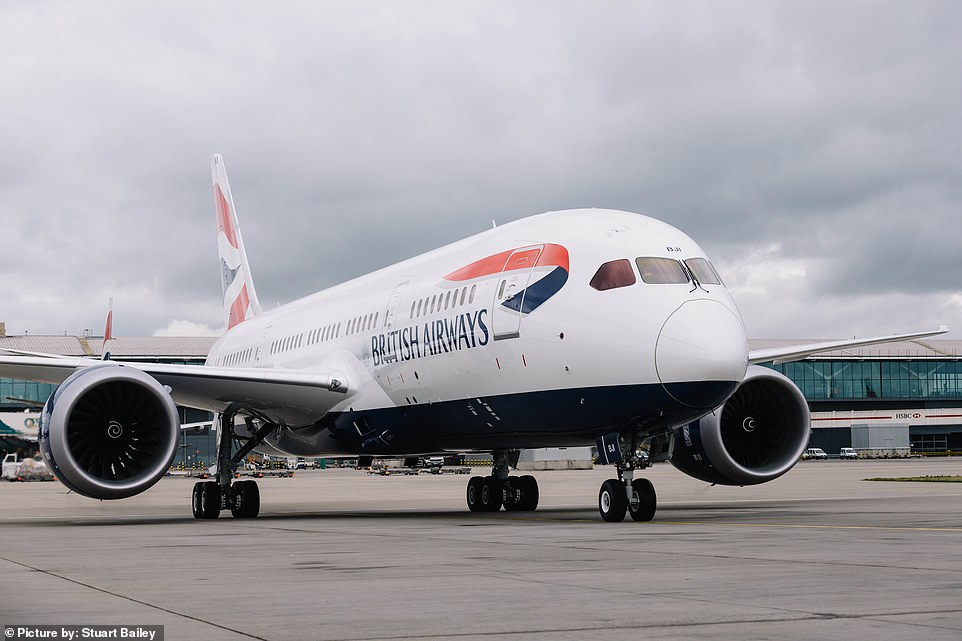 I manage to keep her steady with the rudder pedals and the onboard computer says ‘V1’ after a few seconds of hurtle.

This means we’ve reached the point of no return and must proceed skywards.

Captain Pringle says ‘rotate’ and with what seems like the most ridiculously gentle squeeze of the control column considering the size of the aircraft – up we go.

With mountains approaching Captain Pringle announces that he has control and banks the aircraft round to the right.

With the terrain out of the way I take control again and follow the guidance cue on the HUD, steering us away from the islands.

In my head Richard Wagner’s Ride of the Valkyries is blasting away.

With the Seychelles mastered it’s time to head home to London Heathrow Airport.

We’re skipping the movies and fizz though and heading straight to runway 27L. 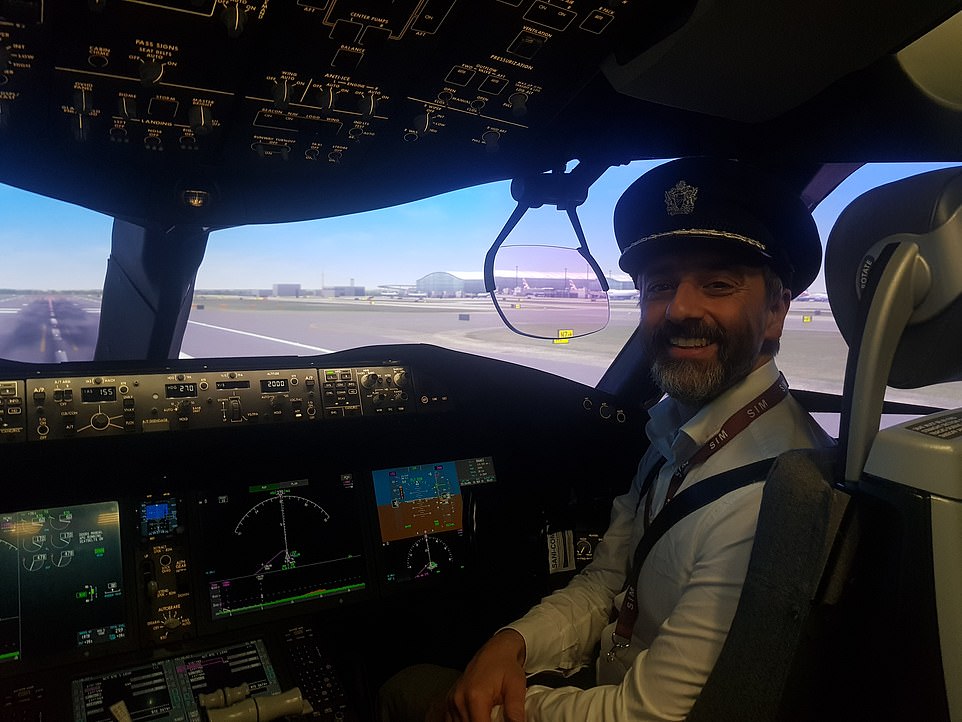 Ted pictured after safely landing the aircraft at Heathrow Airport. He received some help from the airport’s ILS (instrument landing system), which is a three-degree beam emanating from the runway 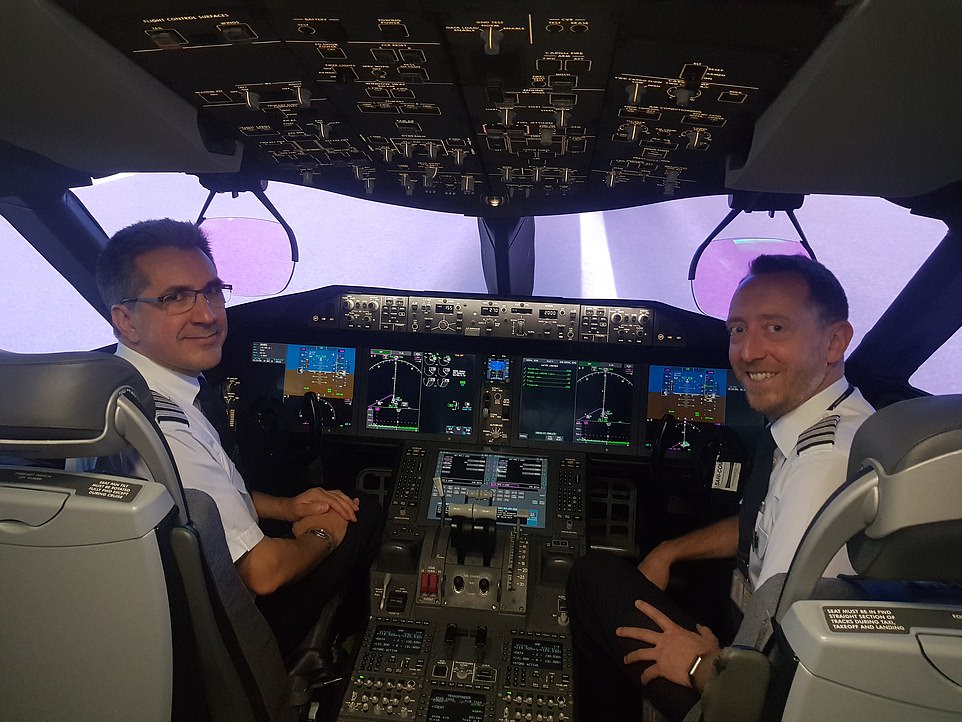 Captain Pringle gives me two goes at putting the aircraft down without the aid of the autopilot.

In some ways, it’s like playing a computer game – but one with very high stakes.

The two approaches are coupled to the ILS (instrument landing system), which is a three-degree beam emanating from the runway.

The guidance cue guides the aircraft down this beam to the runway threshold.

My first attempt is a bit disappointing. For a couple of seconds we float above the runway without the wheels touching down and Captain Pringle needs to step in and tweak the landing.

Apparently my ‘pitch attitude’ was a bit high.

My second go is a resounding success and Captain Pringle is moved to say – ‘you should be pleased with that’.

I most certainly am. Cue cascading states of elation.

To find out where you can take a British Airways Dreamliner to, click here. 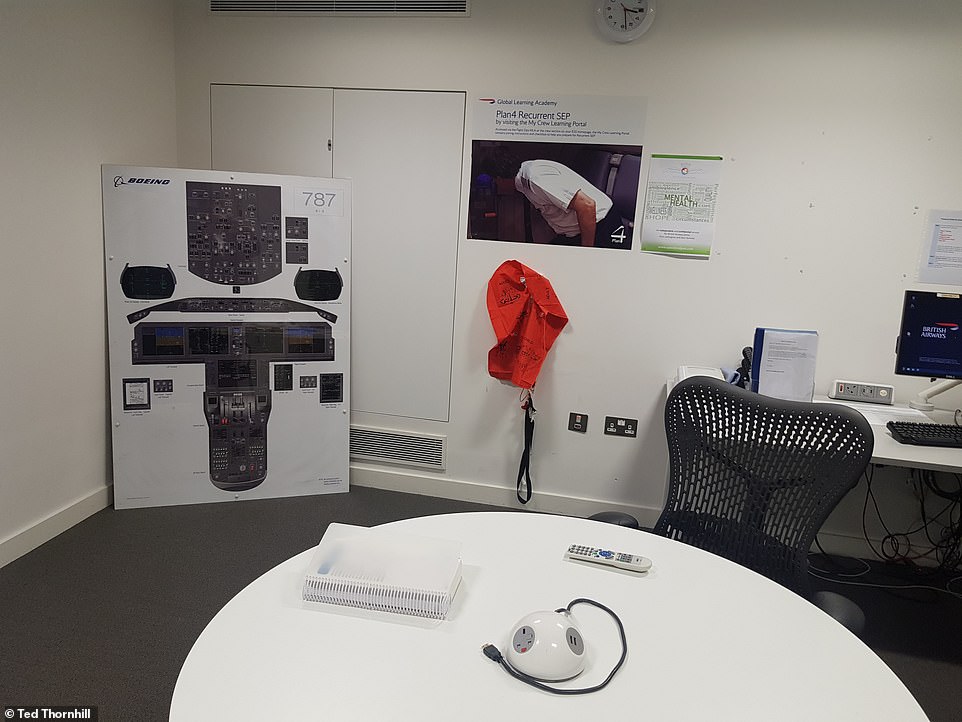 Pictured is one of the debriefing rooms in the Flight Training Centre, where simulator sessions are analysed