Making an entrance! The world’s grandest hotel lobbies, from a sexy lair in Buenos Aires to a flower-filled hallway in Paris

From wacky chandeliers, to triple-height ceilings and dazzling flower displays, these hotels certainly leave a lasting impression with their grand entrance ways.

MailOnline Travel has scoured the world for the best hotel lobbies, from the heart of London to the depths of Tokyo and the wilds of Kenya.

One of the most breathtaking is the Bellagio in Las Vegas, which has a mesmerising ceiling covered with 2,000 hand-blown glass blossoms in a bright rainbow of hues. Scroll down to step into a world of hotel wonderment… 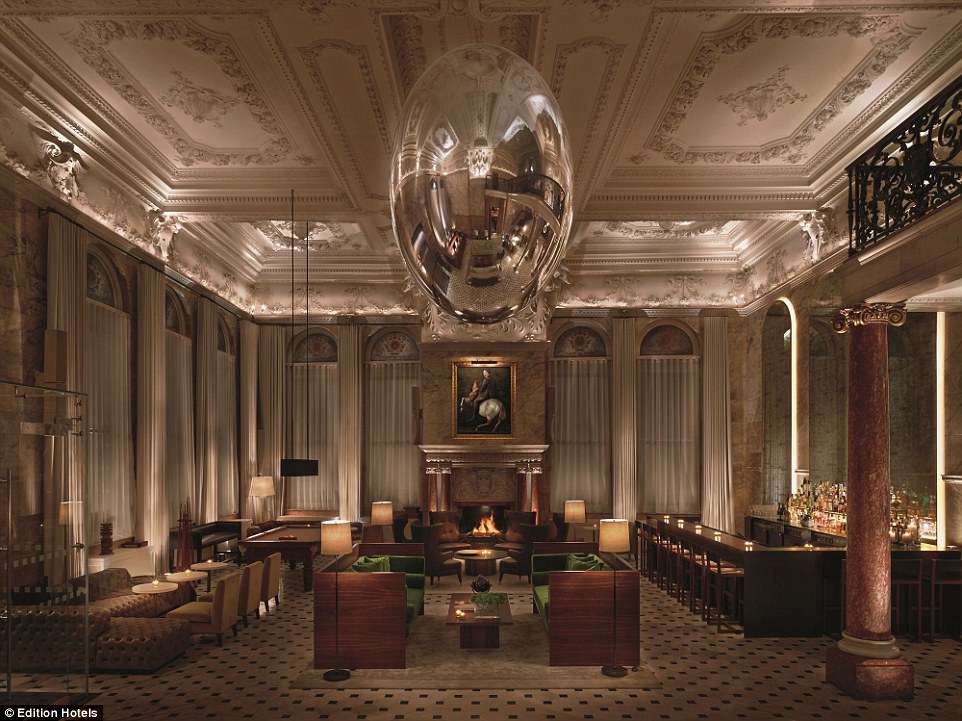 The London EDITION was designed by hotelier Ian Schrager and occupies a row of Georgian townhouses in Fitzrovia.

The London EDITION is a boutique hotel and dining spot in the heart of the capital.

It was designed by hotelier Ian Schrager and occupies a row of Georgian townhouses in Fitzrovia.

The lobby boasts a triple-height ceiling with a giant egg-shaped silver orb hung centrally, marble columns and chic furnishings. There is also a swanky cocktail bar, roaring fire and pool tables for guests to enjoy. 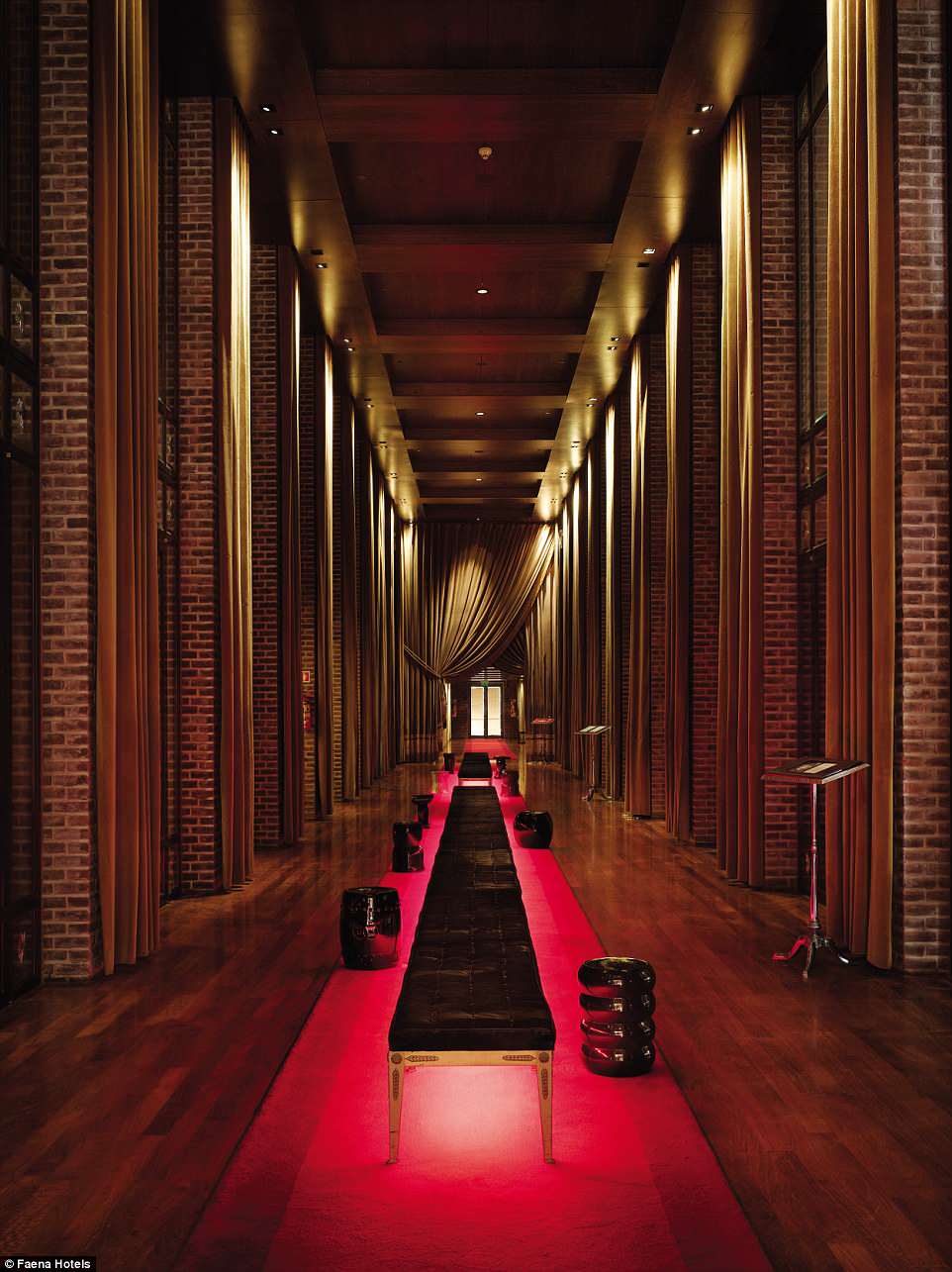 Refurbished and decorated by designer Philippe Starck, the Faena Hotel in Buenos Aires has 105 rooms

The Faena Hotel in Buenos Aires oozes with sexy sophistication, with dark lighting and swathes of blood red running throughout.

The main lobby features a long corridor with high ceilings and long draped curtains giving an Alice in Wonderland kind of feel.

Refurbished and decorated by designer Philippe Starck, the converted warehouse has 105 rooms. 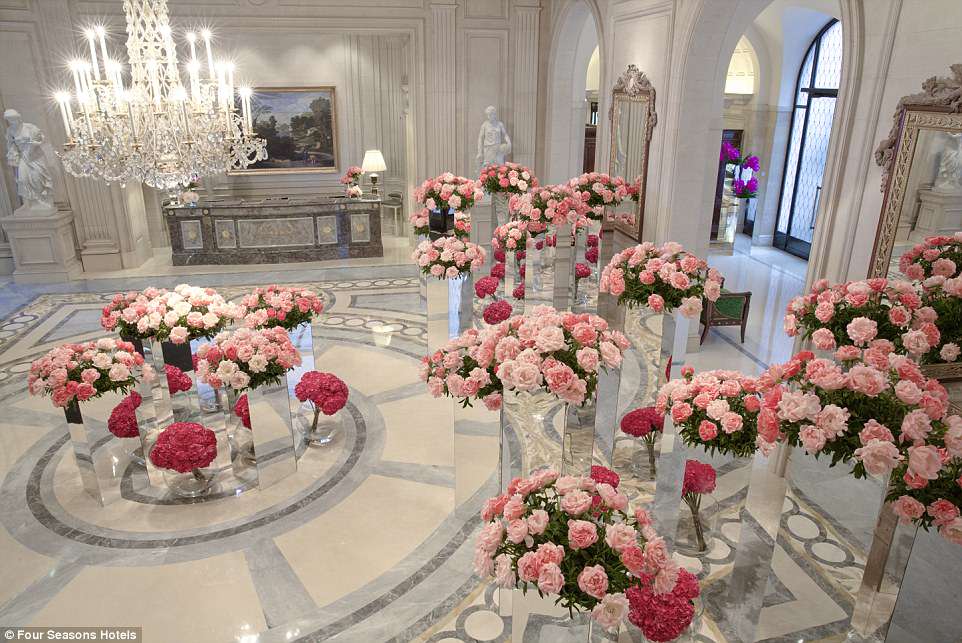 Each week, 12,000 flowers are delivered to the Four Seasons Hotel George V in Paris for decorative purposes

Each week, 12,000 flowers are delivered to the venue for decorative purposes. 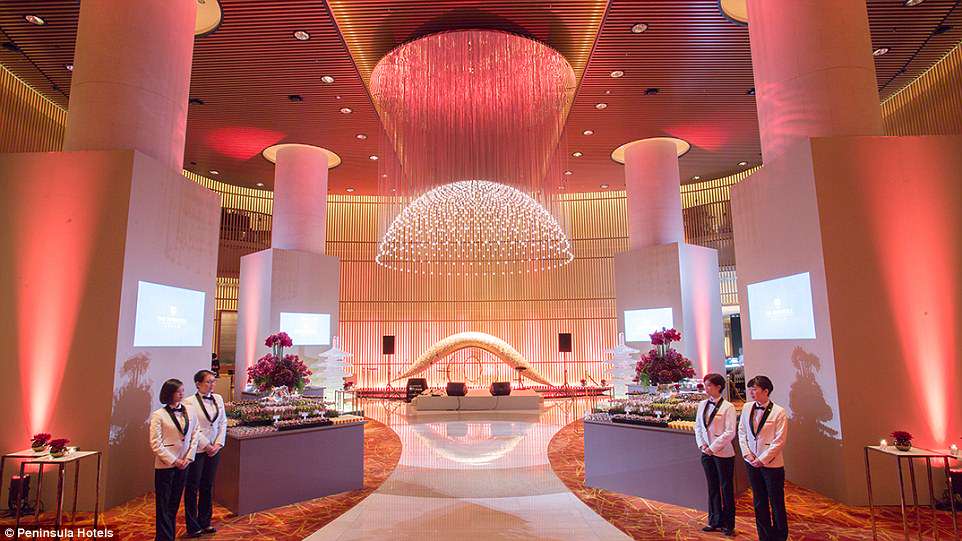 The Peninsula Tokyo is located in the business district of the Japanese capital.

Guests are greeted in the lobby by marble floors, high ceilings and an impressive firework-inspired crystal chandelier. 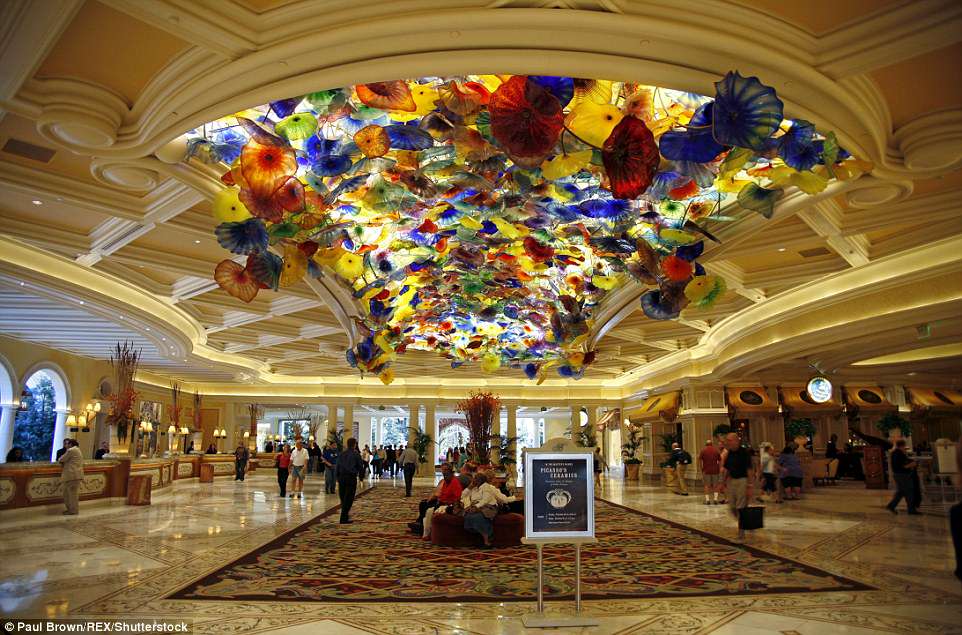 The Bellagio on the Las Vegas Boulevard, has a mesmerising lobby ceiling covered with 2,000 hand-blown glass flowers in a rainbow of hues by sculptor Dale Chihuly.

Aside from its famed fountain and pool, the five-star luxury venue, which also has high-end restaurants and clubs, is known for being inspired by the Lake Como town of Bellagio in Italy.

The elegant hotel boasts an enormous 3,950 rooms, including 512 suites, for the elite to choose from. 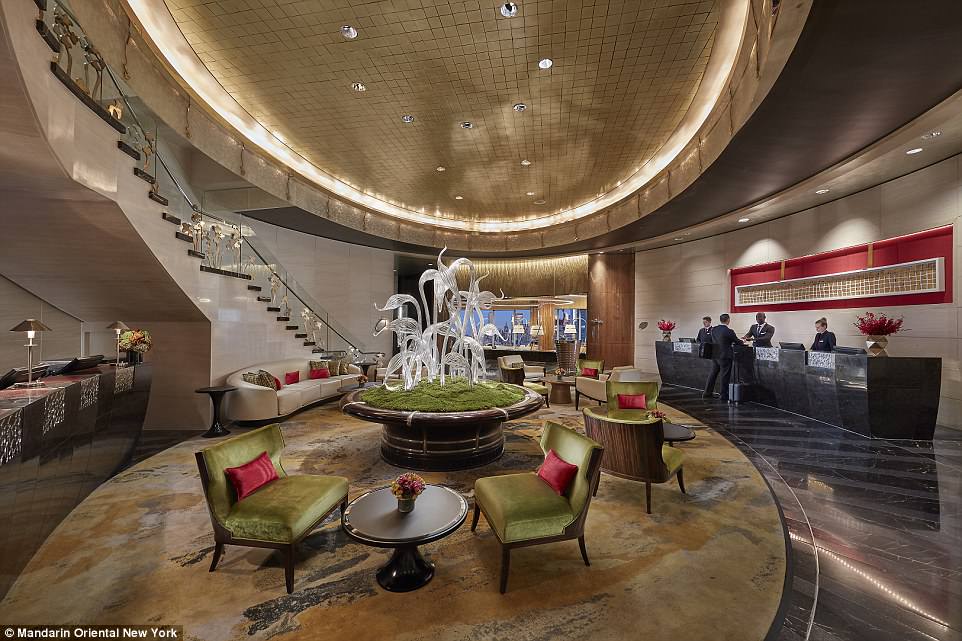 Giant hand-blown glass flowers make for an eye-catching central display in the lobby at the Mandarin Oriental, New York

Offering a bird’s eye view of the city, Mandarin Oriental, New York is a luxury hotel with a five stars.

The lobby on the 35th floor boasts floor-to-ceiling windows looking out over the metropolis. 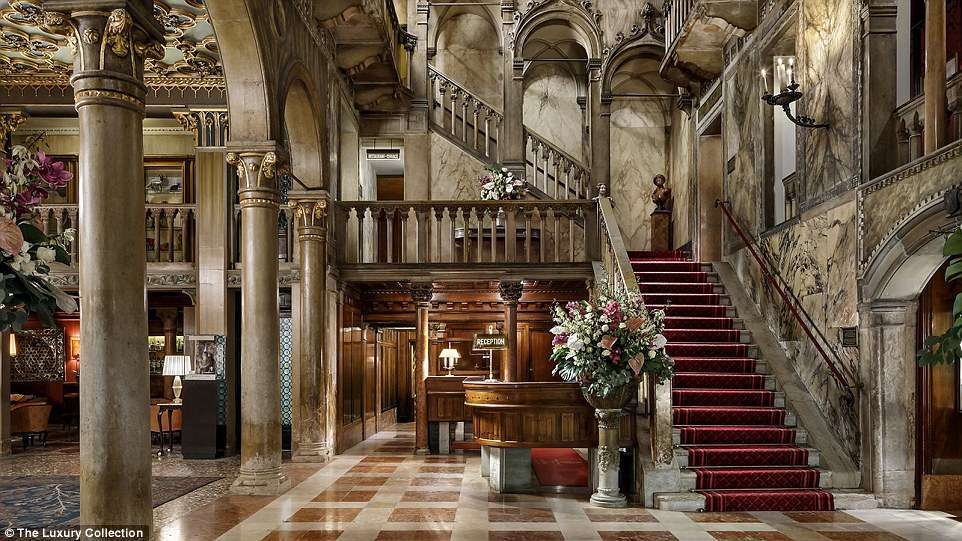 It was built at the end of the 14th century by one of the city’s noble families.

The lobby features a theatrically opulent mix of marble and gold leaf, with the eye drawn to an imposing central staircase. 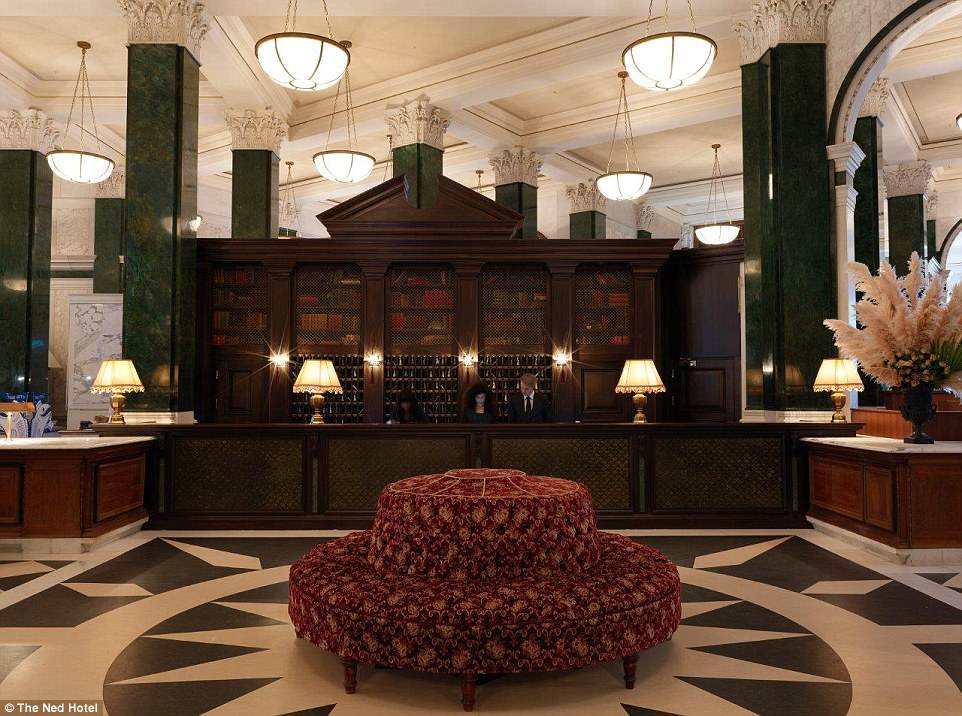 The luxury Ned Hotel is housed in the old Midland Bank headquarters in London.

After an extensive transformation by the Soho House Group and Sydell the stunning complex includes nine restaurants, a spa, 252 bedrooms, a gym and a rooftop pool that overlooks St Paul’s Cathedral.

On walking into the historic building, guests are wowed by a cathedral-like lobby area clad decorated with marble, dark wood panelling and the original ceiling lights. 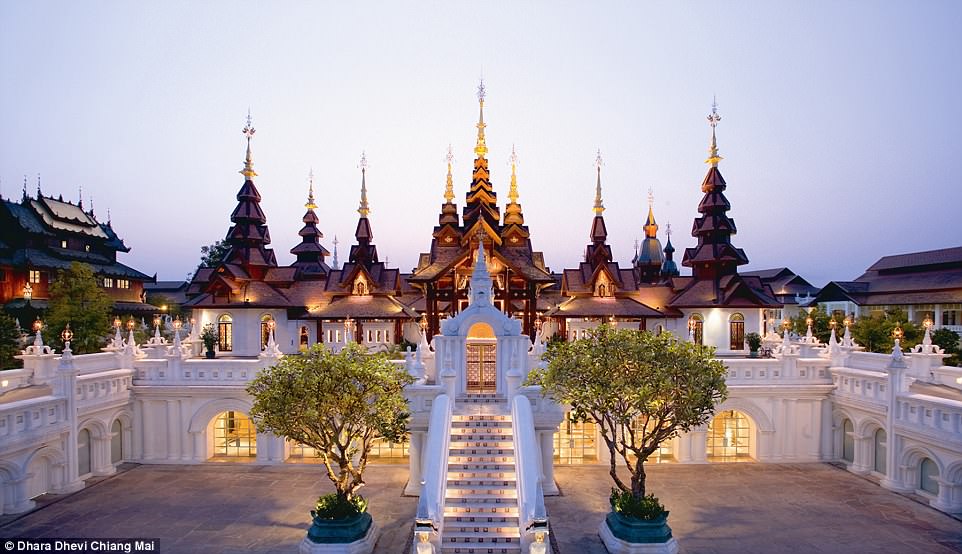 The palace-styled Dhara Dhevi Chiang Mai in Thailand is nestled across 60 acres of landscaped tropical grounds.

All of the buildings are in keeping with traditional architecture and teakwood is a running feature.

The entrance is particularly impressive with guests entering a main courtyard before climbing a grand staircase up to the reception desk. 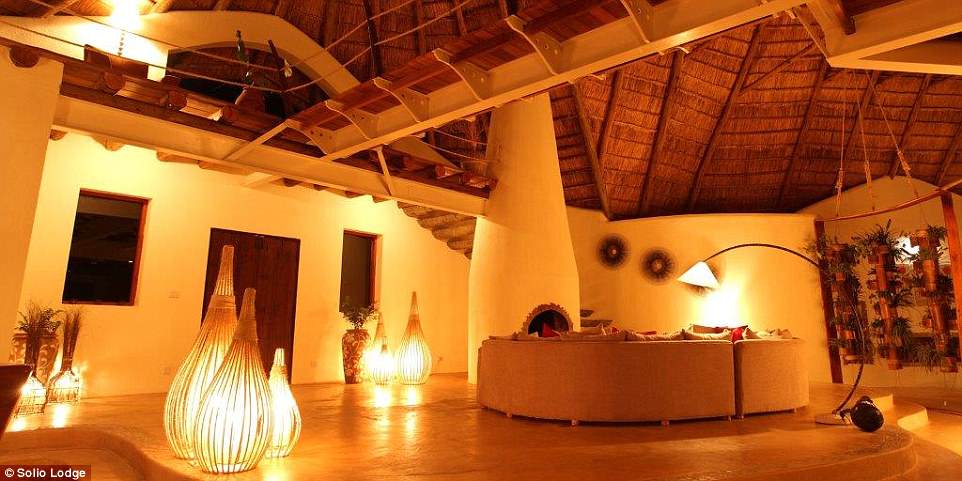 Nestled in the valley between Mount Kenya and the rolling peaks of the Aberdare Mountains lies Solio Lodge.

The main lobby is inside a traditionally-styled building, with a gaping thatched roof, an open fire and artworks from the local area. 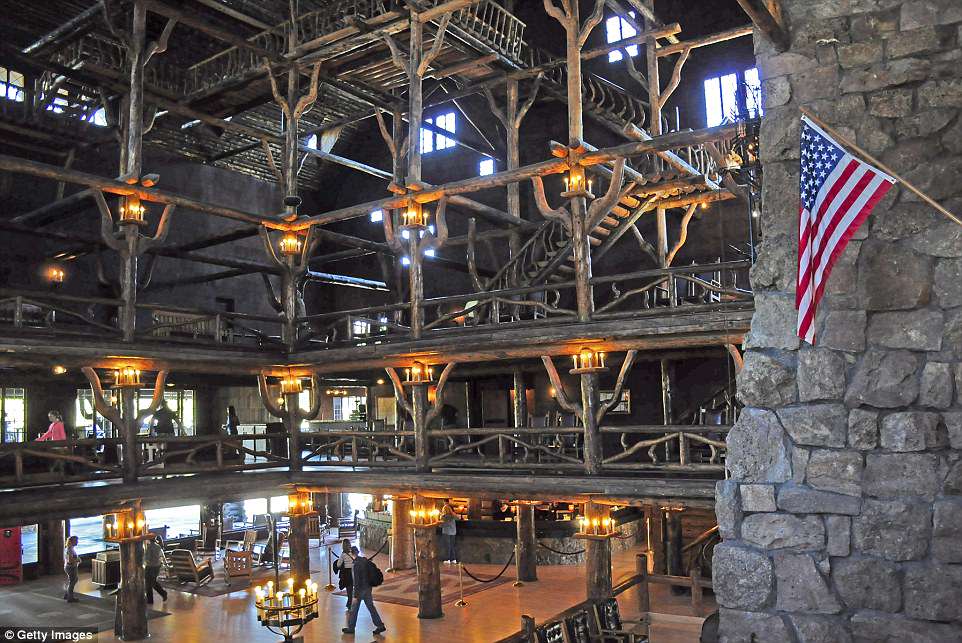 The towering lobby at Old Faithful Inn in Yellowstone features a massive stone fireplace and a hand-crafted clock made of copper, wood and iron

Old Faithful Inn in America’s Yellowstone National Park was built in 1903-1904 with local logs and stone, and is considered the largest log structure in the world.

The towering lobby features a massive stone fireplace and a hand-crafted clock made of copper, wood and iron.

With 327 rooms, the Old Faithful Inn is open from early May until mid-October with amenities including a restaurant, lounge, snack bar and gift shop. 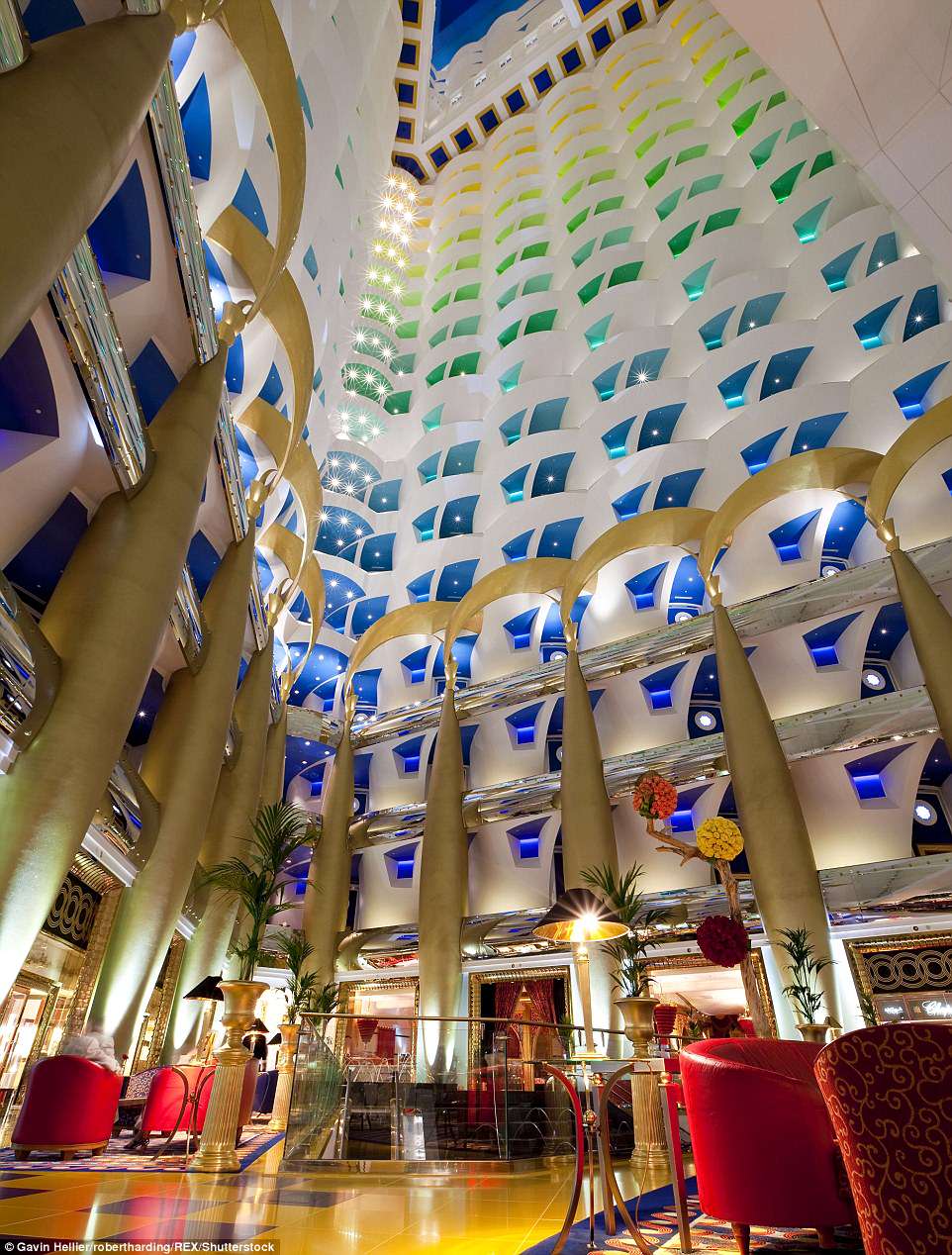 The seven-star Burj Al Arab in Dubai attracts the super-rich and famous, with low-season rates starting at £1,000 per night and running up to £19,500 for the Royal Suite.

In a bid to make its wealthy clients feel at home, the hotel screams opulence, with lashings of gold at every corner.

The lobby area features a sweeping view through the core of the building to the roof, with fountains shooting up and large gold columns standing tall. 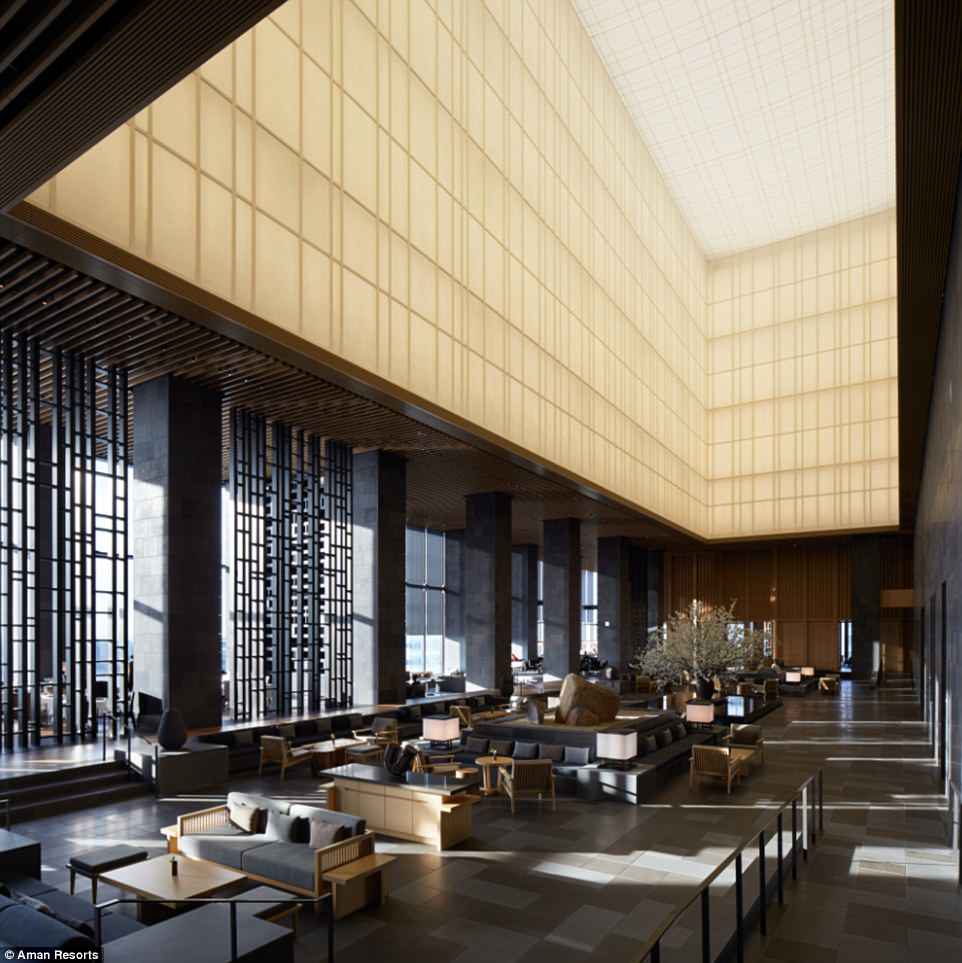 In the lobby of the Aman Tokyo there is a majestic architectural feature soaring almost 100ft high, with the structure resembling the interior of a Japanese paper lantern

Set in the top six floors of a slick high-rise, the luxury Aman Tokyo hotel is nestled in the heart of the city.

In the lobby there is a majestic architectural feature soaring almost 100ft high, with the structure resembling the interior of a Japanese paper lantern.

During the day, it allows sunlight to illuminate the reception, while in the evenings the ambiance evolves via a series of orchestrated lighting scenes. There is also a water feature and rock gardens, to help induce a calming atmosphere.