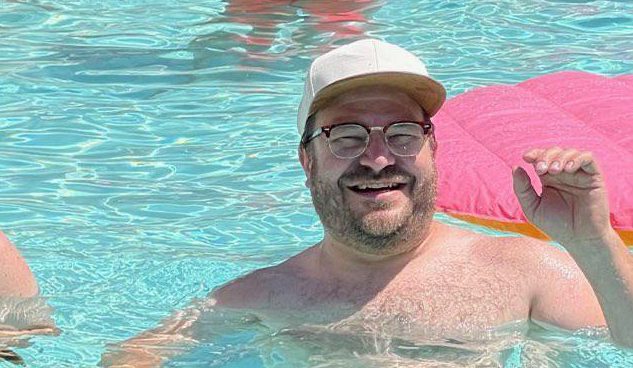 When Sean Douglas McArdle went for a swim in the pool at the Flamingo in Las Vegas, he ran into someone he certainly didn’t expect.

In a post that’s gone viral on Reddit, Sean shared how a group of strangers started pointing and laughing at him as he was swimming.

He started to feel pretty insecure about that, as anyone would, until he noticed that his friends were doing the same thing to somebody else.

That somebody else turned out to be the spitting image of Sean, even down to the cap and horn-rimmed glasses they were both wearing.

In his r/funny post, Sean wrote: ‘I wasn’t convinced until now… we are definitely in a simulation.

‘Today I randomly swam past my doppelgänger at the Flamingo pool in Vegas.’

Sean also shared a photo, and it’s undeniable – the resemblance between him and this other man is uncanny.

When asked what he thought when he first laid eyes on his doppelgänger, Sean replied: ‘I immediately thought: “Holy sh*t that guy looks like the dude I see in the mirror.” And my second thought was: “He looks cooler than me. Probably has real Club Master Ray Bans unlike my Zenni knock-offs.”’

The comments on the post, which has earned a whopping 95,500 upvotes so far, are full of people joking about how stark the similarities between the two are.

One person wrote: ‘You’re not supposed to fight to the death when you see your doppelgänger? …Sh*t’

When asked whether the two sound the same, Sean replied: ‘His voice sounded like a recording, nothing at all like mine.’

In the most upvoted comment on the post, another person joked: ‘There are three of you guys at every brewery.’