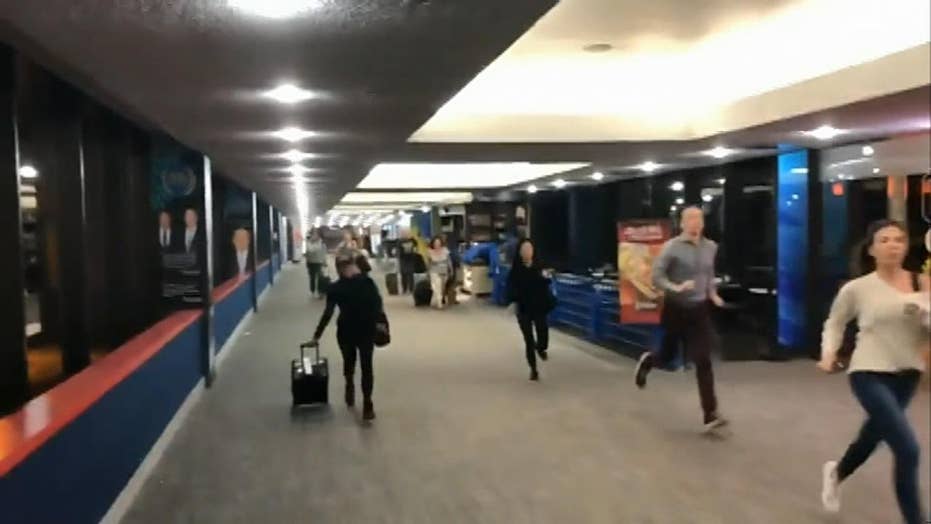 Chaos broke out as Terminal A at Newark Liberty International Airport was evacuated Monday evening over an active shooter scare.

Two Alaska Airlines passengers have come forward to claim that the active shooter scare at Terminal A at Newark Liberty International Airport on Monday night began with an airline employee racially profiling them with bizarre questions about their Asian heritage.

"Are you scared? Are you nervous?" the unnamed Alaska staffer allegedly asked Chunyi Luo after randomly approaching him near Gate 30, BuzzFeed News reports.

"Why are you acting suspiciously?" she soon questioned Han Han Xue, who was standing nearby.

Both Chinese-born men, who were strangers, told BuzzFeed that the woman physically came too close for comfort, reportedly "pushing past" Xue and standing "too close" to Luo.

According to Xue, the Alaska employee’s questions became increasingly strange.

Luo added that he heard the woman say “Asian” around this time.

Uncomfortable, Xue said he walked away to join the other passengers boarding the flight in hopes of shaking the staffer off – but the airline employee followed him.

"I'm onto you guys. The cops are already called,” she allegedly said.

The Alaska Airlines employee then approached her coworkers, who did not feel feel the men were behaving strangely. Moments later, she sounded an alarm throughout the terminal and began to yell for everyone to evacuate. Terrified, many passengers believed there was an active shooter or a bomb threat.

It has since come to light that the Alaska Airlines employee reportedly has bipolar disorder, which may have contributed to her unusual behavior. According to CBS2, sources have said she had an issue with her medication.

Around 200 passengers scattered onto the airport’s tarmac, with many leaving their bags behind.

At present, it remains unclear if the Alaska employee was released or charged. However, sources told CBS2 the woman will likely not be charged because of her reported mental health condition.

The two men were questioned by the Port Authority Police Department and found to have done nothing wrong and released.

Reps for the carrier were not immediately available to comment on the story.