These pictures are sure to leave you starry-eyed.

They have been snapped by German photographer Alex Forst, who has made taking magical pictures of star-filled night skies over stunning landscapes something of a speciality.

The amateur photographer, who now lives in Walchwil, Switzerland, says his love of science fiction is what inspired him to start capturing starry scenes.

He told MailOnline Travel: ‘I love starships and stars and it was a big dream when I was a child to travel to the stars one day. I don’t think that will happen for me in this lifetime. So instead, I shoot them with my camera, which allows me to see more of space than I could ever see with my own eyes.’

In order to capture pin-sharp images, Alex uses a star tracker. These allow for long exposures, needed to collect as much light as possible from what are obviously dim sources. Without one, stars will appear with a light trail, because they are in a fixed position, but the earth is rotating. Star trackers automatically rotate the camera to keep it focussed on the same spot. He also blends images of the same spot in the editing process to bring the Milky Way out in all its star-studded glory.

He added: ‘I like it when people feel an emotion or start to dream when they see my shots. If this happens, I know I did a good job.’ Scroll down – and prepare to be dazzled… 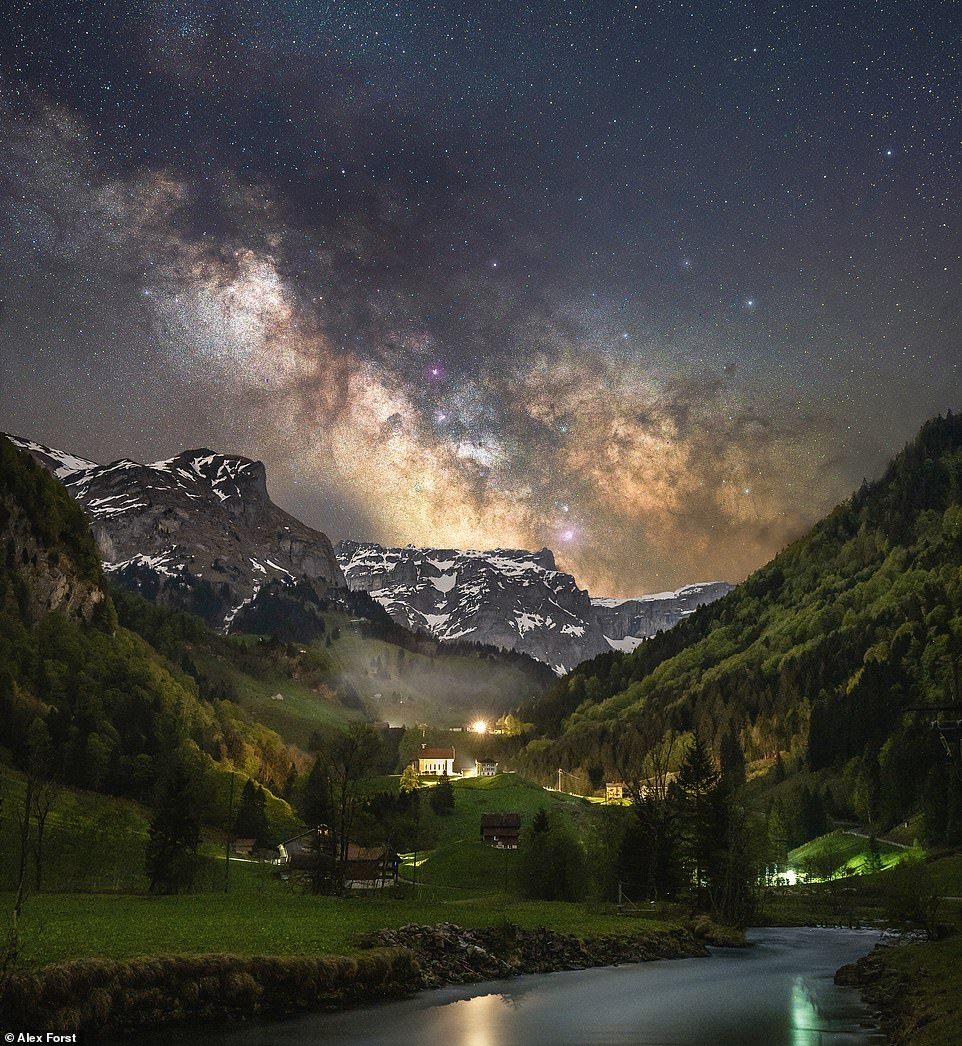 Alex says his love of science fiction inspired him to start taking pictures of the night sky. This image was captured in the Swiss settlement of Bisisthal 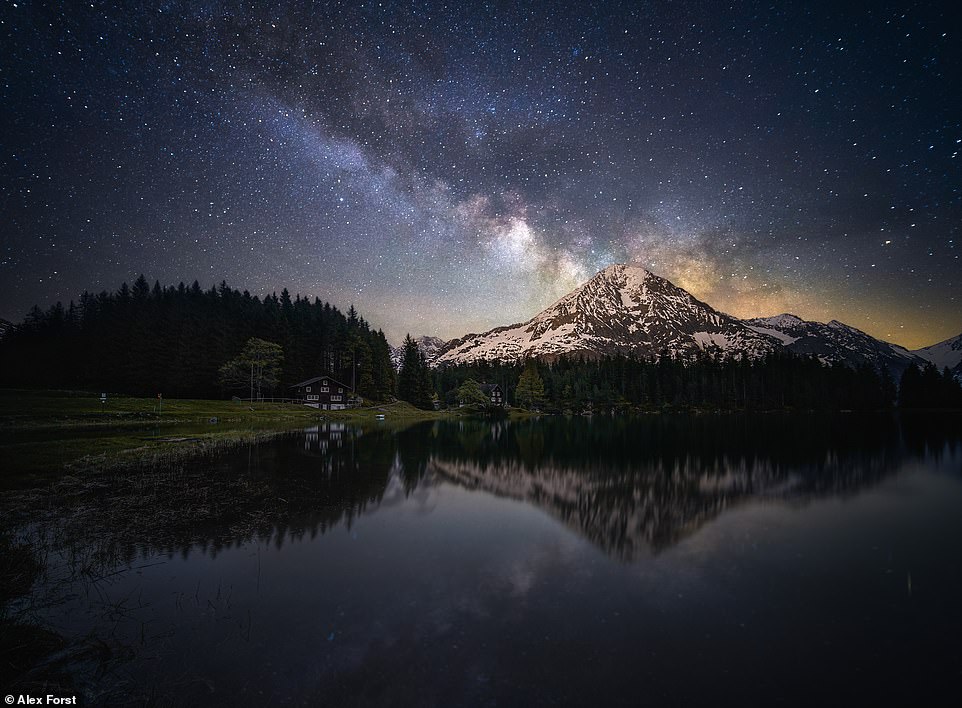 This stunning shot shows Arnisee, a beautiful reservoir in the centre of Switzerland 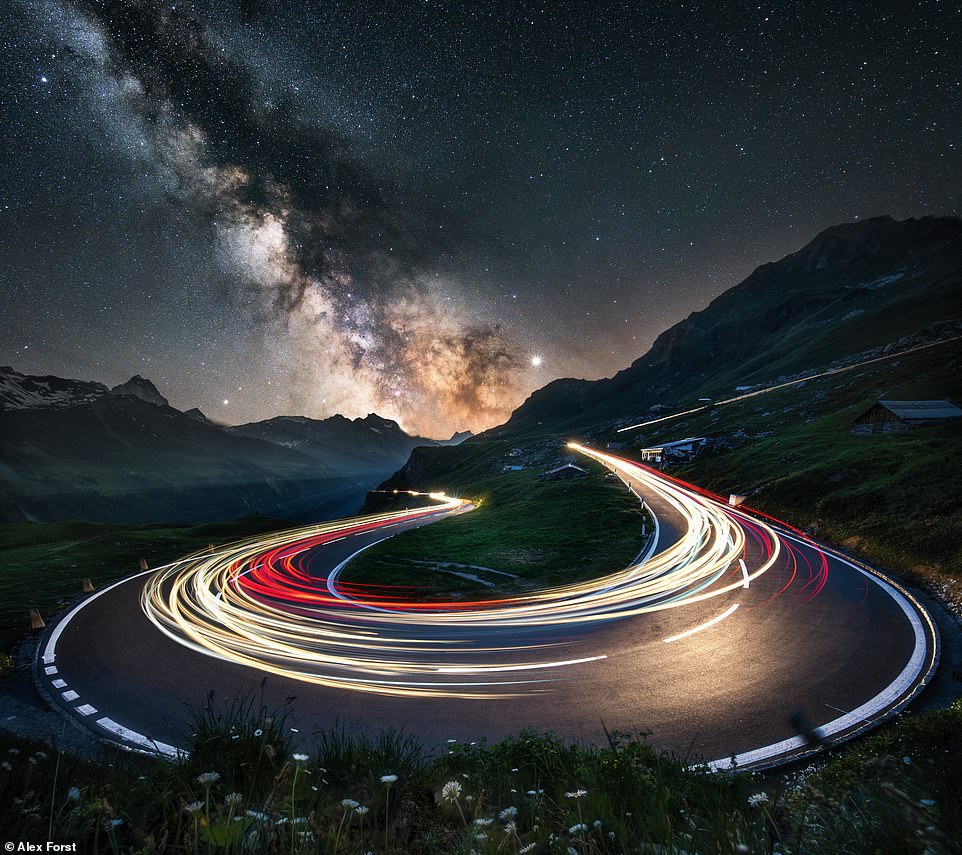 Alex said: ‘When I was a child, I wanted to travel to the stars one day. I don’t think that will happen for me in this lifetime so instead, I shoot them with my camera.’ This image shows the Klausen Pass in Switzerland 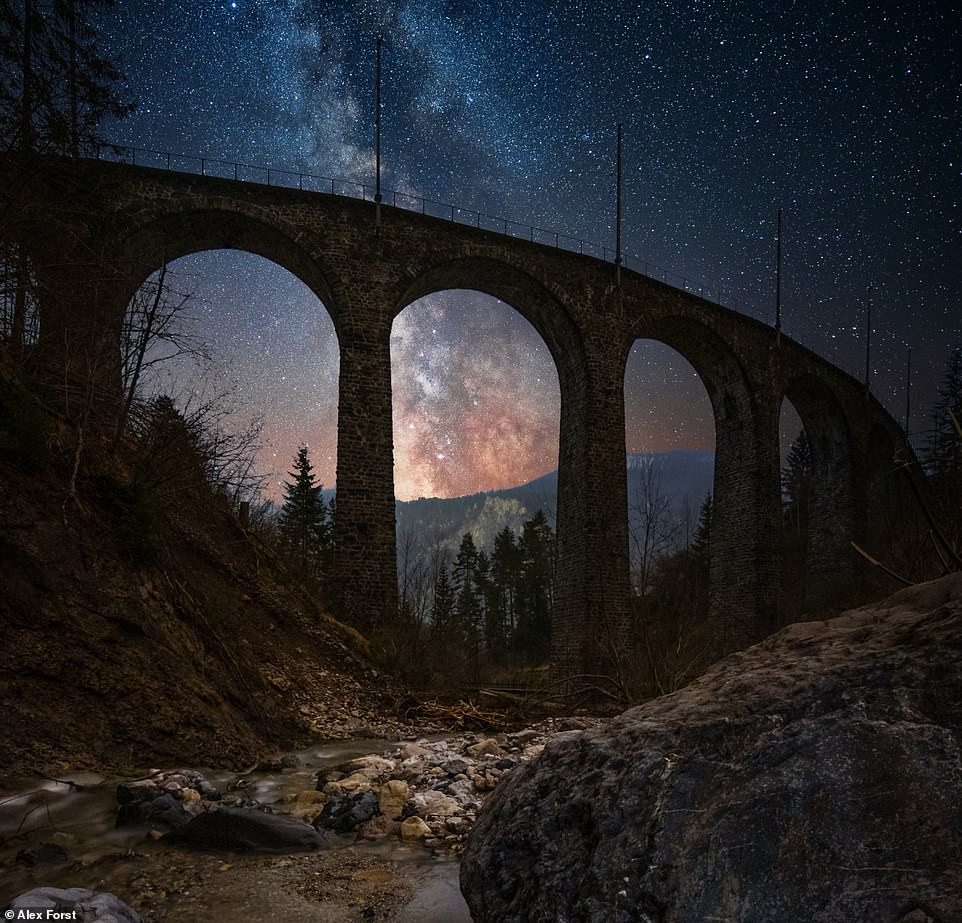 This amazing image shows stars twinkling above the Landwasser Viaduct, a 213ft (65-metre) high railway crossing in the Swiss canton of Graubünden 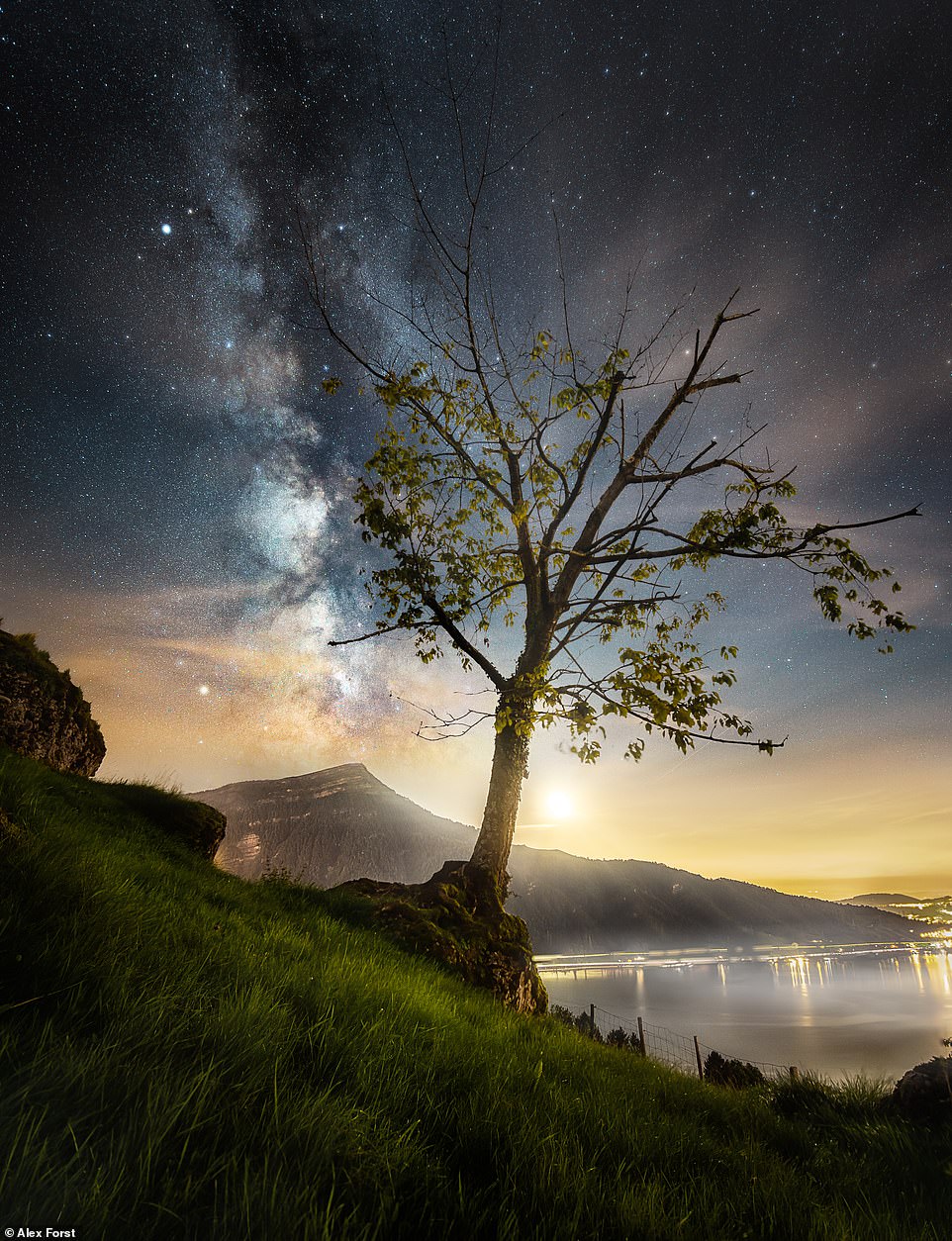 Alex says his favourite aspect of the night sky is the Milky Way and its giant gas and dust clouds, called nebulas. This image was shot in the village of Walchwil, Switzerland 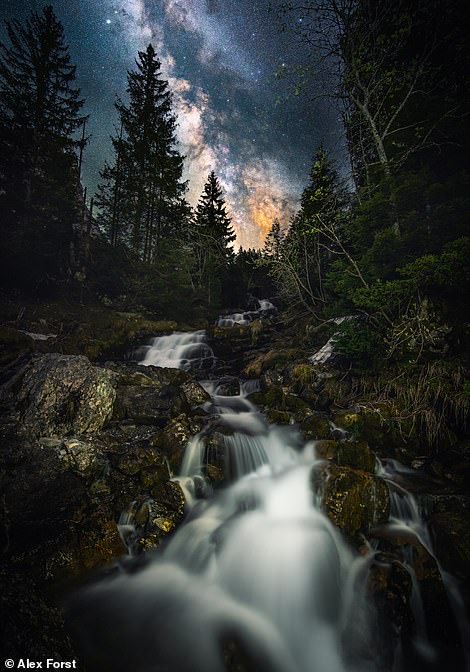 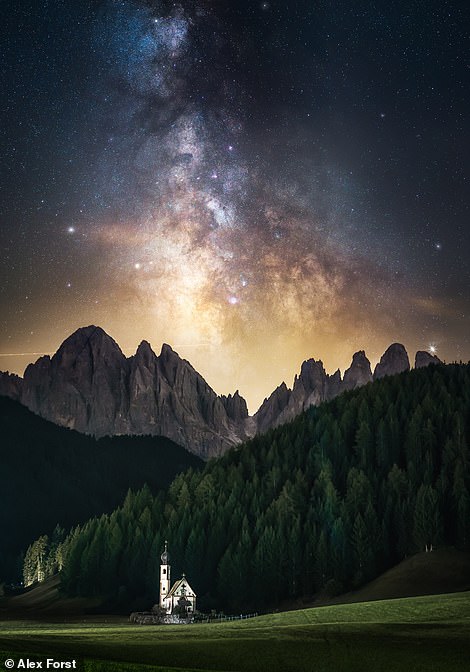 Alex says he only started taking his photography hobby seriously around three years ago. Pictured left is Bisisthal and on the right is a starry scene in the Italian Dolomites 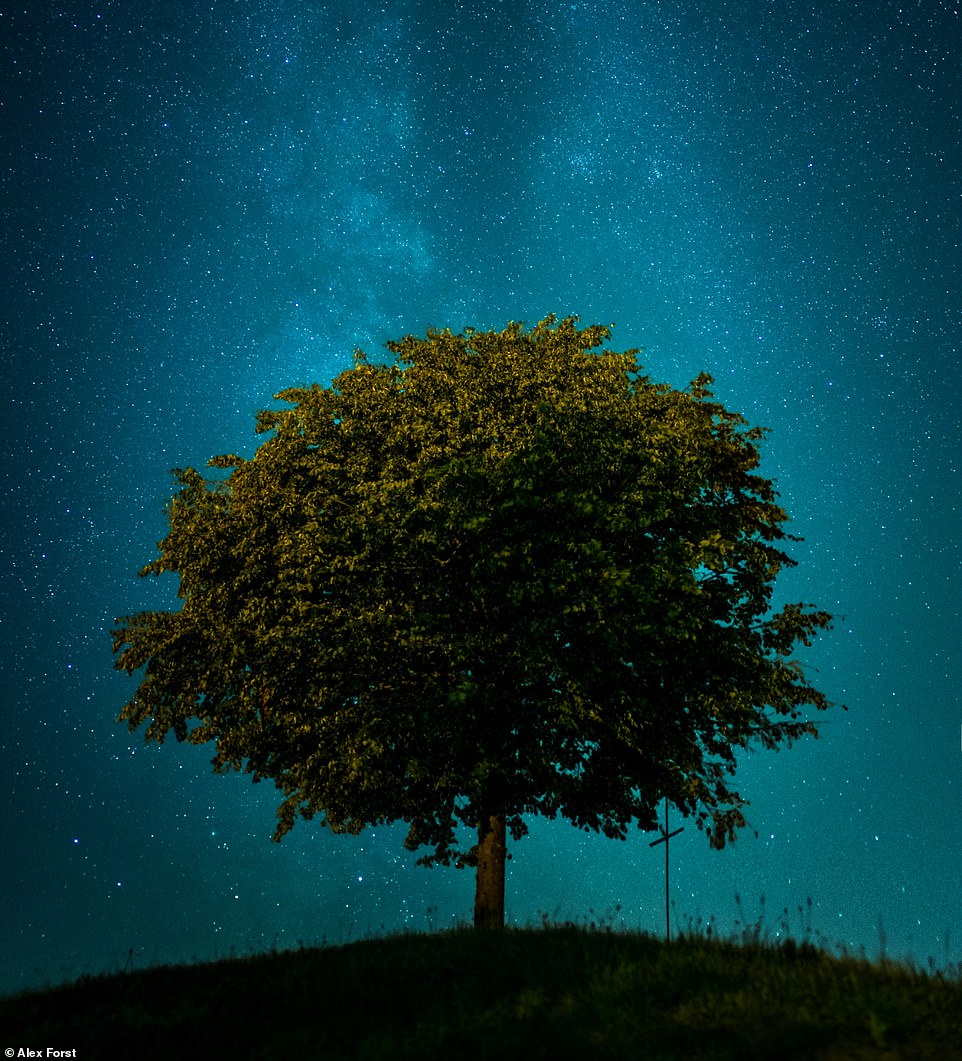 Alex now lives in Switzerland and says it is an ‘amazing country to shoot the night sky’. This image was snapped in the Swiss town of Hirzel 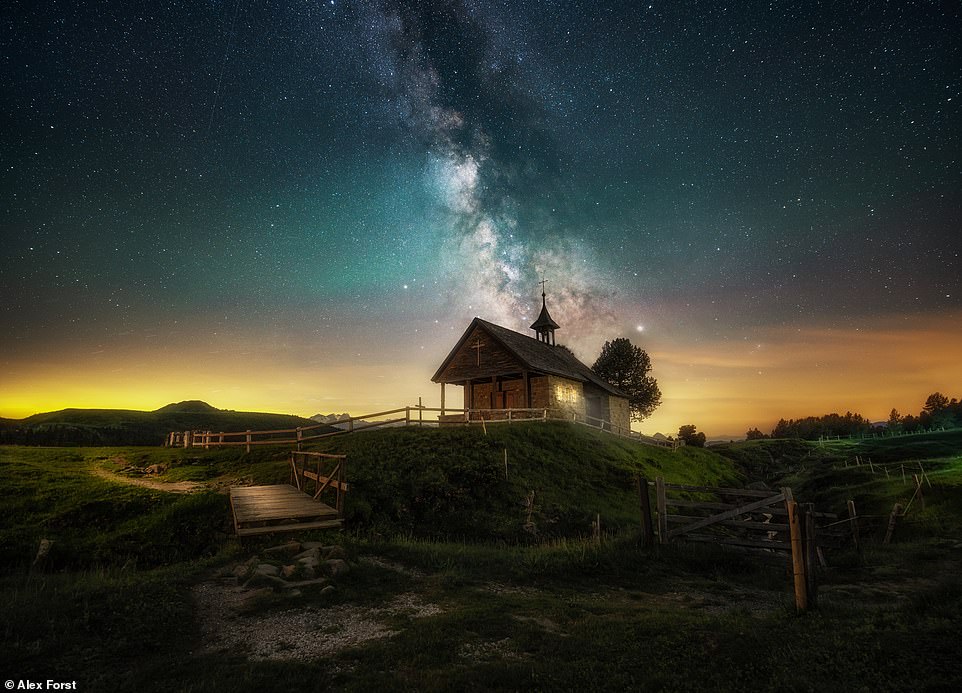 Alex captured this serene scene in Switzerland. He said: ‘I like when people get an emotion or start to dream when they see my shots’ 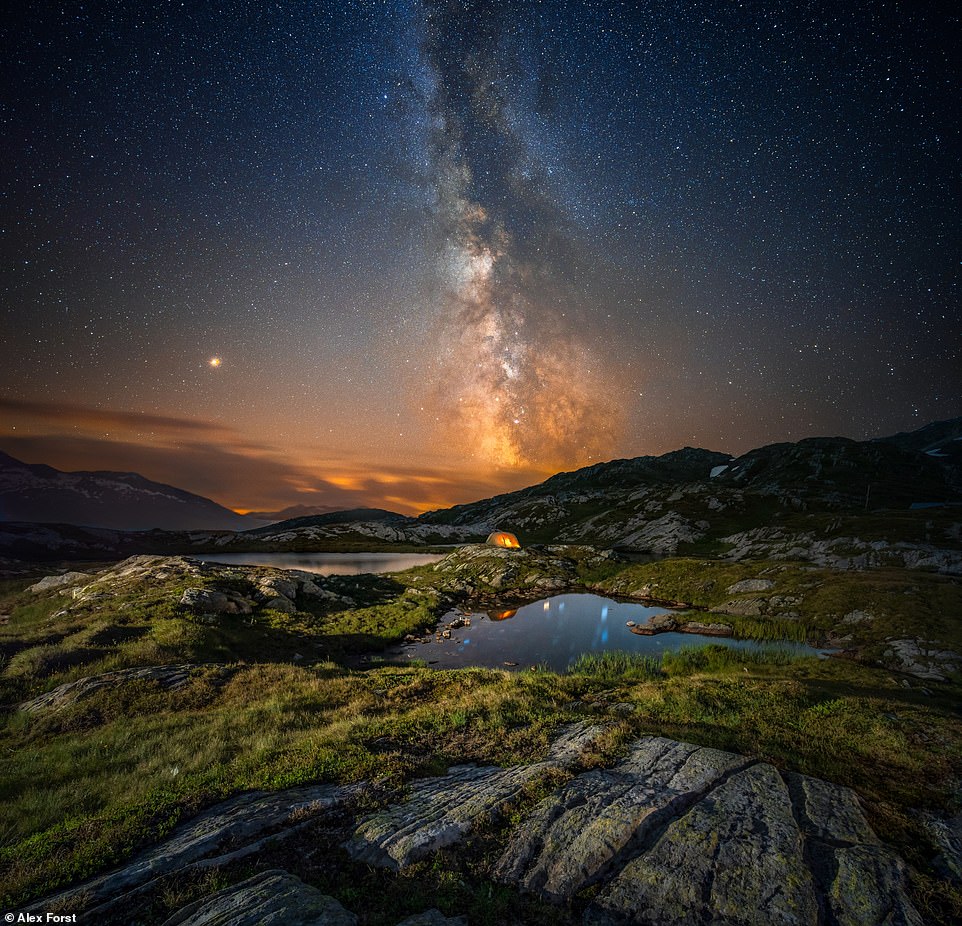 This otherworldly shot was taken near the Grimsel Pass, a mountain pass in Switzerland that crosses the Bernese Alps at an elevation of 7,100ft (2,164 metres) 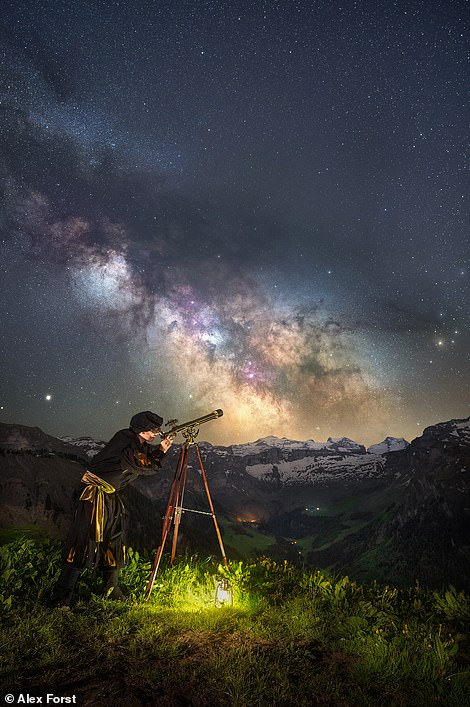 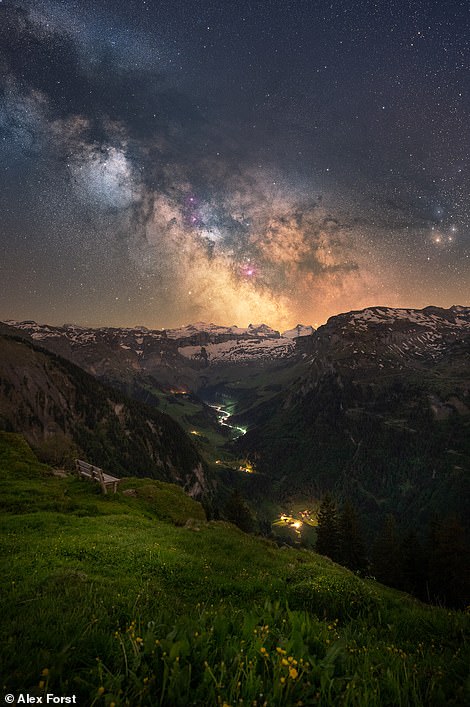 Alex said: ‘I like it when my pictures hit the imagination of someone else. If this happens, I know I did a good job.’ Both images, left and right, were snapped in the Swiss canton of Schwytz 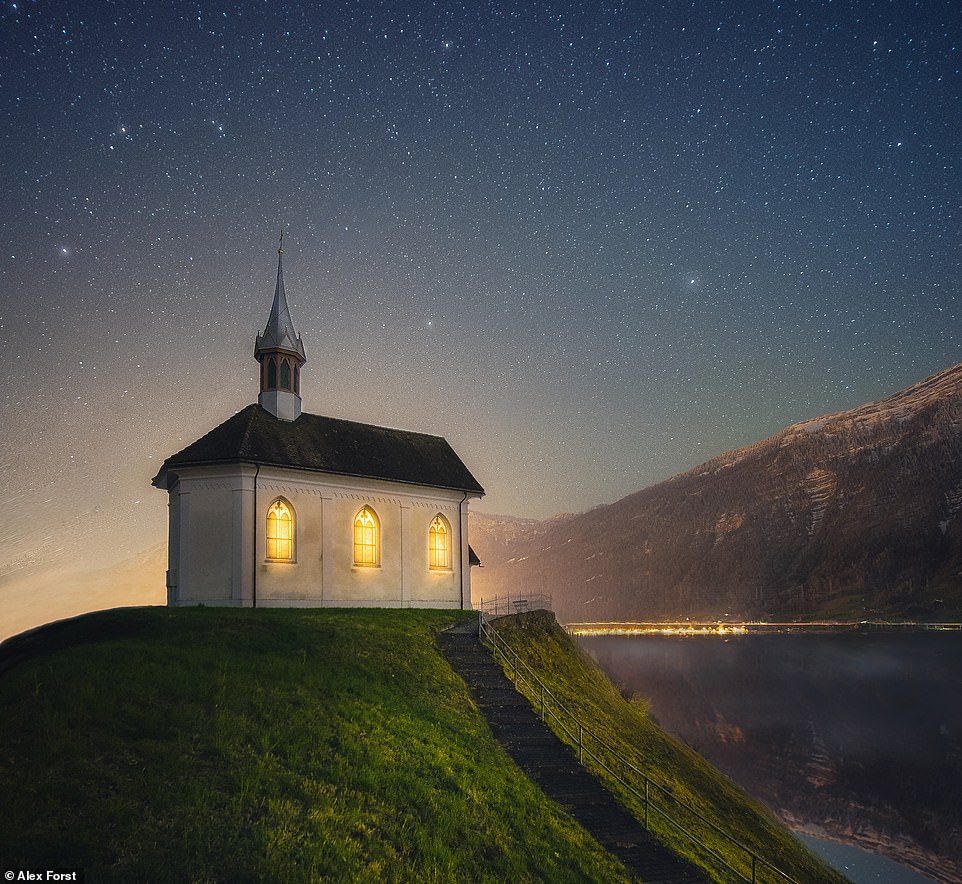 Alex moved from the German capital Berlin to Walchwill in Switzerland over six years ago. This is where he shot this stunning picture 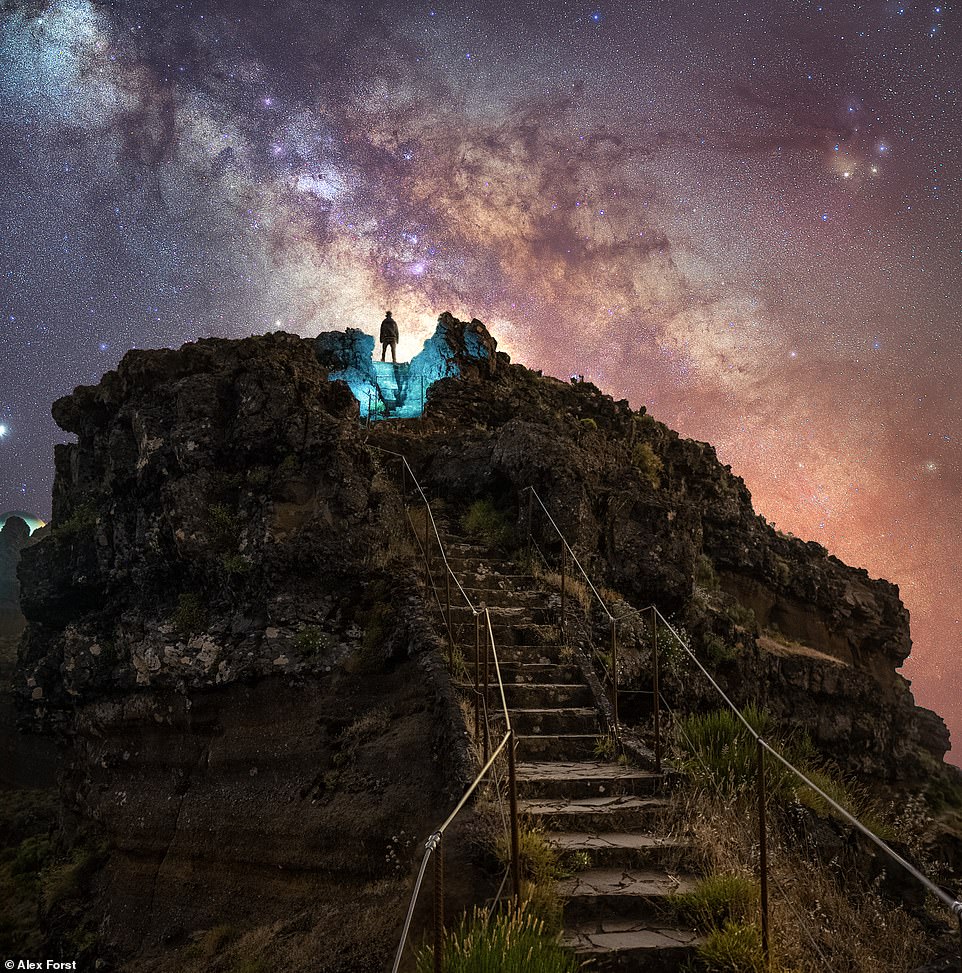 This picture was taken on Pico do Arieiro – the third-highest peak on the Portuguese island of Madeira. It stands at 5,964ft (1,818m) 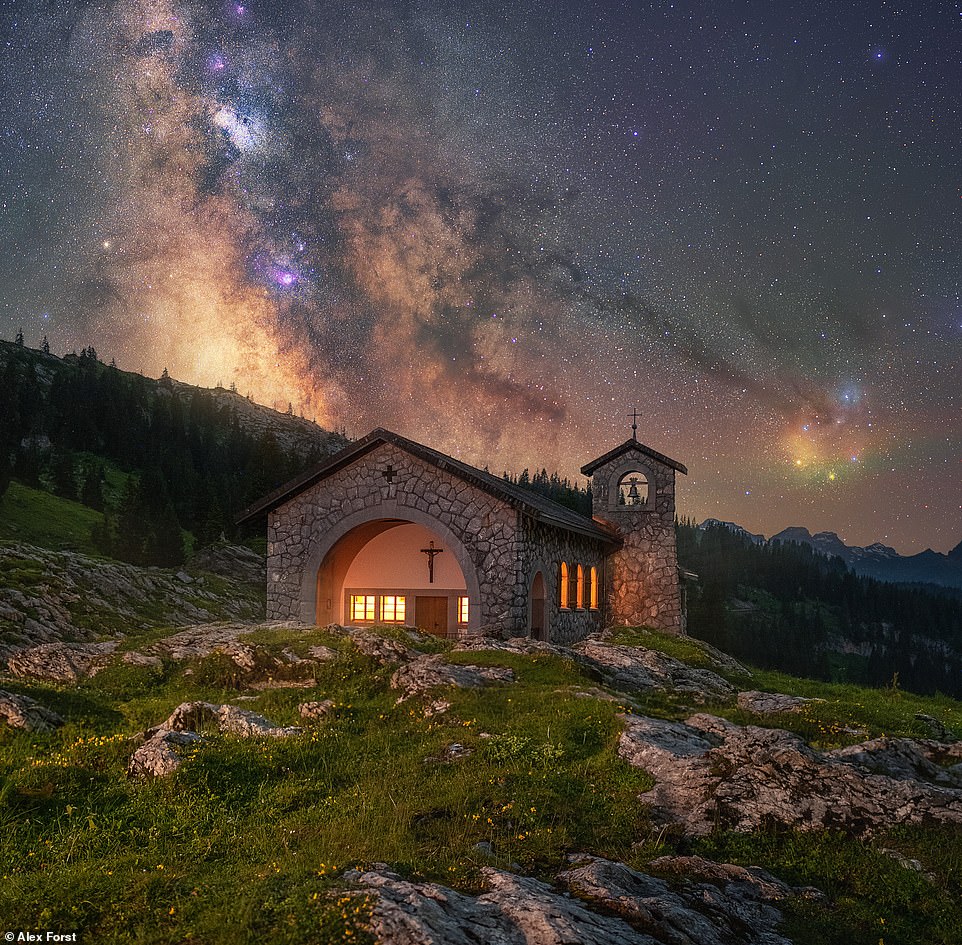 Alex captured this star-filled night sky above a small chapel in Pragelpass, Switzerland 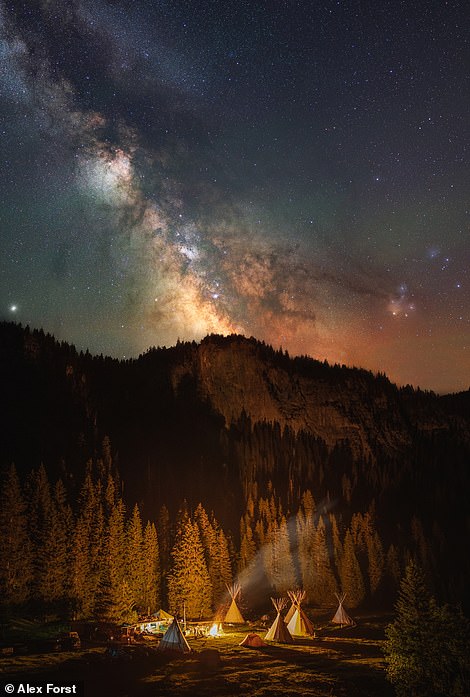 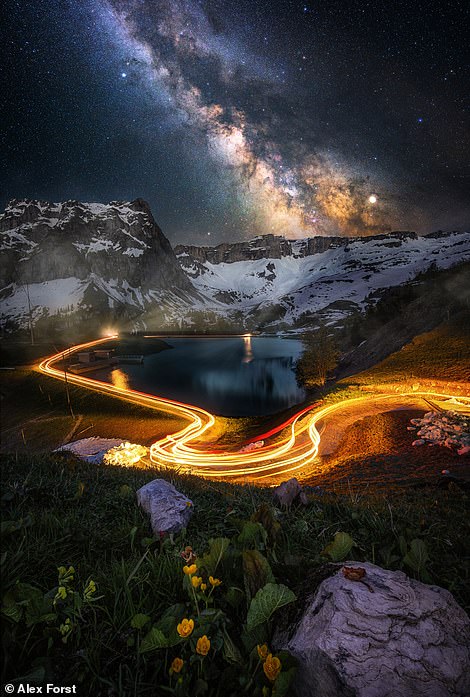 Alex doesn’t have a favourite picture, and explained: ‘My favourite picture is probably the next picture I will do.’ Pictured right is Seebergsee, a lake in the Canton of Berne. On the left is a campsite in Bisisthal 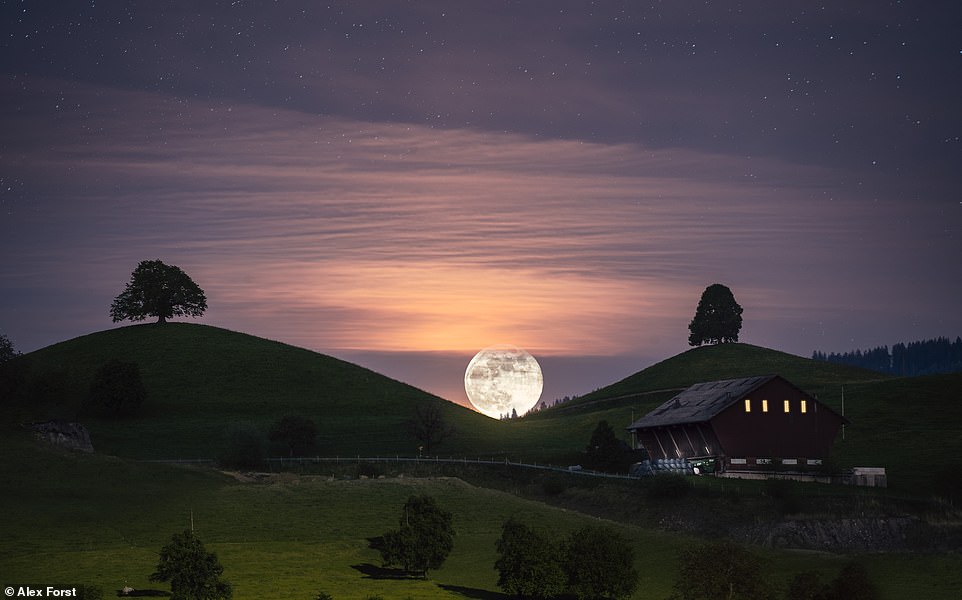 In order to create his pin-sharp photos, Alex has to employ stacking, tracking and blending techniques. Pictured is a scene across Hirzel in Switzerland 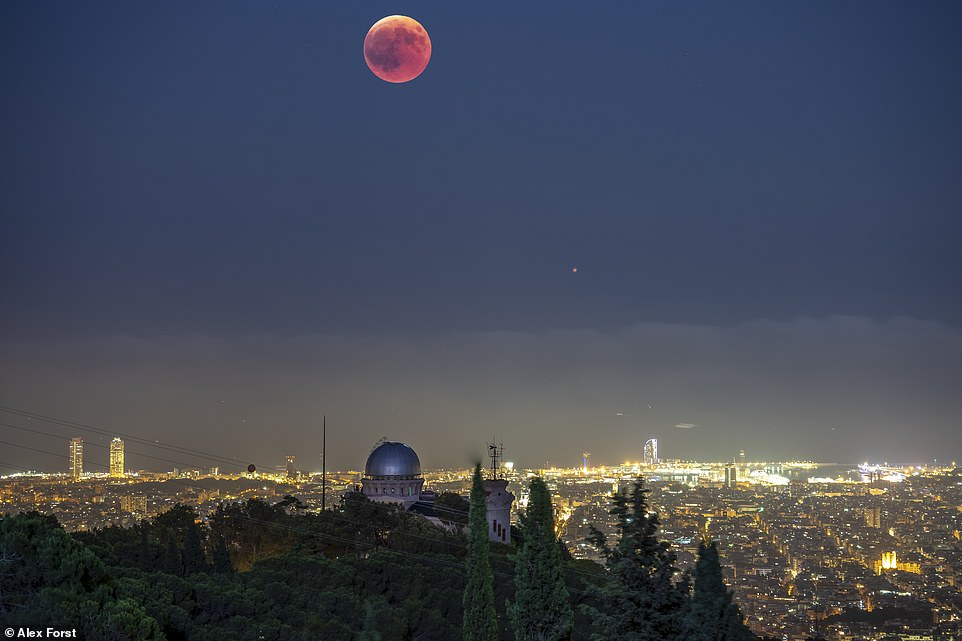 This breathtaking image, which features a ‘blood moon’ in a lunar eclipse, was snapped by Alex in Barcelona 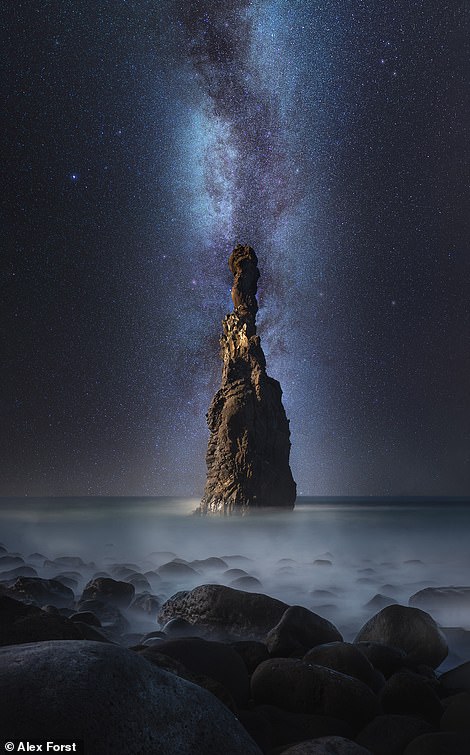 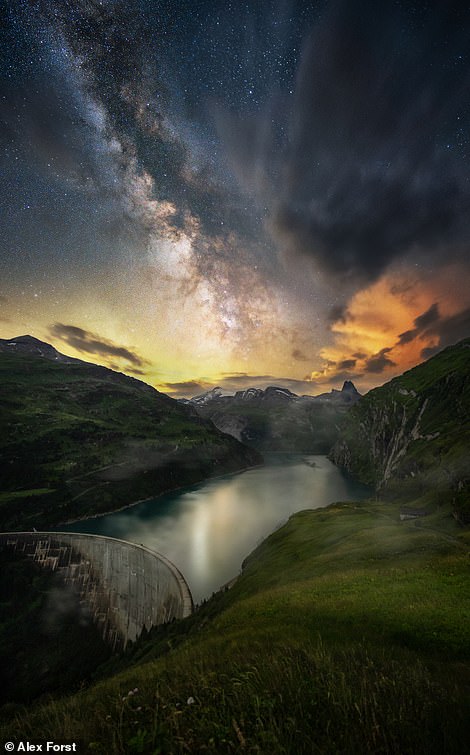 Pictured left is a scene Alex recently captured off the coast of village Ribeira da Janela in Madeira, where he recently went on holiday. On the right is a dramatic image he snapped in the mountain village of Vals, Switzerland 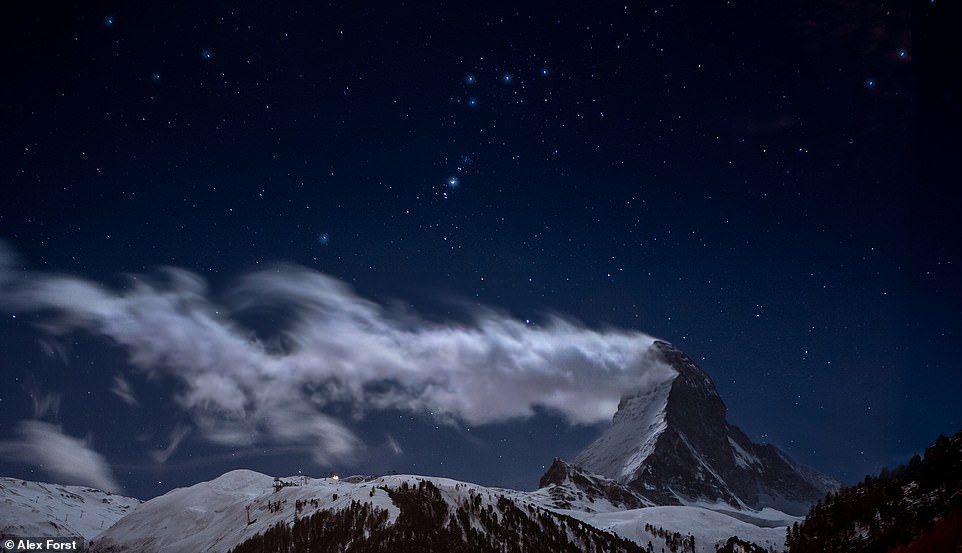 This magical scene shows one of Europe’s most famous peaks – the 14,691ft-high Matterhorn, with clouds swirling ethereally from its summit 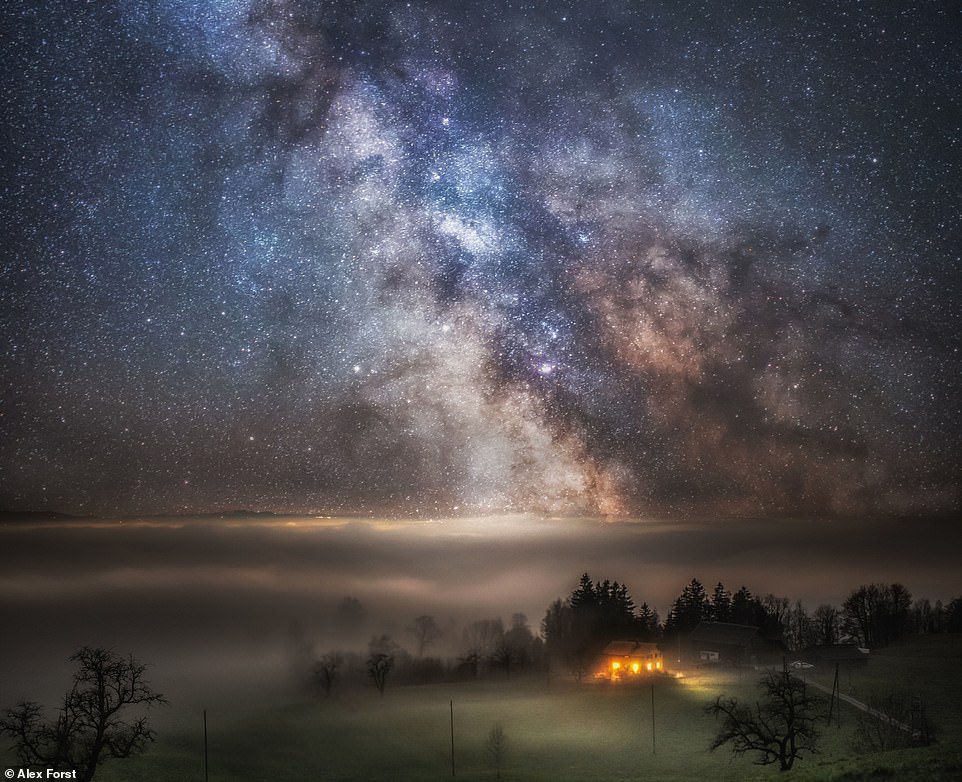 Alex’s interest in photography stepped up when he joined a group on Facebook that specialises in night shots. He said: ‘I saw the shots of the Milky Way and just thought “are these real?”‘ Pictured is Walchwil, Switzerland 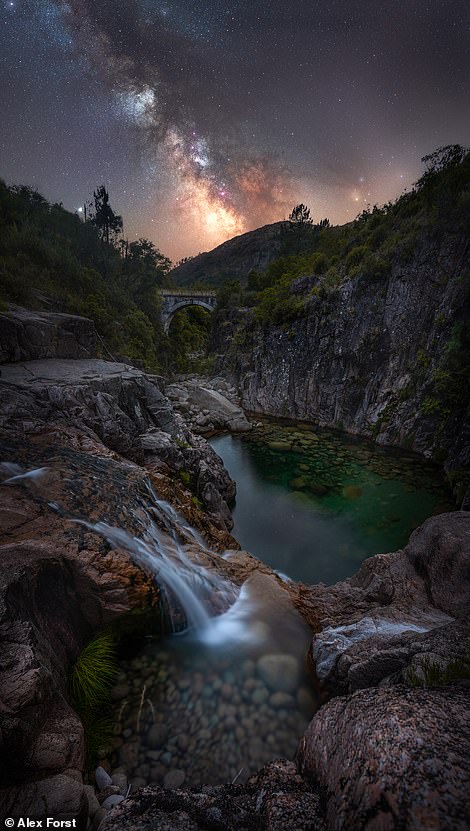 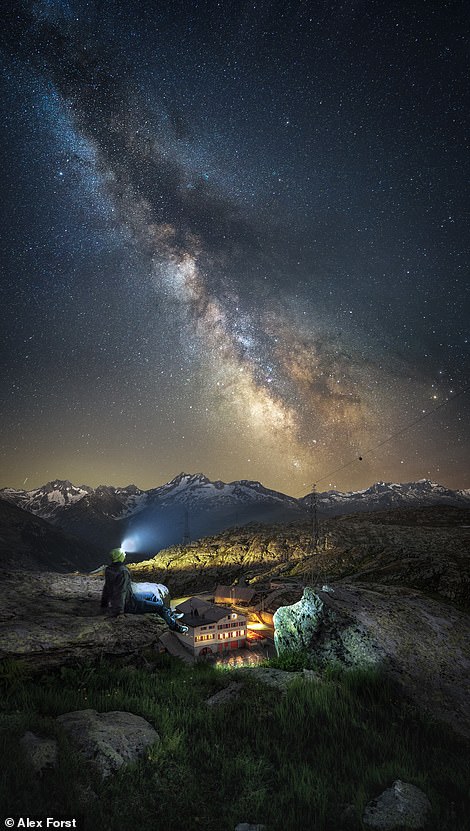 On the left is an amazing image that Alex snapped in a Portuguese national park. On the right is a snap taken on the Grimsel Pass 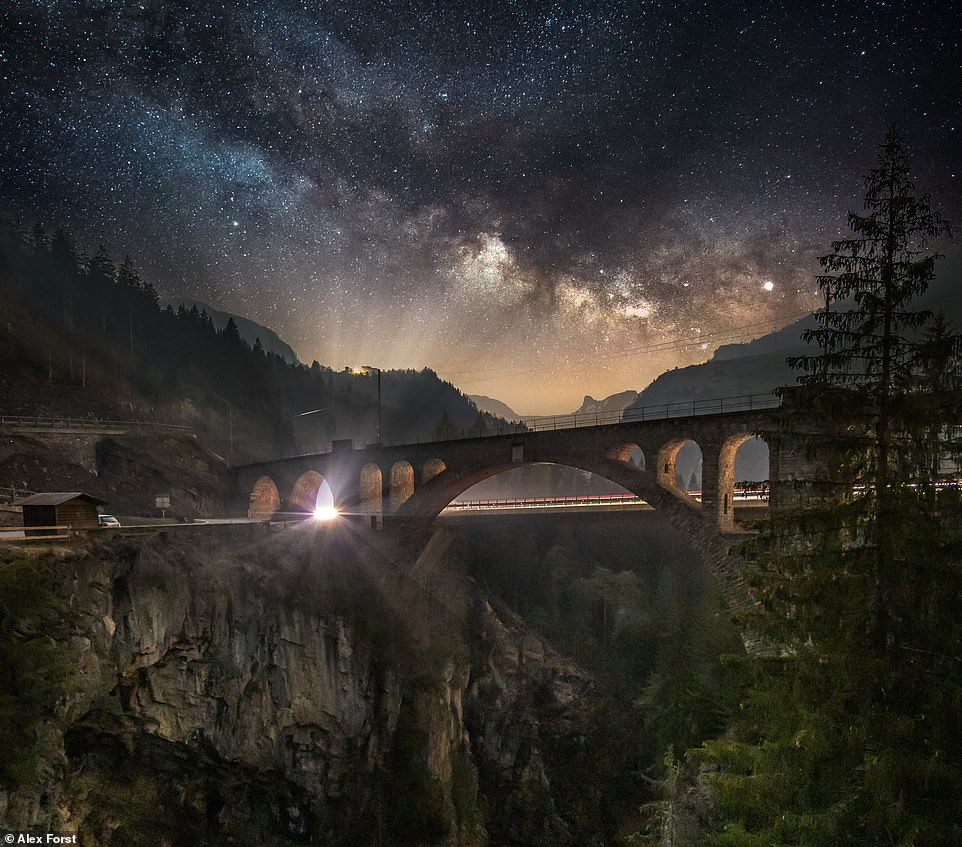 In order to capture his images, Alex uses a star tracker. These allow for very long exposures, needed to collect as much light as possible from what are obviously dim sources. Without one, stars will appear with a light trail, because they are in a fixed position, but the earth is rotating. Star trackers automatically rotate the camera to keep it focussed on the same spot. This image was shot in Graubünden, Switzerland 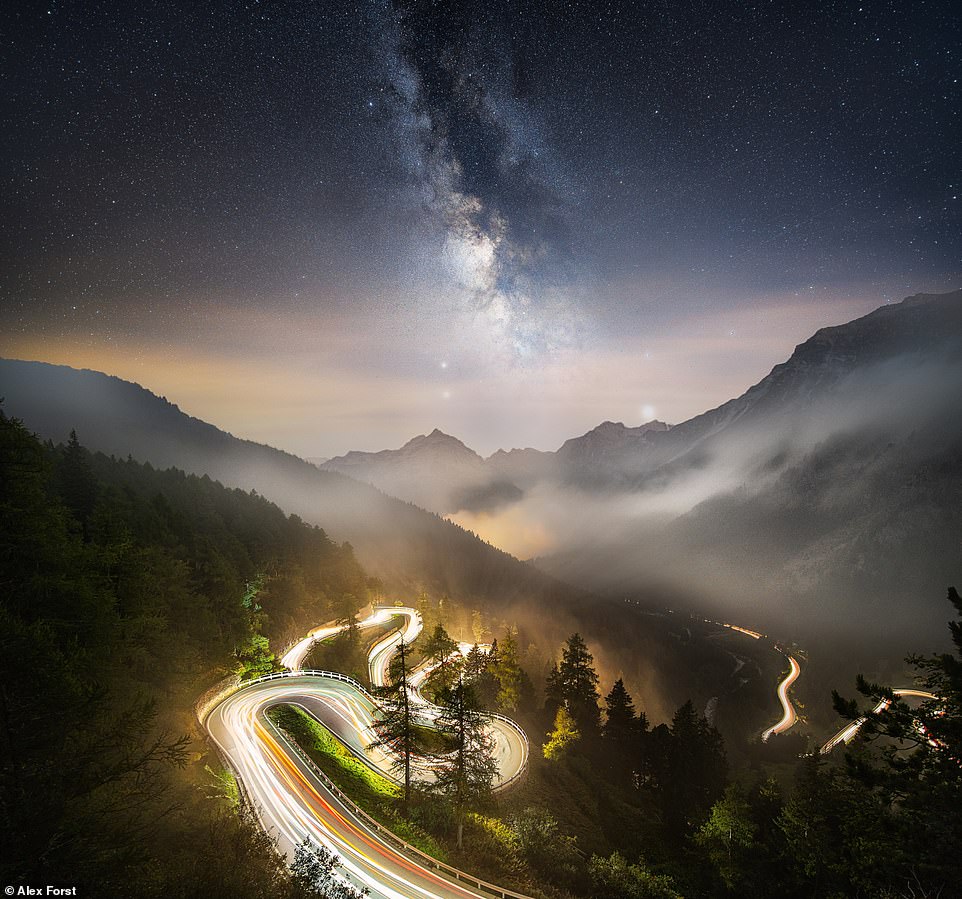 The winding roads at the Maloja Pass in the Swiss Alps, which reaches a peak elevation of 5,955 ft (1,815m) 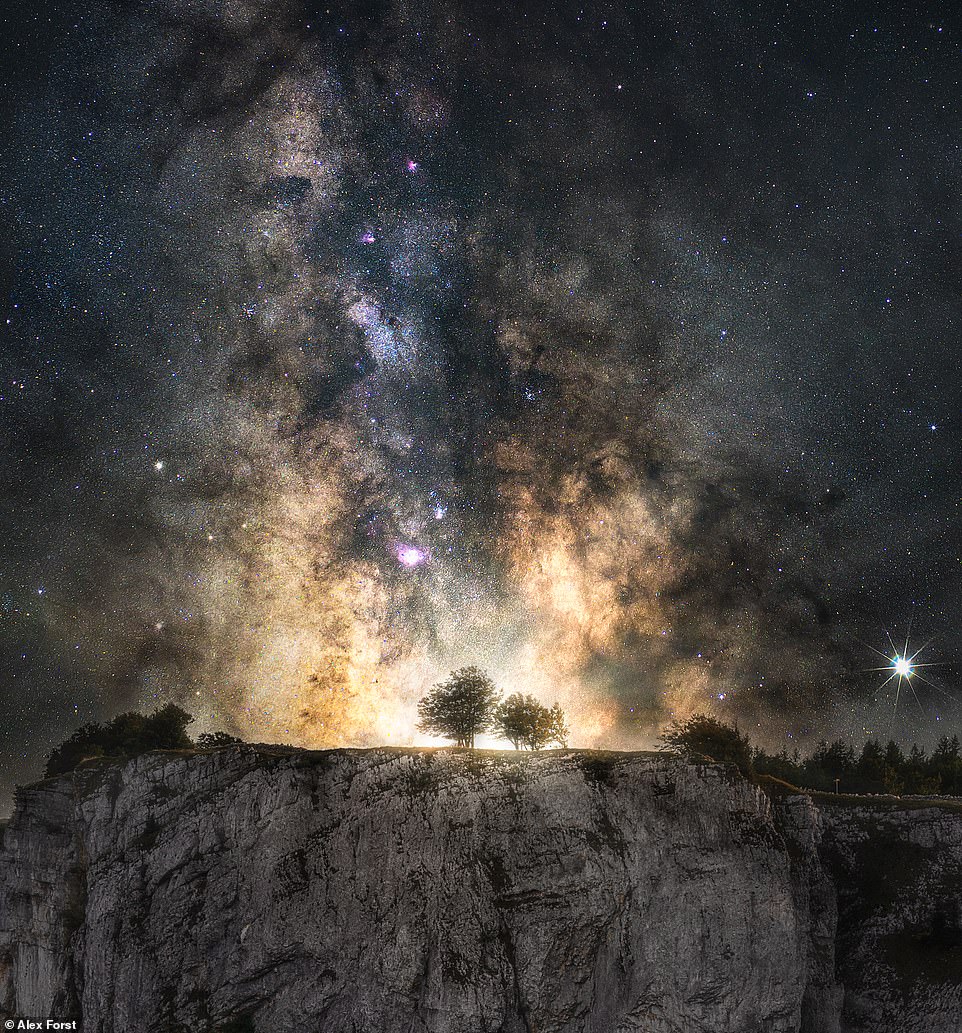 Alex says he likes to take pictures in places that he has never been before. This image shows Creux du Van, a magnificent rock formation in western Switzerland 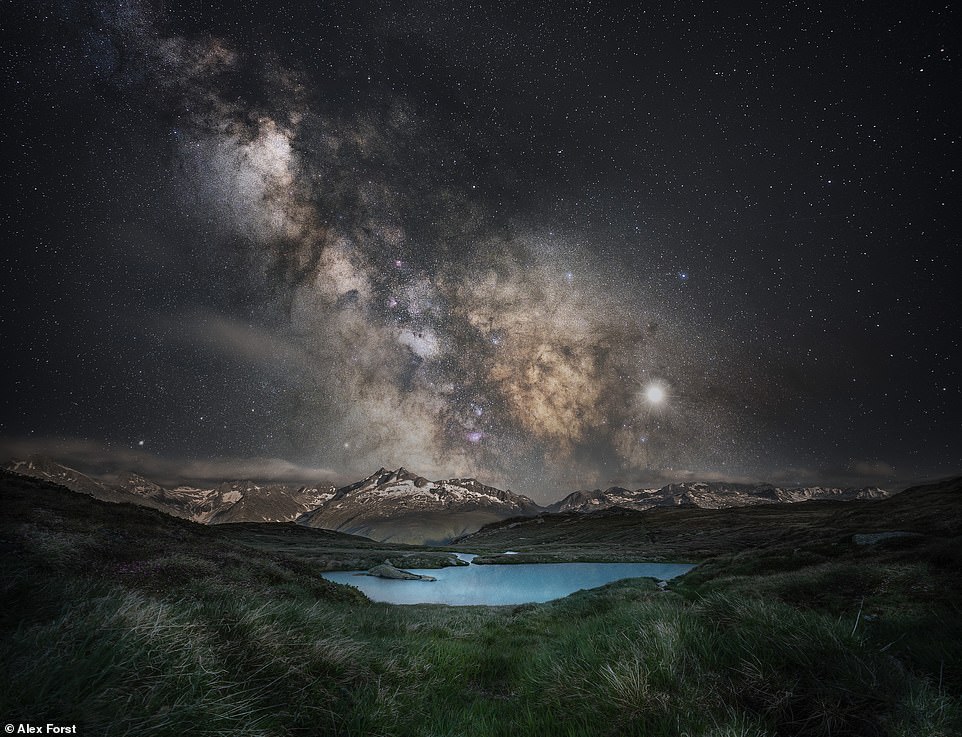 Alex says that without using specialised photography techniques, images taken at night can lack definition. This image was taken at the Grimsel Pass 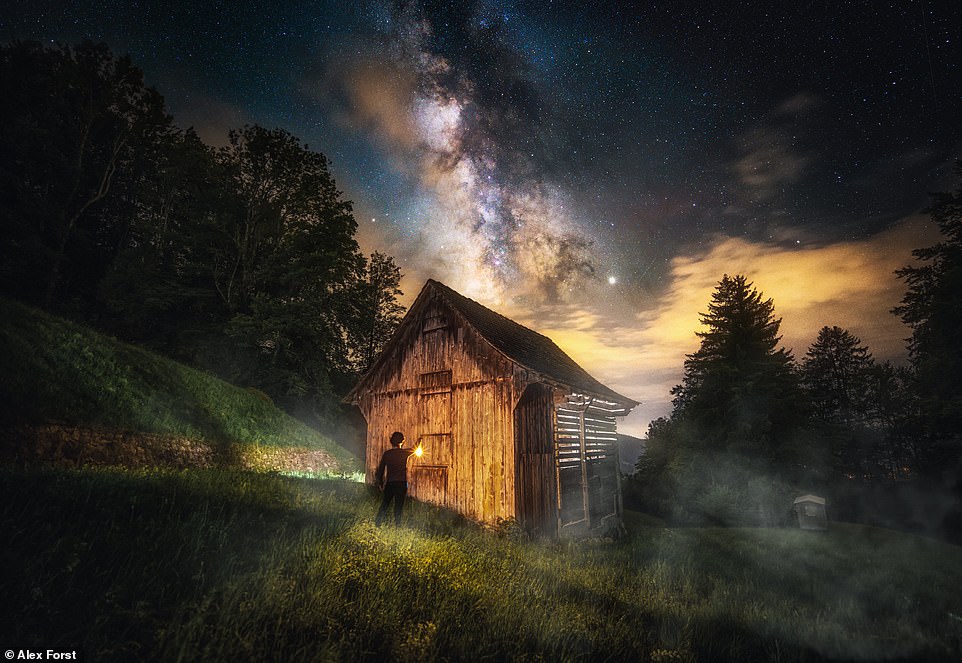 In order to make his pictures seem less flat, Alex often uses low-level lights to brighten up the foreground and tries to create shadows. He captured this scene in Walchwil