Home » Travel » How planes are guided across the Atlantic, which is out of radar range

Revealed: How airliners are guided across a vast area of the Atlantic that’s out of radar range (and why a new satellite tracking system will transform UK to North America flights)

If you thought that when you crossed the North Atlantic on an airliner that you were, reassuringly, a blip on a radar screen somewhere, then we’ve got news for you – you’re not.

Radar stations in the UK and North America have ranges of roughly 250 miles, so for a great deal of the journey, no one can see your aircraft.

So just how are the thousands of planes that make this voyage daily marshalled safely? It’s a system known as the North Atlantic Tracks – like motorway lanes at 38,000ft and it relies on pilots updating controllers with their position. 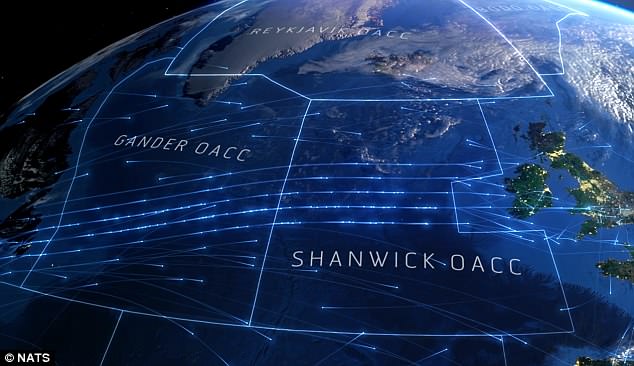 Here we explain how it works and how a new satellite tracking system is going to revolutionise journeys between North America and the UK – it may even help prevent tragedies like MH370.

The airspace over the North Atlantic is heavily used with up to 2,500 airliners soaring across it every 24 hours – and 2017 saw a record 500,000 flights crossing this area.

But for four or five hours every single one of these planes is off-radar as they cross two vast tracts of oceanic airspace – Shanwick Oceanic Control Area, which is 700,000 square miles, and Gander OCA. The former is mainly controlled by the Nats station in Prestwick, Scotland, and the latter by Nav Canada.

The reason that there’s no radar coverage for these areas is simple – there just isn’t any land on which to build radar stations.

Nats stressed to MailOnline Travel, however, that the planes are most certainly being monitored all the same, but this is done by position reports made every few minutes by on-board aircraft computers sending data communications and crew members using high-frequency radio. These radio communications are mainly handled in Shannon by the Irish Aviation Authority, with Prestwick handling the data links. 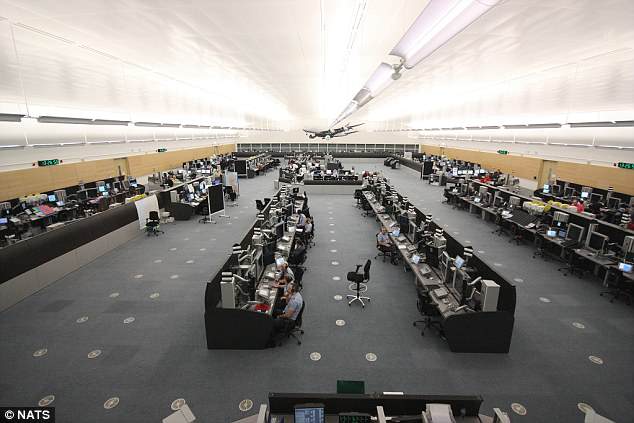 Around 700,000 square miles of airspace over the Atlantic is controlled by the Nats station in Prestwick, Scotland (pictured)

To make sure that the planes are safely separated, as well as using these reports, all the flights are organised into strict, pre-determined tracks – the aforementioned North Atlantic Tracks.

Nats told MailOnline Travel that there are normally five going east and five going west – but that it can be up to 14.

They change each day to try and take advantage of the Jet Stream, which predominantly flows west to east at up to 150mph at between 30,000 feet and 40,000 feet, according to Nats.

Because of the lack of radar coverage aircraft have to be kept much further apart than when they’re over land.

Nats said: ‘In radar airspace there is either a five nautical mile or three nautical mile minimum separation laterally between aircraft, however, over the North Atlantic it is 60nm laterally and for aircraft following on the same route it is based on time – essentially 10 minutes apart. For aircraft crossing another aircraft at the same level it is increased further to 15 minutes.’

And aircraft are given fixed speeds to make sure they don’t catch up with the plane in front.

The tracks are set up after requests for preferred routeings are received from airlines.

Nats positions them according to winds, costs and airspace restrictions and labels them from ‘alpha’ upwards.

However, a revolution is about to take place that will mark one of the biggest transformations in transatlantic flight in decades. 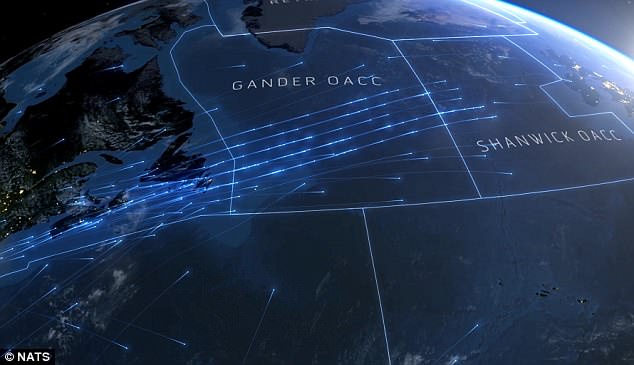 Nats announced last week that it has invested in a US company called Aireon, which will use a network of 66 satellites to provide real-time global air traffic surveillance for the first time ever, including over the oceans, deserts and mountain ranges.

Five satellites for this system – known as Space Based ADS-B – went up with this week’s SpaceX launch and the last of the satellite constellation is set to launch in late 2018.

With annual transatlantic flight numbers expected to hit 800,000 by 2030, this system is very much needed.

Nats said: ‘Using this data provides instantaneous updates on flight progress and in doing so, can deliver a quantum leap in capacity and service performance, making flying safer, cheaper, greener and more predictable. Not only does it allow for an increase in capacity, it allows shorter notice changes to flight planning, the use of more efficient routes, flight levels and variable speeds, all of which translates into fuel and emissions savings.

‘Around 80 per cent of traffic will be able to fly without speed restriction, compared with the fixed speed environment operated today. Providing airlines with their requested and most efficient flight trajectories and allowing them to fly without speed restrictions correlates directly with fuel savings for airlines and emissions savings for the industry.

‘We’re currently consulting with the airlines about bringing this into service over the Atlantic from 2019.’

Although it does rely on planes broadcasting their position to the satellites, so a security risk would still be present.