Home » Travel » Restore your body and mind with hydrotherapy, acupuncture and more at Soho Farmhouse’s spa 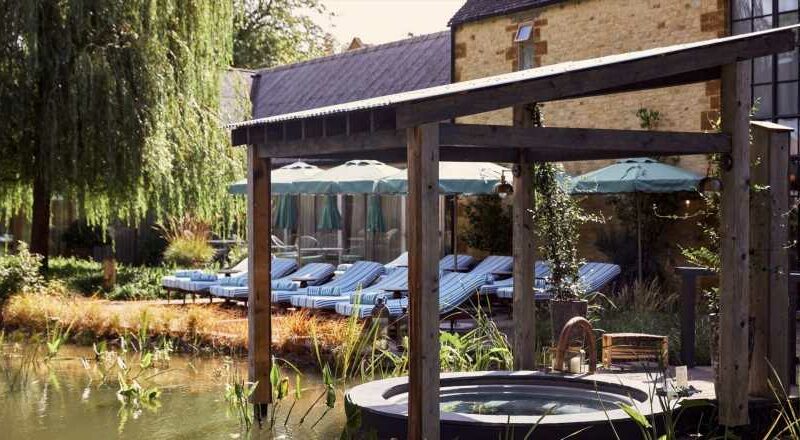 Ready for full-on relaxation? Head to Soho Farmhouse for a new-year wellness reset.

For seven years, Soho Farmhouse has been the ultimate countryside nirvana: 100 acres of Cotswold countryside dotted with rustic cabins, whitewashed huts and walled garden rooms that guests meander to and from on bespoke Foffa farmhouse bicycles.

Whatever restorative pursuit you’re after, they’ve got it: boating lake, indoor-outdoor pool, cinema, pickle room, curing cave, milk floats that double as mobile fry-up carts… The list goes on. Facilitating a recharge and a reset is what they do best.

It stands to reason, then, that the last few months have seen them seriously upping their spa credentials to create a wider wellness offering. Last October, the Farmhouse Health Club got the addition of a ‘Lazy Lake’: an outdoor spa circuit based on Scandinavian hydrotherapy where you take your body from hot to cold to hot to cold until you’ve boosted your circulation, flushed out your toxins and you’re left feeling fully revived.

Behold the ‘Lazy Lake’: an outdoor spa circuit based on Scandinavian hydrotherapy where you take your body from hot to cold to hot to cold

At the Farmhouse this has been translated into four waterside onsen-style baths that you bathe in while applying a clay mask, before working your way around the steam room, ice room and infrared saunas – all within an invigorating two-hour session.

It’s a serene setting, and it makes the perfect backdrop for the spa’s other new addition: its Sarah Bradden residency, which is ongoing until the end of January 2023 and is specifically designed to reverse the damage caused by overwhelmed minds and tired, stressed bodies. Yes, I know, I relate too.

For those who don’t know her, Bradden is an in-demand cosmetic acupuncturist and holistic therapist who has founded the Bradden Method, a 360-degree holistic treatment that’s rooted in traditional acupuncture but enhanced by modern bio-hacking technology (in other words, things that optimise the performance of the body, such as LED light therapy). Its aim? To make you stronger on the inside and brighter on the outside, and while I’m not entirely clear what’s in store for me, I’ve been promised that 90 minutes with Bradden will recalibrate my parasympathetic nervous system, boost my immunity, increase my energy levels and give my skin a renewed sculpt and glow.Which, clearly, I’m up for.

Unwind with a customised treatment

The Bradden Method is totally bespoke. She believes everyone’s stories and symptoms are different and therefore the treatment should be too, so our session starts with a verbal consultation and tongue reading to establish my physical and emotional symptoms. Me? I’m frazzled. Fried. ‘Running on dust fumes,’ as Bradden herself puts it, with an anxious nervous system that’s in a permanently hypervigilant state. Oh dear. Will 90 minutes be enough?

The first thing that happens is I’m fitted with a nasal cannula to deliver activated oxygen throughout the treatment (it improves oxygen levels within the body and stabilises the nervous system) before Bradden positions acupuncture needles across my face: ears (alongside ear seeds), nose, forehead, above the mouth. More are put in my feet. Then out comes the LED light. Suddenly I’ve got goggles on like I’m on an old school sunbed but I feel warm and nourished, as though I’m being beamed up to heaven.

While I’m basking under the light, needles doing their thing, Bradden performs reiki, telling me later I have blocked energy, which is all gathered in my head and shoulders. I don’t fully sense her presence as she works, so happy am I with my cannula and LED light, but at one point I do feel my body release in its entirety and sink deeper into the bed. Reflexology follows. Not the flinching toe-popping kind I’ve had before in a Soho side street, but a gentle barely-there foot massage that’s a wonderful complement to what else is going on.

I feel warm and nourished, like I’m being beamed up to heaven

Once the LED light is switched off and the needles are out, the last piece of the puzzle is a face sculpting massage: a mix of gua sha and fingerwork that’s so precise you instantly know it’s having an impact – kind of like Bradden’s woken up my soul through my skin.

Afterwards, I’m floaty and spaced out in a pretty delicious way – something she tells me to enjoy and suggests I seek out really great food. Her method has been described as a ‘spiritual reset and facelift’ in one, and I can’t disagree. I feel calm and nourished. My face is fresher and tighter. More importantly, I’ve made a pact with myself to make 2023 the year I finally unblock my energy. If I’m honest, I’d have taken both Bradden and her activated oxygen home with me for good – but for now, you’ll find them at the Farmhouse.

Treatments at the Sarah Bradden Residency at Soho Farmhouse are available until the end of January 2023 and range from £99-£395. The Lazy Lake two-hour experience costs £60 per person.

Non-Soho House members can book rooms and treatments by becoming a Soho Friend for £100 a year.