It follows this week’s reports that the airline has cancelled 600 flights next week due to cabin crew striking in Belgium, Portugal and Spain. 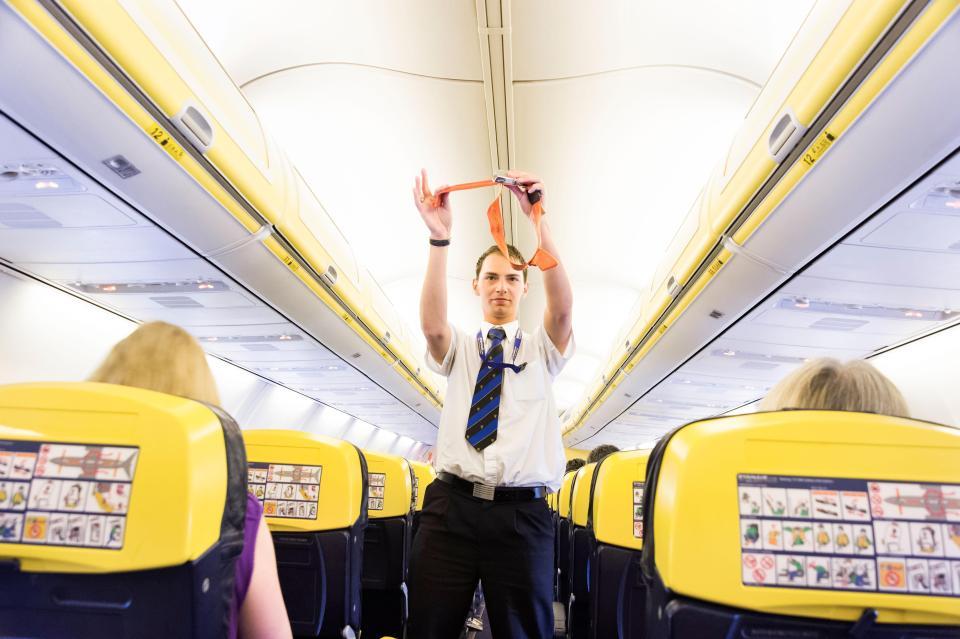 The airline cancelled 24 flights today between the UK and Ireland as 25 per cent of their Irish pilots are on strike.

The carrier has warned that if another pilot strike like today’s happened, 16 flights will be cancelled next week Tuesday (July 24).

Ryanair has written a letter to the pilots’ union, Forsa, asking them to call off the strike.

They are walking out over pay and working conditions, including promotions and annual leave. 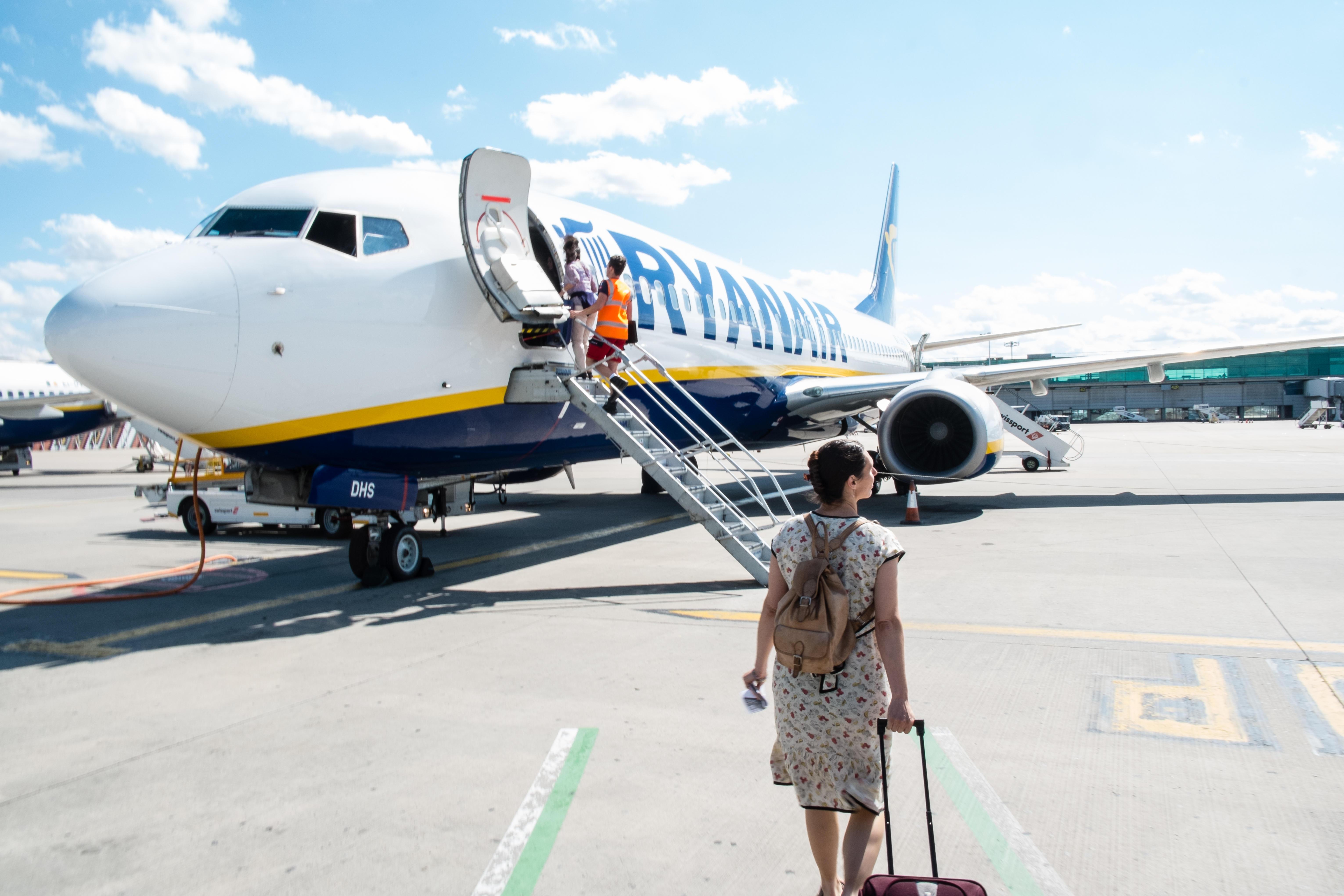 The letter, posted to Twitter yesterday, reads: “Forsa committed to getting back to Ryanair as to how this matter could be resolved so thousands more do not have their peak season travel plans disrupted by a small group of pilots who can’t explain what they want.

“Unless we hear back from Forsa by 7pm this evening calling off the unnecessary cancellations tomorrow, Friday, to passengers on 16 flights to/from Ireland next Tuesday.

“We can readily re-accommodate this small number of customers onto other flights.”

A statement by Ryanair today reads: "We call on Forsa to cancel the third strike on July 24 which is supported by less than 25 per cent of our Irish pilots.

"Our pilots should resolve these issues through our working group and should not disrupt any more customer holidays."

Customers affected by the strikes have commented on Twitter about the situation.

Scott Bryson wrote: "Yeah… we know… but how about sorting the refunds and not ignoring customer issues with your systems? Any chance of that? Or you gonna keep ignoring it like you’ve done for 2 days?"

Adelkarim El-Fassi wrote: "My Ryanair flight just got cancelled due to ‘unnecessary’ cabin crew strikes. I totally support the crew on this one. Fight for your rights. My holiday can wait."

User @paparozzi7 wrote: "Ryanair need to STOP this strike immediately on the 25th & 26th of July otherwise our whole wedding will be ruined by our guests not being able to fly out to our special day. Please do not ruin our wedding day…Everyone retweet help a bride out #ryanairruinweddingday." 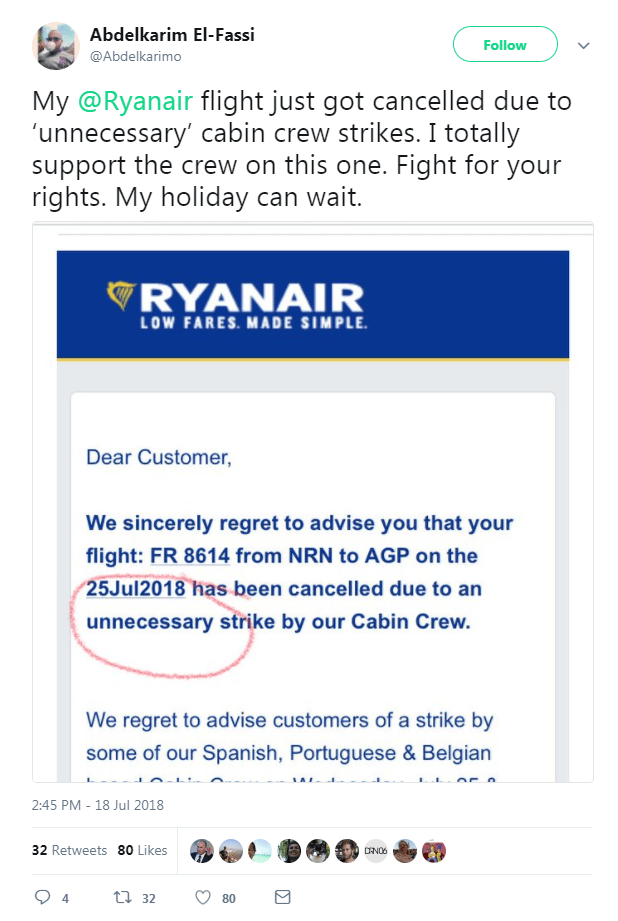 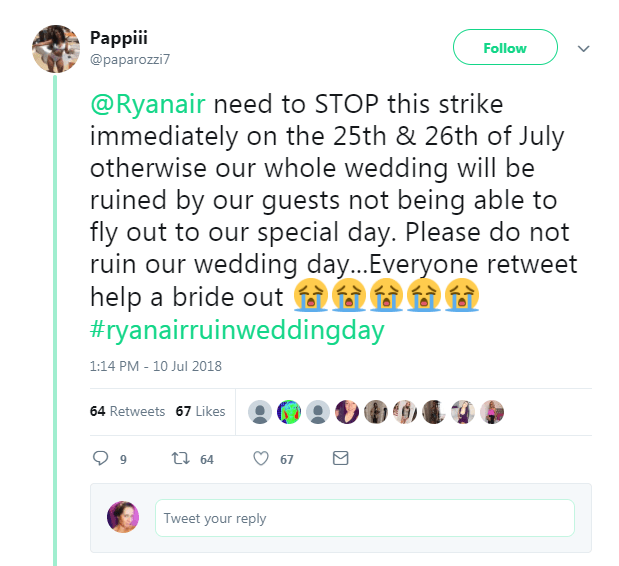 Ryanair said that they had text messaged 50,000 customers to let them know their flights have been cancelled.

These passengers will be offered alternative flights, or a full refund of their fares and extra staff will be added to customer services to help deal with call volumes.

The airline revealed that 12 per cent of its customers will be affected by the action.

If you are travelling to Belgium, Portugal or Spain next Wednesday or Thursday and haven’t yet received an email or a text, then your flight should be going ahead as planned.

Ryanair’s Kenny Jacobs said: “Ryanair sincerely apologises to our customers for these disruption, which we have done our utmost to avoid.

"[They have] industry leading rosters (14 days off each month), great sales commissions, uniform allowances and sick pay, these strikes are entirely unjustified and will achieve nothing other than to disrupt family holidays.”

Cabin crew from across Europe published a list of 34 demands on July 4, including "a fair living wage", improved sick pay and employment contracts in their own language based on local rather than Irish law.

Flight attendants said at a media briefing they were forced to physically report to work when sick to provide written details of symptoms.

They said they also struggled to claim sick pay as their terms and conditions often straddled the law of Ireland and their home country.

The cabin crew, who spoke on condition of anonymity as they feared reprisals if they went public, said staff from several EU countries were forced to travel to Ireland to open bank accounts in order to receive pay.

Sun Online Travel previously revealed that a Ryanair flight attendant claims she was told to sell more in-flight snacks before they would move her to be closer to her sick grandmother.

Ryanair have also been accused of issuing staff with disciplinary action if they don't sell enough scratchcards and perfume.