Exploring Roquefort’s amazing caves and the pretty villages where selfie-takers must… say cheese!

A lingering odour haunts the streets of this sleepy village in southern France. It’s neither unpleasant nor overwhelming – wafts of air carry hints of the salty, full-bodied aroma of roquefort cheese, made in the place whose name it shares.

The ribbon of a village snuggled at the base of a limestone plateau in the Aveyron region is home to just a few hundred inhabitants. Lorries rumble along the main street but it is devoid of shops. It certainly doesn’t look like the most likely place to produce 19,000 tons a year of the king of cheeses.

That’s because the secret of Roquefort-sur-Soulzon lies underground. In a series of caves that would stretch for more than a mile if you put them end to end – longer than the village itself – cheese made from unpasteurised ewe’s milk impregnated with the penicillium roqueforti mould is left to ripen for weeks. 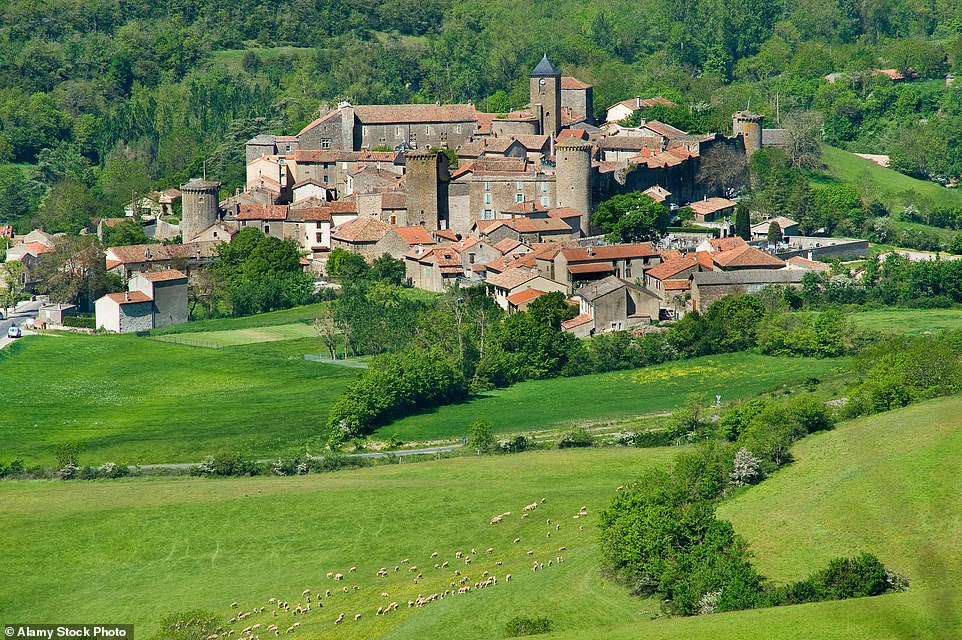 Stronghold: The Templar commandery in the medieval fortified village of Sainte-Eulalie-de-Cernon, built by monastic knights

It’s a must-see for fromage fans. I’ve watched goat’s cheese being produced n the Loire, tried my hand at making reblochon in the Alps and have visited a whole cheeseboard of places in France, from Camembert in Normandy to Cantal in the Auvergne. None has been as interesting as the home of roquefort.

A labyrinth of dripping underground corridors link the 11 levels of caves at Societe, the largest of the seven producers and the best of four to offer tours. These natural caves have been painstakingly made into architectural wonders of arches and columns.

In the dim light, row upon row of white rounds, each weighing almost half a stone, are lined up on wooden racks, and a much stronger version of the smell on the street attacks the nostrils.

Master refiners can sometimes tell how ripe the roquefort is just by closing their eyes and sniffing, though you are more likely to see them use sampling rods which they dig in to examine a core. They work tirelessly to control this initial ripening, keeping the cold, humid conditions stable by opening and closing the caves’ natural air vents which were created by a network of rock fissures. 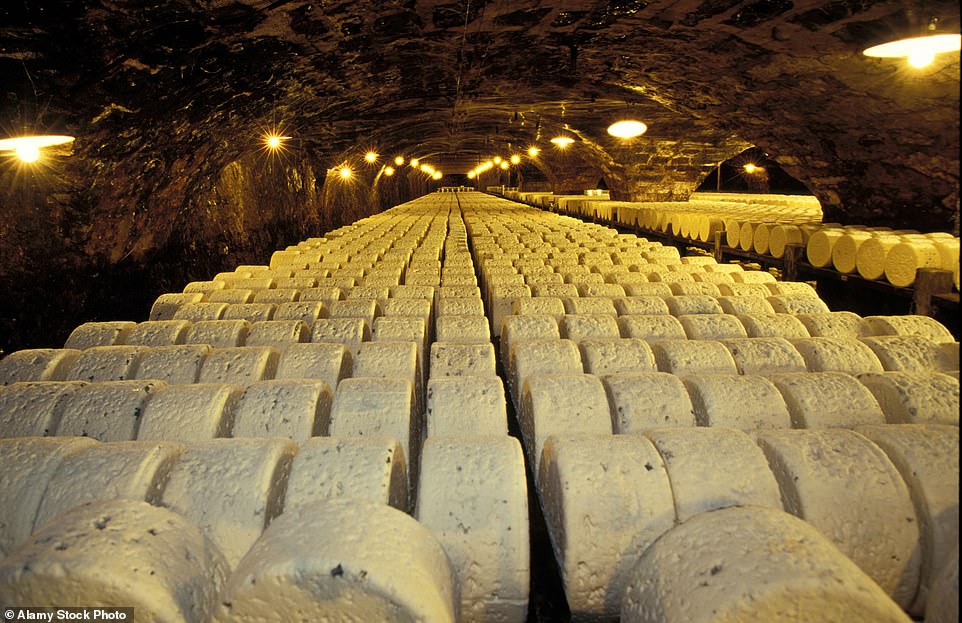 It’s how they roll: The Mail on Sunday’s Jane Knight visited Roquefort’s caves where the famous blue cheese is produced

The underground network was formed millions of years ago when part of the Combalou limestone plateau overshadowing the village collapsed. That plateau is a great place to hike, although the Ladder Path is not for the faint-hearted, with a steep ascent on the four-mile loop. It’s worth it, though, for fantastic views of the village and the distant plateau of Larzac, along with the knowledge that you’ve worked off enough calories to justify one of the many roquefort specialities back in the village.

They even serve creme brulee with roquefort here, but for traditional options, including crepes and salads, the best places to go are the atmospheric, vaulted Les Fleurines or the Creperie la Bergerie.

Lunch in Roquefort has clearly come a long way since the legend of its origins, when a shepherd left his meal of bread and the curd from sheep’s milk in a cave before going in search of his lover. When he returned much later a blue-coloured moisture had formed over the curds. 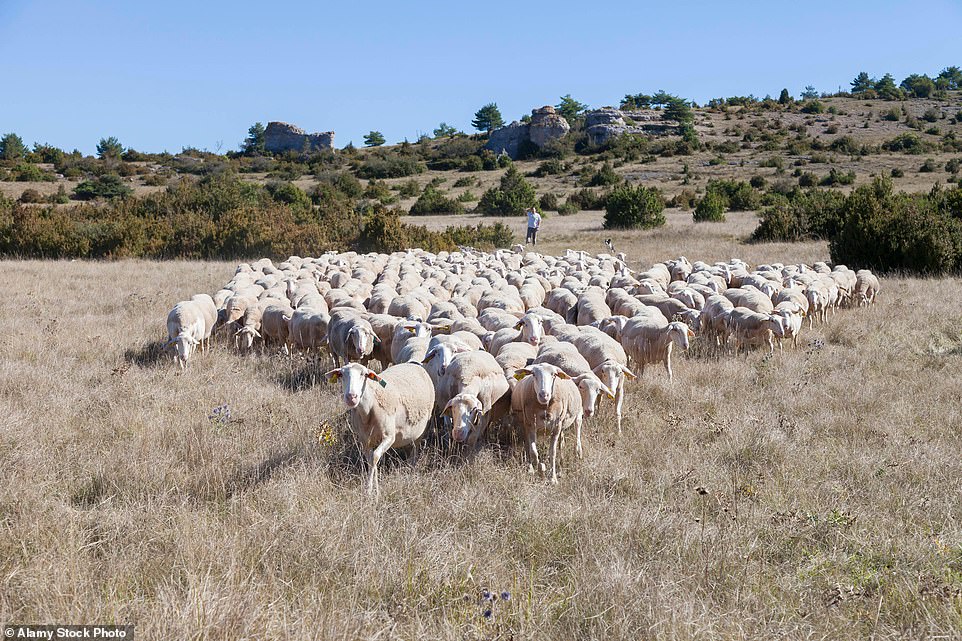 Roquefort-sur-Soulzon is just over two hours’ drive from Toulouse, or one- and-a-quarter hours from Rodez, where Ryanair flies to in the summer. Madame Marques’s guest house in the village has two simple guest rooms, and there are beautiful views of the Combalou plateau from the terrace. B&B doubles are from €65 a night (chambres-roquefort.fr). For other places to stay in the area, go to roquefort-tourisme.fr.

Whether or not it’s true, the producer Papillon honours that legend by baking hundreds of rye loaves at the time of the September full moon before leaving them in the caves for weeks to develop a thick covering of penicillium roqueforti mould that will be used in the ripening process.

If you haven’t had a surfeit of fromage facts by now, head to the Ferme des Fleurines just outside the village, where rows of Lacaune ewes gaze placidly from their milking pens. They are milked only from January to July, which is the time when the rounds of factory-produced cheese are left to ripen in the caves, so time your visit well.

More sheep graze over the Larzac plateau, an enormous arid plain punctuated by rocky outcrops and wild gorges, and home to a handful of medieval fortified villages.

Formed by the Templar and Hospitaller orders of monastic knights, they include the commandery of Sainte-Eulalie-de-Cernon with its fresco room, monks’ dormitory and commander’s apartment. You can walk around the ramparts at La Cavalerie and explore the maze of alleyways, communal oven and Templar Castle at La Couvertoirade, which has been named one of the most beautiful villages in France.

Another short drive to the Norman Foster-designed Millau Viaduct brings you hurtling back through the centuries from medieval to uber-modern. Spanning a mile and a half across the Tarn Valley, and the gateway to the natural wonders of the spectacular Tarn Gorges, the viaduct is a destination in its own right.

There’s an exhibition centre and a self-guided tour, which is well worth the €6 fee.

Then drive to the nearby village of Peyre for one of the best viewpoints to get that perfect picture. When you’re snapping a selfie, though, do remember to say cheese.