Such a dishy city! Searching for the perfect paella in Valencia – the city that is a scrumptious mix of ancient and modern

On the final evening of our three-day cultural tour of Valencia, dolled up and festive, we went for a slap up dinner at the swish Marina Beach Club.

Clearly the club is a place to see and be seen. This great barn of an upmarket seaside restaurant was packed with beautiful young Valencian nouveau riche shouting happily at each other.

The noise was incredible. And yet it was at this popular restaurant that we had the worst dining experience of our entire lives. 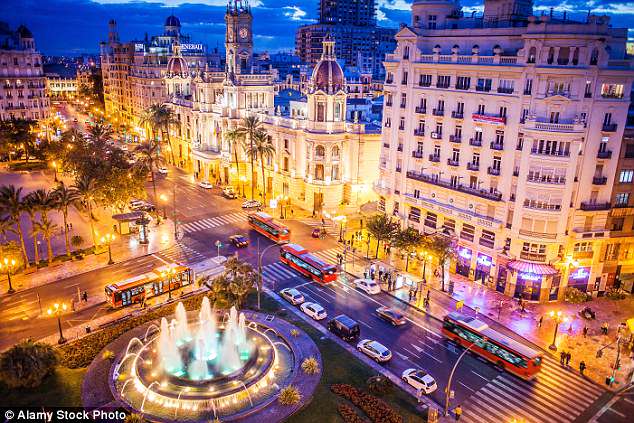 Magnificent: Valencia (above) by night. The Daily Mail’s Jeremy Clarke took a three-day cultural tour through the Spanish city

The food — what little we saw — was rubbish; our waitress appeared to despise us. When I meekly asked for a knife and fork, she threw them on the table. They bounced. Twice. We couldn’t get a drink.

When the waitress begrudgingly shoved a bottle of wine on the table, the wrong one, we passed a glass between us pretending it was the Holy Grail.

But were we downhearted? Not a bit. After 72 hours of sightseeing, we were stuffed to satisfied surfeit with Valencian art and culture. We had seen everything — and what a thrill it all was.

We’d been to the Chapel of the Santo Caliz in Valencia Cathedral and gawped at the actual Holy Grail. We’d visited the late medieval Lonja de la Seda, or Silk Exchange, a masterpiece of civil Gothic architecture. Under shade trees outside the Silk Exchange, we’d watched traditional Valencian dancing. We’d eaten tapas at the Colon covered market, a landmark of Art Deco architecture.

We’d visited the Bombas Gens Centre D’art, an old water pump manufacturer with an Art Deco facade converted to a gallery with 1,500 works of modern art by 150 artists, including Robert Mapplethorpe. 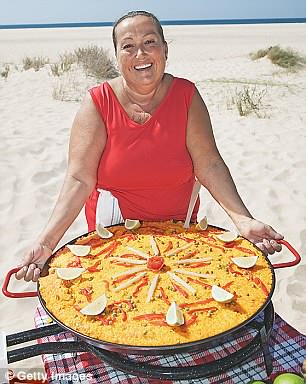 Paella is Valencia’s most famous meal

We’d even been taken on a guided walking tour of Valencia’s rather unremarkable, council-maintained graffiti. Afterwards, we were privileged to meet foremost Valencian street artist Vinz Feel Free.

Wearing a tracksuit top and jogging pants, Mr Feel Free personally conducted us around his new exhibition at the Carmen arts centre, a palatial former convent.

Had recognition, respectability and paid employment softened the poacher turned gamekeeper’s Leftist credo? His giant prints and photographs of nude pelota players with superimposed animal heads said an emphatic no.

We visited the Silk Museum and learned about the laborious silk making process from mulberry tree to silk moth cocoon to weaving loom to museum gift shop tat.

And at the Museum of Fine Arts, a spokesman for the Valencian tourist board, solemn with excitement, confided to us that the city’s hidebound conservative council had been slung out, and a Left-wing one elected in its place.

He had a dream of bright sunlit ideological uplands dotted with costly, consciousness-raising public art. The public art we’d already seen was of startling banality. God loves a trier. We nodded approvingly.

The river Turia once flowed through the centre of Valencia. In 1957, it naughtily overflowed its banks. As a punishment it was diverted away from the city centre and the river bed was planted with public gardens. The old bridges remain; the gardens and embankments have been sown with public art and post modern architectural statements such as Valencia’s ambitious new opera house.

Designed by celebrity architect Santiago Calatrava, the Palau de les Arts Reina Sofia is his homage to the homicidal sci-fi creature in Alien. As well as the Turia Gardens, Valencia has dozens of green spaces, including two botanical gardens, the Monforte gardens, the magnificent parks Glorieta, Cabecera, Alameda and Viveros.

In the latter, we sat in a packed grandstand and were tortured for an hour and a half by the vibrant Armenian-Lebanese electric violinist Ara Malikian playing maniacal covers of Led Zeppelin and David Bowie.

Valencia is home of paella and where Spanish women still waft air over themselves with elaborate fans. In September, fighting bulls are run through the streets. Taxis are relatively cheap and there is a metro.

We stayed at the Sercotel Sorolla Palace hotel, ideal for the budget traveller. I didn’t realise it was a cheap hotel until I made it to breakfast one day and saw that the room was full of ordinary Valencians. If you go in July, you’ll need a parasol and fan. And for crying out loud avoid the Marina Beach Club.