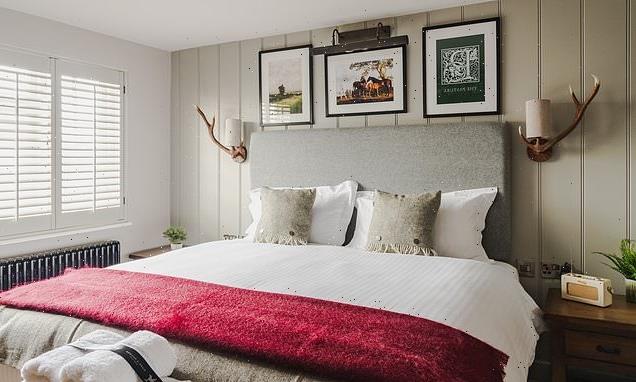 The Watermill Theatre on the outskirts of Newbury in West Berkshire is one of those little-known glories of the Home Counties — although much appreciated and not little-known by locals.

Within walking distance is the newly opened Hare & Hounds, with 30 rooms spread among the main building and three outbuildings, including the stables.

What you get in this former coaching inn is fairly standard after a major refurbishment: nothing too flashy, a sense of humour (military men with dog heads), antler chandeliers and lights, quotes about the joys of booze painted on walls. And reasonable prices. 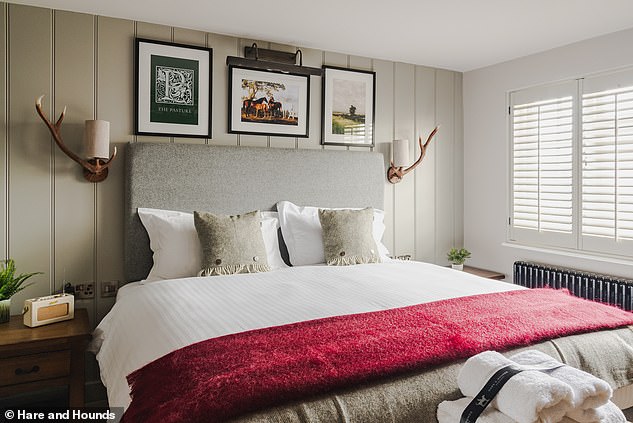 The Inspector checks in to the Hare & Hounds, a former coaching inn in Newbury

Mind you, our room at the top of the main house is in the eaves and feels cramped, with a tiny window overlooking the car park. Really, this should be a single room. There’s no space for proper bedside tables; no room for a mirror above the basin; no room for a chair of any description.

Highclere Castle (as in Downton Abbey) is nearby and clearly Grosvenor Pubs — which has three other establishments of the same genre — hopes this will be a selling point. Even so, it seems like overdoing it by having one room called Highclere and another named Downton.

The big wrap-around bar should be doing good business on a Friday night, but it’s quiet. That could be because for all its newness, it’s not particularly inviting.

Unlike the main dining area in a converted barn, which is buzzing with bonhomie. 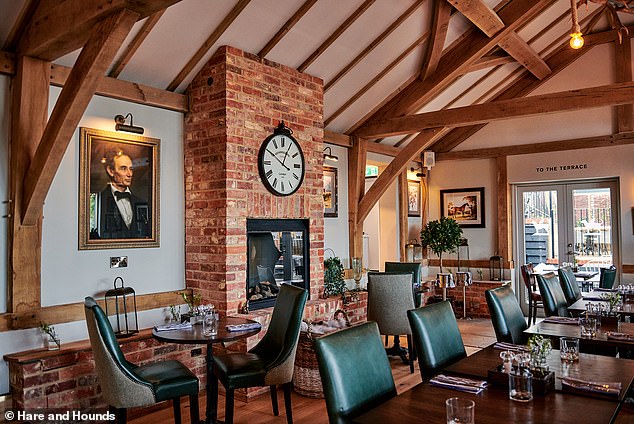 The dining room at the Hare & Hounds, where guests dine on a wide range of grills and burgers. ‘We can’t resist the pork scratchings,’ says the Inspector

First rule in a place like this should be: get the drinks on the table as fast as possible. Which happens here.

The menu is fairly standard, too, with a wide range of grills and burgers. We can’t resist the pork scratchings while waiting for our Caesar salad starters, followed by chicken and ham pie for me, fish and chips for my companion.

We get chatting to our waiter. He looks like he’s in his 20s but says he’s only 16. We wonder if this brush with hospitality will be enough to make him want to go into the business full-time once he leaves school. We hope so. Certainly, everyone working here is enthusiastic.

Newbury is not overrun with pubs like this one. But whether it’s special enough to lure outsiders is another matter.