Home » Travel » The Oasis at the End of the Dusty Road

The saga of Castle Hot Springs resort sounds like a Carl Hiaasen novel if he swapped South Florida for Arizona’s Sonoran Desert. The history of the hard-to-access oasis an hour’s drive north of Phoenix has involved a quail-hunting, self-made mogul, Native Americans, new age crystal worshipers, scheming hoteliers and a gun-toting, toothless caretaker who had an enormous pet pig and strategically placed dead rattlesnakes to scare off people — and those are just the recent chapters.

Save for the hunter, all were after its namesake natural resource. Rich in minerals and free of sulfur’s rotten-egg smell, the springs’ water cascades and trickles down mossy rocks at the rate of approximately 200,000 gallons per day into two tiered pools ranging from 95 to 108 degrees Fahrenheit.

“You’ll feel the energy. Breathe it in,” said Gertrude Smith, director of Yavapai culture for the Yavapai Apache Nation in Camp Verde, Ariz., who said the springs had been a place of healing for her ancestors, until they were discovered by Anglo settlers after the Civil War. “Our people would go there when they were injured or pregnant.”

After being closed for more than 40 years, the newly restored resort reopened in February for a brief season — because of the desert heat it will close on May 31 and reopen on October 1. Once recreational vehicles peel off the dirt road for Lake Pleasant Regional Park, ramshackle homesteads are the only signs of civilization until the resort’s sultan-worthy allée of mature date palms appears like a cartoon mirage. A driveway winds past pale yellow cottages and a chapel to the renovated main lodge and a cluster of new, contemporary bungalows. 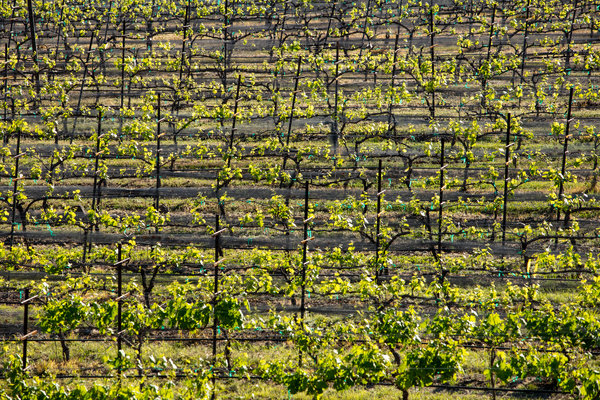 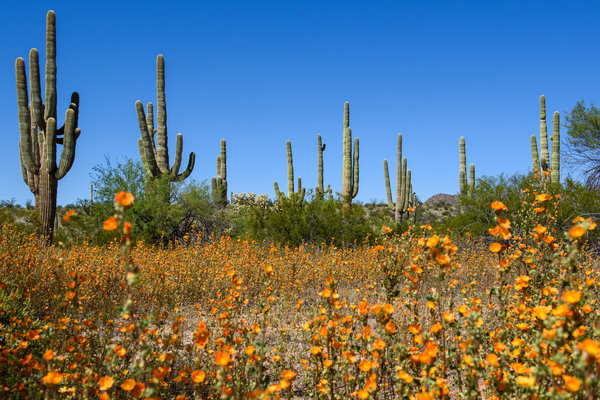 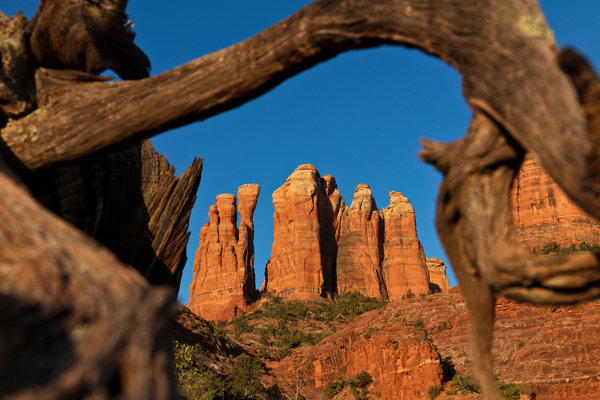 The springs have a long, fuzzy history of enchanting speculators and generations of wealthy families. The abridged version begins with George Monroe, a prospector more interested in gold than natural beauty, who staked his claim in the 1870s and named the springs after himself. 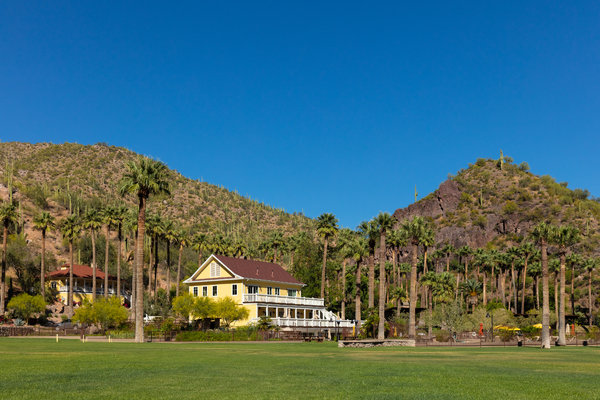 From Maxfield Parrish to the Rockefellers

The site was transformed into an elite resort at the turn of the 20th century when the railroad and mining magnate Frank Murphy and his brother, the Arizona territorial governor Nathan Oakes Murphy, established the Castle Creek Hot Springs Improvement Company. Rand McNally touted the destination as a new mecca of the West, and construction cranked up. Briefly serving as a sanatorium, where Maxfield Parrish painted the dramatic scenery while curing his tuberculosis, the resort soon traded patients for deep-pocketed patrons.

Walter Rounsevel, its debonair manager turned owner, catered to the Rockefellers, Roosevelts and Goldwaters of the country. Alberta Pew, wife of Joseph N. Pew Jr., the oil scion and cofounder of the Pew Family Trusts, spent 60 consecutive winters at the resort.Mr. Rounsevel ran Castle Hot Springs for decades, including the Second World War, when injured veterans like John F. Kennedy were sent there to convalesce after wartime duty. Kennedy called the food only fair.

“Rounsevel was a larger-than-life character to all us kids,” said Charles Trainer, an heir to the Schlitz brewing fortune, whose grandparents spent their winters at the resort for years. “Walter Gropius was another regular. I remember going on horseback rides with him when he was quite old.”

Mr. Trainer and his brother Steve bought Castle Hot Springs in the 1980s. The resort had closed because of a devastating fire in 1976. The brothers hired a succession of experts to try and reopen it, but none managed it.

“This thing is truly a book,” said Elizabeth Brazilian, a former developer who proposed a wellness retreat for the property that never opened. “When you add in the other factors like providing employee housing since staff can’t commute, and that it can only operate half the year due to the heat and flash floods, we just couldn’t figure out a way to make a profit,” she said.

The new owner, Mike Watts, became smitten with the 210-acre property while quail hunting at the resort in the early 1970s, bought it in 2014, and then acquired its surrounding 900 acres late last year. He and his wife, Cindy, local entrepreneurs and philanthropists who recently gave $30 million to Arizona State University to found the Watts College of Public Service and Community Solutions, were looking for something to do in their quasi-retirement after selling their construction equipment rental company.

“I never dreamed I’d go into the hospitality business, but it’s a unique place and story,” he said, of renovating and expanding the resort. “It was a real eye opener when a fifth-generation resident of Wickenburg near here called to thank me for rebuilding it. That’s when I had a greater understanding of how many people feel it’s a treasure.”

Helicopters instead of Pullman cars

Before the automobile age, visitors to the resort went through the ordeal of taking a train, often in private Pullman rail cars, to Morristown, Ariz., followed by a 23-mile, dusty stagecoach ride. They stayed for the season to justify the trek, unlike today’s weekenders who have the option to arrive by helicopter.

Entering by SUV or truck still requires crossing several washes on a rocky road for half the journey. The cost of transporting building materials and daily supplies over such difficult terrain was one of the reasons previous efforts to revive the resort failed.

A starter kit for escaping into the world.

The Wattses envision the resort as Arizona’s answer to the all-inclusive Blackberry Farm in Tennessee that’s on every Garden & Gun subscriber’s bucket list. There are just 32 rooms ($660 to $2,200 for two with breakfast, lunch and dinner and gratuities, excluding alcohol) and guests choose their own adventures from back-to-the-land activities like harvesting chrysanthemum greens and borage for salads right outside the main lodge’s kitchen door, riding trail horses and hiking the Bradshaw Mountains. The great lawn — a lush, emerald carpet despite being in the middle of the desert — is set up for classic resort activities like croquet, and come fall there will be Frisbee golf.

The couple hired an executive chef who had cooked at Gordon Ramsay’s and David LeFevre’s restaurants in Southern California, along with an agronomist who planted 150 types of vegetables, herbs and edible flowers to supply the resort’s kitchens and bars.

The Wattses intend to bottle their own mezcal and a blue agave plantation is planned.

“Tequila and mezcal are having a moment, and it will be nice for sipping,” said Mr. Watts, who has already developed lager exclusively for guests with Phoenix’s Helio Basin Brewing Company. (One of the original outbuildings will eventually house a brewery.) 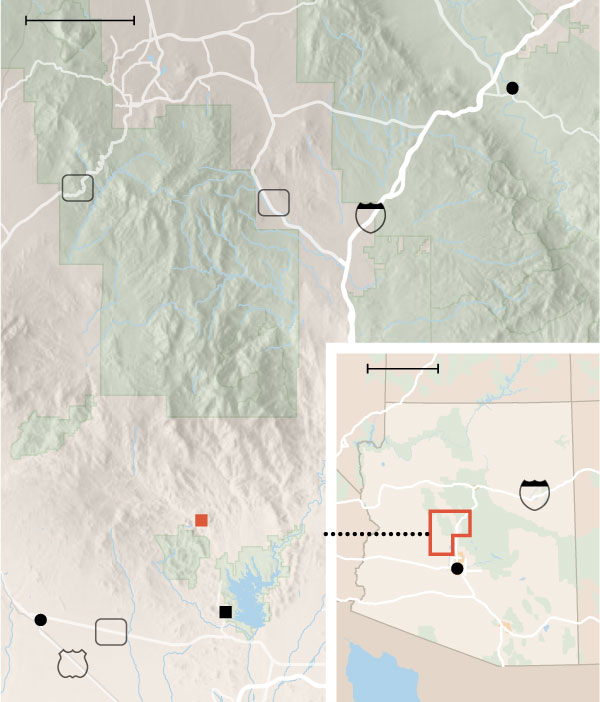 By The New York Times

The resort’s spa heritage lives on through tented treatment rooms at creekside and cabins’ outdoor soaking tubs that are hooked up to the springs for heated, mineral baths. WiFi is available only for emergencies. Dark-sky stargazing is also encouraged with campfires and telescopes. Children under 16 aren’t allowed.

Mr. Watts and other involved in the project declined to say how much it had all cost.

“People like numbers. I’d like to be able to tell them it cost $80 million or some other amount, but I honestly don’t know, and I don’t think you can really put a price on it anyway,” said Steven Sampson, director of national sales for Westroc Hospitality, Castle Hot Springs’s management company, whose portfolio also includes the Sanctuary Camelback Mountain and Mountain Shadows. “It’s an entirely different concept for the market, too, because it’s about passion versus profit.”