Home » Travel » The people&apos;s choice Wildlife Photographer of the Year snaps will amaze

Squabbling mice, playful polar bears, a touching moment between a pair of kestrels and a sunbathing leopard.

These are some of the subjects that feature in the 25-strong shortlist for the Lumix People’s Choice Award, which is part of the Natural History Museum’s Wildlife Photographer of the Year competition.

Organisers sifted through 48,000 entries from 100 countries before deciding on the shortlist for the award and now the public is being asked to vote for the winner.

The top-ranked photo will be showcased at an exhibition in London’s Natural History Museum until May 31, 2020 – and whichever one claims the grand prize will be a worthy winner because the standard is jaw-dropping.

Some of the photos don’t make for easy viewing, though. One heartbreaking shot shows an orangutan dressed in boxing gloves in Thailand and another captures a desperate panda locked in a cage in China.

Tim Littlewood, executive director of science at the Natural History Museum and member of the judging panel, said: ‘The Lumix People’s Choice images capture the essence of the competition. They all ignite a reaction about the natural world and make you see it differently. Showcasing breathtaking beauty, compassion and cruelty, it is impossible not to be moved by them – I think everyone who votes has a tough decision to make!’ Scroll down to see the contenders – which gets your vote?

When German photographer Stefan Christmann came across this penguin couple in Atka Bay, Antarctica, seemingly with an egg, he was surprised as it was too early in the season for egg-laying. However, upon closer inspection, he discovered the egg was a snowball and wondered if the diligent couple were practising egg transfer in preparation for when their real egg arrived. Stefan claims it’s possibly the first time it has ever been witnessed and documented

This image, called ‘losing the fight’, was captured by British photographer Aaron Gekoski. It shows an orangutan that has been used in a degrading performance in Bangkok. The shows were temporarily stopped in 2004 due to international pressure, but today the shows continue – twice a day, every day – with hundreds of people paying to watch the orangutans box, dance, play the drums and more 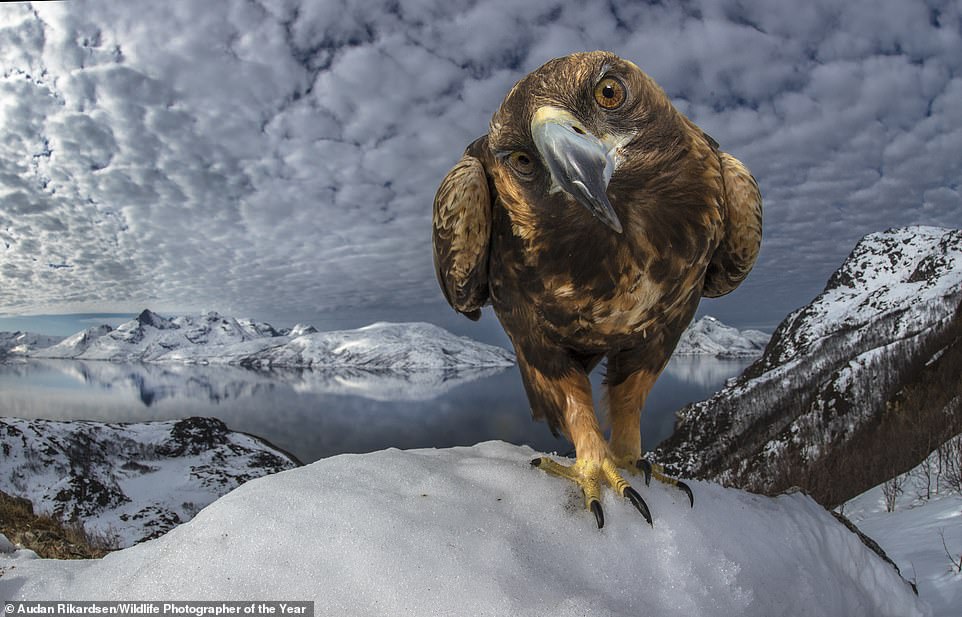 It took three years of planning by Norwegian photographer Audan Rikardsen to capture this image of a majestic bird of prey in its coastal environment. He snapped the shot from a hide on the coast of northern Norway 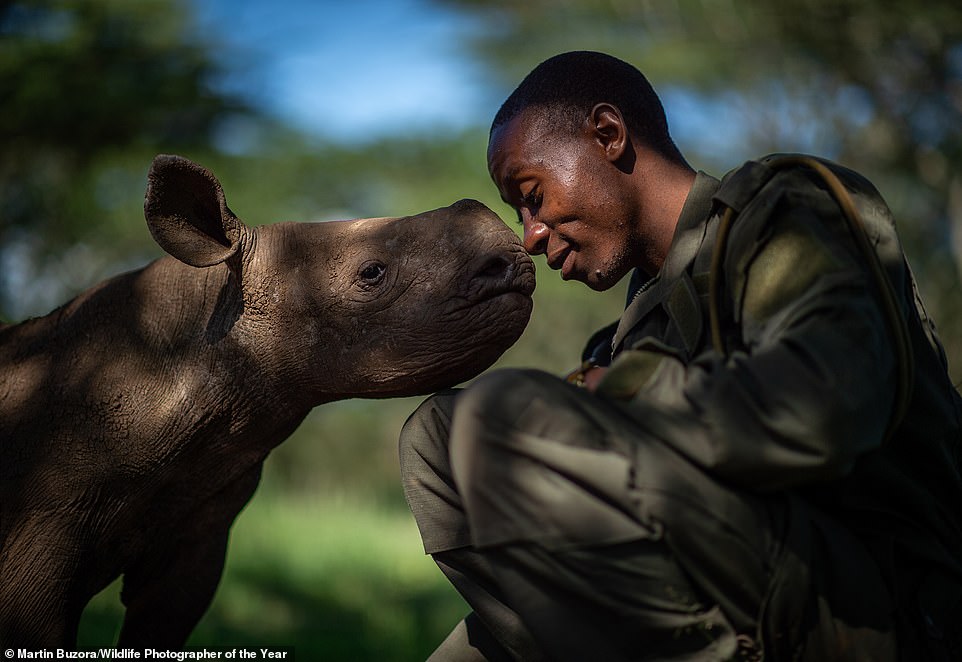 Canadian photographer Martin Buzora captured this heartwarming shot. It shows Elias Mugambi, a ranger at Lewa Wildlife Conservancy in northern Kenya with orphaned black rhino Kitui. Elias often spends weeks away from his family caring for orphaned black rhinos. The young animals are in the sanctuary as a result of poaching or because their mothers are blind and cannot care for them safely in the wild 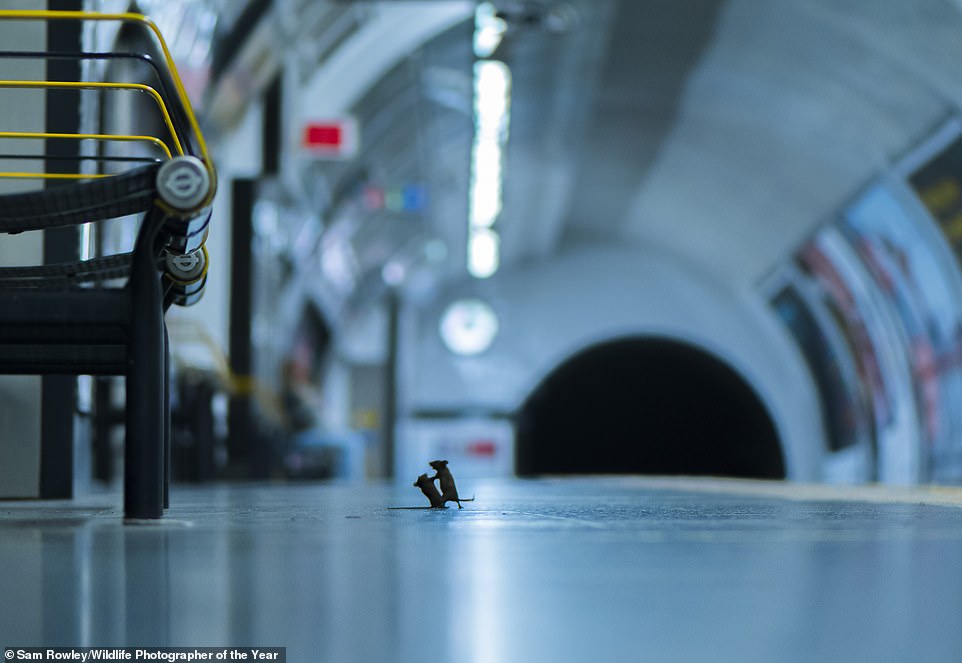 UK-based photographer Sam Rowley shot this fascinating image, which he calls ‘station squabble’. He discovered the best way to photograph the mice inhabiting London’s Underground was to lie on the platform and wait. He only saw them fight over scraps of food dropped by passengers a few times, possibly because it is so abundant. This fight lasted a split second before one grabbed a crumb and they went their separate ways 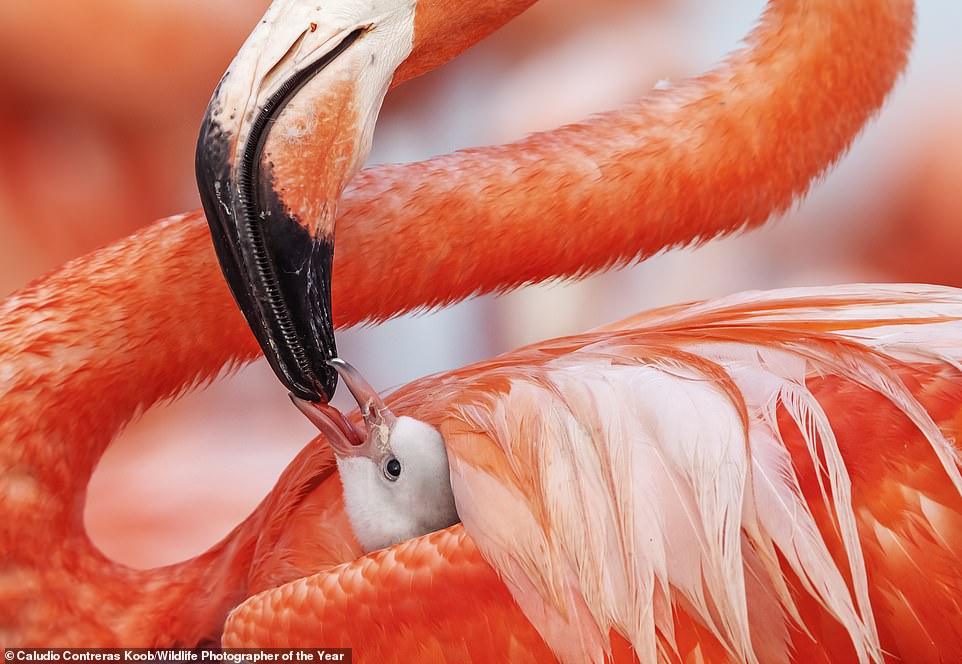 Mexican photographer Caludio Contreras Koob snapped this image in the Ría Lagartos Biosphere Reserve in the state of Yucatán, which is home to Mexico’s largest flock of Caribbean flamingos. Caludio says that the chick in the image is less than five days old, so it will stay in its nest less than a week before it joins a crèche of other youngsters who wander around the colony searching for food 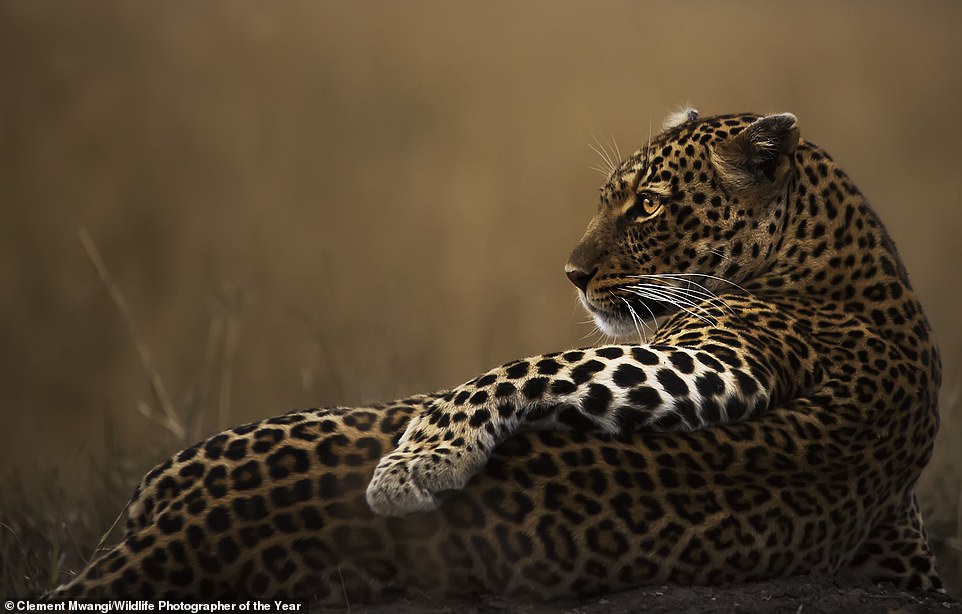 In Kenya’s Maasai Mara National Reserve, photographer Clement Mwangi spent time observing this beautiful leopard as she soaked up the last warm rays of the setting sun. Clement says he is mindful to remember to take pleasure in life’s simple moments – being all too aware that sometimes, as a wildlife photographer, you can miss the exceptional while looking for the unusual 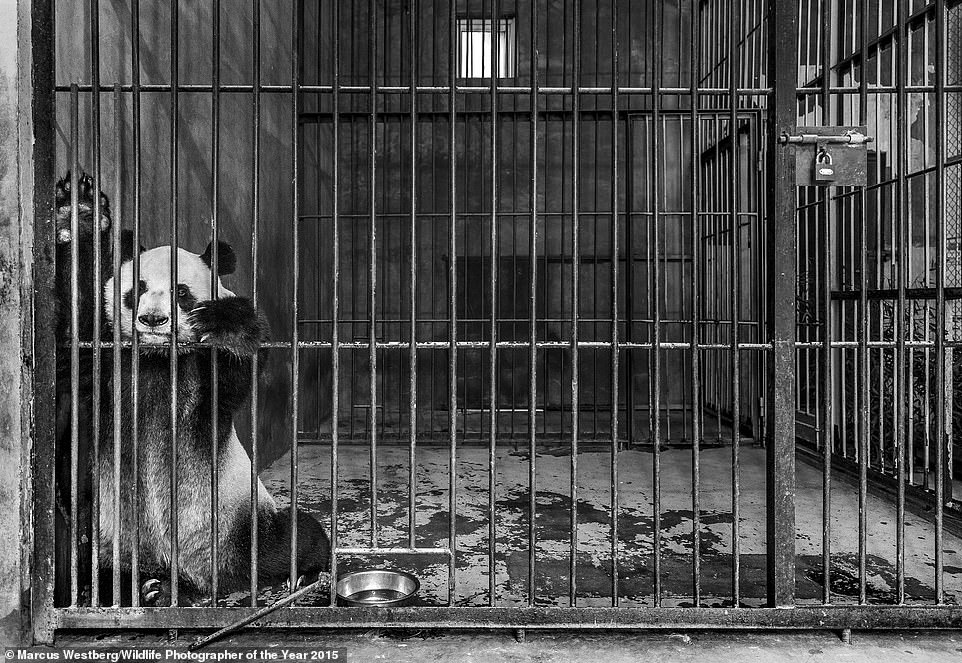 Swedish photographer Marcus Wesberg shot this heartbreaking image. It’s called ‘captive’ and shows a giant panda sitting in a cage at a breeding centre in Shaanxi, China. He says that with a growing wild population and no realistic plan of how to breed and raise pandas for re-release into the wild rather than a life in captivity – not to mention lack of habitat being the largest barrier to the continued spread of the wild population – it is unclear how such centres will benefit the species 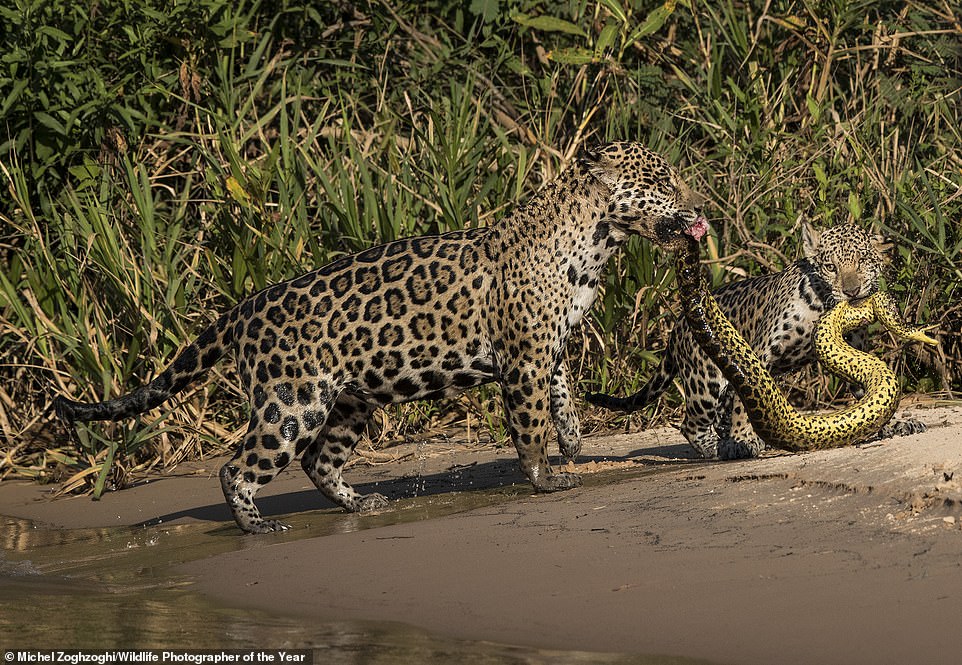 Michel Zoghzoghi from Lebanon shot this stunning image of a mother jaguar and her cub in the Pantanal region in Brazil. He calls it ‘matching outfits’ and says he captured it while on a boat on the Três Irmãos River. The felines swam right in front of the vessel and he says he watched mesmerized as they left the water holding an anaconda with a very similar pattern to their own

Michael Schober was in the Hohe Tauren National Park in Austria when he shot this image of a group of marmots at close range. He says that the animals have become accustomed to the presence of humans and it is beneficial to them as human company deters predators such as golden eagles 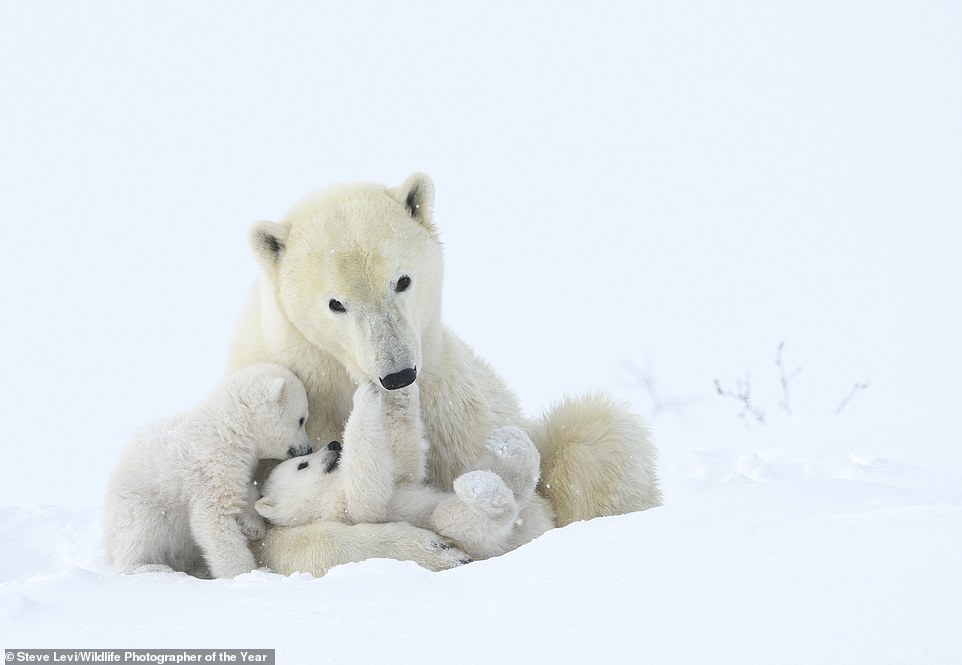 It took American photographer Steve Levi 10 days of looking to spot this mother polar bear and her two cubs in Wapusk National Park in Canada. The creatures had recently left their birthing den to begin the long journey to the sea ice so the mother could feed. Steve said that after a nap, the cubs were in a playful mood 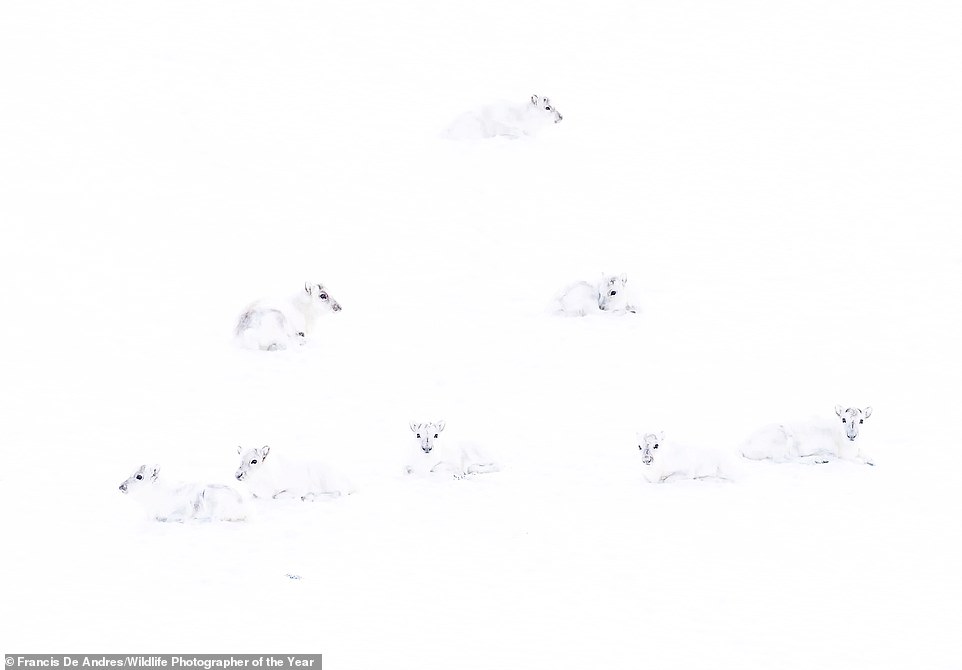 Spanish photographer Francis De Andres shot this mesmerising image in the Norwegian archipelago of Svalbard and called it ‘spot the reindeer’. Conditions for photography there are extreme but the wildlife has adapted to the environment and its freezing temperatures. Francis found this composition of white arctic reindeer, which were observing him, both curious and charming 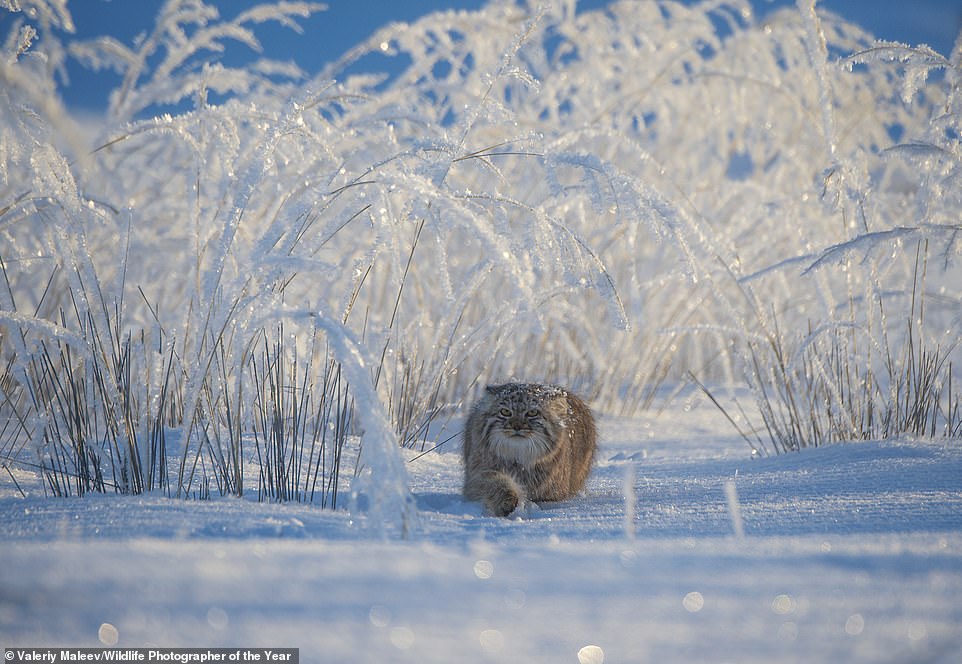 Russian photographer Valeriy Maleev encountered this Pallas’s cat while it was out hunting in the Mongolian grasslands. It was -42°C (-44°F) on that frosty day, but Valeriy says the fairy-tale scene cancelled out the cold. Pallas’s cats are no bigger than a domestic cat and they stalk small rodents, birds and occasionally insects 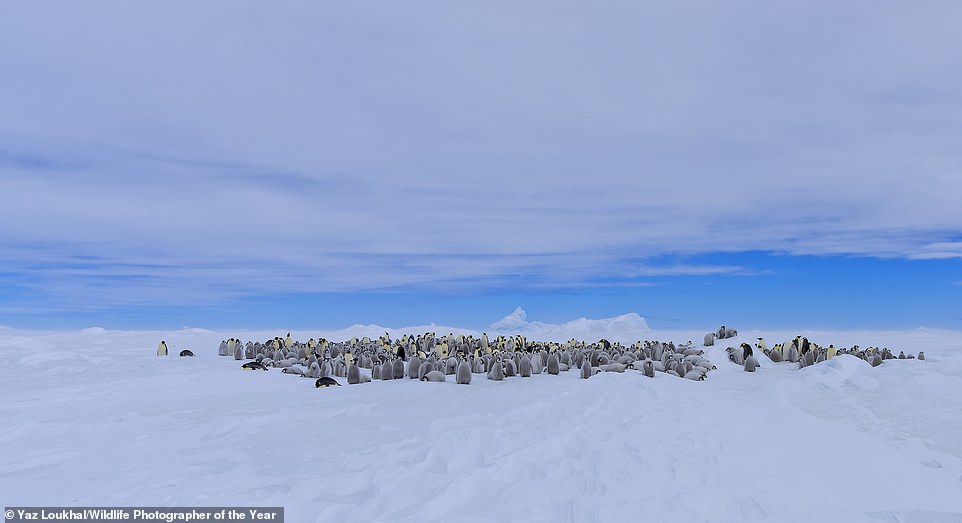 After a rough journey by sea to the remote Snow Hill Island off the east coast of the Antarctic Peninsula, French photographer Yaz Loukhal flew by helicopter and then trekked through thick snow to reach this emperor penguin colony. His efforts were rewarded with this incredible view of the whole colony 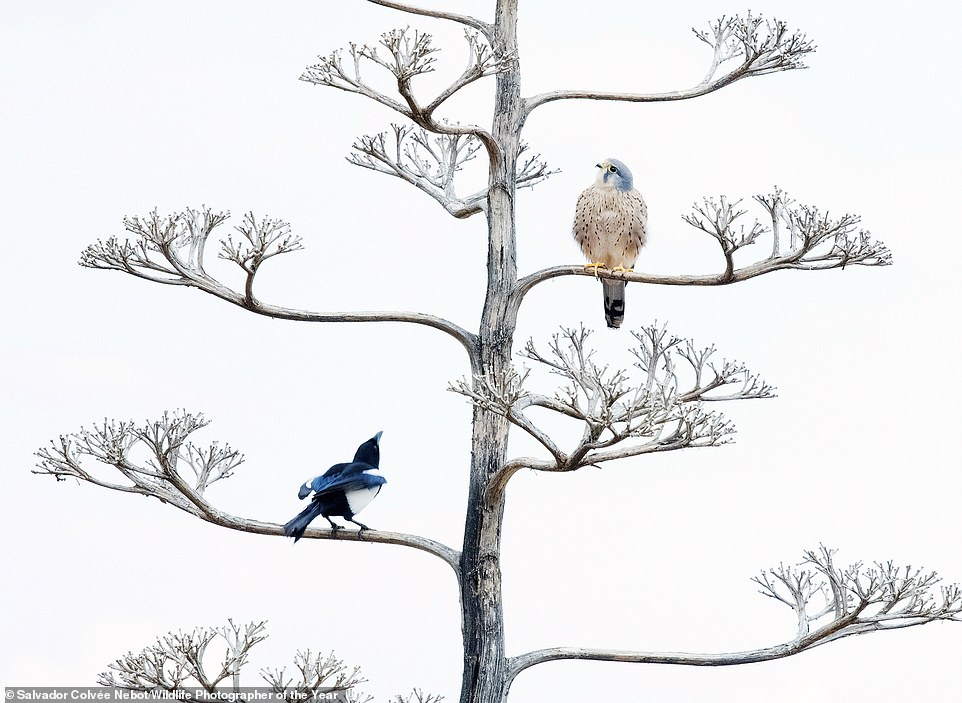 Over several months, Salvador Colvée Nebot, from Spain, watched different species of bird use the dead flower spike of an agave in Valencia, Spain, as a perch before descending to a small pond to drink. A pair of common kestrels were frequent visitors though each time they came, magpies would hassle them 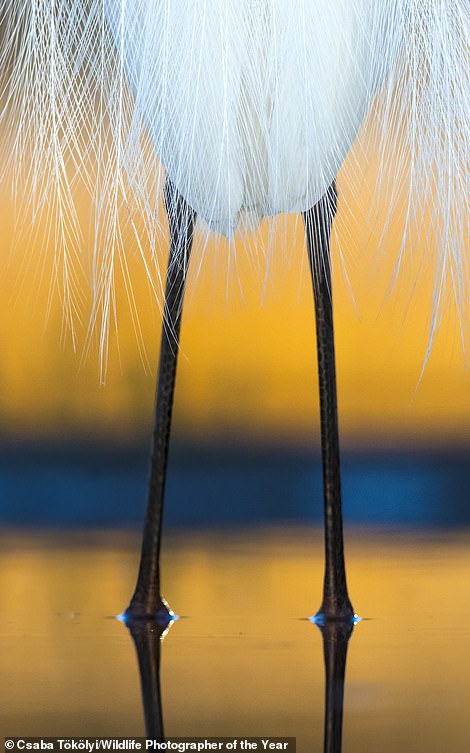 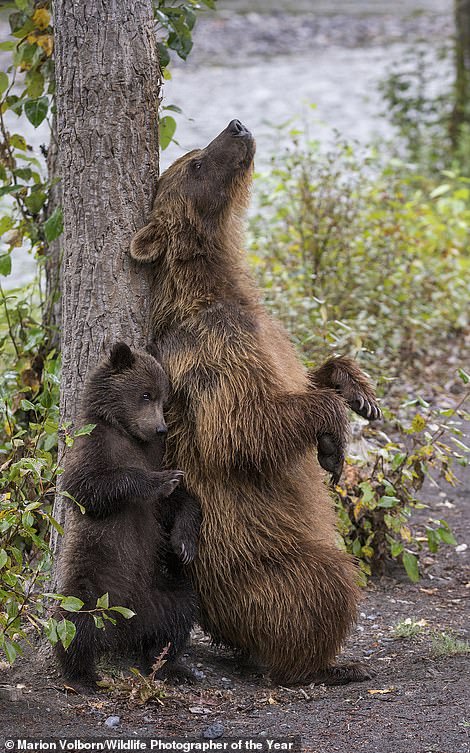 Hungarian photographer Csaba Tökölyi had been in a hide all night in his home country photographing nocturnal species and their activities, but as the golden light of dawn reflected on the surface of the water, an egret, left, in wonderful breeding plumage stopped close by. He said that its elongated scapular feathers covered the bird as if it was wearing a gown. Pictured right is a shot by German photographer Marion Volborn, who spotted a grizzly bear and her young cub approach a tree while on a bear watching trip to the Nakina River in British Columbia, Canada. The mother bear started to rub against the tree trunk and the cub imitated her 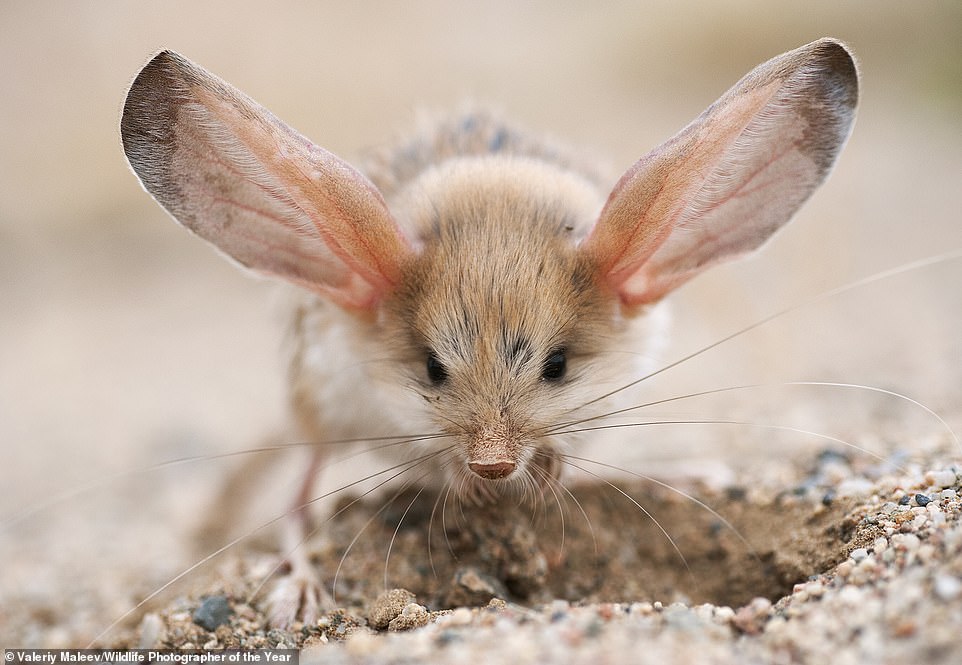 Russian photographer Valeriy Mallev was on a summer expedition to the Mongolian part of the Gobi Desert when he happened upon a long-eared jerboa. As blood moves through the ears of these usually nocturnal animals, excess heat dissipates across the skin and the jerboa is able to stay cool 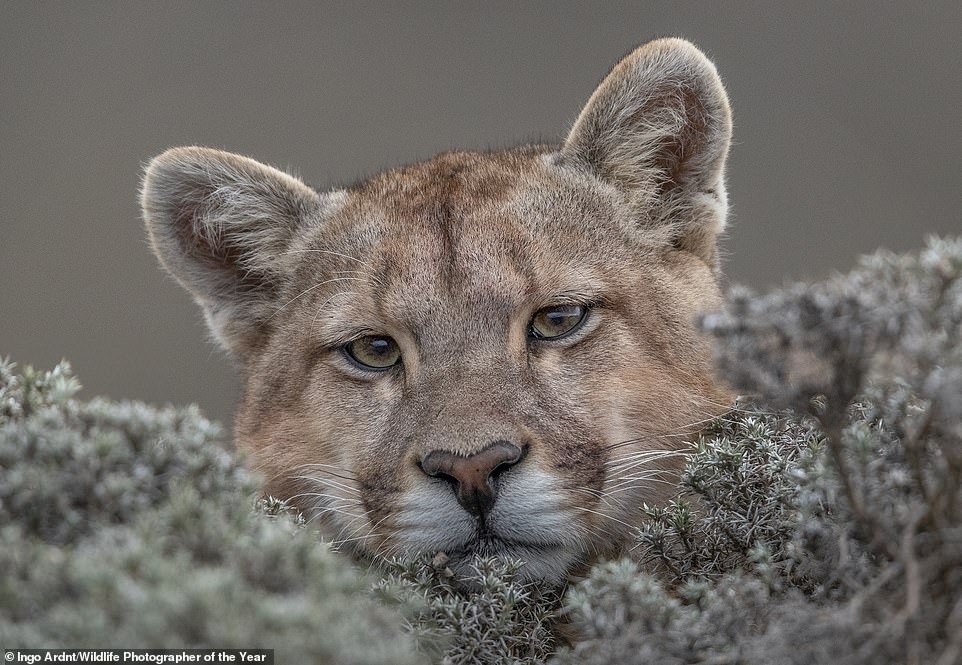 For over two years, German photographer Ingo Arndt has followed the pumas of Torres del Paine National Park in Patagonia, Chile. This female was so used to his presence that one day she fell asleep nearby. On awakening, she glanced at him in a familiar way, and he was able to capture this portrait of a completely relaxed puma 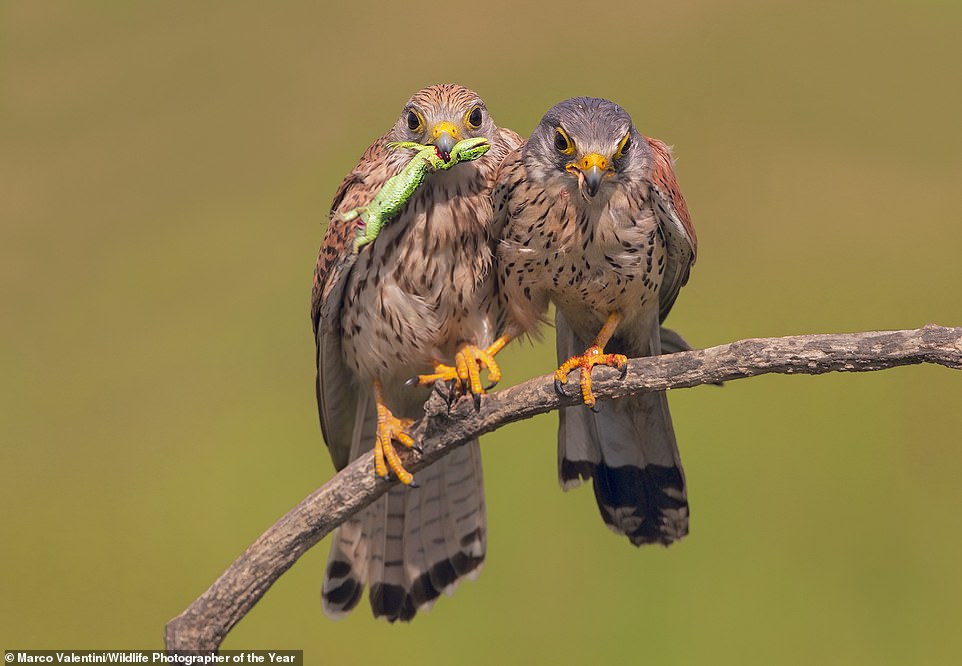 Italian photographer Marco Valentini was in Hortobágyi National Park, Hungary, when he spotted these kestrels displaying typical courtship behaviour. Here the female has just recovered an offering of a young green lizard from her suitor and in this touching moment she tenderly took hold of his claw 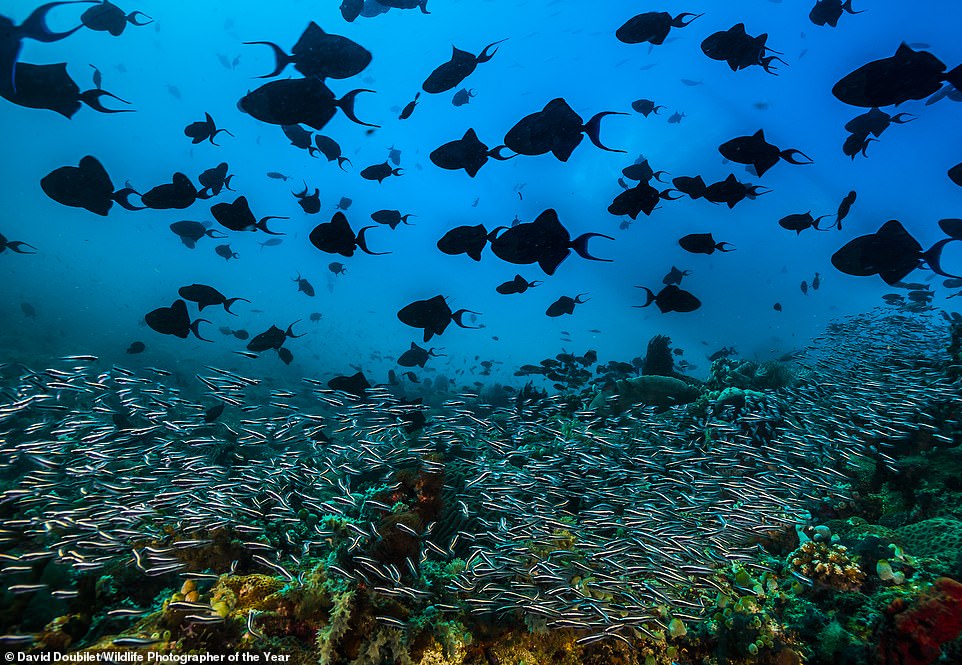 A school of red tooth triggerfish forms a cloud of silhouettes above a river of convict blennies flowing over the coral in Verde Island Passage, Philippines. The Passage, a strait that separates the islands of Luzon and Mindoro, is one of the most productive marine ecosystems in the world. The stunning shot was captured by US photographer David Doubiltet 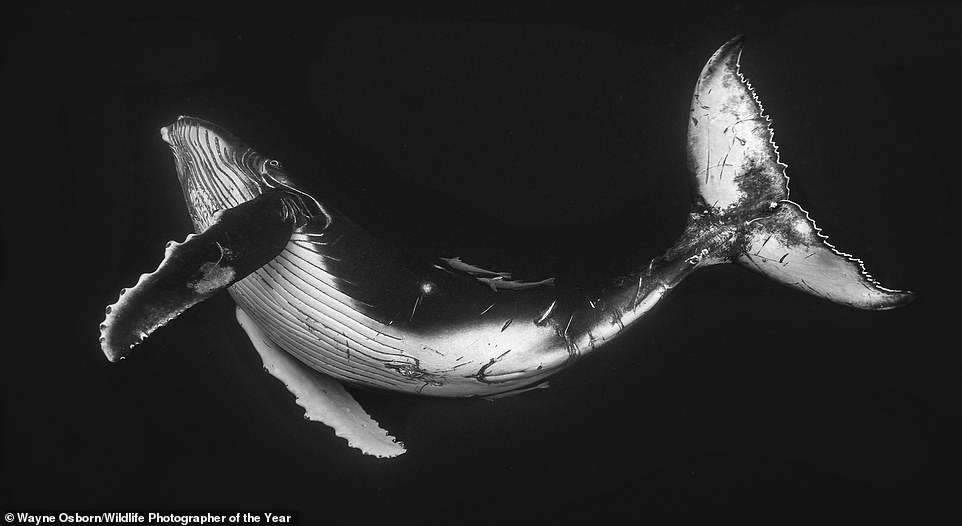 Australian snapper Wayne Osbourn spotted this male humpback calf and its mother while diving off the Vava’u Island group in the Kingdom of Tonga. The calf kept a curious eye on Wayne as it twisted and turned before returning to its mother periodically to suckle. She was relaxed and motionless 20 metres (65 feet) below the surface 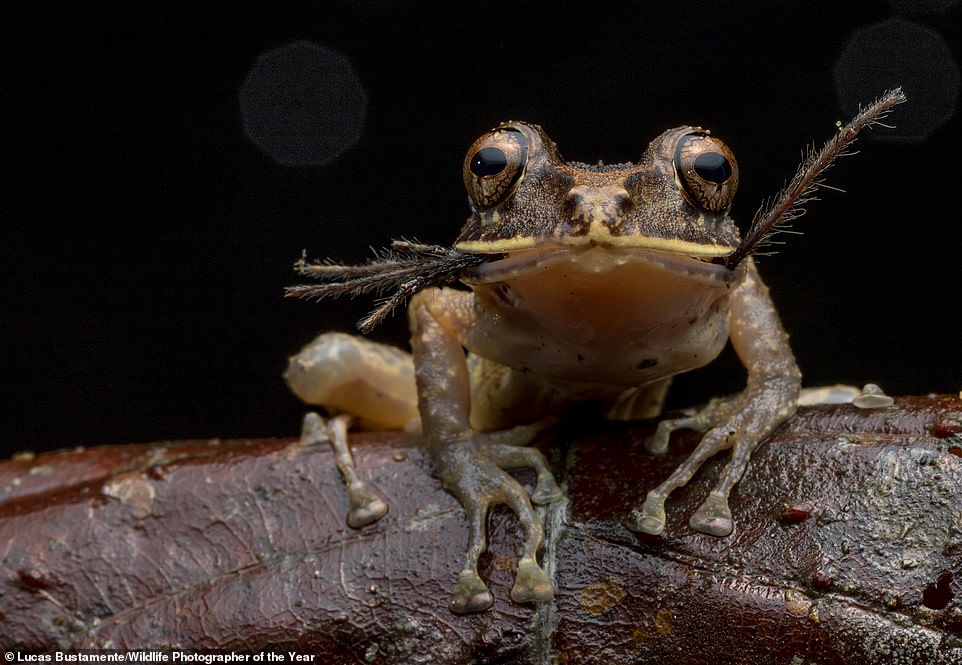 Night hikes through the Ecuadorian jungle are one of photographer Lucas Bustamente’s favourite activities. With a keen interest in herpetology, he was overjoyed to spot this labiated rainfrog, a species that’s abundant in the region. It had just caught a baby tarantula and he says that its comical expression said ‘caught in the act’ 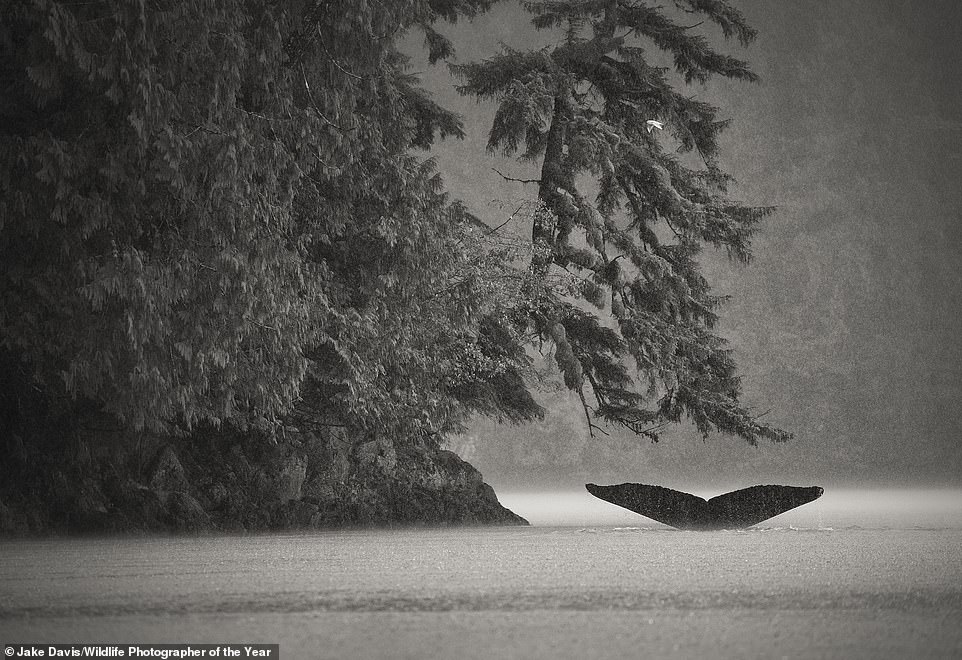 Jake Davis from the US was on a boat off the coast of Great Bear Rainforest in British Columbia, Canada, where he watched humpback whales bubble-net feeding. Here the leader whale dives to locate the fish. Once the fish are located, the rest of the pod swim in decreasing circles while blowing bubbles that create a net, trapping the fish 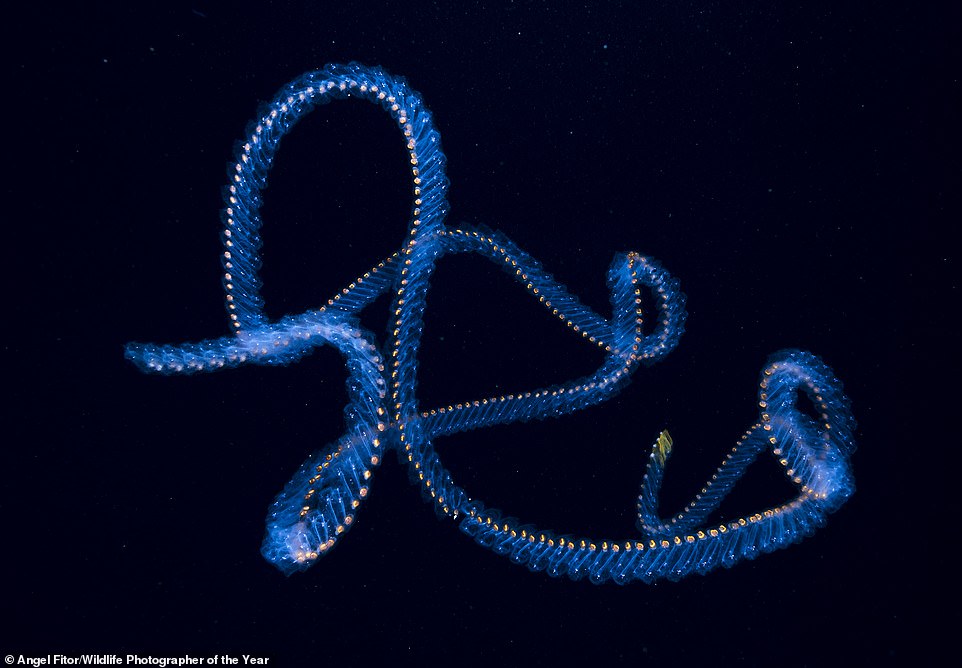 Angel Fitor took this image in the waters off Alicante, Spain. Immersed in a strong current, an otherwise slightly undulating salp chain twists and turns forming whimsical shapes. Salps move by contracting, which pumps water through their gelatinous bodies