Stuntmen wreathed in flames plunge from atop towers, mysterious priests vanish into thin air, a herd of cattle stampedes across the battlefield and there is even time for a wedding . . . all in the space of 30 breathless minutes. 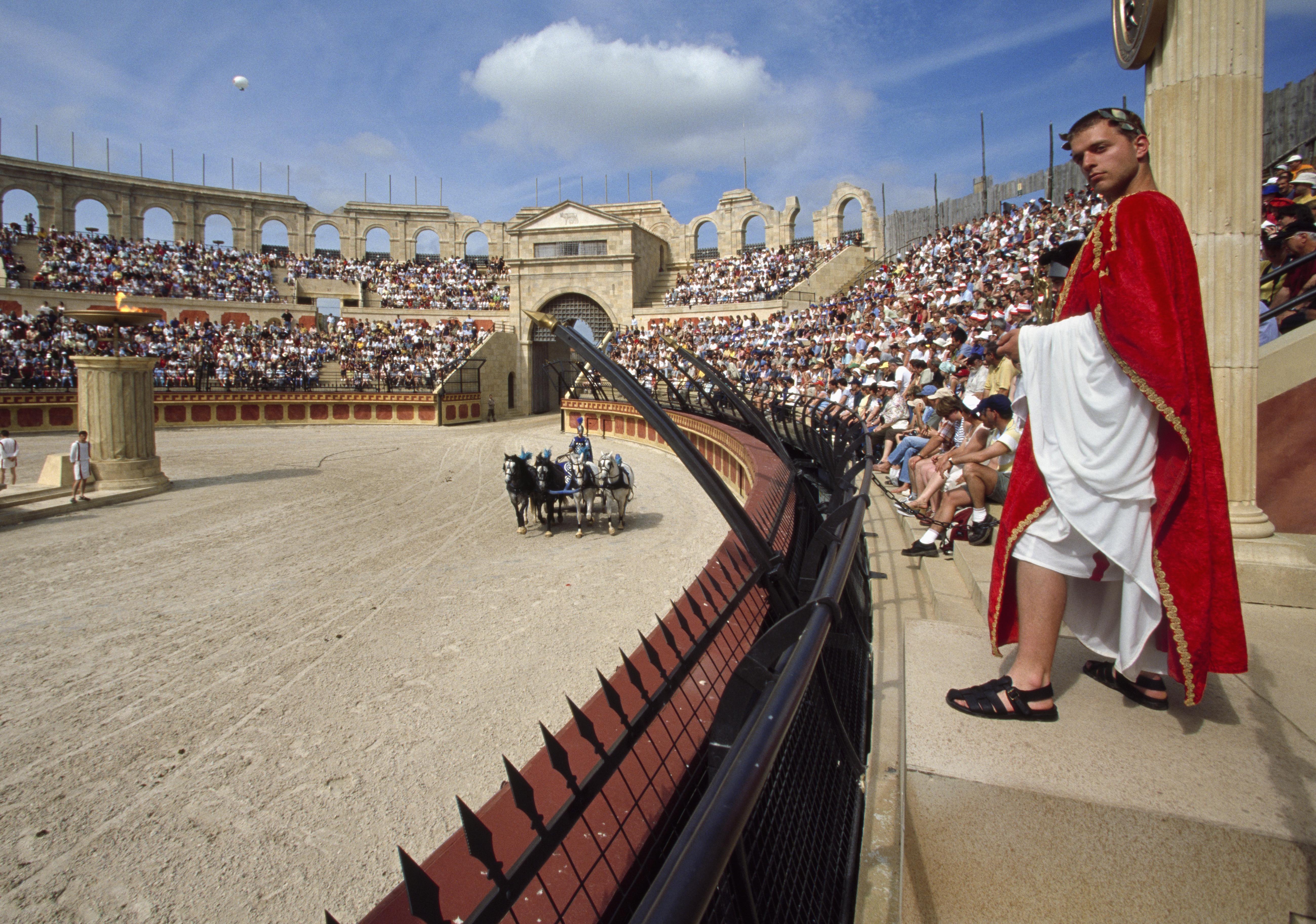 My kids — Charlotte, eight, and her five-year-old brother Leo — sit open-mouthed in wonder.

This is the third historical spectacular they have watched today and it doesn’t look like the novelty will wear off any time soon.

This should be no surprise, as there really is nowhere like Puy du Fou.

Set in the Vendee region of France, it is the country’s second-biggest theme park behind Disney — and is about as far from the jolly capers of Mickey and his chums as you could imagine. 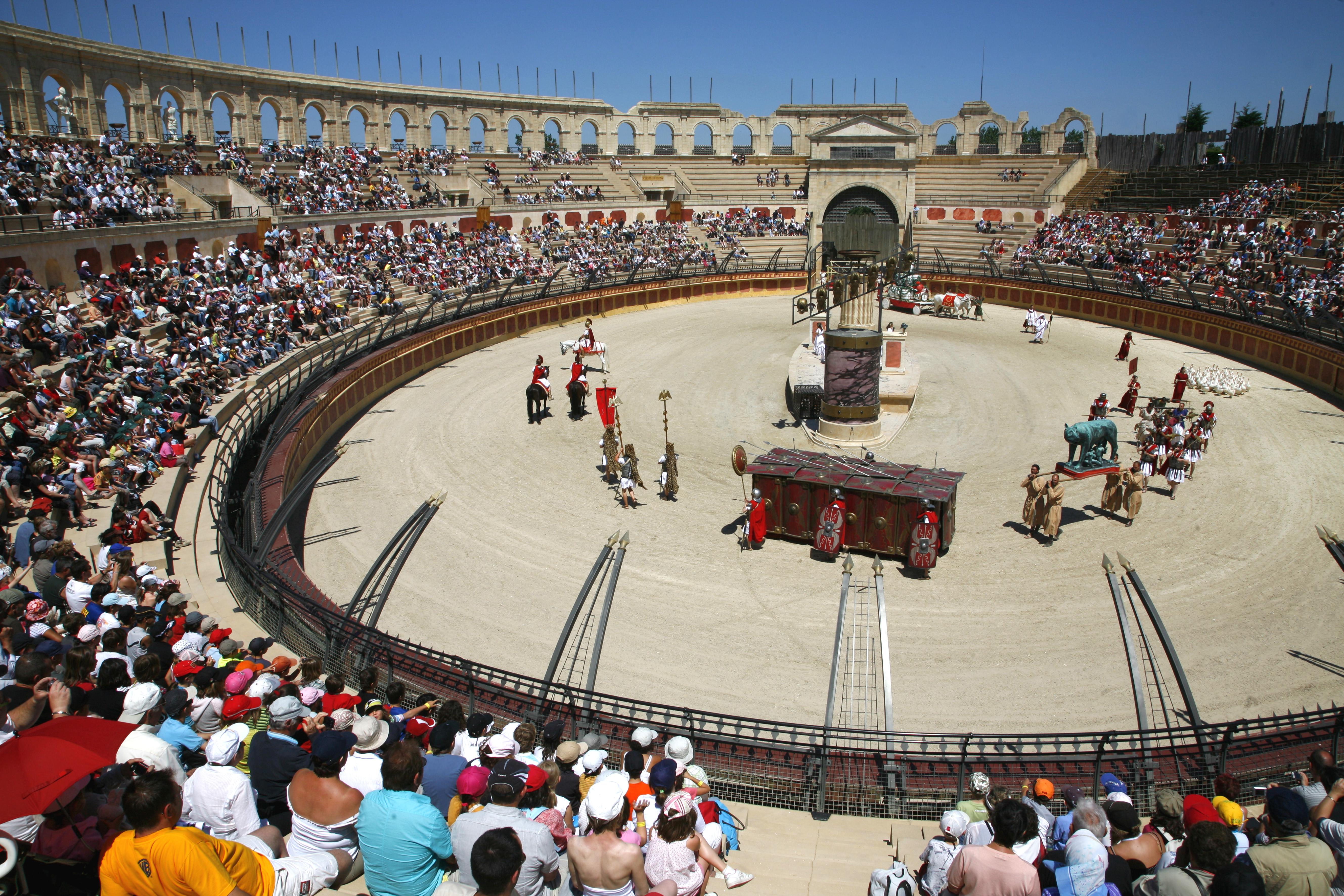 For a start, there are no rides. Instead, the 140-acre site is devoted to recreating different historical eras, from Roman times up to the 19th century.

You can wander through period villages of thatched cottages and watch artisan craftsmen ply their trades. There are landscaped gardens and walkways lined with statues that come to life.

But what draws more than two million visitors to Puy du Fou every year are the shows.

A packed programme is performed at different venues throughout the day.

Each 30 minutes long or so, they are ideal for fidgety kids and cram in all the special effects and stunts you would expect in a Bond movie. 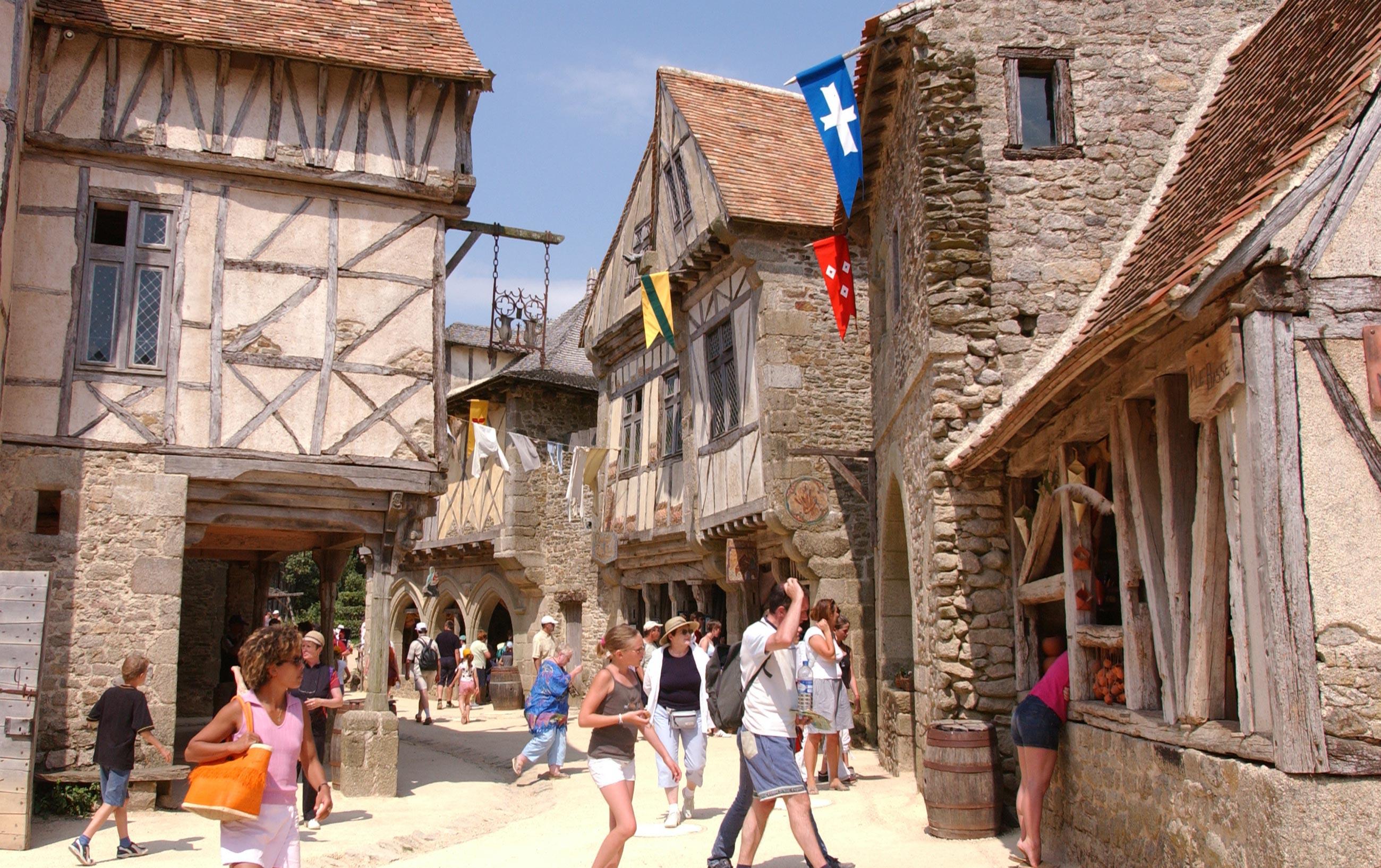 Our first show of the day was Le Bal Des Oiseaux Fantomes — The Ghost Birds’ Dance.

A 3,000-seat, open-air ampitheatre curving round a ruined chateau provides a spectacular backdrop.

We switch on our headsets to translate the French dialogue so we can follow the story about Eleanor of Aquitaine. But the plot plays second fiddle to the real stars of the show — some 200 birds.

Falconers swirl lures round their heads like lassos as birds of prey swoop down at frightening speed. 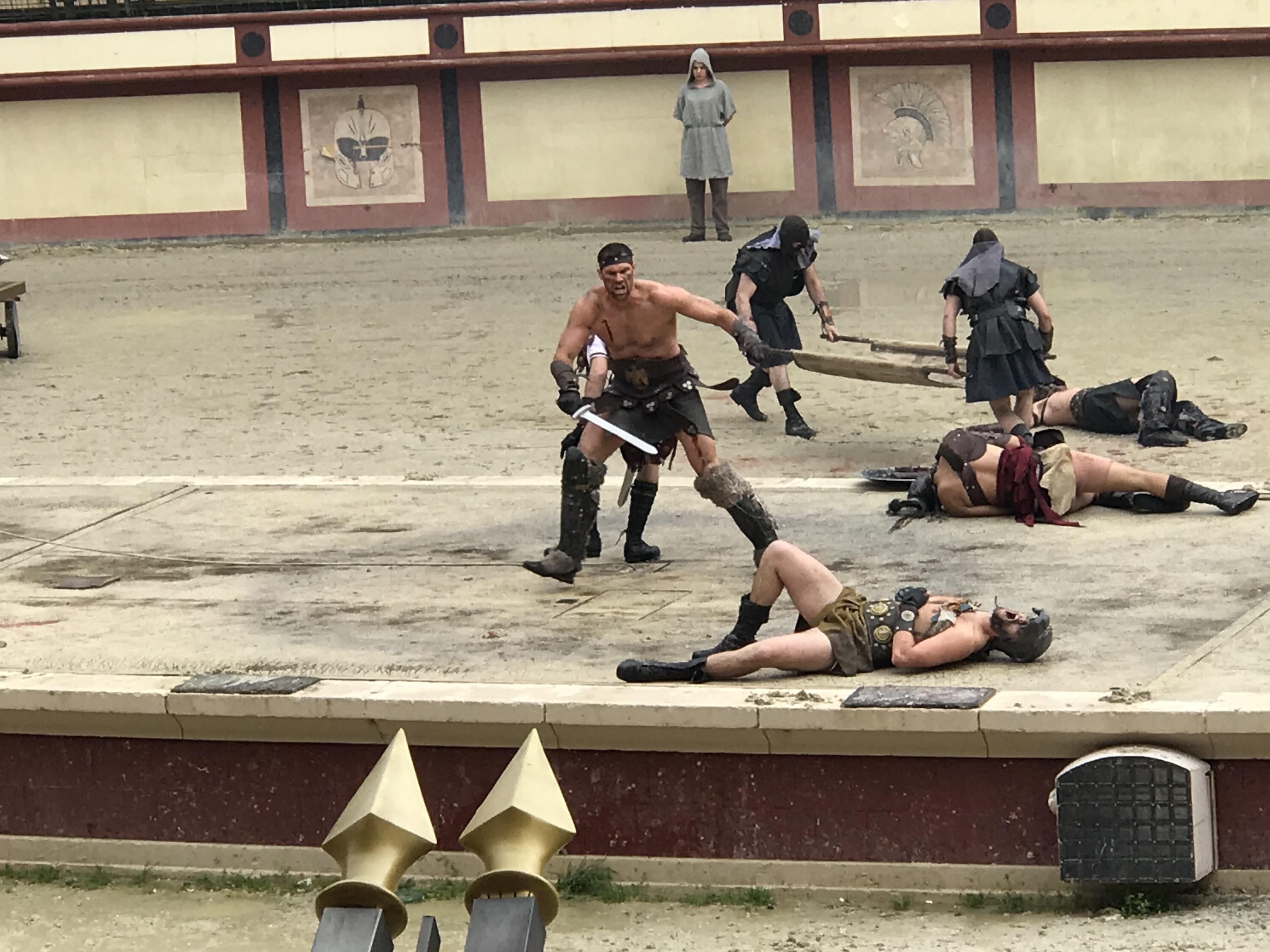 Gangly secretary birds strut across the floor and a flock of owls glide in to perch, Harry-Potter-like, on the ruins around us.

The finale sees all the birds take to the skies at once. Eagles wheel above us and a vulture nearly parts my hair as it sweeps at head-height across the crowd.

Next up is Le Signe du Triomphe, a Roman show set in a vast gladiator arena.

Once we have taken our seats, Caesar and his dignitaries arrive at the same time as a group of rowdy commoners. 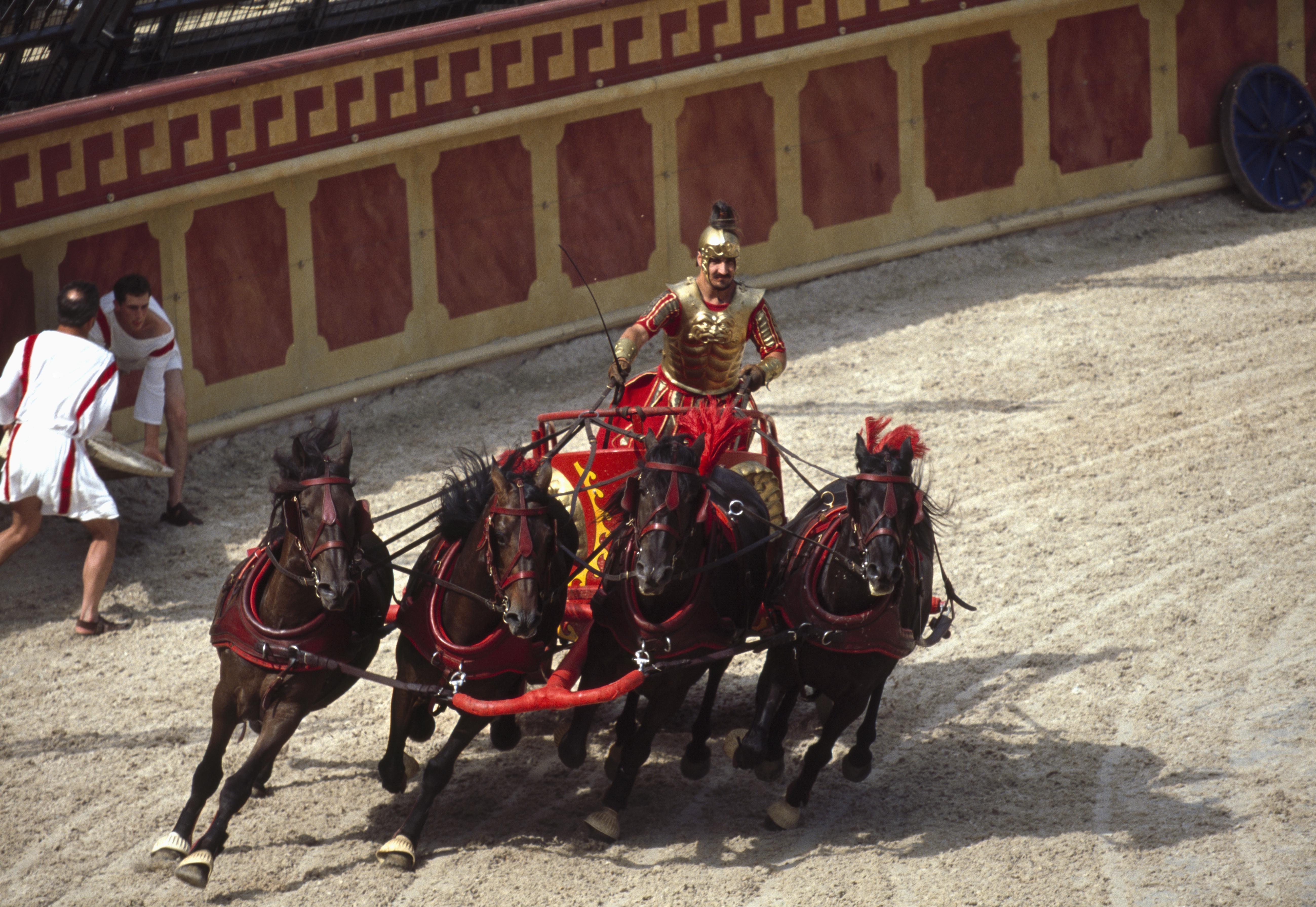 They stand at opposite ends of the stadium whipping up the audience so it starts to feel like a football match.

A group of prisoners have to make it through various trials to win their freedom.

This starts off with vicious gladiator battles and culminates in a thrilling Ben Hur-style chariot race.

The horse-drawn chariots thunder round the track inflicting savage blows on each other.

GETTING THERE: Fly from Luton or Gatwick to Nantes from £49pp return with easyJet.com.
STAYING THERE: A one-night, two-day stay at an on-site hotel including two days’ entry to the park for a family of four is from £288 in total.

A two-night B&B stay at La Citadelle, with two days’ entry to the park for a family of four starts at £495.

Real sparks fly as they collide, wheels fall off and a rider is dragged from the arena by his foot after getting entangled in his horse’s reins.

Before we have caught our breath we are filing into one of Puy du Fou’s “immersive experiences”. Unlike the shows, these are permanent attractions that you can walk through, similar to a British funfair’s haunted house. 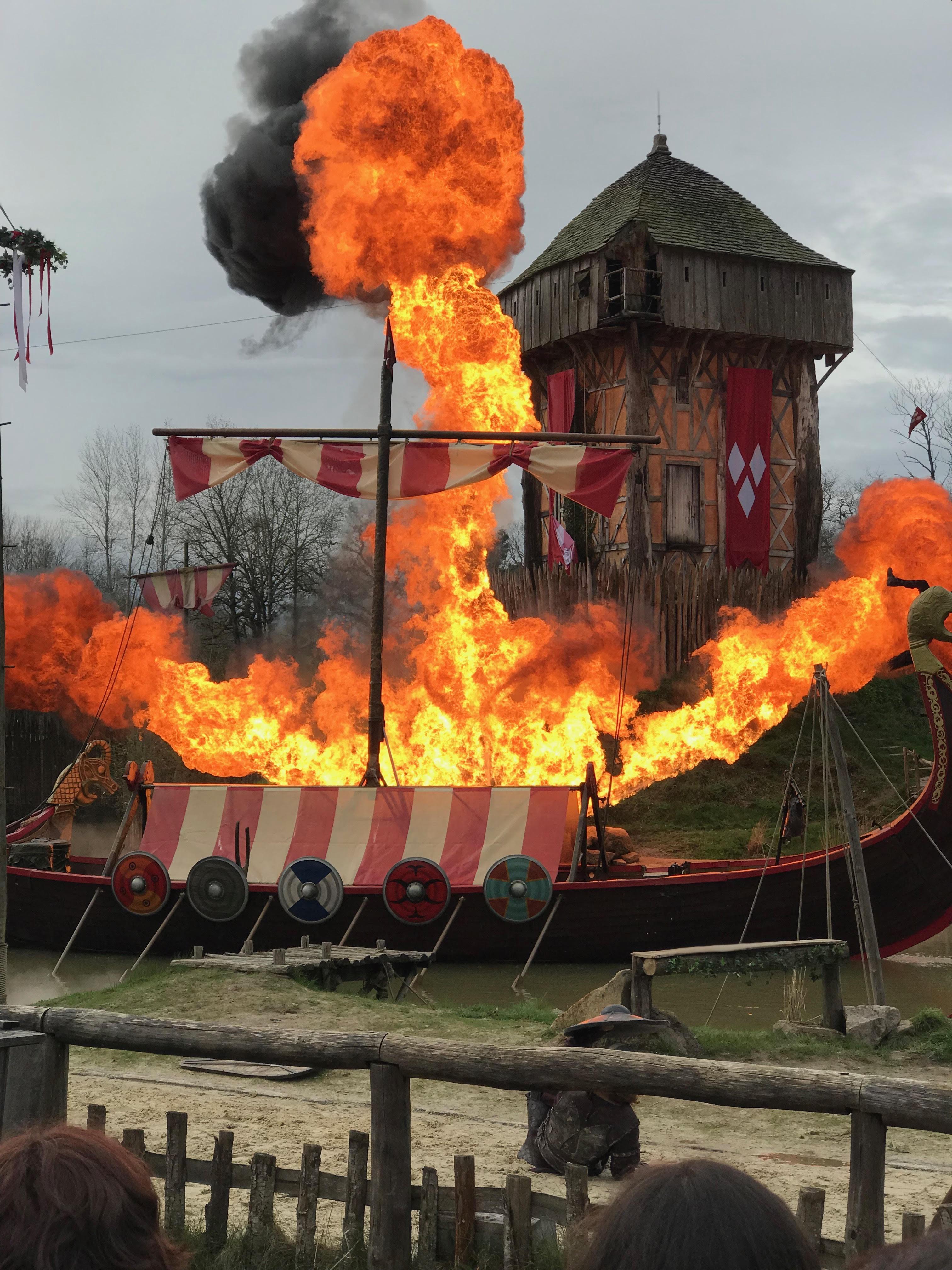 One of the park’s most recent additions is Le Mystere De La Perouse, following the adventures of a doomed explorer whose ship vanished in the Pacific after a four-year expedition in 1788.

As we wander through increasingly gloomy corridors, the walls and ceiling move, giving the impression of being in the hold of a boat buffeted by waves. It is so convincing I have to hang on to a railing to keep my feet.

The experience is heightened by extras in period costume huddling over maps and shouting orders.

Easter Island is visible on the horizon through a porthole then, round another corner, the temperature suddenly drops as icebergs hove into view. 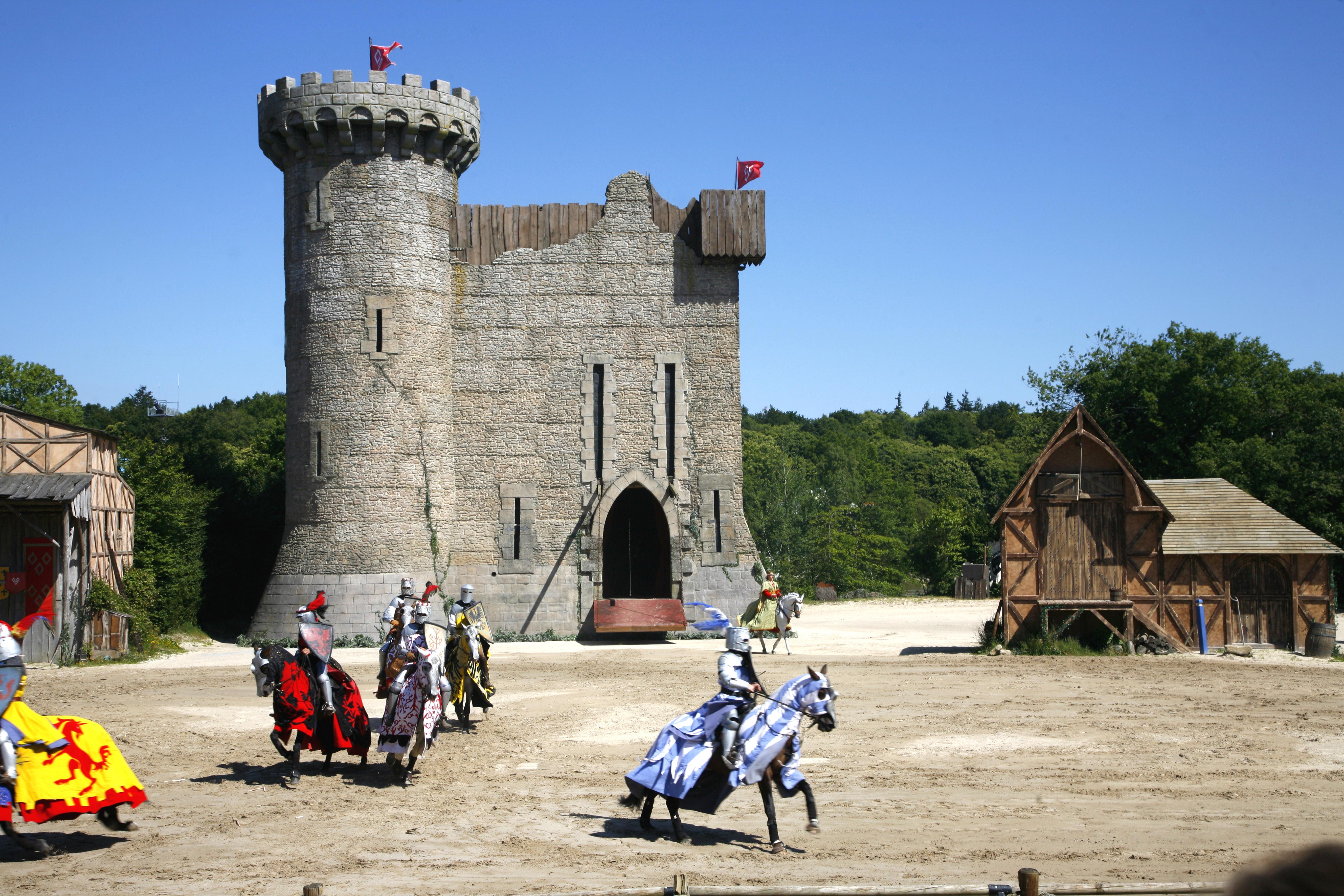 Water gushes around our feet through gaping holes in the hull and fountains shoot above our heads to recreate the expedition’s final desperate moments.

It is impossible to see everything Puy du Fou has to offer in one day and if you want to extend your visit, there are five on-site hotels, all themed around various historical ages.

We stayed at the recently opened La Citadelle, based on a medieval castle.

Barrels and farming equipment are scattered round the rustic courtyard and the receptionists are dressed like Rapunzel. 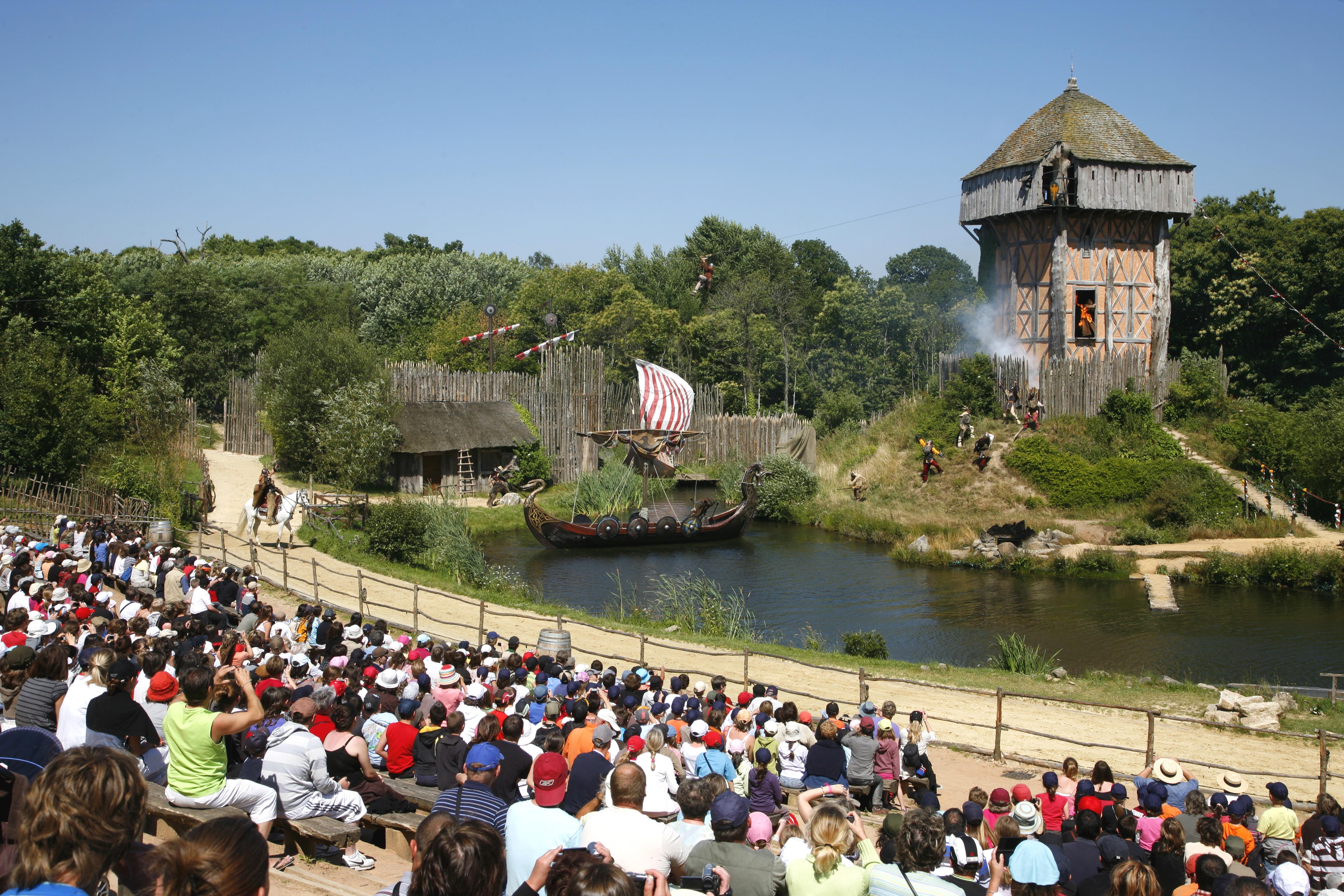 The rooms are similarly themed in dark wood with flickering lamps hanging from chains. But there’s nothing medieval about the facilities. It is like staying at Winterfell with free wifi.

We finish our trip with the lakeside night show Les Orgues de Feu.

As classical music plays, an eerie violinist in a neon gown glides across the water. 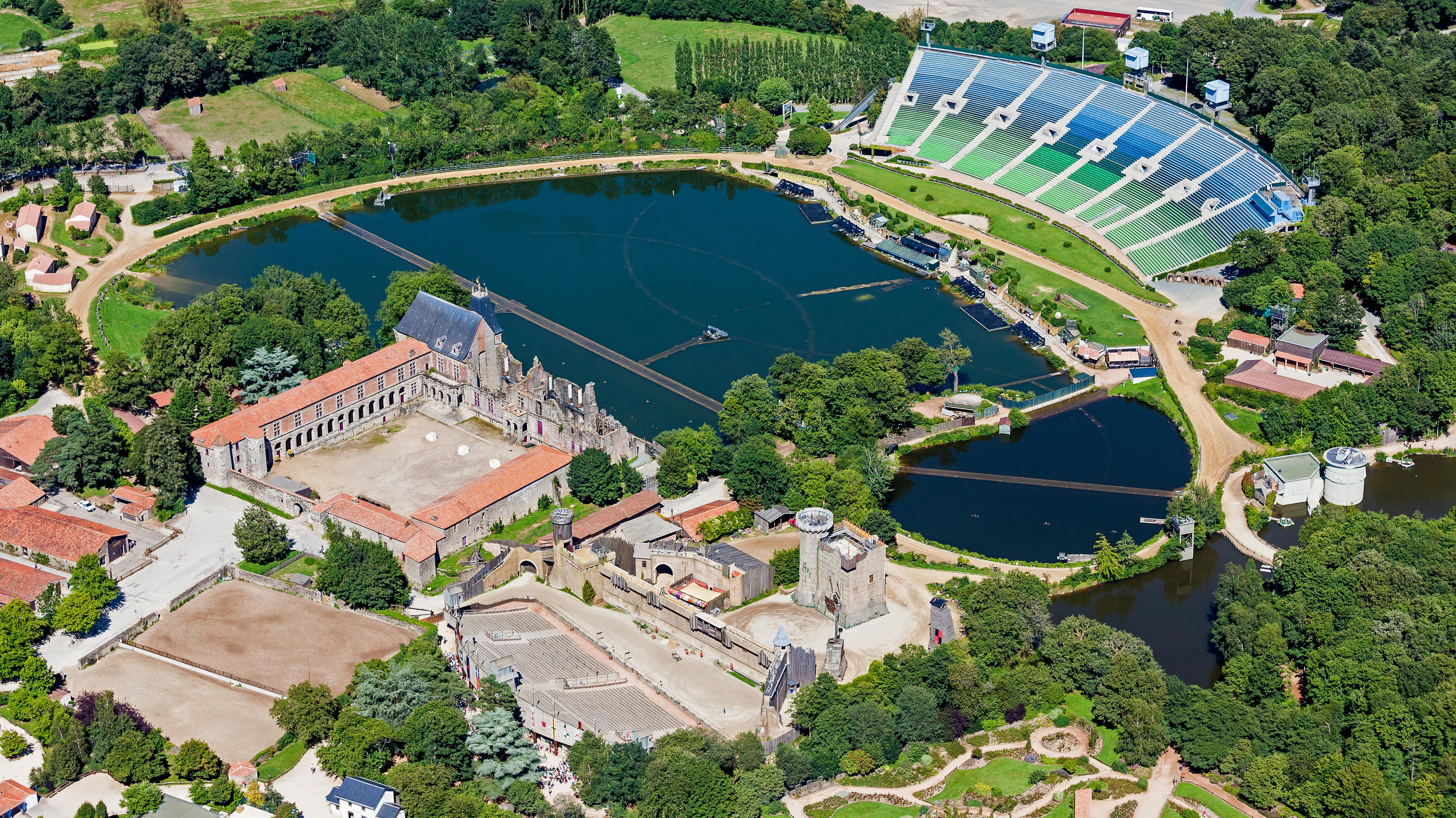 She is joined by a ghostly pianist whose notes are mirrored by illuminated fountains.

The epic conclusion sees an enormous pipe organ rising out of the water and flames shooting into the air from the mouths of golden dragons.

With so much to keep families entertained, it is difficult to fathom why Puy du Fou is unknown to most Brits. After being in business for 40 years, only 15 per cent of visitors are foreign tourists.

Its most ringing endorsement came from our children, who arrived home with their heads swimming with heroic tales of knights and wizards, full of questions about Romans and Vikings.

And not a pair of Mickey Mouse ears in sight.