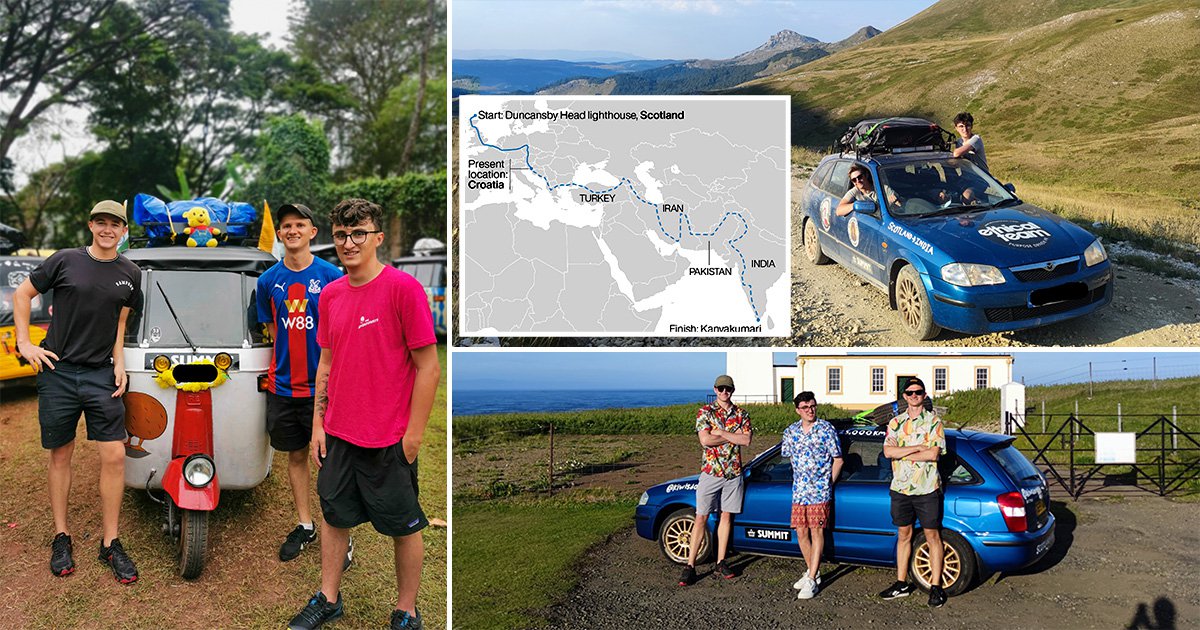 It’s an epic motoring adventure that Jeremy Clarkson and his mates would be proud of.

Armed with a GPS, sleeping bags and seven pairs of boxers each, friends Daniel Patton, 22, Joe Fisher, 23, and Callum Kitson, 23, have driven more than 11,800 miles from north-east Scotland to Iran in a 1999 blue Mazda.

The trio then double backed to Turkey where they parked the tiny car – which had no air conditioning – and flew to Kochi in the south of India.

There, they finished off their trip with a 1700 mile journey in a rickshaw which they described as a ‘lawnmower on wheels.’

The friends, who were all born in the UK before emigrating with their families to New Zealand, dubbed themselves the Kiwis Don’t Fly rally team. They attempted the mammoth journey to raise money for those affected by the conflict in Ukraine.

Business graduate Daniel, who was born in Bristol, said: ‘This has been the experience of a lifetime, we have learned about cultures we would have never known about.

‘It’s certainly been inconvenient. We had breakdowns, we had long waits at borders, and then the floods in Pakistan made us change our plans.

‘But it’s been a massive adventure and we’ve seen a side of these countries you wouldn’t see on the tourist trail.’

The idea for the ‘slightly stupid’ trip came to the boys during lockdown.

They bought the Mazda in June 2022 from a car dealership in Leeds after deciding it was ‘completely unsuitable and perfect’ and budgeted to spend roughly £18,000 over the duration of the trip for the car, fuel, food, accommodation, visas and repairs.

The friends, who met at secondary school, mapped out journey spanning 20 countries – setting off from Duncansby Head lighthouse in Scotland on July 11.

Daniel said: ‘We were very surprised by how well the car worked. From high altitudes to deserts in Iran.

‘It’s a 1999 Mazda which was passed its expiry date but it was just brilliant.

‘Having no air-conditioning in Iran was definitely an experience, but it was better than we could have ever hoped for.’

For Daniel, the highlight of the trip was traversing the treacherous ‘death road’ in north-east Turkey, dubbed the world’s most dangerous road, which spans roughly 111 miles from the Black Sea to Askale in eastern Turkey.

‘It was just fantastic, a road just made of gravel, it was extreme and not something you should be driving an old Mazda on. But that’s exactly why we took on this challenge,’ he said.

‘It was nothing like driving on the M5, and the views were just breath-taking.’

For Callum, a law student born in Poole, spending three weeks in Iran was a standout moment, which he said was the friendliest country they visited.

He said: ‘Meeting people in Iran and Turkey was the highlight for me. Everyone was so hospitable, and we got invited to have tea from strangers.

‘People wanted to show us their cities. It was really quite eye-opening.’

Joe, originally from Croydon, quit his job as an English teacher to join the trip. He loved seeing the hot air balloons in Cappadocia, Turkey.

He added: ‘We woke up at around 4am to see it, but it was just spectacular. It’s really surreal to see hundreds and hundreds of hot air balloons floating through this beautiful backdrop.

‘It’s something you almost need to see to believe.’

The Kiwis Don’t Fly boys had originally planned to drive all the way to India – until their plans were dashed when devastating floods in Pakistan meant they could drive no further.

Daniel said: ‘When we got to Iran, we realised that we wouldn’t be able to travel through Pakistan to India because of the devastating floods.

‘When you travel the way we have, you become really immersed in the local communities, and seeing what was happening in Pakistan was truly heartbreaking.’

Despite the setback, the adventurers were invited by expedition organisers, The Adventurist, to India, where they organised a 1,700-mile rally in a 55 horsepower rickshaw.

They set off in their rickshaw from Kochi on September 11, and reached Jaisalmer, in northern India, by September 25.

The friends added: ‘It’s an amazing way to see India and we’re so glad we did it.

‘We were constantly bouncing around, it was like a rollercoaster, and somehow even more ridiculous than the Mazda.’

More than two and a half months after they first set out, the boys have clocked up more than 11,800 miles on the road and travelled through 19 countries – the UK, France, Belgium, Luxemburg, Germany, Czech Republic, Austria, Slovenia, Croatia, Bosnia and Herzegovina, Montenegro, Albania, Greece, Macedonia, Turkey, Georgia, Azerbaijan, Iran and finally India.

They said they saved most on accommodation, as they slept beneath the stars in sleeping bags near their parked car.

And the team hope their efforts have made a difference both to the people of Ukraine and Pakistan.

They said: ‘When you see the world this way, you can’t help but feel connected with everyone. We hope to continue to raise money and awareness, because what is happening in Ukraine and in Pakistan is just devastating.’

You can follow their adventures on Instagram and TikTok at @kiwisdontfly and support their fundraiser here: www.justgiving.com/fundraising/kiwis-dont-fly