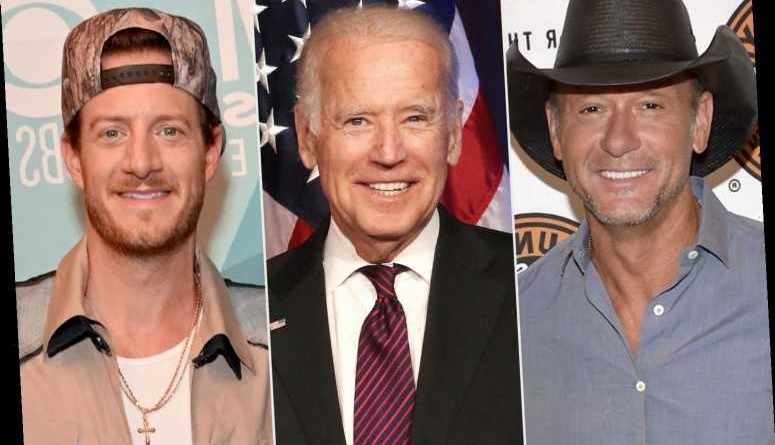 Tim McGraw and Tyler Hubbard had the nation's "Undivided" attention as they performed their inspirational duet during Wednesday's Celebrating America inauguration concert.

The country stars gave the live debut of their anthem "Undivided" while standing outdoors on the banks of the Cumberland River in Nashville.

As they introduced the song, which was released last week, Hubbard, 33, (half of Florida Georgia Line) explained that he wrote the track while battling the coronavirus.

"When I was in quarantine with COVID-19, I got to take a good hard look at myself," he began. "Inspired by my faith in God to reunite our country, I wrote this song and I sent it to Tim." "The song's message of unity and faith stirred my soul," McGraw, 53, added. "And tonight, especially as we look across the river at our strong resilient city of Nashville, we're honored to sing it for everyone."

On "Undivided," McGraw and Hubbard sing in harmony about considering where others are coming from as the start of something that can bring us together.

"Why's it gotta be all white or all black?/And when we gon' learn to try on someone's shoes sometimes?/When we gon' start to see from someone else's eyes?" they sing in the track's second verse.

Speaking with CBS This Morning last week, Hubbard said that when he learned of the attempted coup at the U.S. Capitol this month, "I thought, 'Man, I thought we needed this message last year.'"

"I didn't think we could need it any more than we needed it last year, but apparently we still do," he added.

"The Capitol thing [is] something that I don't know that I've processed well enough to even put into words yet," McGraw also told CBS This Morning. "It was so sad and so profound and something that I never thought I would see in this country."

"But the song, it speaks to more of the social contract that we have with each other," he added. "It's not about politics, it's about how we're supposed to treat each other."

The 90-minute inauguration special, which was hosted by Tom Hanks and aired on the major networks and online, also featured performances from A-list stars including Bruce Springsteen, Jon Bon Jovi, John Legend and Demi Lovato, among others.

Katy Perry also performed her hit, "Firework," during the grand finale of the evening which coincided with a captivating display of fireworks over the White House and the National Mall.