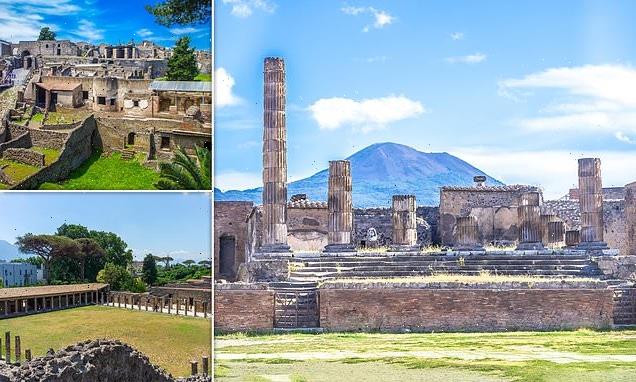 Hooray for Pompeii: The horrible history of this city – destroyed by Mount Vesuvius in AD 79 – will have children in raptures

The 20 years since I last visited Pompeii feel like a long time to me, but are less than a blink of an eye in this city’s fabled history. I was younger, single and childless. Now I’m older, married to Bridget and here with our two children, Laila, ten, and Ezra, five.

Everywhere we go feels like stumbling on to a film set — from the bustling streets of Naples to the low-key glamour of the island of Ischia, where The Talented Mr Ripley was set.

But nowhere feels more cinematic than Pompeii. Two thousand years ago, the city, which lies 14 miles south-east of Naples, was a buzzing city with some 15,000 residents before it was destroyed by the eruption of Mount Vesuvius on August 24, AD 79.

This is thought to have killed 16,000 people in Pompeii and other towns in the region, making it one of the most lethal volcanic eruptions in history. The ruined city remained frozen in time until it was discovered in 1748. Today, some 2.5 million tourists visit each year. 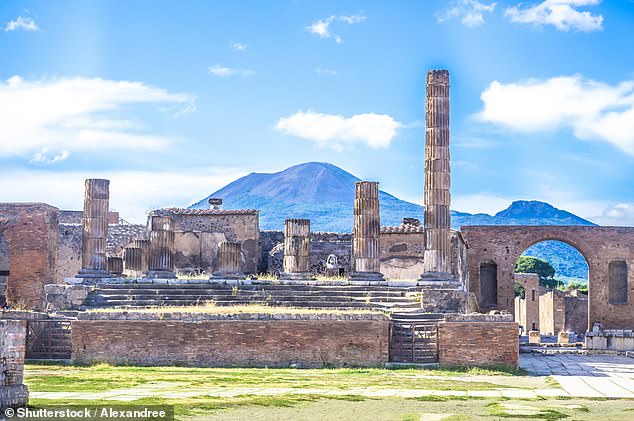 Sarfraz Manzoor and his family explored the ancient city of Pompeii, pictured, which was destroyed by the eruption of Mount Vesuvius on August 24, AD 79

Experience had taught me that when travelling with children, it is always a battle to cram as much in as possible before their attention drifts. The secret is not to do too much — and be selective. We were based in Naples and so we would be doing Pompeii in a morning. We had three hours to explore the ruins and called in some help in the form of Umberto, a guide who was engaging, informed and, most important of all, endlessly patient.

We started on the southern side of the city, where Umberto pointed out one of the oldest sites — a Greek temple dating back to the sixth century BC. ‘The temple had been standing for nearly 700 years at the time of the eruption,’ said Umberto.

Even before its destruction, Pompeii had a long history, and I wanted to share this with our children, but they were already cross with me. Ezra was upset as I had refused to buy him a replica wooden sword from one of the souvenir stalls and Laila was unhappy because so many other tourists were cooing over how cute Ezra looked. 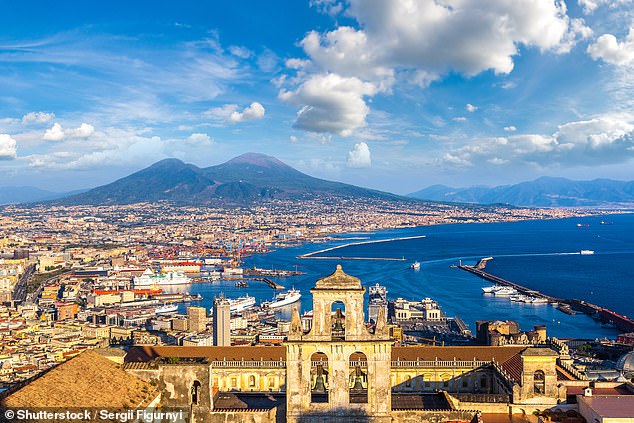 Pompeii lies 14 miles south-east of Naples, pictured, which was Sarfraz’s base for his trip 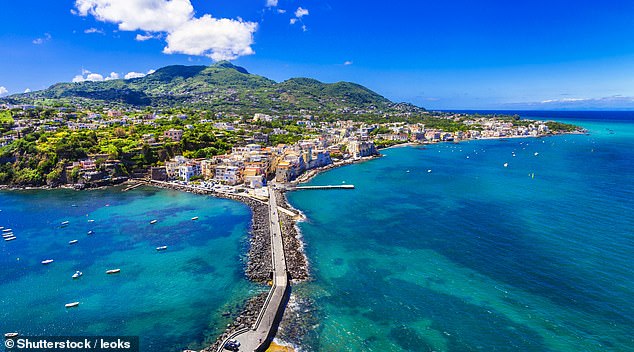 Sarfraz admired the ‘low-key glamour’ of the nearby island of Ischia, pictured, where The Talented Mr Ripley was set 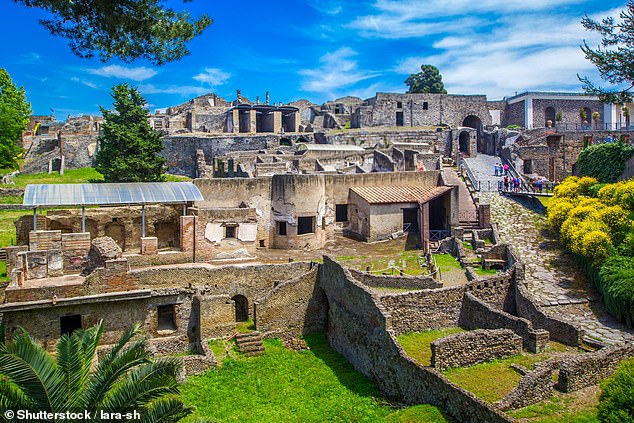 Umberto valiantly tried to share a few details about the gladiator barracks, but the children raced ahead. He explained how important culture was to the locals as we headed to the Odeon, or small theatre. He pointed out where the performers would have stood.

The stone seats are remarkably well preserved. ‘There were three different levels of seats,’ Umberto explained. ‘The noble classes got the best, while the slaves and women were right at the back — women were just before slaves.’

Pompeii covers 164 acres and it’s hard to fully process that it hasn’t been created for the benefit of tourists — but predates them by a couple of thousand years.

I started worrying about the children’s attention span, but Umberto came to the rescue. ‘Did you know that in Pompeii they would use wee to clean clothes?’ he told them. This pricked their interest. It was true: Pompeii’s launderettes used human urine to remove grease from clothes. 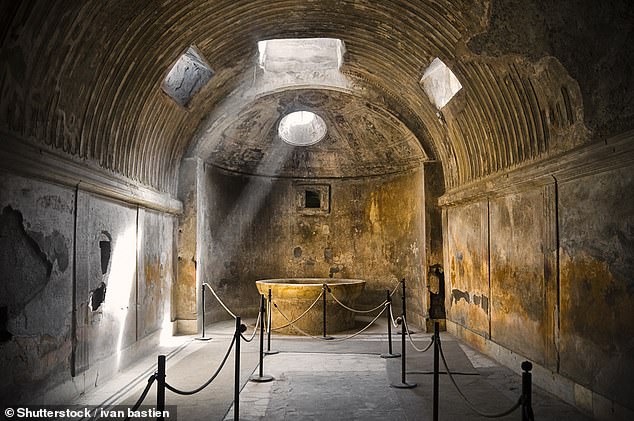 Sarfraz’s ‘engaging, informed and endlessly patient’ guide Umberto led him and his family around the city. Pictured are the city’s public baths 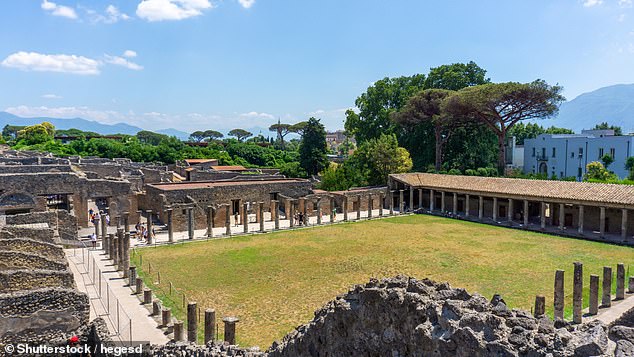 ‘Umberto valiantly tried to share a few details about the gladiator barracks (above), but the children raced ahead,’ writes Sarfraz 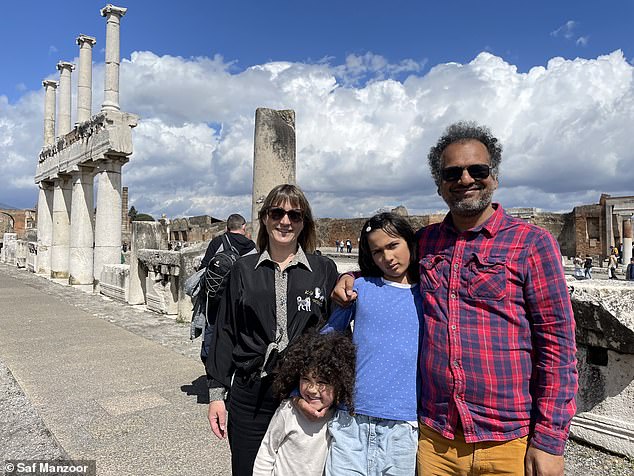 Sarfraz and his family – his wife Bridget and their two children, Laila, ten, and Ezra, five – in Pompeii

Launderettes, gyms, theatres — it was amazing to see how much of what we consider modern services existed in ancient times. At the ruins of a bakery, Umberto showed us how flour was produced by grinding the wheat. ‘The ovens were closed at the time of the eruption,’ he says, ‘and so the bread is still preserved.’ That silenced the children.

When Vesuvius erupted, it was the equivalent of two atomic bombs being detonated. Men, women and children were buried under volcanic debris.

Their bodies decomposed, leaving cavities which were pumped with plaster in the 19th century to produce plaster-cast bodies, 13 of which are displayed in a glass case. I watched the children. From the expression on their faces, I could tell that they had been utterly transported, and I was reminded of the miracle of Pompeii and how it brings the ancient past hurtling into the present. 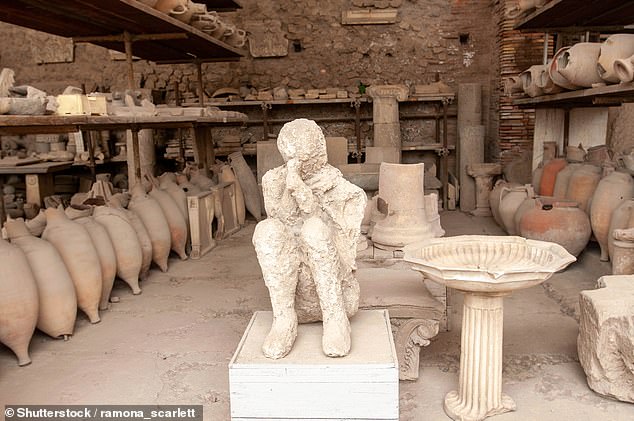 ‘From the expression on their faces, I could tell that they had been utterly transported,’ Sarfraz says of his children’s reaction to seeing plaster-cast models of those who lost their lives in Pompeii

Citalia (citalia.com) has a seven-night trip to Naples and Sorrento priced from £1,655 per adult and £959 per child, including flights. Tours of Naples, Pompeii and Vesuvius are also included.