BRITS heading on holiday this year could save around £50 if they get their travel money from a supermarket or department store.

Surprisingly, banks are currently offering some of the worst rates around.

Sun Online Travel looked at what you would get back if you changed £1,000 into both euros and dollars.

And we included some of the best known supermarkets and shops, as well as high street banks.

It turns out, the best rates on the market for both currencies can be found at John Lewis. 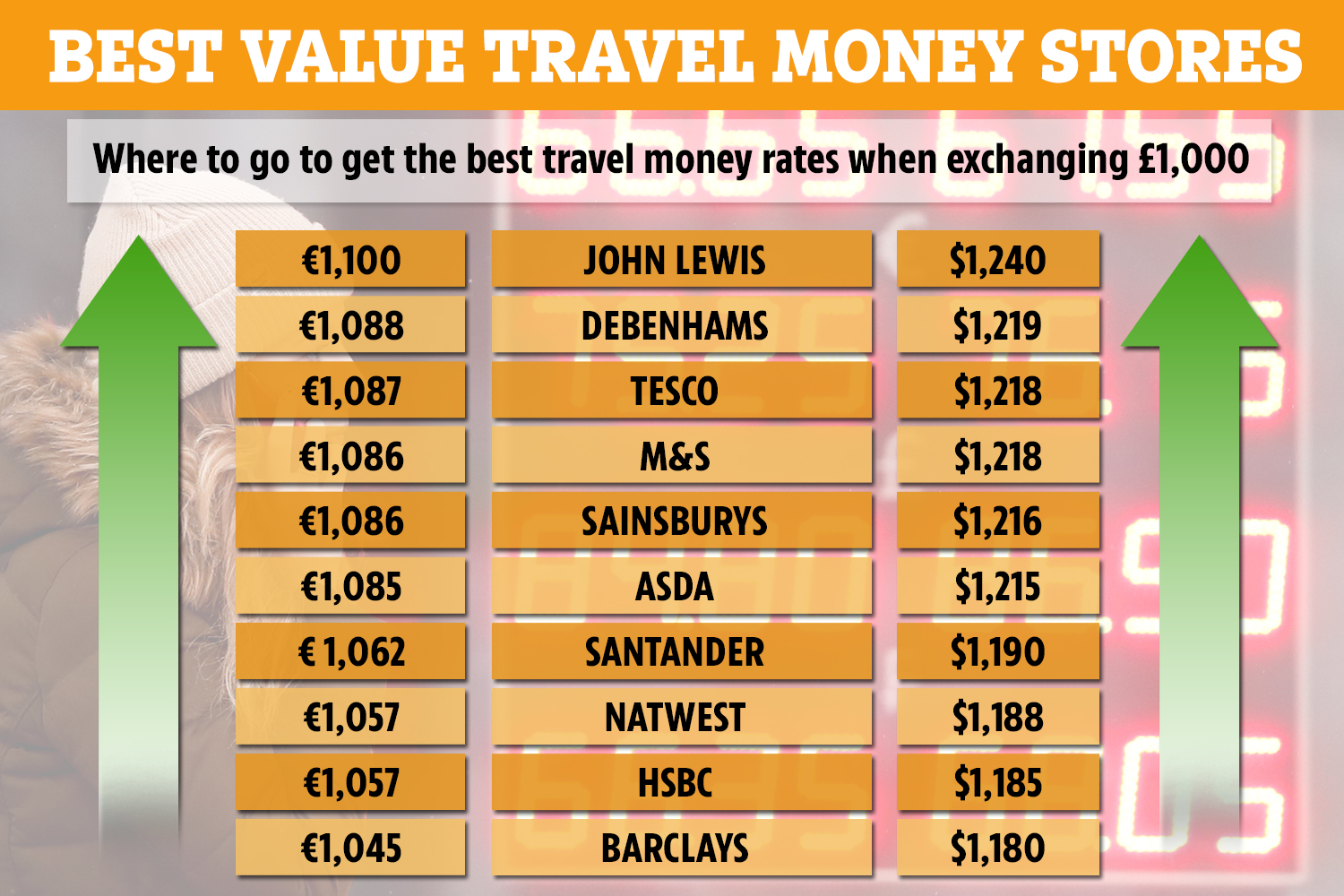 However, some of the worst rates were found at high-street banks.

Brits wanting to make their pound go further next time they are on holiday should make sure they shop around for their currency, or risk losing out on valuable spending money.

Some stores also offer even better rates or vouchers if you have a store card, such as M&S and Sainsbury's, while others will price match within a certain distance, including Tesco and Asda.

However, with the pound at a two-year low, Brits may find themselves being stretched further than usual on holiday.

What other options are there for spending abroad?

There are several specialist cards that can give you a great exchange rate.

These cards include travel credit cards and pre-paid cards which can let you pay abroad without fees or at a set exchange rate.

But, they may still charge you for taking cash out.

We recommend the Halifax's Clarity Card as it won't charge you for using it abroad, nor are there any fees for withdrawing cash.

If you do withdraw cash with other cards you'll be charged interest of 18.9 per cent – that works out at about an additional £1.50 for each £100 you withdraw.

For more on travel credit cards you can read our guide here.

Pre-paid cards: An alternative to carrying cash around is to get a pre-paid card.

These cards allow you to put a set amount of cash on the card at a fixed exchange rate.

So if the rate is good at the moment, you can put money on your card and it will stay that rate when you are on holiday.

Just keep in mind that these cards can sometimes have hidden costs and charges so be sure to read the small print.

A money expert gave her top tips to Sun Online Travel on how to avoid being ripped off when spending abroad.

Consumer rights advocate Michelle Couch-Friedman said to always check the note value before handing it over, especially with currencies that are very different to pounds.

She also advised checking the correct currency before buying, with many Brits not realising Turkey, Bulgaria and Czech Republic not using the euro.

Is Taylor Swift Pregnant? Some Fans Think So

Ellen DeGeneres’ show’s future up in the air depending on investigation findings, experts say
World News