Before the Eiffel Tower and Statue of Liberty were even built, there was a very different landmark that was wowing tourists.

Her name is Lucy, and she's a 65-foot-tall wooden elephant.

Lucy the Elephant is an iconic Jersey Shore attraction, and now she can be booked on Airbnb. It will be the first time Lucy has opened her doors to overnight guests in over a century.

Insider spoke to Lucy's Airbnb host Richard Helfant — who began volunteering for her 50 years ago — to learn about her incredible 138-year history, find out which US president has paid her a visit, and discover how she went from a rowdy tavern to an American legend.

Lucy the Elephant was built in 1881, making her the oldest roadside attraction in America. 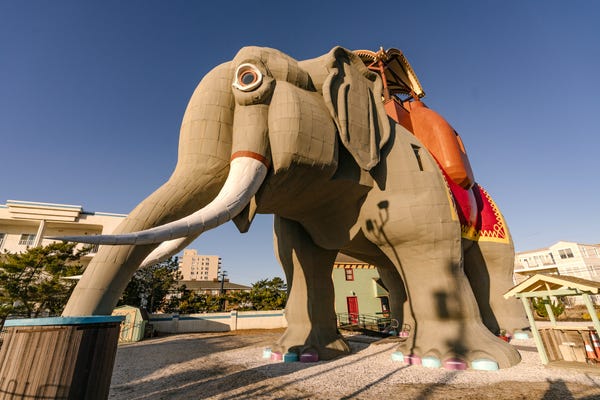 Legend has it that sailors would swear off rum for days after spotting Lucy on the horizon.

The story goes that Lucy made headlines in the late 1880s after a ship laid eyes on an elephant that stood six stories high. Men on board told the reporters waiting for them in New York, who went to Atlantic City and confirmed their tales were true.

Lucy was designed by an inventor who wanted to attract visitors and property buyers to the underdeveloped land he had just bought in Atlantic City. 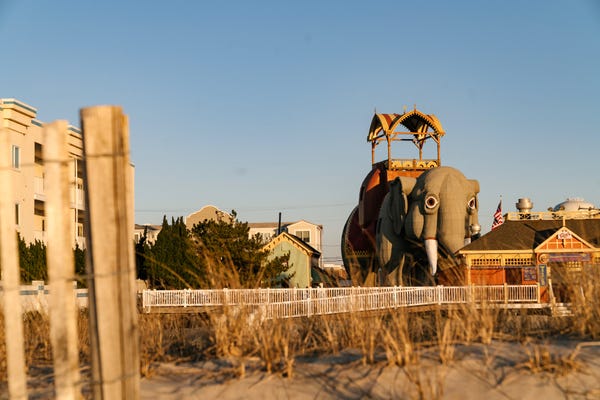 Gertzen's son John later decided to open Lucy for business, charging visitors 10 cents to climb the stairs up her legs and reach the observation deck on her back. It was John's wife, Sophie Gertzen, that first called her Lucy (for reasons that still remain unknown today).

Lucy hosted a British doctor, along with his wife and four children, for an entire summer in 1902. 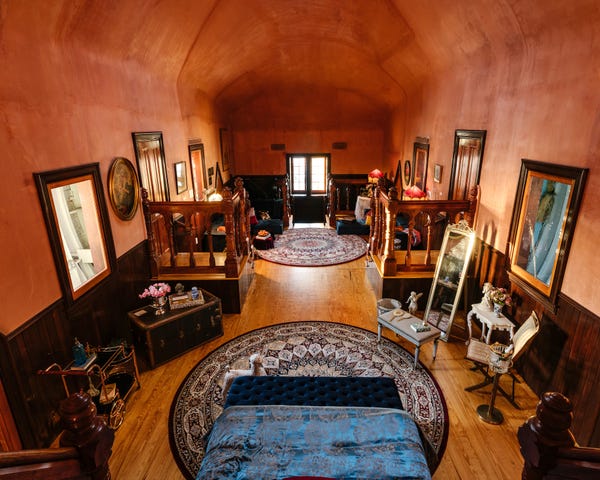 He also placed a bathroom in one of Lucy's shoulders, complete with a miniature bathtub.

Helfant told Insider that Airbnb guests will be "transported back to the Victorian era" when they spend the night inside. 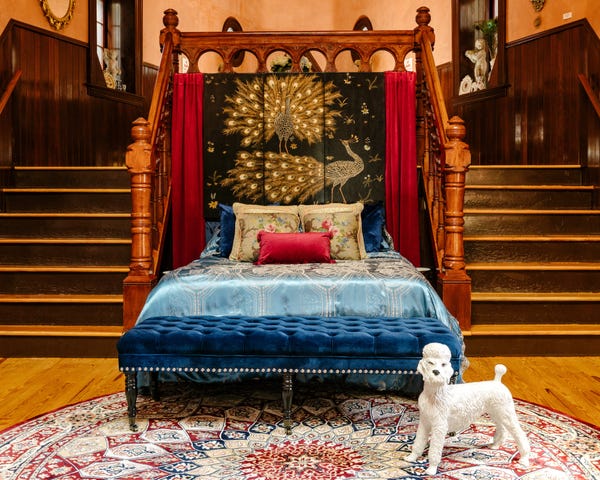 "These lucky guests will be reliving an approximate version of what Lucy would have looked like when she served as a vacation home in 1902, immersing themselves in another chapter of her long story," he added.

Lucy comes complete with a grand bed, antique trunk, and other special pieces that reflect her Victorian origins. 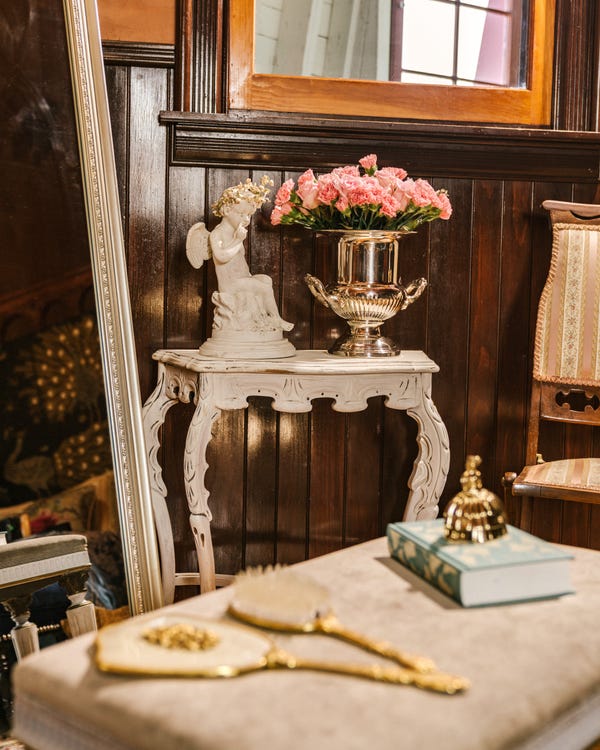 Even the sculptures, paintings, and flower arrangements will make you feel like you're in another era.

As Lucy entered the 20th century, she went through plenty of changes and overcame many challenges. 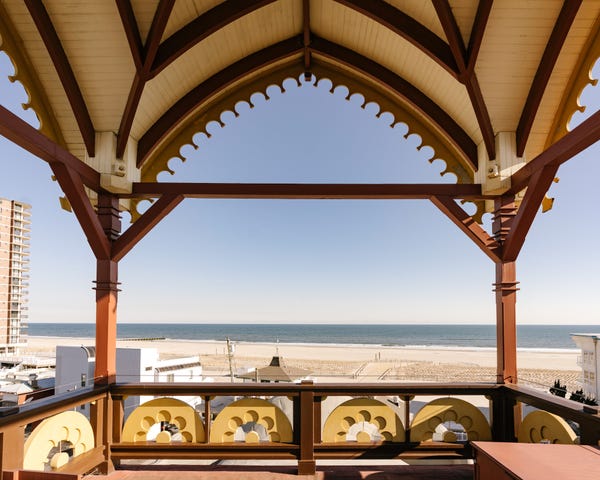 She survived a vicious storm in 1903 and had to be dug out of knee-deep sand by volunteers, according to her website.

Lucy was then turned into a tavern. One night a few customers had too much to drink and knocked over an oil lantern, almost burning her to the ground. Her drinking days were over.

Lucy remained a tourist attraction for decades, even surviving a hurricane in 1944. 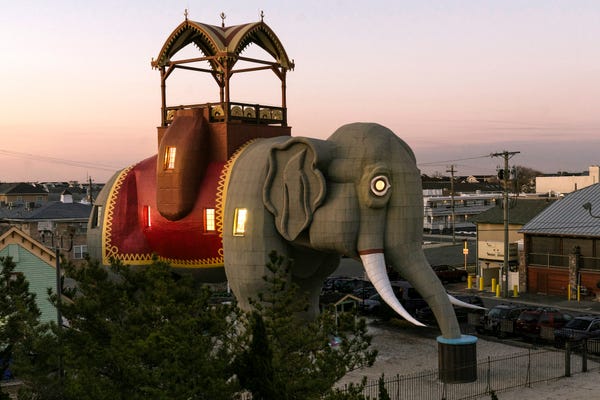 But, by the 1960s, she was deteriorating and deemed unsafe for visitors. Developers began eyeing her land.

In 1970 Lucy was donated to the City of Margate, which launched a huge campaign to try and save the elephant that had been watching over the Jersey Shore for almost a century.

Helfant, who used to visit Lucy before she was closed to the public, was in the seventh grade. His teacher told him he could raise money to help save his favorite elephant.

"Lucy has been a part of my life for as long as I can remember," Helfant said. "I was more than happy to go door to door selling candy, cookies, and whatever I could to raise money to open her once again."

Jersey Shore residents raised tens of thousands of dollars to relocate Lucy to land that the city owned just two blocks away. In 1974, her doors were opened to visitors once again. 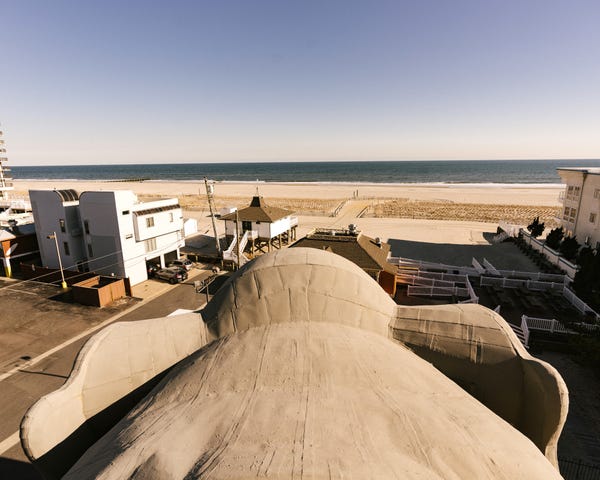 Lucy is now a National Historic Landmark and receives 130,000 visitors every year. Helfant serves as executive director of the Save Lucy Committee, which has raised more than $500,000 annually for her ongoing preservation.

"For me, the best part of my job is seeing the faces of young kids who visit Lucy for the first time," he told Insider. "Seeing the expressions on their faces are what make what I do not a job, but a labor of love."

And now guests will have a chance to step back in time and surround themselves with Lucy's history during an Airbnb stay. 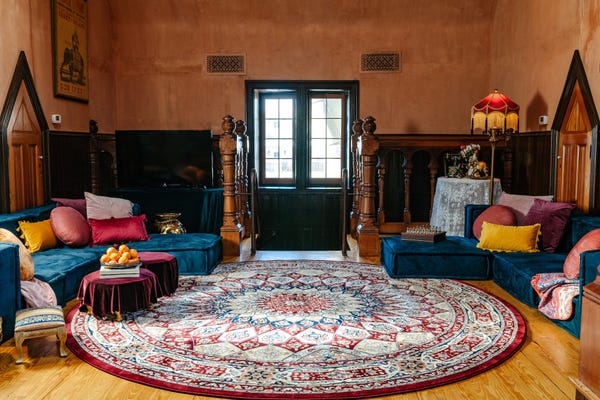 "When you enter Lucy, you can relive her history," Helfant said. "Lucy is part of so many fond memories. Her charm, her size, and her history capture the imagination."

"You can imagine rum runners scurrying up her stairs during Prohibition to warn their smugglers of authorities nearby, shining different colored lights out of her eyes," he added. "Lucy was part of the real Boardwalk Empire! And you can even walk in the footsteps of former president Woodrow Wilson."

The Airbnb guests will not only get to learn about Lucy's incredible history, but they will be treated to meals from top Jersey chefs and bakeries.

They'll also just be a few steps from the ocean, along with a five-minute drive to Atlantic City.

Helfant hopes that by opening Lucy's doors on Airbnb, even more people will learn about her incredible story and pay her a visit. 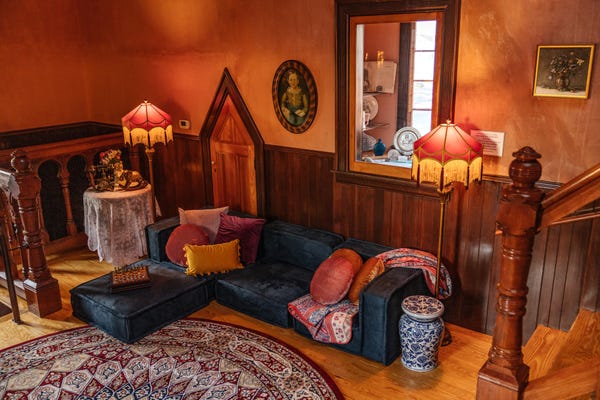 "Lucy's history is unparalleled," he said. "She represents one of the only places in our country where you can step inside and be so completely immersed in such a long history."

And for those who won't get a chance to spend the night, have no fear. Lucy is open to visitors during the day throughout the year.