Game of Anglo Saxon Kings: 1,400-year-old bronze knight from seventh-century chess set that was unearthed in Norfolk field sells for £120,650 at auction

The 1.75in-tall item, which depicts an armed horse rider, was discovered by an anonymous metal detectorist near Bradwell in Great Yarmouth.

Experts believe the carving, which shows a mounted soldier with centre-parted bobbed hair, large pellet eyes and a moustache, dates all the way back to the 7th Century – making it a relic of Anglo-Saxon Britain.

Though it is suspected to be a piece from a game similar to chess that formed part of a chess, no similar pieces or remains of a board were found alongside it – meaning it could have been used instead to plan battle tactics. 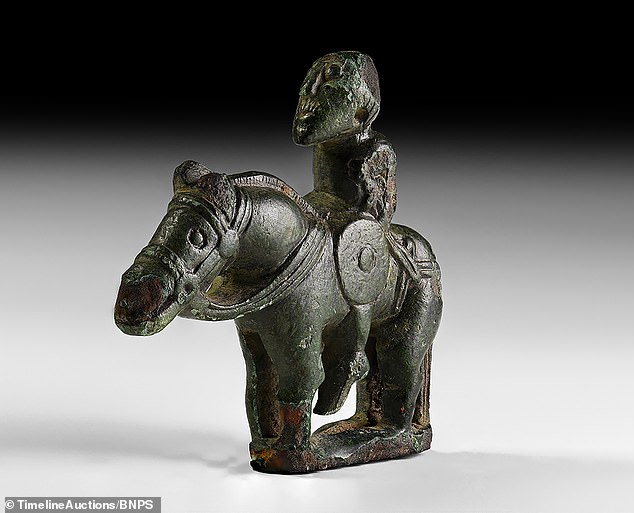 The bronze item, depicting an armed horse rider, was discovered by the anonymous finder in a field near Bradwell, Great Yarmouth, Norfolk. The 1.75in-tall figure dates back to the 7th Century and remains in fantastic condition – despite being around 1,400 years old

Following its discovery, the vendor registered the piece with the Government’s Portable Antiquities Scheme. Once they finished studying it, he was able to place it up for sale with Timeline Auctions of Mayfair, London.

They gave it a pre-sale estimate of just £6,000 but that figure was soon blown out of the water following a bidding war.

It eventually sold to an unknown collector for a hammer price of £90,000, rounding up to an eye-watering £120,650 after fees were added. The money will be split between the lucky finder and the landowner.

Dr Rafaelle D’Amarto, from Timeline, said the piece represents a piece of British history. He explained: ‘Where I am from in Italy you can buy a genuine Roman helmet for a good price of £20,000 as the market is not what it is here. 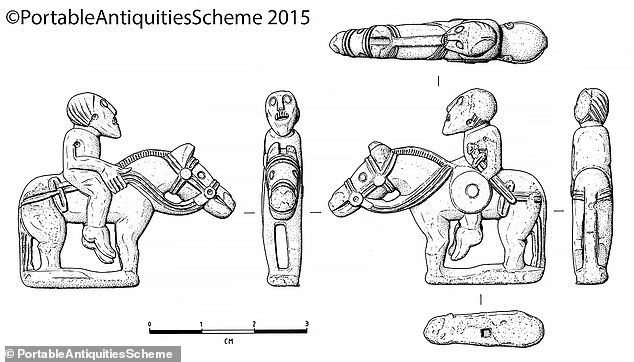 Experts believe the carving to be a gaming piece similar to chess that most likely formed part of a set. However, with no similar pieces or remains of a board discovered alongside it, it may also have been used to tactically plan out upcoming battles

The kingdom’s most famous king was Rædwald of East Anglia, who ruled from about 599 until his death in 624.

He was the son of Tytila and a member of the Wuffingas dynast, the first kings of the East Angles.

From 616, Rædwald was the most powerful of the English kings south of the River Humber.

He was the fourth ruler to hold imperium over other southern Anglo-Saxon kingdoms.

Rædwald was the first king of the East Angles to become a Christian, converting before 605.

He helped Christianity to survive in East Anglia during the apostasy of the kingdoms of Essex and Kent.

Historians consider him the most likely occupant of the Sutton Hoo ship-burial.

‘In Britain people are fascinated by their past. It is in their blood and they are much more interested in where they come from.

‘This is a historically important piece and we have never found another quite like it. It clearly shows us how the seventh century Anglo-Saxon soldiers would have looked and dressed.

‘I would say it would likely have been used as a game piece similar to the chess figures we have today. It is also possible that it would have been used tactically to plan out battles.’

He added: ‘It was discovered by an amateur metal detector, who is very pleased with this result. In my country it is illegal to discover things in this way because the authorities think items will not be properly registered.

‘Here however it is very common and is a great way of discovering so many interesting items from centuries ago.’

The piece dates back to a time where the English counties of Norfolk and Suffolk were ruled by fearsome Anglo-Saxon kings.

The kingdom of East Anglia was formed in the 6th Century in the wake of the Anglo-Saxon settlement of the British Isles.

It was initially ruled by the Wuffingas dynasty, named after Wuffa, whose name means ‘descendants of the wolf’, during the 7th and 8th Centuries.

After 749 East Anglia was ruled by kings whose genealogy is not known, or by sub-kings who were under the control of the kings of Mercia.

It fell to fell to Mercia in 794, before reclaiming its independence from King Beornwulf between 826 and 869, following an East Anglian revolt – only for it to be conquered by the Danes in 869 to form part of the Danelaw.

The kingdom was conquered by Edward the Elder of Wessex in 918 and subsequently incorporated into the Anglo-Saxon kingdom of England.