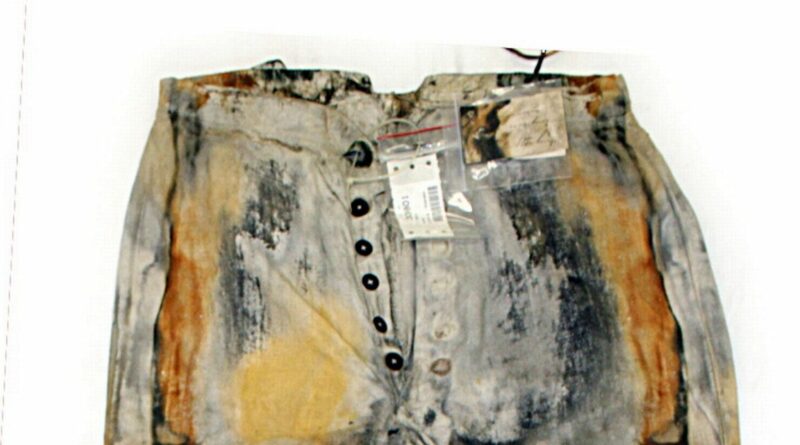 An extremely old pair of rotting trousers have just been flogged for more than £100,000.

The item of clothing was pulled from the wreck of a ship that sunk in 1857 and has now fetched $114,000 at the auction house.

It is thought they were a pair of men’s working trousers, designed for the hard graft of labour.

The claim was made by experts from Holabird Western Americana Collections, who think the old owner could have been a miner.

Now black-brown in colour, after years of rot at the bottom of the ocean, the original colour of the pair, which has five buttons on the fly, remains a mystery.

They were located in a trunk belonging to a passenger on the ship, thought to have been named John Dement, a merchant from Oregon, USA.

His belongings were found inside the wreck of the S.S. Central America, which was discovered in 1988 and is thought to have been making the journey to New York from Panama.

Dement was a veteran who fought in the Mexico-American war and managed to survive the sinking of the ship.

Hundreds of others were not so lucky.

The boat earned the nickname the ‘Ship of Gold’ due to massive stockpiles of gold bars being carried in its freight.

But while much is known of the ship, the trousers themselves are still shrouded in mystery, Smithsonian reports.

According to the listing on the auction house, they could be an “early manufacture of work pants sold by Levi Strauss.

To keep up to date with all the latest news stories, make sure you sign up to one of our newsletters here

“The five-button fly is nearly identical, if not technically identical, to Levi’s of today, inclusive of the exact style, shape and size of the buttons themselves.

“We do not believe this to be a coincidence.”

But the dates don’t match – the S.S. Central America made its way down to the bottom of the deep blue a full 16 years Levi Strauss made jeans for the first time in 1873.