How 1918 Spanish flu pandemic helped spark the rise of the Nazi party, says US bank

The 1918 Spanish flu pandemic was linked to the rise of the Nazi party, a federal paper has revealed – sparking fresh fears of American division over the nation’s response to COVID-19.

The Nazi party’s ascension to power was in part triggered by the fallout from the pandemic, which killed more than 50 million people and infected one-third of the global population, according to a research paper written by bank economist Kristian Blickle and published by the Federal Reserve Bank of New York.

The shocking connection raises concerns over life post-coronavirus pandemic, with tensions visibly mounting between the far-right and the liberals and deep divides already emerging across the US.

In Congress, the Trump administration has been at loggerheads with Democrat senators and state governors about the most effective response to the pandemic.

While at a grassroots level, gun-touting conservative protesters have been marching on capitol buildings at anti-lockdown rallies clashing with police and counter-protesters. 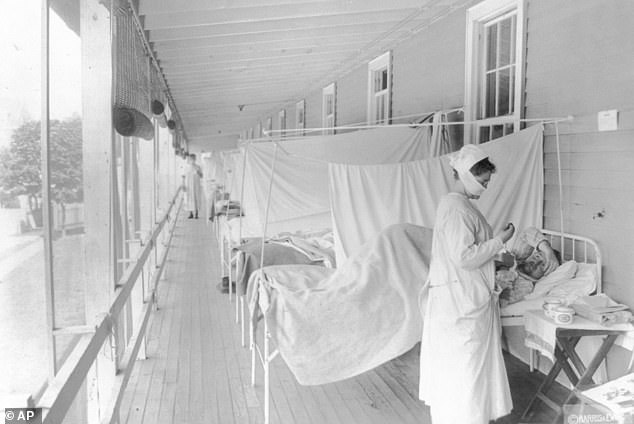 The Nazi party’s ascension to power was in part triggered by the fallout from the Spanish flu pandemic, according to a research paper by the Federal Reserve Bank of New York

After the 1918 pandemic, ‘influenza deaths themselves had a strong effect on the share of votes won by extremists, specifically the extremist national socialist party’ in Germany’s 1932 and 1933 elections, the paper read.

The spike in votes for the Nazi party led to Adolf Hitler becoming chancellor of Germany in 1933 and going on to murder around six million Jews in the Holocaust.

Blickle said the findings are likely the result of ‘changes in societal preferences’ and that, unlike the coronavirus pandemic which hits older people more than the young, the Spanish flu targeted the young.

This could have ‘spurred resentment of foreigners among the survivors (as has happened in past pandemics), driving voters towards parties whose platform matched such sentiments,’ the paper reads. 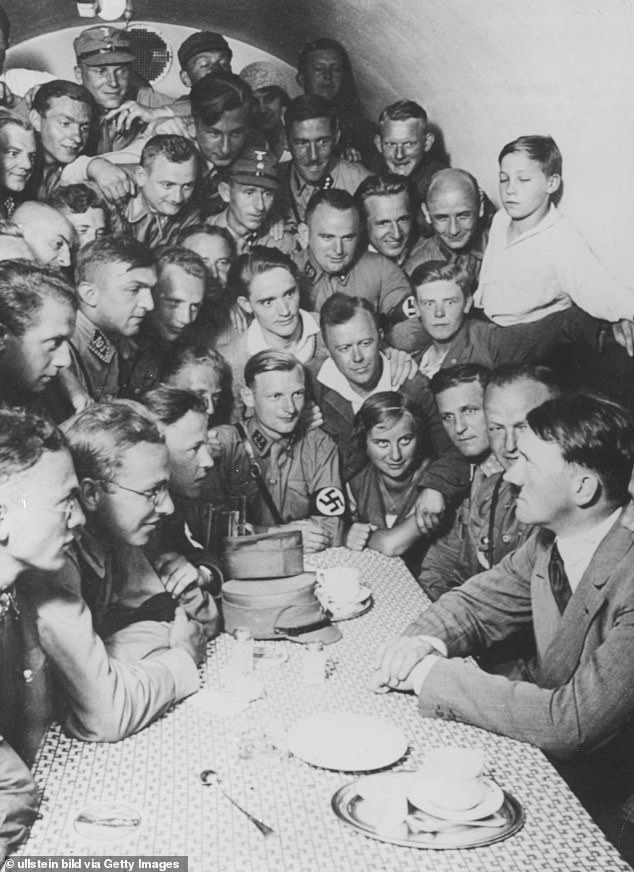 Adolf Hitler in 1931/1932. Extremist parties – notably Nazis – had a spike in voters after the pandemic, the report found

‘The correlation between influenza mortality and the vote share won by right-wing extremists is stronger in regions that had historically blamed minorities, particularly Jews, for medieval plagues,’ the paper noted.

The paper found the trend was not as evident for other extremist groups such as communists.

While the report does acknowledge there were many other factors leading to the rise of Nazi Germany, it states the research did control for ‘the influences of local unemployment, city spending, population changes brought about by the war, and local demographics or when we instrument for influenza mortality.’

It is not possible to predict how the coronavirus pandemic will influence voter sentiments today, but there are worrying parallels between then and now. 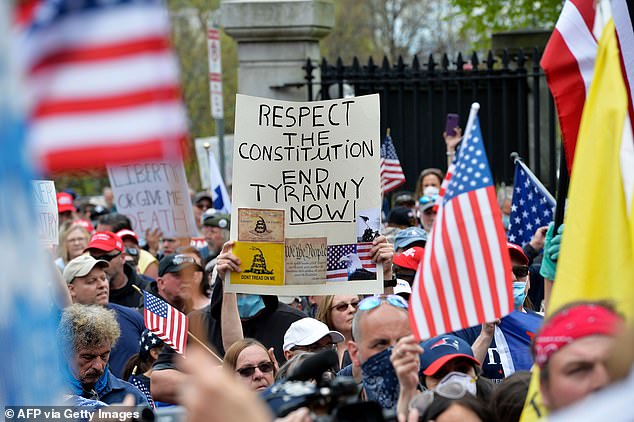 Protesters rally outside the Massachusetts State House in Boston on May 4. The US has become increasingly divided over the appropriate response to the pandemic 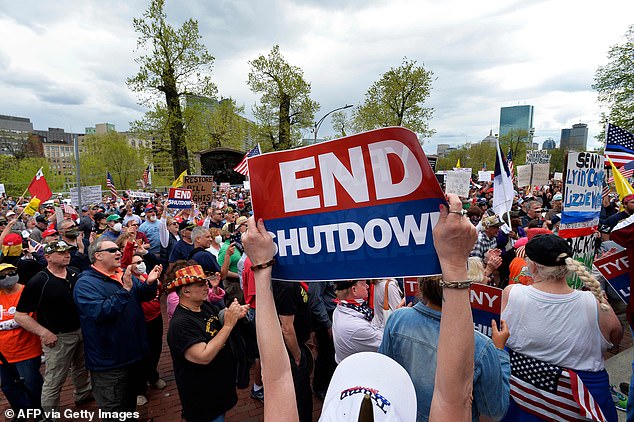 Deep chasms are emerging between communities in the US, far-right wing extremists are rising up taking their firearms to the streets to protest against stay-at-home orders, and civil unrest has become a growing fear as the economy has been pummeled and millions of Americans have lost their jobs.

As the pandemic continues to spread across the US and some states start to ease lockdown restrictions, the nation has become increasingly divided over the appropriate response to the pandemic.

Thousands of right-wing anti-lockdown protesters – many of them sporting Republican and Donald Trump merchandise – have taken to the streets and marched on capitol buildings demanding an end to stay-at-home orders claiming they have lost their liberty and that businesses, jobs and the economy have been irreparably damaged. 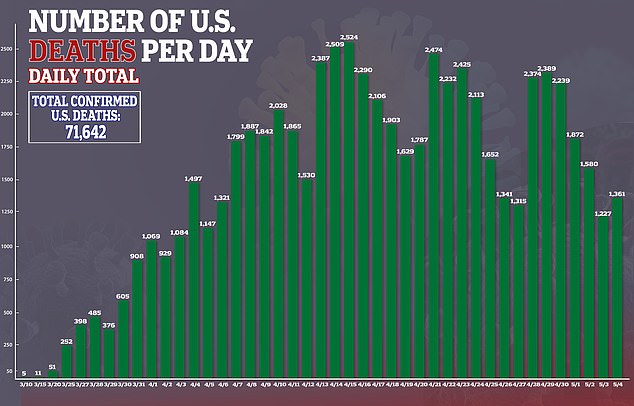 President Trump has fueled their actions, tweeting his support of the protests – where people are seen ignoring social distancing and not wearing masks – and publicly attacking Democrat representatives and governors throughout the pandemic.

In recent weeks, he has heaped praise on states with Republican governors for easing lockdowns and singled out states with Democrat governors that have maintained stay-at-home orders.

Counter-protesters are also taking to the streets calling for social distancing and stay-at-home orders to continue so that more lives can be saved, as the American public becomes increasingly divided.

More than 71,000 Americans have been killed by coronavirus and more than 1.2 million have been infected in the little time it is known to have been on US soil.

Several other parallels have been drawn between the Spanish flu of 1918 and the coronavirus of 2020.

Despite the great strides in science made over the last century, once again medics today are grappling with a lack of vaccines, treatments or cures.

Instead, just as in 1918, medics are resorting to centuries-old advice to stay at home, while quackery has resurfaced via President Trump’s claims that people can inject disinfectant into their veins.

With a staggering 675,000 Americans being wiped out by the Spanish flu and one-third of the global population infected, the consequences of following along the same path as back then could be devastating.

In 1918, no one had a vaccine, treatment or cure for the great flu pandemic as it ravaged the world and killed more than 50 million people.

No one has any of that for the coronavirus, either, with scientists frantically trying to develop vaccines and serious sufferers becoming guinea pigs to experimental drugs.

The advice and stay-at-home orders rolled out to slow the spread of coronavirus mirror the advice back then, with the ancient common sense of quarantining being back.

Social distancing, hand-washing and masks were leading control measures then and now.

‘If you get it, stay at home, rest in bed, keep warm, drink hot drinks and stay quiet until the symptoms are past,’ said Dr. John Dill Robertson, Chicago health commissioner in 1918.

‘Then continue to be careful, for the greatest danger is from pneumonia or some kindred disease after the influenza is gone.’

But so too is quackery. In 1918, theories included to rub raw onions on your chest.

In 2020, President Trump made the baffling suggestion that people inject disinfectant into their veins.

Parallels have also been drawn between the failure of US presidents to take the threat seriously from the start.

Trump all but declared victory before infection took root in his country and he’s delivered a stream of misinformation ever since. 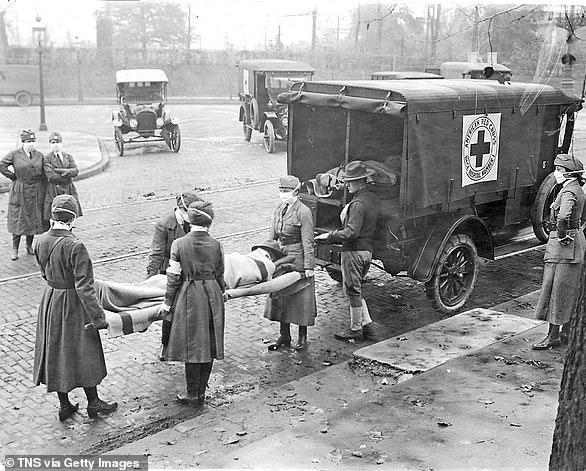 Not once, historians say, did Wilson publicly speak about a disease that was killing Americans grotesquely and in huge numbers, even though he contracted it himself and was never the same after.

Wilson fixated on America’s parallel fight in World War I like ‘a dog with a bone,’ says John M. Barry, author of ‘The Great Influenza.’

The infections themselves have also got vast similarities.

Like COVID-19, the 1918 pandemic came from a respiratory virus that jumped from animals to people, was transmitted the same way, and had similar pathology, Barry said by email.

The toll was heavier on average people and the poor, crowded in tenements, street cars and sweaty factories.

They could not all live by the words of the 1918 US surgeon general, Rupert Blue: ‘Keep out of crowds and stuffy places as much as possible. … The value of fresh air through open windows cannot be overemphasized. … Make every possible effort to breath as much pure air as possible.’

The same worrying trend has emerged across the US where wealthier communities have recorded fewer fatalities whereas low-income residents have been especially ravaged by the virus.

And just as the US has took aim at China over the coronavirus pandemic, with President Trump repeatedly insisting on calling it the ‘Chinese virus’, the Spanish flu was blamed on Spain.

The suspected ground zero of the 1918 flu ranges from Kansas to China. But it was clear to US officials even in 1918 that it didn’t start in Spain.

The pandemic took on Spain’s name only because its free press ambitiously reported the devastation in the disease’s early 1918 wave while government officials and a complicit press in countries at war – the US among them – played it down in a time of jingoism, censorship and denial.

It could just as easily have been called the US Army flu, US Navy flu, the German flu or British flu instead.