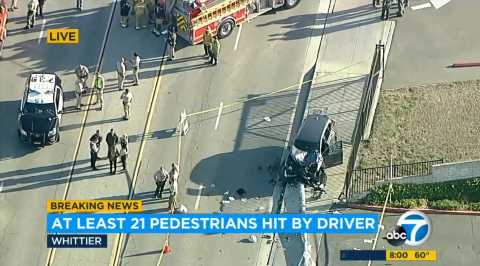 Twenty-two members of a Los Angeles County sheriff’s training academy class who were out on a run Wednesday morning, Nov. 16, in the South Whittier area were injured when struck by a SUV.

Including the driver, the accident left five in critical condition, four with moderate injuries and 14 with minor injuries, according to the Sheriff’s Department.

Just before 6:30 a.m., the group was jogging along the 10600 block of Mills Avenue, near Trumball Street when the driver plowed into them, said Esteban Benitez, a spokesman for the L.A. County Fire Department.

The gray SUV ended up on the sidewalk, headed the wrong way. Its front end was smashed up, perhaps because of running into a light pole that appeared to have been knocked over.

The motorist was taken into police custody near the scene, said Deputy Jesse Lucero, a department spokeswoman.

The recruits were on a class-training exercise with the STARS Explorer Academy in Whittier, about a mile from the crash.

Paramedics sent up a triage area at the scene, and transported the five people in critical condition to a hospital, Benitez said.

The circumstances of the crash were under investigation.

“I am shocked to hear that a driver plowed into a group of young Sheriff’s Academy  cadets during their morning training run,” Los Angeles County Supervisor Kathryn Barger said in a statement. “These individuals represent the future of law enforcement, they have incredible courage and my utmost respect for wanting to serve their communities.

“I’m tracking this incident closely — it’s senseless and tragic,” she said. “From the bottom of my heart, I am hoping no one was seriously hurt.”