Home » World News » 7 Rochester officers have been suspended over the death of Daniel Prude, who stopped breathing after police held a ‘spit hood’ over his head for 2 minutes 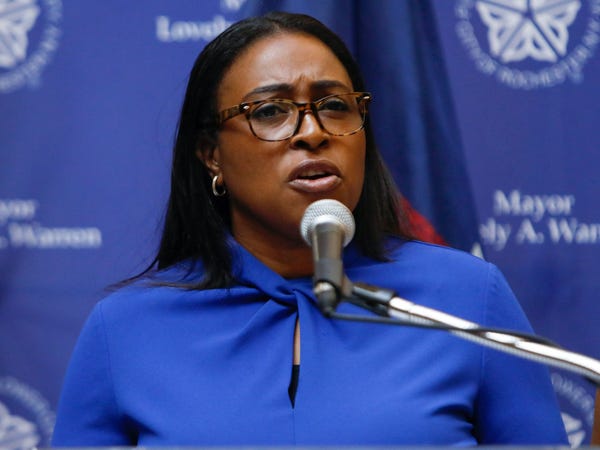 Rochester Mayor Lovely Warren announced Tuesday that seven officers involved in the March death of Daniel Prude would be suspended.

"I never shied away from taking action and holding our police — or anyone that fails their duties in our communities — accountable," Warren said in a press conference. "That is why I am suspending the officers in question today."

Since April, the case has been under investigation by New York state Attorney General Letita James.

"I urge the attorney general to complete her investigation. I understand that the union may sue the city for this, they shall feel free to do so — I have been sued before," Warren said.

Prude, a Black man, was visiting his brother from his home in Chicago when he had a mental health crisis. His brother Joe called the police on the night of March 23 after Prude wandered outside unclothed, hoping they would get him help.

A video, which attorneys for Prude's family gave to the Democrat & Chronicle, shows Prude complying as officers tell him to get on the ground, and one points a taser at him. Prude told officers he had the coronavirus. Police then placed a white bag — or a "spit hood," used to protect officers from bodily fluids — over Prude's head, and he became agitated.

One of the officers then pressed Prude's head into the pavement for two minutes. Prude was hospitalized and died a week later, after being taken off life support.

The Associated Press reported that acute intoxication by phencyclidine, or PCP, was also noted on the medical examiner's report.

During the press conference, Warren said Police Chief La'Ron Singletary told her that Prude died of "an apparent overdose while in custody."

"I only learned of those officers' actions on August 4 when cooperation council Tim Curtin reviewed the video for the FOIL request by Prude's family," Warren said. "At no time before August 4 did Singletary or anyone make me aware of the officers' actions in regard to Mr. Prude's death."

Following the publication of the video Wednesday, Prude's family and local activists demanded that the officers involved be fired and charged in his homicide.

"The Rochester Police Department has shown time and again that they are not trained to deal with mental health crises," Ashley Gantt, a community organizer for Free the People Roc and the New York Civil Liberties Union, told the Democrat and Chronicle. "These officers are trained to kill and not to de-escalate. Daniel's case is the epitome of what is wrong with this system and today we stand firmly seeking justice for Daniel and his family, and for all the victims who have been murdered and terrorized by the Rochester Police Department."