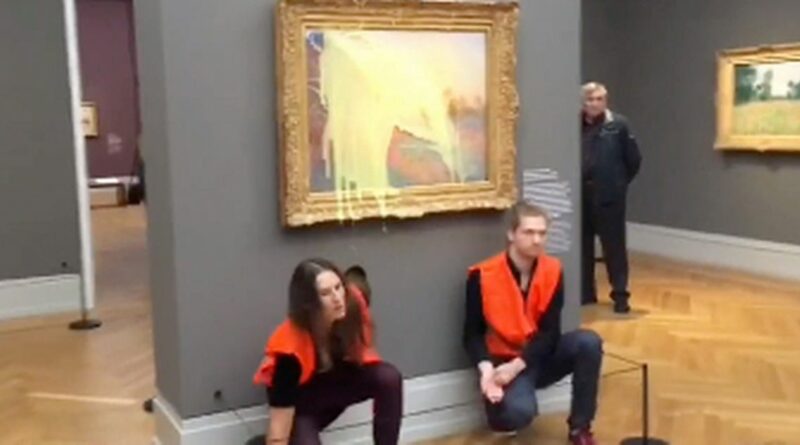 One of the world's most expensive paintings has been smeared with mashed potato and glue by protestors.

The shocking incident took place at the Potsdam Barbarini museum in Germany.

The pair of protestors from the Last Generation group defaced the iconic Les Meules painting and covered it in food and glue.

A spokesman for the group, known in their native count as Letzte Generation said on Twitter: "We are asking society the same question as 2 women with #Tomatensuppe at London's National Gallery last week: What is worth more, art or life?

"More and more people refuse to accept the destruction and endangerment of human beings, to accept life in silence.

"We make this #Monet the stage and the public the audience.

No word on whether or not the painting has actually suffered permanent damage has yet been released by the museum.

As expected, the stunt went down badly on social media.

One person likened the pair of protestors to iconic 90s children's television presenters and mashed potato lovers "Bodger and Badger", while another tweeted: "Has anyone considered gently tossing soup at anti-nuclear leaders and institutions like Greenpeace and "Friends" of the Earth? I could be into it."

And many on social media questioned why they would waste food during a time of crisis for those most in need in almost every country in Europe – including Germany.

Earlier this month, protestors from Just Stop Oil defaced a Vincent van Gogh painting by throwing a can of Heinz tomato soup at the iconic Sunflowers painting hung at London's National Gallery.

Thankfully, the painting was not damaged, but the frame suffered superficial damage.

And in a totally un-self-aware comment, a spokesman from the group said: "“The cost of living crisis is part of the cost of oil crisis, fuel is unaffordable to millions of cold, hungry families. They can’t even afford to heat a tin of soup.”