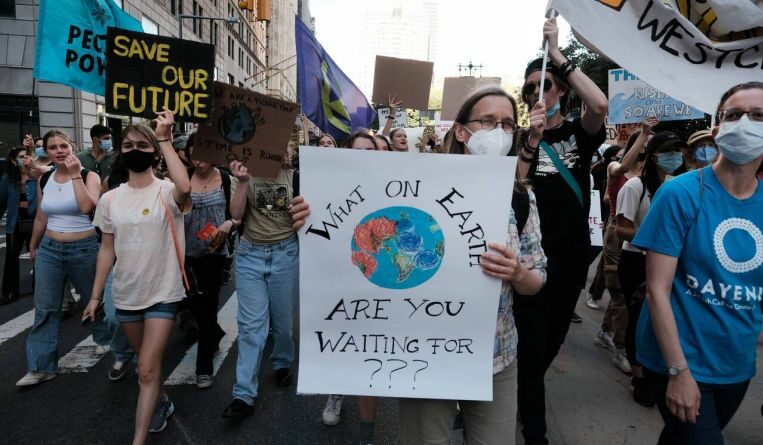 From Nairobi to Washington, marchers – including Thunberg, who joined protests in Berlin – carried placards and homemade banners during the demonstrations, which drew fewer protesters than before Covid-19 in most cities.

“It’s slightly disappointing there are less people than there used to be – but people will come back. The problem is not going away,” said Erin Brodrick, 17, one of about 250 protesters in London’s Parliament Square.

Before the pandemic, the square often overflowed with activists during larger Friday marches.

Brodrick said young people “feel really scared about the future of the planet” as they see climate change impacts strengthen and emissions continue to rise, despite a raft of political promises to slash them.

But because underage protesters cannot vote, “what else can I do but come out here?” she said, wielding a green “Planet Over Politics” sign.

In Barcelona, about 200 youth activists, children and parents joined a protest around a cloth depicting the Earth, showing their support for a court action launched in June aimed at forcing the Spanish government to boost its climate policy.

Gathered in the Catalan capital’s main square, they also demanded a stop to a planned expansion of Barcelona’s airport.

Filip Frey, a 23-year-old Polish activist studying engineering in Barcelona, said younger people will be the ones who pay for the selfish actions of politicians who “only care about their publicity, their money, their power”.

“We are just furious and angry,” he said, urging society as a whole to join the youth protests. “If we don’t do anything, nothing will change and we will just burn or drown.”

In Nairobi, where about 30 activists in green-and-white T-shirts gathered in a central park, many said there was little evidence politicians were listening to their pleas to work faster to cut emissions and curb climate risks.

“Young people have been speaking up for years now and there is a lot of impatience … We want to begin seeing governments taking rapid action,” said Elizabeth Wathuti, head of campaigns for the Wangari Maathai Foundation, a local environmental group.

“We’ve been speaking out about this but our voices are not being heard,” she said, adding that “we’re the ones that have to live with the consequences of the inaction.”

Patricia Kombo, another activist, said one aim of the protest was to push politicians to commit to more aggressive action on climate change ahead of the upcoming international COP26 UN climate negotiations in Glasgow, starting Oct 31.

“We’ve had a lot of climate talks but what we get is empty promises. We want real climate action at COP26 because we can’t wait any longer,” she said as activists waved signs saying, “Stand up for climate justice” and “Later is too late”.

Protesters gathered in Washington said they were pushing for a comprehensive US$3.5 trillion (S$4.7 trillion) national US climate bill and an immediate transition to green energy, said Magnolia Mead, one of the organisers.

Jamie Minden, 18, a student at Washington’s American University, said the movement’s return to large-scale protests was crucial to keeping up pressure for climate action.

“It is so critical to get back out in the streets – it’s not the same online,” he said. Street protests “get a lot more attention”.

Activist Shelby Grace Tucker, 14, who had come to the protest from Baltimore, said getting back on the streets felt “really empowering” and was a way for younger people – who might not otherwise be able to garner attention, to “still make a difference”.

To weather the pandemic, Fridays for Future largely moved online, with education programmes and other events, though small groups continued to protest on the streets.

But the group also used the time to try to broaden the movement and coordinate its work with social pushes on other issues including race.

Sasha Langeveldt, 24, a Black Fridays for Future activist now working for the Friends of the Earth nonprofit, said that as activists grew older the movement needed to focus more on turning protesters into voters.

Langeveldt said young people were increasingly taking climate action into their own hands as well, citing an online green jobs summit in London she is helping organise in October.

“We want to show politicians things can actually change,” she said.

Rowan Riley, 29, a London architect at the protest, agreed, saying he was now part of the London Energy Transformation Initiative, working on changing building design and regulation with climate change and renewable energy in mind.

“We have to find other ways to influence things. It’s not always about the numbers at protests,” he said.

Carrying a “Grandparents and Elders” flag at the London march, Pat Farrington, 78, said she wanted to see governments “take everything more seriously”.

That should include training more young people for green jobs like installing insulation or solar panels, and doing more to help the public understand the potential economic benefits of a climate-smart transition.

“Right now, people say, ‘I can’t afford a posh electric car’, and they feel their pockets are being picked,” she said.