WURTSBORO, N.Y. — Two hundred years ago, when the Catskill region was among the cider-making centers of the adolescent United States, more than 14,000 varieties of apples had been identified growing in the Northeast.

But by the mid-20th century, that number had dwindled into the double digits. And in 2008, when Andy Crown Brennan and his wife, Polly Giragosian, bought an old farmhouse and land with the intention of planting an orchard here in Sullivan County in the Catskills, near the old Delaware & Hudson Canal, they were told by the Cornell Cooperative Extension service that the region’s shallow, blue-slate soils were not suitable for apples.

Undaunted, they went ahead with their plans, planting neat rows of the commonly used dwarfing rootstocks that keep orchard trees short and easy to pick. Onto these rootstocks, the couple grafted their preferred apple varieties, including New York heirlooms and English and French cider apples, developed for their qualities of high acidity and tannins. As Cornell foresaw, their orchard failed. 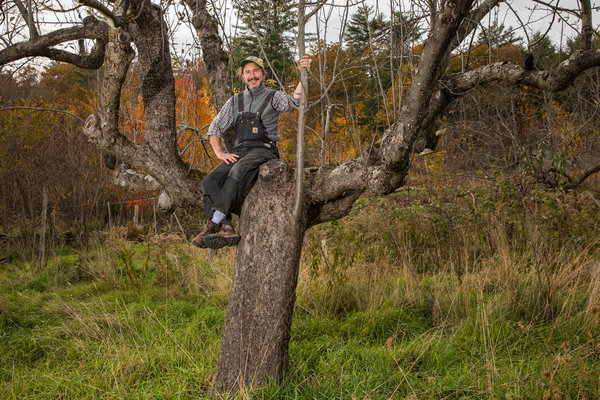 Because dwarfing rootstocks send out only shallow root systems, they need to be staked, so the trees don’t collapse under their own weight. The trees need to be sprayed for pests and rot, because their immune systems are weak. Surrounding ground must be cleared because the trees, robbed of genetic diversity through years of cloning, cannot compete with grasses, weeds and other trees.

That’s how most modern American orchards are managed.

“These trees can’t survive in the wild,” Mr. Brennan said. “That’s why apples are the most sprayed crop in America.”

Still, Mr. Brennan, an avid hiker, discovered something peculiar about his area: Sullivan County, despite what Cornell said, was full of apple trees. Some, judging by their orderly arrangements, had once been cultivated in orchards. But others were just as clearly wild, most likely grown from seeds deposited, as nature intended, by animals that had eaten apples.

Without much of a crop of his own, Mr. Brennan foraged, collecting these myriad unidentified varieties of apples and using them to make a brilliant series of what he called Homestead Locational Ciders, produced at his Aaron Burr Cidery here in Wurtsboro.

Mr. Brennan’s story is one of many in the fascinating rebirth of cider production within a couple of hours of New York City. Some producers, like Mr. Brennan, are foraging in unlikely areas.

Erik Longabardi is based in Roslyn, N.Y., in quintessentially suburban Nassau County. Yet he has found and gathered wild apples from sometimes solitary trees sprinkled throughout the county’s bedroom communities, and has made a set of beautiful still ciders under the label Floral Terranes.

More cideries are in the Hudson Valley, a historic apple-growing area east of the Shawangunk Ridge, which separates the valley from the Catskills to the west. Most are focusing on heirloom varieties and European cider apples from established orchards rather than foraging.

They include Josh Morgenthau, who in 2016 established Treasury Cider at his family’s Fishkill Farms in Hopewell Junction, N.Y., and Andrew Emig and Carolyn and Karl duHoffmann, who collaborated to make apple brandies, then teamed with Jeff Soons of Soons Orchard in New Hampton, N.Y., to create Orchard Hill, which makes ciders from Soons apples.

All share a deep-seated desire to understand the traditions, nuances and complexities of apples and ciders. They are the latest wave of a great cider revival in the Northeast, reaching through New England, out to the Finger Lakes in western New York, and down through the Appalachians.

For anyone used to most commercial ciders, which are often made from concentrate, sweetened and sometimes flavored, these serious ciders are a revelation. They are mostly bone dry, with the flavors of apples and of the region. Apples, too, it turns out, express a sense of place, what wine lovers call terroir.

Mr. Brennan prefers the term “locational” to terroir. He makes 12 different locational ciders, though not all of them every year.

“We let the elements of the locations express themselves through the ciders,” he said, as we walked a grassy path curling up a ridge above his farmhouse.

Each of the 300 trees he planted in his original effort 10 years ago has now been grafted over to the sort of wild apples he has foraged. He has also strewed an estimated 100,000 seeds over his ridge, confident that they will in a decade produce the sort of tannic, tart apples that once made great cider.

“I’m trying to create not an orchard, but an apple hillside,” he said.

The trees grown from seed, he hopes, will be well adapted to survive in the area. The apples from such trees are a gnarly bunch, small and oddly shaped with lumps and discolored spots. The skins are astringent with tannins, and the fruit powerfully tart.

Mr. Brennan minces no words. “These apples are disgusting to eat, and the cider is disgusting to drink, at least for the first six months or so,” he said. “But they age, and get better and better.”

A cider made from apples gathered in Mamakating Hollow in 2017 is intense and pure, herbal and lightly tannic, with a gentle, minty aftertaste. A slightly older Shawangunk Ridge cider — “two miles away by crow,” Mr. Brennan said — is completely different, with an almost piercing apple flavor, tempered by an underlying umami, almost cheesy element.

Needless to say, these ciders and almost all the ciders I tasted would go beautifully with the fall harvest dinner otherwise known as Thanksgiving. Most range from roughly 7 to 9 percent alcohol, much less than the typical 12 to 14 percent of wine, for those concerned with overdoing it.

Over in the Hudson Valley, nobody doubts the suitability of the region to apples. Mr. Soons, whose family has grown apples for more than a century, believes it is among the best regions in the country for the fruit.

“It’s the nature of the soils,” he said, “very old, very rocky, decent natural pH and drainage. Apples like them, and the climate is right.”

Most apples, at least. Over the last few years, Mr. Soons has added almost five acres of English cider apples, which, as he and others have learned, are not so well adapted to the Hudson Valley. They are particularly susceptible to fire blight, a withering bacterial disease.

With the English apples they were able to harvest in 2017, Orchard Hill made Bitters and Sharps, which is still aging at the cidery, but is taut, tart and lip-smacking, with great freshness and energy. Another cider, Gold Label, is gently sweet but well-balanced and refreshing. Orchard Hill also makes Ten66 Pommeau, a blend of apple brandy and juice that tastes like a buttery caramel apple. Mixed with tonic, it would make a fine Thanksgiving aperitif.

Mr. Morgenthau at Fishkill Farms and Treasury Cider, too, has faced challenges growing European cider apples. When he returned to his family farm in 2008 with a degree in fine arts, he had intended to practice landscape painting. Instead, he fell in love with farming and apples.

Fishkill was purchased in 1913 by his grandfather Henry Morgenthau Jr., who went on to serve as Treasury secretary under President Franklin D. Roosevelt. His son Robert Morgenthau kept the farm going even as he served from 1975 until 2009 as district attorney in Manhattan, and his son Josh Morgenthau is now in charge.

Coincidentally, Mr. Brennan, too, has a famous forebear, William J. Brennan Jr., who was an associate justice of the Supreme Court from 1956 to 1990, but with little apparent interest in farming.

Fishkill Farms has many old workhorse varieties like golden delicious and McIntosh, planted decades ago, among its 70 acres of apples. When Josh Morgenthau arrived, he took it upon himself to plant local heirloom varieties like Ashmead’s kernel, golden russet, Newtown pippin and Esopus Spitzenburg, all of which make for delicious eating. Only belatedly did Mr. Morgenthau realize he had planted great cider apples as well.

He started to make commercial cider in 2016, after two spring frosts in the last five years killed off a sizable portion of his crop, which Mr. Morgenthau said buds earlier than it once did.

“If we were going to have the crop wiped out periodically, I thought we could take a bumper crop like 2015 and make cider with extra apples to tide us over,” he said. He named his cider Treasury in homage to his grandfather.

All the Treasury ciders are made from blends of apples. They all come from the estate orchard, yet each is quite different. The 2016 Onda is bone dry., with lush, ripe apple aromas and a citrus edge. The Burr Knot seems more spicy and exotic, while the Farmer’s Hotel is savory, pure, rich and deliciously austere.

Like many cider producers, Mr. Morgenthau believes that a diversity of apples makes a better, more interesting cider than would a single variety.

“Most apples just take to a blend better,” he said. “Diversity is part of the tradition.”

A little like Mr. Brennan, Mr. Morgenthau recently gathered seeds from some of his favorite cider apples and planted 2,000 in a field. He plans to let them grow and see what develops, hoping they will turn into hardy, well-adapted trees. Each one growing from a seed rather than a cutting will be different, and perhaps from this greater genetic diversity, Hudson Valley cider will truly be reborn.

“Great cider is not about the variety,” Mr. Brennan said. “It’s just about a tree making its way in the world. That’s what you taste.”

Great ciders are now made all over the Northeast. These five small producers all work in proximity to New York City.

Aaron Burr Cider Its “locational ciders” are wonderful, as are the blends of cider with traminette wine or elderberry wine, $15 to $22.

Sundström Cider Deep, complex and floral; worth decanting to soften the aggressive carbonation, $16 to $17. 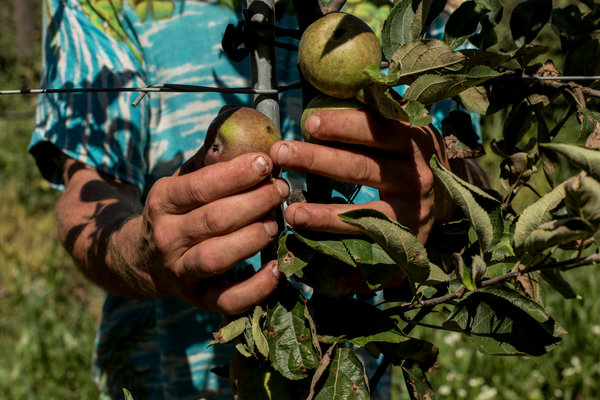 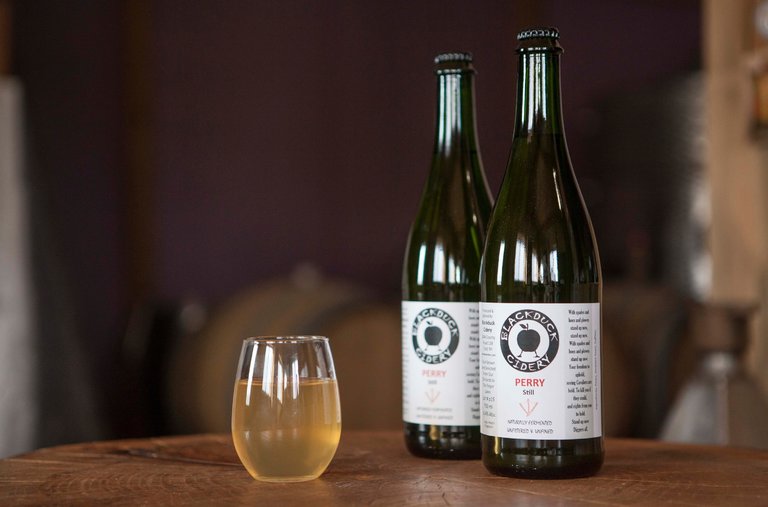