A welcome break, Theresa? Prime Minister’s security team shut down the ladies’ loos at services on the M54 for several minutes so she could ‘freshen up’ en route to her Welsh walking holiday

Theresa May left motorists stunned when she stopped at a a service station on the way to her Easter break in Wales.

The Prime Minister stopped at the Welcome Break on the M54 in Shifnal, Shropshire on Saturday as she and Philip made their way for a walking holiday in one of their favourite parts of the British Isles.

Witnesses said the ladies loos were declared ‘out of bounds’ to the public as she ‘freshened up’ for several minutes as they arrived at lunchtime.

The normally smartly-dressed Prime Minister was dressed down in a casual black waterproof coat with jeans  – but with  trademark leopard print trainers – as she enjoyed a break from Parliament.

Delivery driver Jake Garbett, 23, said he had to double take when he spotted Mrs May walking past the shops and a Starbucks to use the toilet.

She then walked back out with her entourage to a waiting Jaguar with husband Philip before she carried on with her journey. 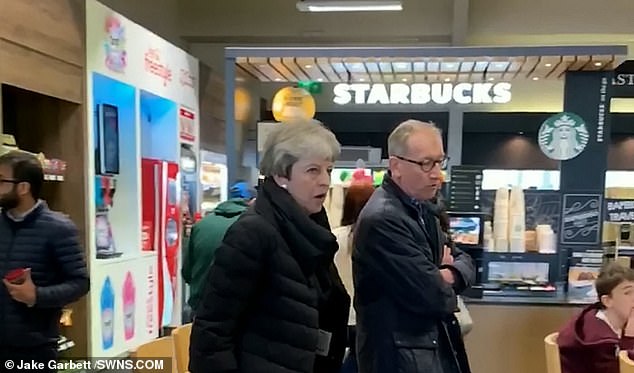 Coffee break? Theresa May (pictured atr the weekend with husband Philip) would be forgiven for needing a coffee or two after a punishing routine in recent months as she battled – unsuccessfully – to get a Brexit deal through Parliament 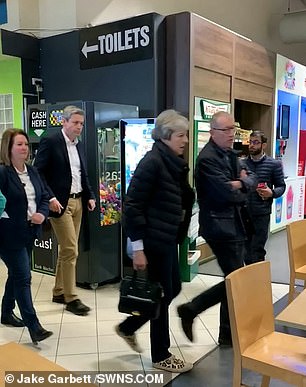 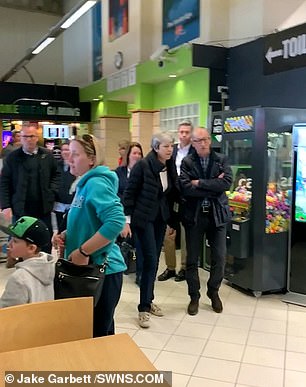 Mr Garbett, from nearby Telford, said the PM also visited WH Smith before the toilet was closed off to members of the public.

He said: ‘We popped into the services quickly for a drink and my girlfriend had gone back to the car to check on our dog.

‘I saw this woman and thought ‘is that the Prime Minister?’ 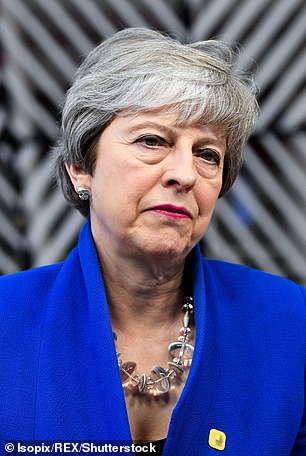 Mrs May, pictured at last week’s EU summit in Brussels, is known for her style choices

‘Then I noticed about four blokes with her and one was talking into his collar. That was a giveaway that it was Theresa May

‘She was not looking at anyone else she was just walking with her husband.

‘She walked out of the toilets and her and Philip were walking side by side.

‘People were wondering why the women’s toilets were closed – they did not know what was happening.

‘I think I was the first one to spot her – my girlfriend was in the car and when I showed her the video she was like ‘Oh my God – that’s her.

‘I saw her going into one of the shops I think it must have been WH Smith and I’m guessing she could have been on her way to Wales.

Downing Street today confirmed Mrs May began her holiday on Saturday in the principality. No further details were given.

In 2017 during a walking holiday in Snowdonia, Mrs May decided to call a snap general election only to see her Commons majority wiped out.

Asked whether she was considering another election, her spokesman replied: ‘No.’