An Aboriginal man says police officers threw him off his bicycle, pinned him to the ground and called him a "black c—" while he was riding to work at dawn without his bike lights on.

Korey Penny, a Western Australian who works on Melbourne's Metro Tunnel project, said he wanted Victoria Police to be held accountable for the incident that hospitalised him, which he said would never have happened to "white guy in a suit". 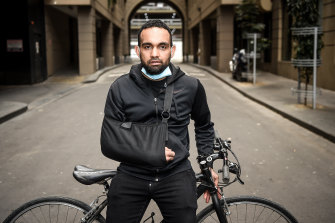 Korey Penny, an Aboriginal man from Western Australia working on Melbourne’s Metro Tunnel project, says he was violently attacked by police while riding to work on his bike. Credit:Justin McManus

The Australian Workers Union, which represents tunnellers on the rail project, has referred the matter to anti-corruption investigators.

Mr Penny's lawyer says police "violently assaulted" and "racially vilified" his client. However, police say they do not believe excessive force was used during the arrest.

The 32-year-old father of two, a Menang man from the Noongar nation in south-west WA, said he was riding along St Kilda Road to get to his shift at the Metro Tunnel soon after 5am on Thursday, when he was told by a police officer to get off his bike.

Mr Penny said he only had time to look at the officer before he was "spear tackled" to the ground and landed on his arm, opposite the Shrine of Remembrance. Victoria Police confirmed the officer's body camera wasn't turned on. The incident is believed to have been captured on CCTV.

Mr Penny said he complained to the officer that his arm hurt while he was pinned to the ground, and when he was let go, crawled to his bike, circled by an estimated 12 officers. The husband and father of two claims he still hadn’t been told why he had been targeted by police. "I didn’t even know what was going on."

He said he asked the officers to call a doctor, yet they refused to help him get off the ground. After he managed to stand up and call his boss, Mr Penny said he was grabbed and pushed against a wall and his clothes and bag were searched. "I said, 'You always do this to Aboriginal people', I told them 'I'm from WA' and they said 'You're not in WA now, you black c—'."

When an ambulance arrived, Mr Penny said he was told by police that he was being fined for riding without his bike lights on.

Mr Penny said on Friday that his arm was numb, swollen and in a sling. The tunneller said he had taken two days off work as a result of the injury and did not know when he would be fit enough to return. He said his bike had been written off. 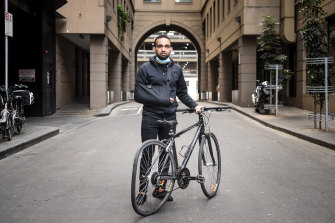 "Even though they wear a badge, they're still accountable for their actions," he said of the officers involved. "They can't do whatever they want. If I was a white guy in a suit, I would still be riding my bike."

A Victoria Police spokeswoman confirmed a 32-year-old man would be charged on summons for failing to stop on police request and riding a bicycle on the footpath without a light at night.

"At this stage we are satisfied with the use of force in relation to this incident," the spokeswoman said. "The police members involved in this incident were not aware of the man’s ethnicity until it was later confirmed after they had a verbal interaction with him."

When asked if the officers' body cameras were turned on, a Victoria Police spokeswoman said: "Due to the dynamic nature of the incident, the officer was not able to activate his body-worn camera at the time," in reference to the first policeman who stopped Mr Penny.

The Australian Workers Union, representing tunnellers on the rail project, referred the matter to the Independent Broad-Based Anti-Corruption Commission, which is auditing Victoria Police's handling of complaints by Aboriginal people. "His only crime was to be riding a pushbike to work. This has to stop," the union's Victorian secretary Ben Davis said.

Robinson Gill Lawyers principal lawyer Jeremy King, who is representing Mr Penny, said police undoubtedly used "excessive force" and called for those responsible to be disciplined and for IBAC to investigate immediately. "Kory has been violently assaulted by Victoria Police and racially vilified. Victoria Police have a lot of questions to answer."

This is the most recent accusation of alleged police brutality against Indigenous people in Victoria and comes amid a surge of activism sparked by the Black Lives Matter movement in Australia and internationally.

In 2016, Melbourne teenager Tommy Lovett was arrested, beaten and capsicum sprayed by police looking for a man more than twice his age. Last week, Victoria’s Director of Public Prosecutions decided it would not prosecute police officers involved in the 2017 death of Yorta Yorta woman Tanya Day in custody.

Our weekly newsletter will deliver expert analysis of the race to the White House from our US correspondent Matthew Knott. Coming soon. Sign up now for The Sydney Morning Herald‘s newsletter here, The Age‘s here, Brisbane Times‘ here and WAtoday‘s here.