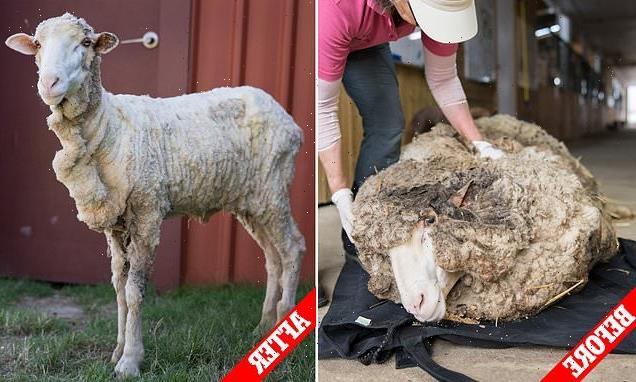 A new ewe! Absurdly fluffy sheep who was so weighed down by his 40kg fleece he couldn’t STAND gets a life-saving makeover

An absurdly fluffy sheep who couldn’t stand because he was weighed down by his 40kg coat has a ‘new fleece on life’ as he’s finally shorn by rescuers.

Bushwalkers stumbled upon the struggling sheep on top of Mt Alexander in Central Victoria recently and promptly contacted an animal sanctuary for help.

The sheep, named Alex, had been unable to stand for some time and was in critical condition.

Alex might just be the world’s most famous sheep right now! His rescue video has now been seen by over 160 million people. 🙌 Since being relieved of his burdensome 40kg fleece he has been settling into sanctuary life, grazing contently with his new buddies, Chloe and Molly Brown. 🐑❤️ #friendsnotfood #animalrescue #farmsanctuary #animallover #rescueanimals #sheep

‘I’m not sure how long the poor fellow had been lying there,’ she said.

‘But I do know that, judging by the length of his fleece, he had not been shorn in many a year, and had he not been found when he was, he would have passed from this world.’

Rescuers raced to rid Alex of his overgrown coat.

Volunteers had to hand-fed the sheep and give him water as his matted wool prevented him from lifting his head.

It took the strength of four adults to carry the motionless sheep out of his rescue van. 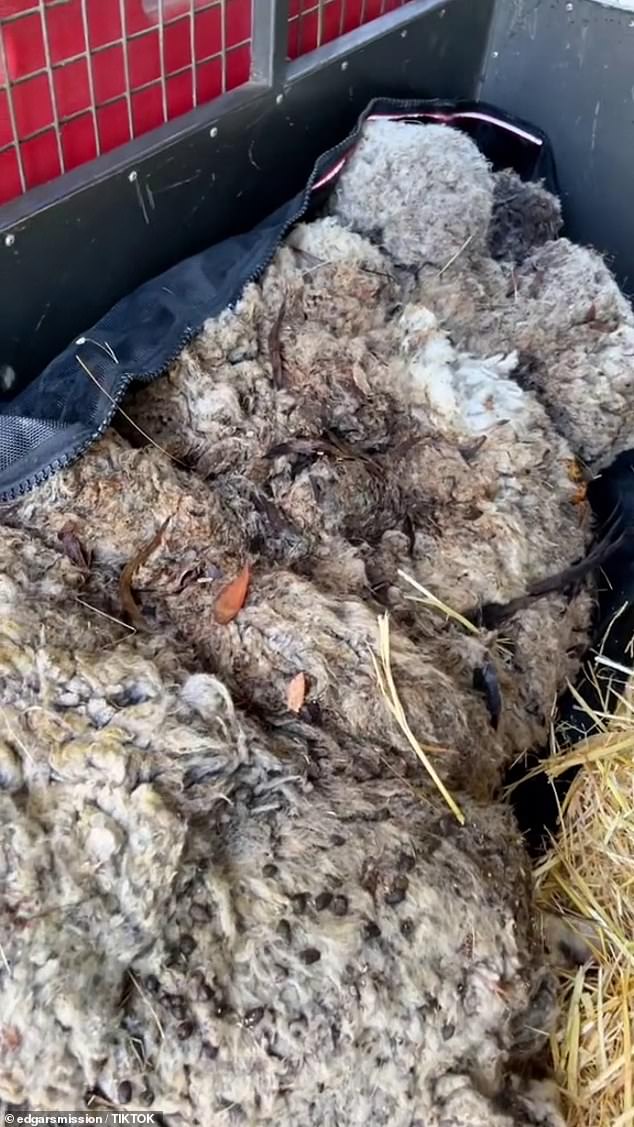 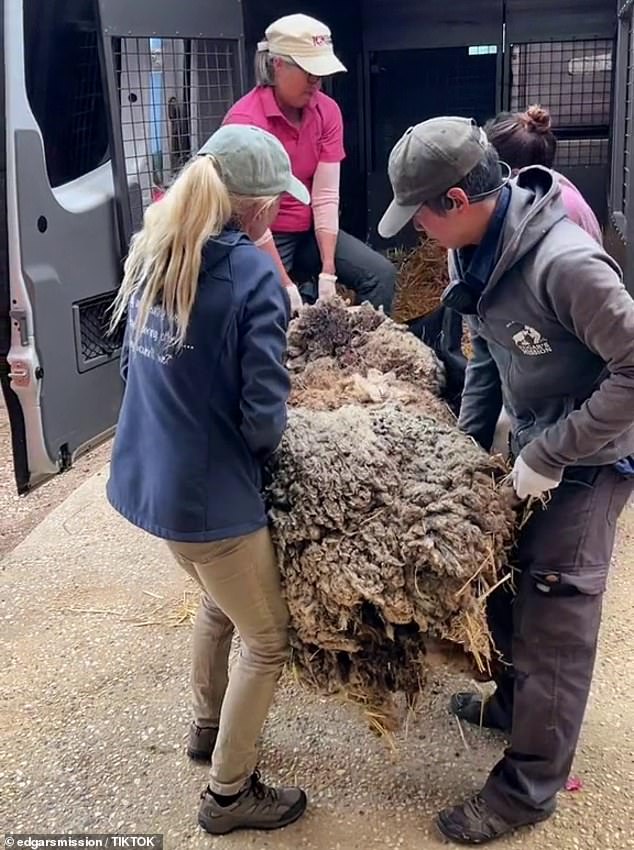 Ms Ahern had to call in an expert shearer as the sheep’s wool was so matted she couldn’t even part it to inject him with fluids.

A 40 kilogram (88lbs) pile of urine-soaked, twig-matted and insect-encrusted fleece was removed from the feeble animal.

When finished, Alex was finally able to stand on his wobbly legs. He’s now recovering on the 153 acre sanctuary in Lancefield, Australia. 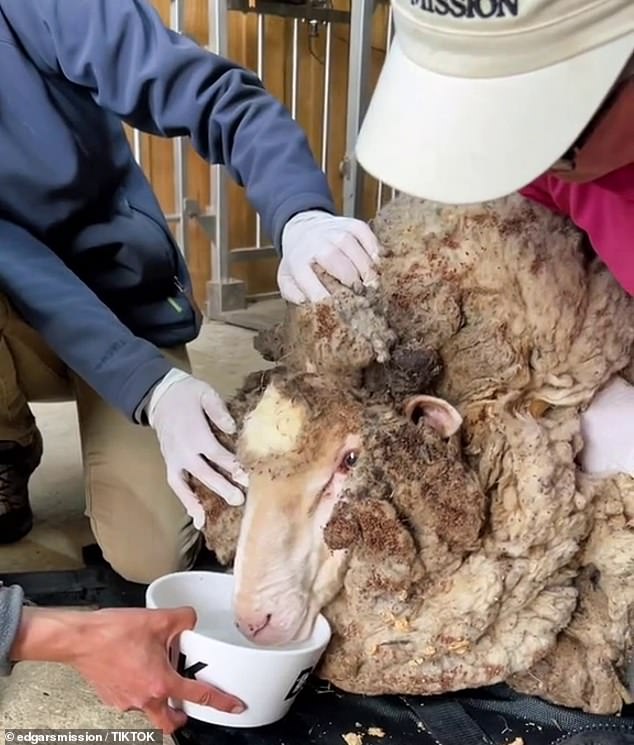 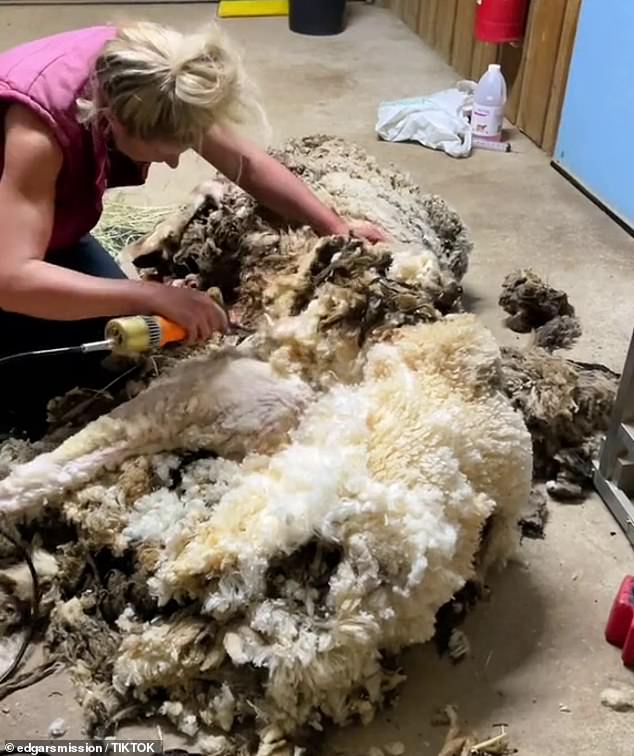 The extraordinary mass was close to breaking the Guinness World Record for the heaviest fleece – a title held by Chris the sheep, from Canberra, who in 2015 had a 41 kilogram coat.

Alex is not the first sheep the Edgar Mission has seen carrying the weight of wool on its shoulders.

The sanctuary rescued Baarack the sheep in February last year after he was found roaming the mountains with a 34.5 kilogram fleece.

Both Alex and Baarack were both wethers (castrated male sheep) around seven years of age and would normally self-shed.

However, due to selective breeding some types of sheep no longer self-shed and need to be shorn at least once a year. 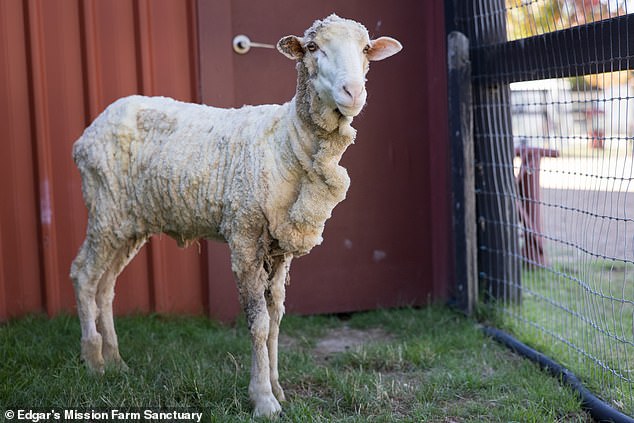 Alex is now recovering on the 153 acre non-for-profit sanctuary in Lancefield, Australia

The not-for-profit sanctuary shared video of his life-saving transformation on TikTok which has received more than 150,000 views.

Viewers were quick to praise the sanctuary’s efforts and express their love for Alex the sheep.

‘You guys [Edgar’s Mission] were born with a place in heaven,’ one user wrote.

‘Not to be dramatic but I would die for Alex,’ another commented.