The fearless faces of acid attack survivors: From unwanted step-children to wives who did not give birth to a son, brave Indian women highlight their plight to stop others sharing their fate

These are the brave faces of India’s acid attack survivors who have refused to be victims.

Some of them were attacked by jealous family members, others by men who wanted to punish them for rejecting their advances, but they have all suffered disfigurement after having corrosive liquid thrown in their faces.

Together they set up a campaign called STOP ACID ATTACKS, which started in Delhi, but has now spread across India.

In sharing their stories with photographer Pascal Mannaerts, they hope to raise awareness of their campaign, and help other women suffering the same fate.

Mr Mannaerts says: ‘The girls don’t want to hide. They design clothes, they opened a café-restaurant in Agra. They want to smile and have different life projects.

‘They also interact with other minorities as rape victims, LGBT communities, old people abandoned by their families, sharing their strength and experience. They refuse to be called “victims” but prefer the term “fighters”.’ 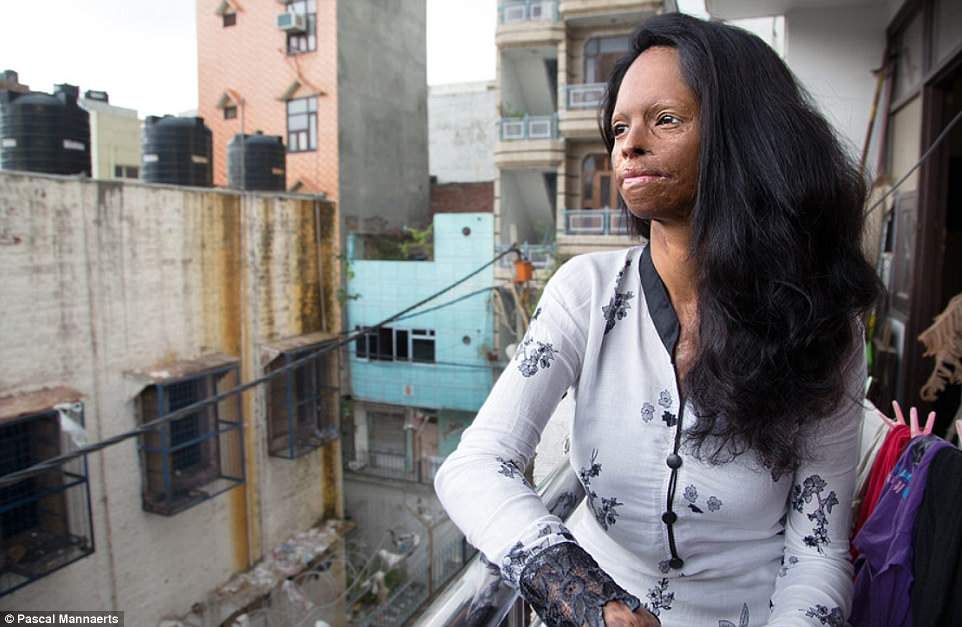 Her story: Laxmi, 24, was just 15 when a man more than twice her age threw acid on her when after she refused his advances. She described how she had been approached by the man, a brother of a friend who was 32, who started sending her text messages. ‘He messaged me: I love you. I ignored him, but the next day, he messaged me again, saying that he wanted an instant reply. Again, I didn’t respond. Three days later, I was waiting for the bus in a crowded area of central Delhi. He approached me with his brother’s girlfriend. Before I realized anything, they had pinned me down and threw acid on my face. I kept screaming for help but no one came to help me. Everyone ran in the opposite direction. I could feel my flesh burning and I covered my eyes with my arms. That reflex action saved me from losing my vision. Acid corrodes quickly. Within a few seconds, I had lost my face, my ear had melted and both my arms were charred black.’ After ten weeks she was released from hospital and has had numerous operations since. ‘I learnt to live with the physical pain but what hurt more was the reaction of society. My own relatives stopped seeing me, as did my friends. I stayed indoors almost all the time for eight years. My main attacker was out on bail within a month and he soon got married. He returned to a normal life within a month. I tried to pick up a job but nobody was willing to hire me. Nobody wants to hire acid victims because of the way they look.’ 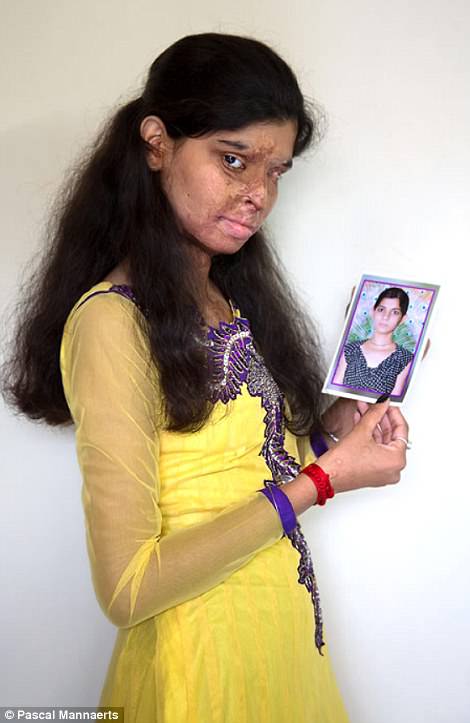 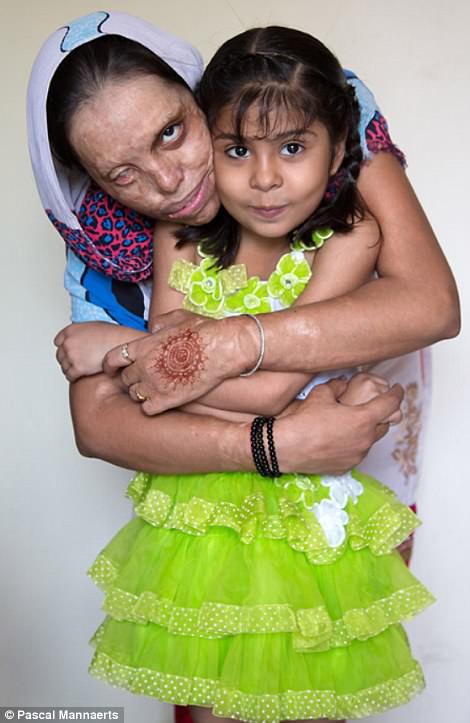 Attacked: Ritu, 20, left, had acid poured on her after her aunt ordered an attack in revenge over a family dispute in 2012. ‘There were some property matters between my father and his sister. My aunt couldn’t have revenge on my father, so she decided to have a revenge on me. She asked guys to attack me. Two men approached me on a motorbike. One of them splashed acid on me. Shopkeepers gathered around me as I was lying on the ground, screaming with pain. But nobody helped me. Fortunately, my elder brother was passing by. He spotted me and brought me to the hospital.’ Soniya Choudhari, 30,  right, was attacked in 2004 by two neighbours after a dispute. ‘They helped me buy a cellphone, but it was a stolen one. I sent the police to them. They were angry as the police jailed them for a while. They had also stolen something from my father’s shop before. They got more and more angry at us, that’s why they did that. The two guys were sentenced to 6 months jail only. 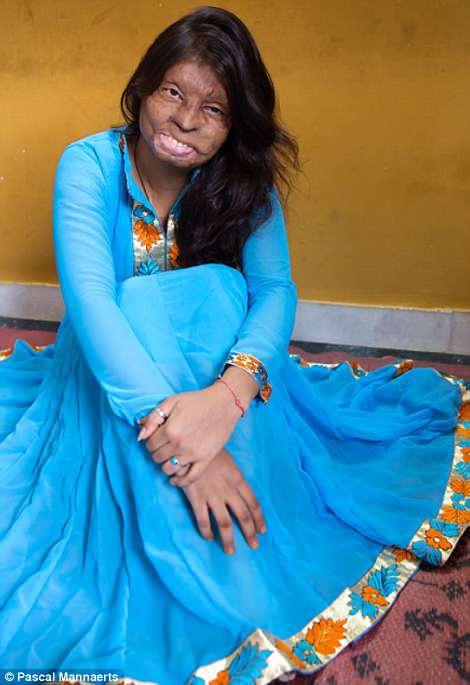 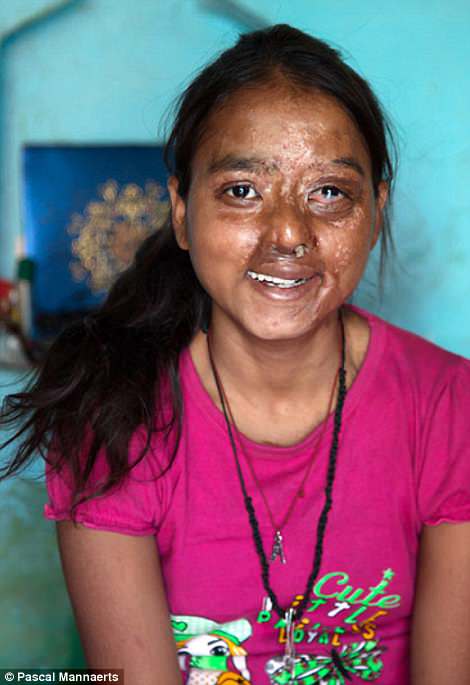 Heartbreaking: After her mother’s death, Rupa, left, was living with her stepmother in her native village in Uttar Pradesh. Her stepmother didn’t want to take care of her, so one night, she poured acid on Rupa while she was sleeping. Her stepmother left her in bed for six hour before taking her to hospital, where she spent three months. Dolly, right, is 14 years old. She was 12 when she was attacked with acid by a man who was twice her age. He had tried several times to force her to have sex with him. Today, she wants to become a doctor. 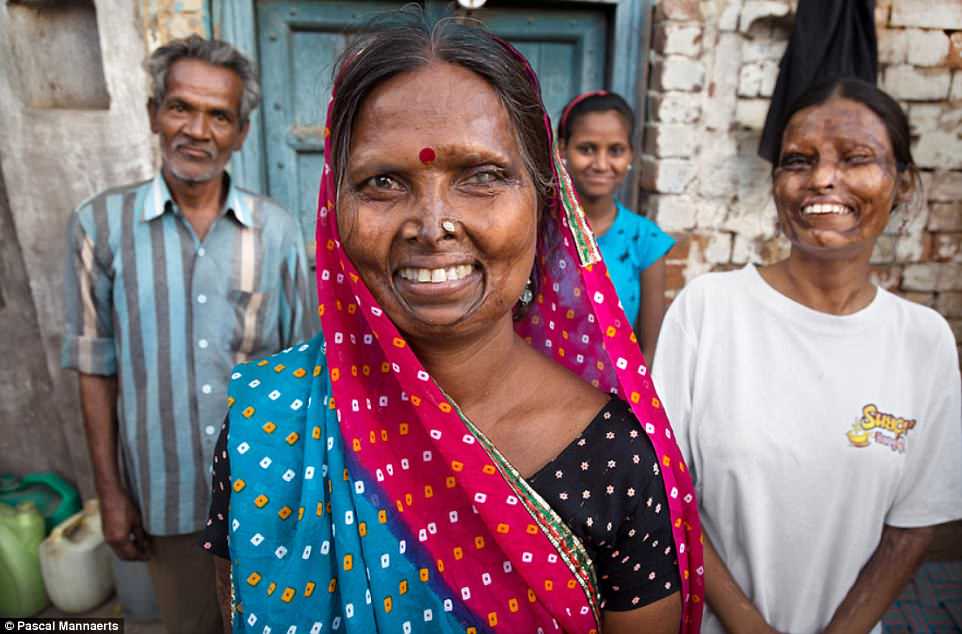 No choice: Gita poses with her husband – who is also her attacker – and her two daughters in Agra. Gita’s husband threw acid on her and their two daughters because she had not given birth to a son. Her youngest daughter died, and her eldest, Nitu, now 24 and seen right, survived.  Gita ended up staying with her husband because she says she had no other option as a woman, and they later had another daughter, seen in the background. 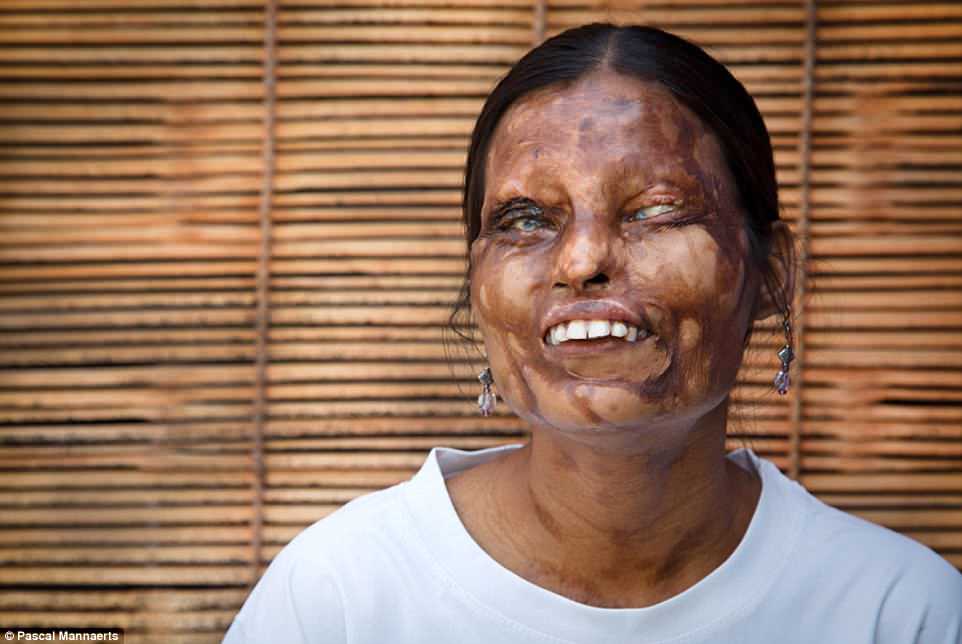 Survivor: Gita’s daughter Nitu, 24, lives in Agra and works at Sheroes Hangout, a café founded by Stop Acid Attacks-members. She dreams of becoming a famous singer one day 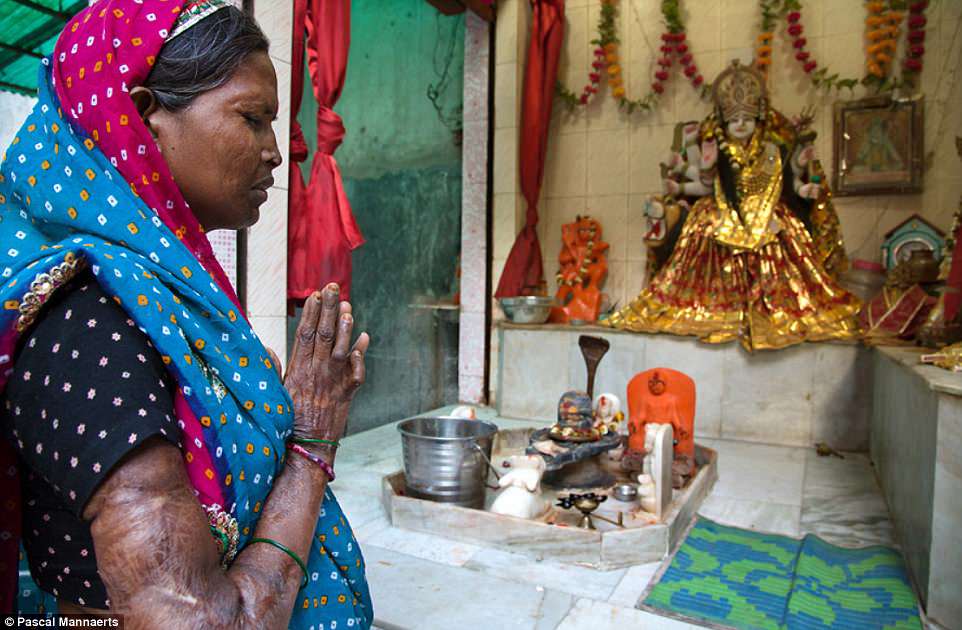 Unimaginable pain: Gita, who lost one of her daughters when her husband threw acid on them more than a decade ago, prays at a temple near her home 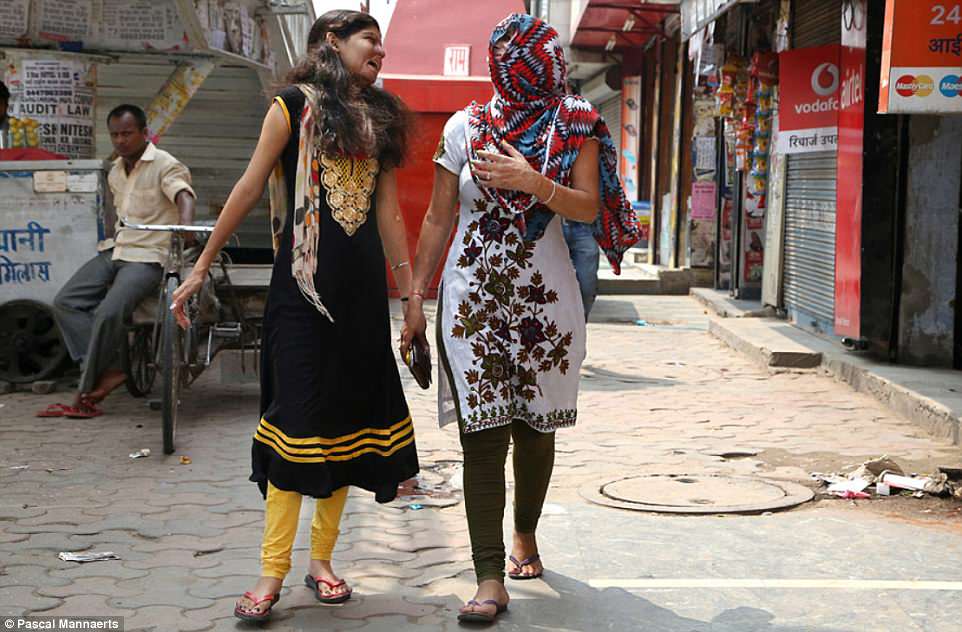 Out and proud: Ritu, pictured with friend and fellow acid attack victim Soniya in north Delhi, says: ‘It is important to know that this is not your fault and that you don’t have to hide. You have to be proud of what you are and become an example of strength, as this will help other people, who have to face the same problems as you.’ 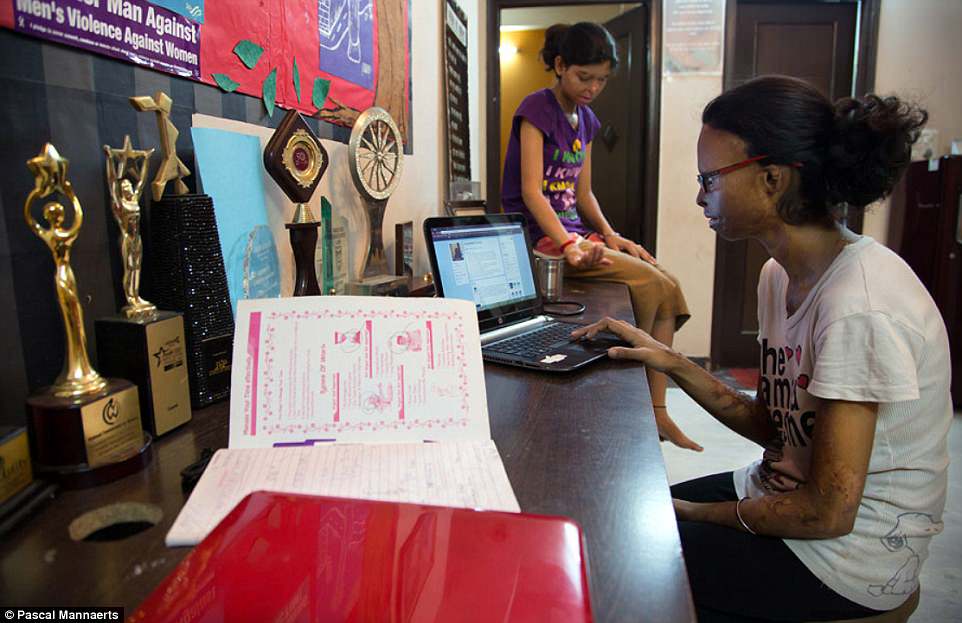 Commitment: Laxmi and Ritu are sitting at the HQ of Stop Acid Attacks – also called Chhanv – a three-room flat in Laxminagar, a middle-class area of east Delhi where acid attacks survivors can meet 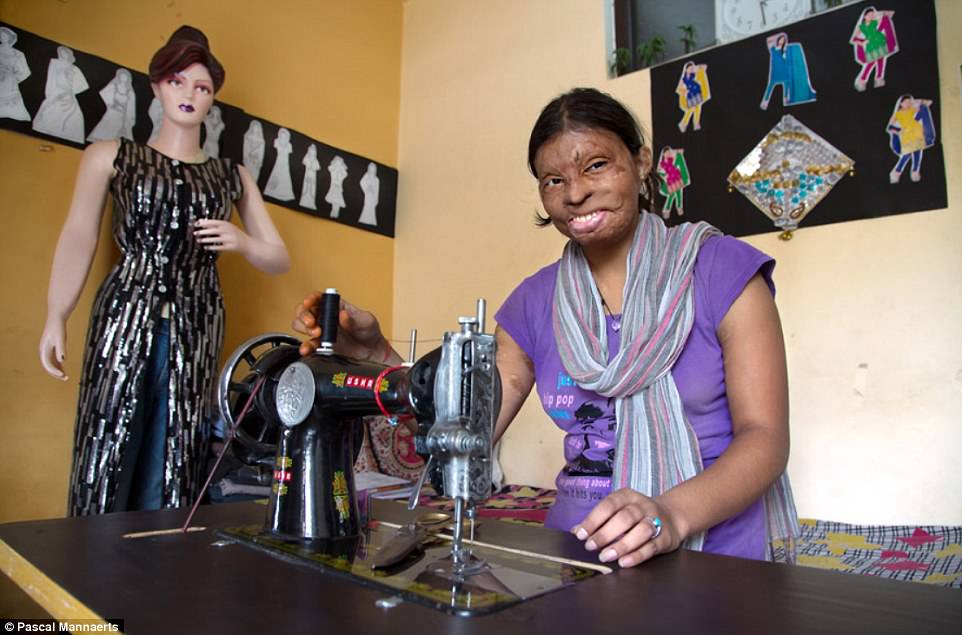 Dreams: Rupa has always wanted to be a fashion designer, and dreams of being able to open her shop in Delhi or Mumbai. At the moment, she designs clothes she sells at Sheroes Hangout 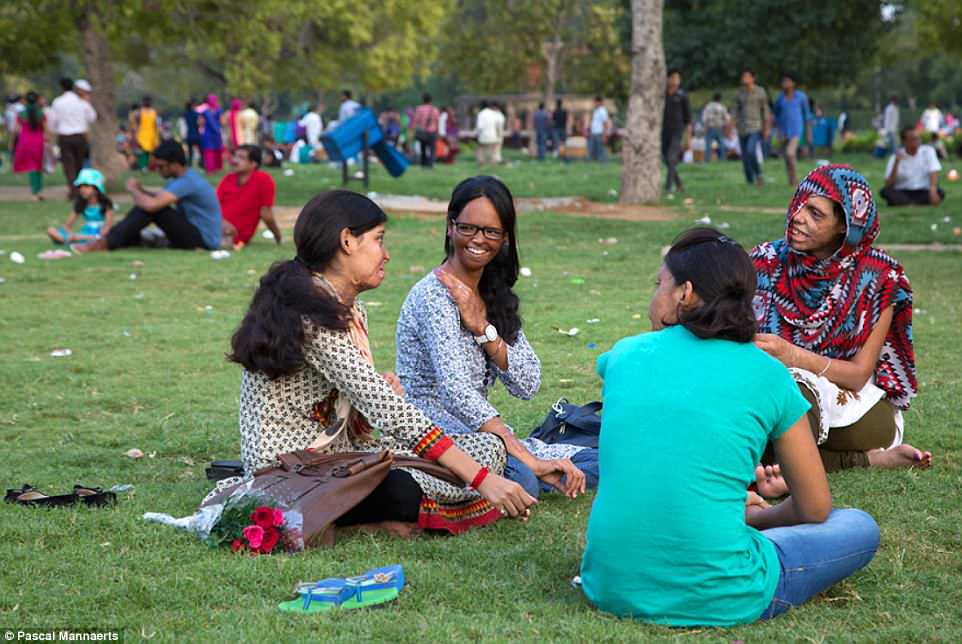 Refusing to hide: Some of the campaigners are spending a chilled Sunday afternoon at the India Gate, in Delhi 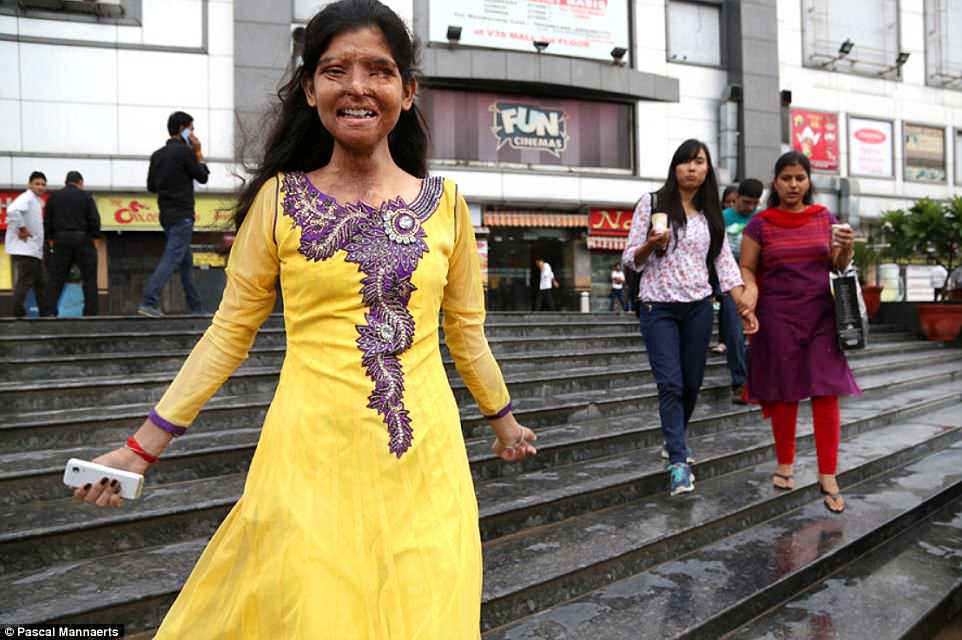 Living in fear: Three of the men accused of the attack on Ritu have been charged with attempt to murder and five others under criminal conspiracy. The Punjab and Haryana High Court has recently granted bail to two of them 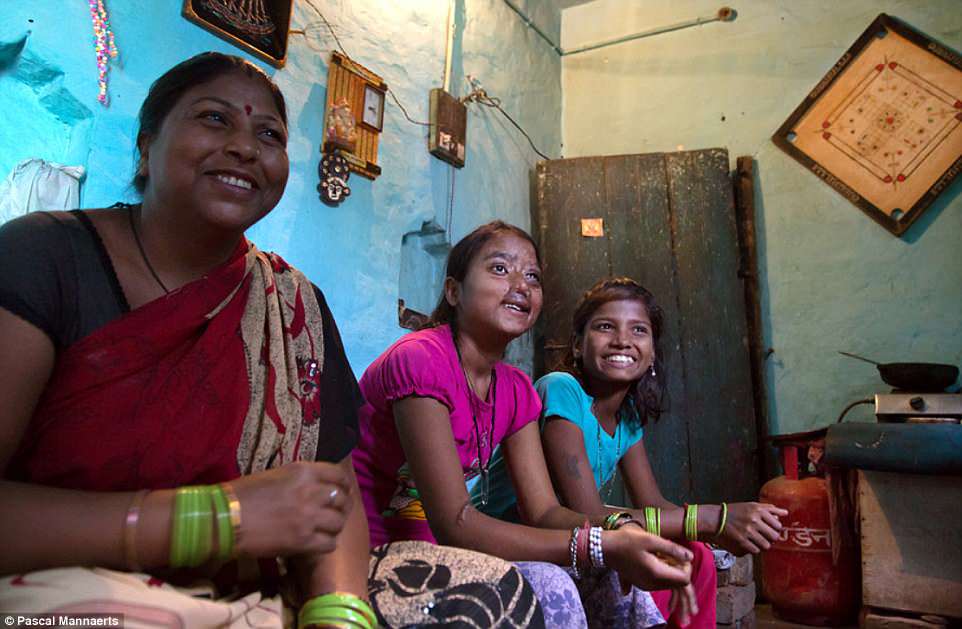 Changed forever: Dolly sits with her mother and sister in their home, as she speaks about her dream of becoming a doctor 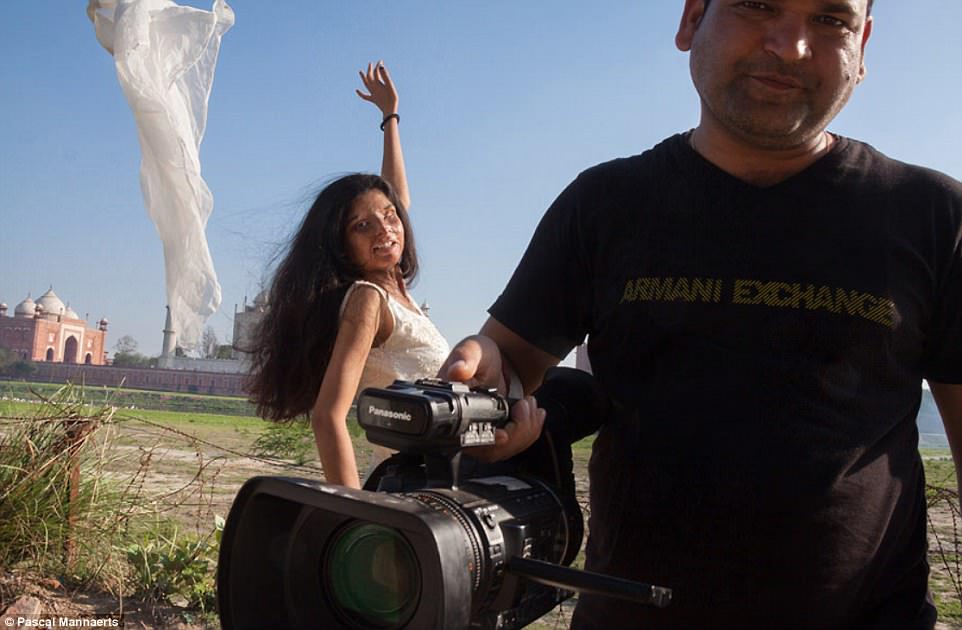 Brave: Ritu, who was attacked when she was just 14 years old by men paid by her own aunt, is seen  shooting a documentary about Stop Acid Attacks f near the Taj Mahal, in 2015 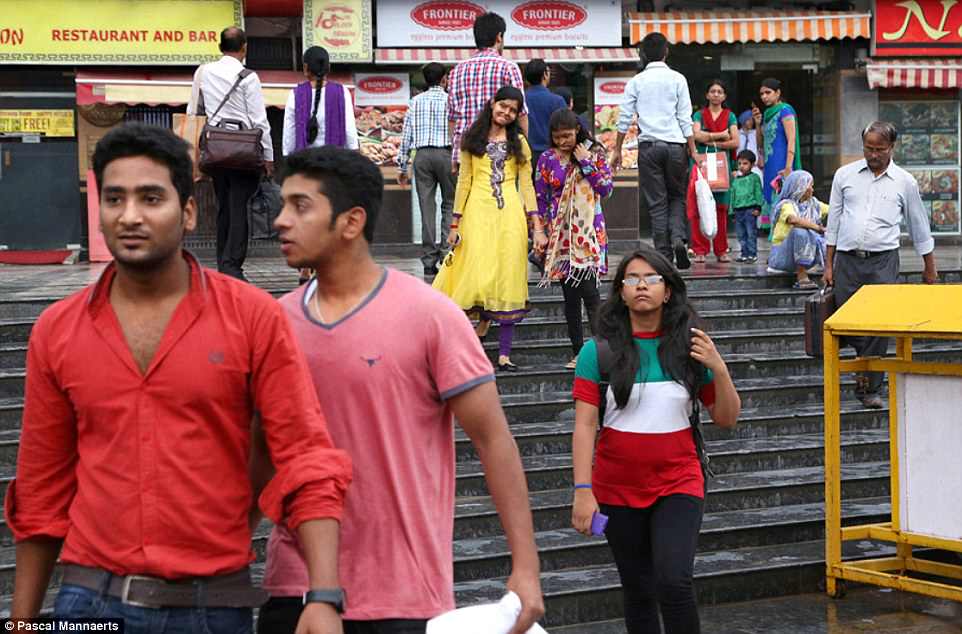 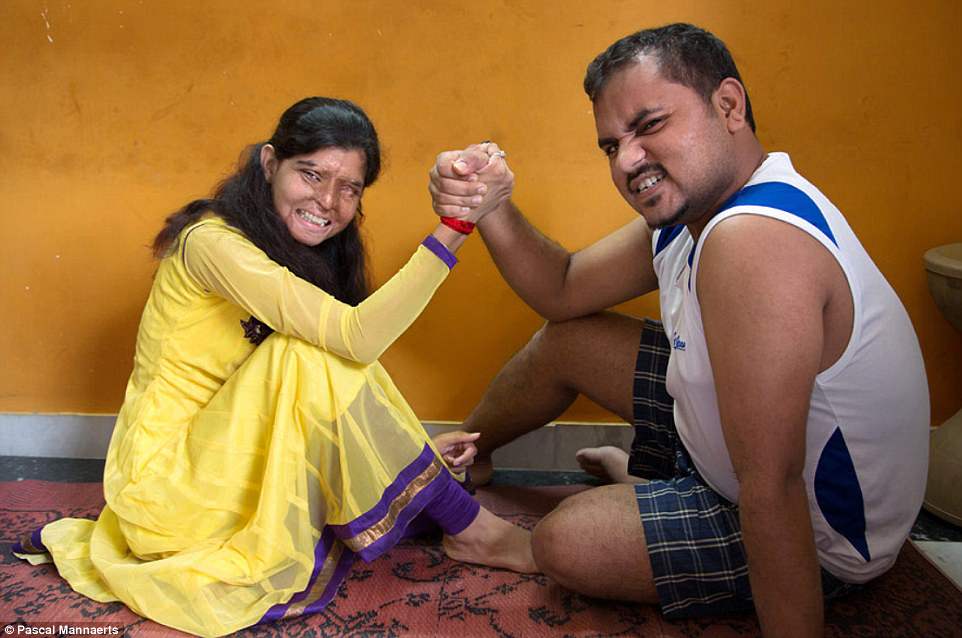 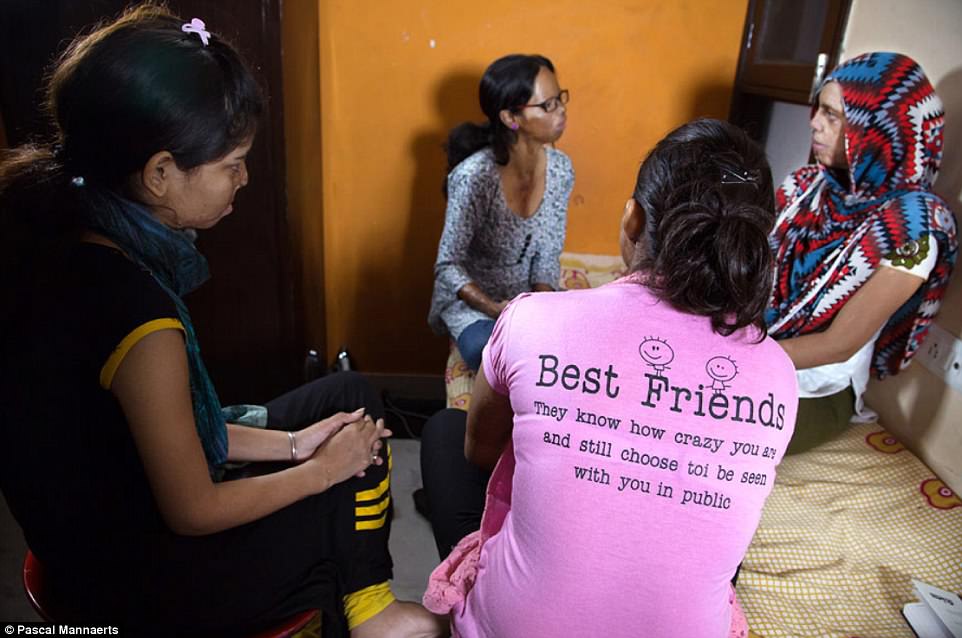 Campaigners:  Ritu, Laxmi, Soniya and Rupa are all members of Stop Acid Attacks and prefer to call themselves fighters, rather than victims 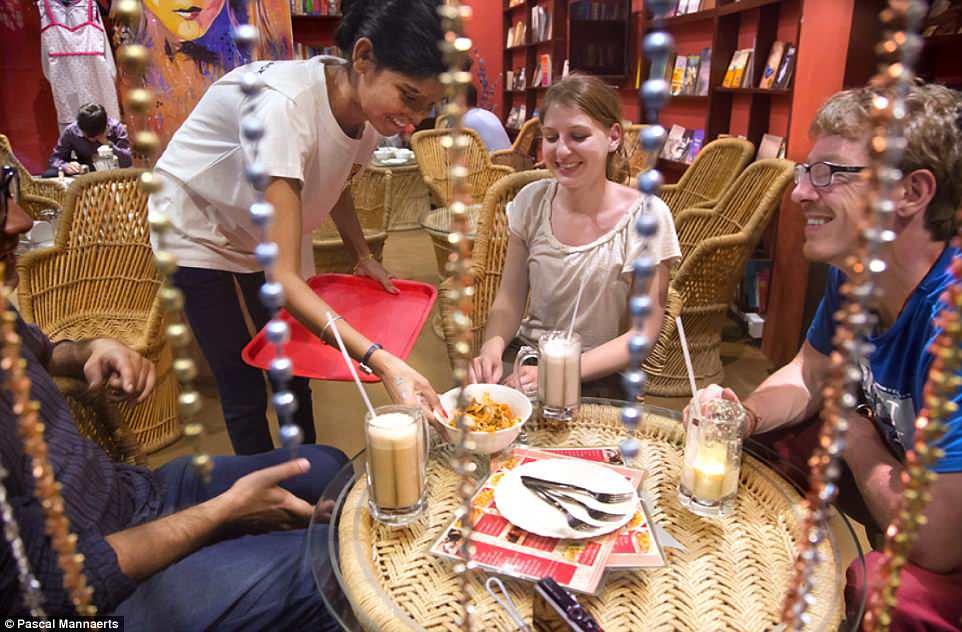