This is the adorable moment a baby elephant won’t let go of a tourist after she became acquainted with him before taking an elephant ride with his mother.

The cute footage was taken in the northern jungle of Thailand in early March and shows American tourist Jane Hight McMurry cuddling a baby elephant as they both lie together on the ground.

The footage begins as the baby elephant is resting his head in McMurry’s lap as she pets him. She then tries to move away but the elephant, seemingly not finished with the attention, wraps his trunk around her leg.

He then playfully bites her foot and holds it in his mouth as she tumbles backwards trying to get away. The playful calf then climbs on top of her and wraps his tusk around her neck as she asks her group, who struggle to contain their giggles, ‘what do I do?’ 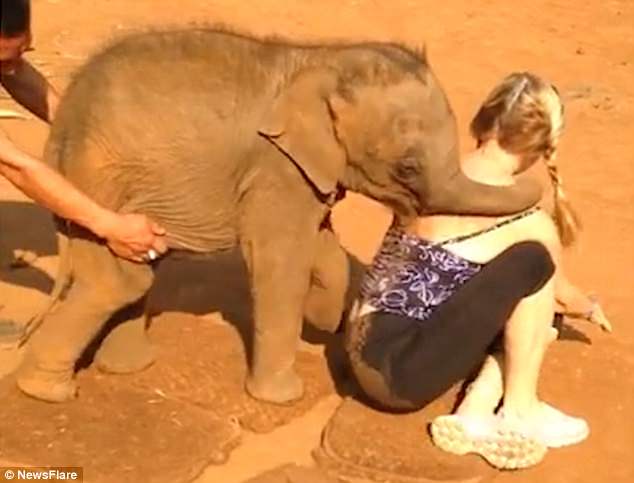 Getting acquainted: The cute baby elephant wraps it’s tusk around McMurry’s neck as she tries to get up and get away from him

McMurry, who presents keynotes and seminars on leadership skills that maximize sales and workplace productivity, said: ‘The elephant chosen for me was a new mother. It was important for me to get to know her calf before we began.

‘As you can see, we got to know each other.’ 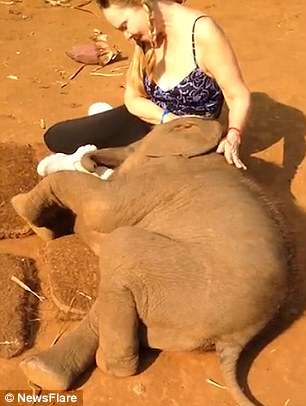 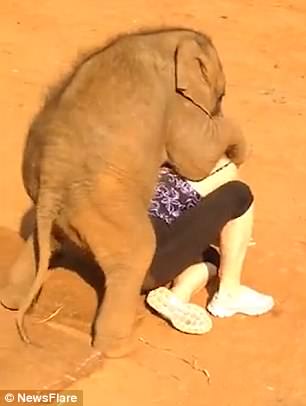 Too close for comfort: The adorable elephant can be seen wrapping itself around the woman in the footage before mounting her

The northern jungle in Thailand is one of the most popular tourist destinations for those who want to spot wild elephants roaming in their natural habitat.